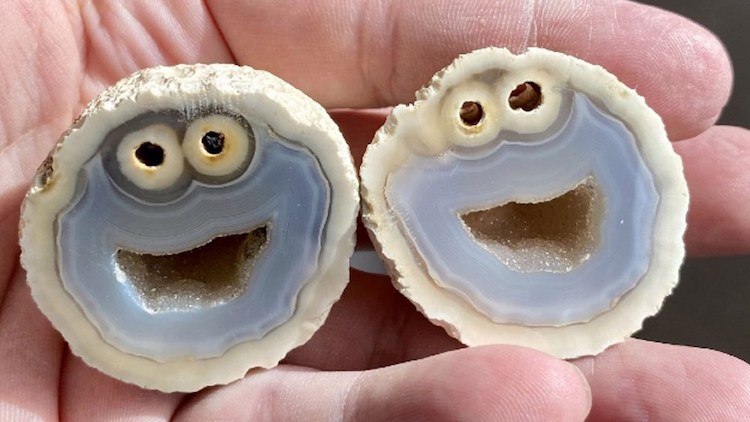 Gems and geodes have ways of surprising us. From rainbow crystals to heart-shaped amethysts, these rocks prove you can never be too sure about what you’ll find when you crack them open. One of the latest unexpected discoveries is a pair of Cookie Monster twins in an agate from Brazil. Gem collector Mike Bowers, with the help of Lucas Fassari, unearthed the rock that the famed Sesame Street character was hiding within. The resemblance to the beloved puppet is uncanny—down to the blue face, goofy grin, and large googly eyes.

The rare Muppet mineral was concealed in a small, egg-shaped volcanic rock. It gave no indication that once split open, there would be two flawless recreations of Cookie Monster clad in sapphire quartz. To announce this fabulous find, Bowers did a reveal video on Instagram set to the now-iconic song “C is for Cookie” sung by the king of confections himself.

For now, Bowers is keeping the Cookie Monsters all to himself. But if and when he does choose to sell the quirky pair, he’s looking at a lot of cookies. Due to the rare stone and the resemblance to the character, people have been willing to pay upwards of $10,000 for a chance to own the set.

Gem collector Mike Bowers revealed a twin pair of Cookie Monsters in an agate from Brazil—to the “C is for Cookie” song, of course!

15+ Gifts for Anyone That Loves Sparkling Geodes and Crystals