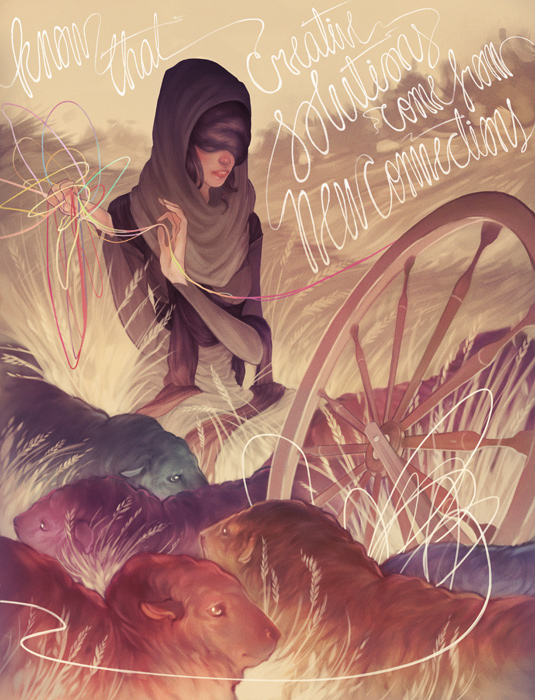 At 23-years-old, Sam Wolfe Connelly doesn't just have an incredible amount of talent, he seems wise beyond his years. The Alexandria, Virginia-born illustrator made this for 1200 Posters. On the 12th of every month for a year, 1200 Posters releases a new limited-edition art print based on a line from Margaret Wheatley's book Turning to One Another.

This month's line is, “Know that creative solutions come from new connections.” Sam Wolfe Connelly illustrated this beautifully and then wrote this about his piece.

“When I think about creating art, I always see it as a solitary process. Something that is solely between the creator and the created; a relationship that requires itself to be detached from anything else in your life. However, in order to create, you need the drive and you need the inspiration. I don't think there is anything more important than these two things, and in order to obtain them, it is crucial to have a growing community. To become a better artist, you have to surround yourself with new and stimulating things so that your creativity can build, just like exercising a muscle. I would have never accomplished half the things I have today with my art if it weren't for constantly meeting new like-minded people that are intimidatingly talented at their craft. People in this field really underestimate the importance of meeting face to face with other artists, art directors, designers, etc. I'm so excited to see the 1200 Posters project bringing together some awesome art from some of my favorite artists. I've been honored to be a part of it.

“My initial idea for the quote was sheep. I imagined an ornate wool dress could serve as the ‘creative solution' and the numerous sheep's wool would be the ‘connections'. After the sketch stage though, Greg and Robyn really pushed me to take it to the next level, and I came up with the idea of something along the lines as a reverse prism, where a rainbow of different fibers would be turned into a single, gleaming-white thread. I drew up the final image on BFK Rives with graphite, scanned it, and did all the coloring digitally on my tablet. All of the sheep are purely digital, while the woman is a little more traditionally drawn.”