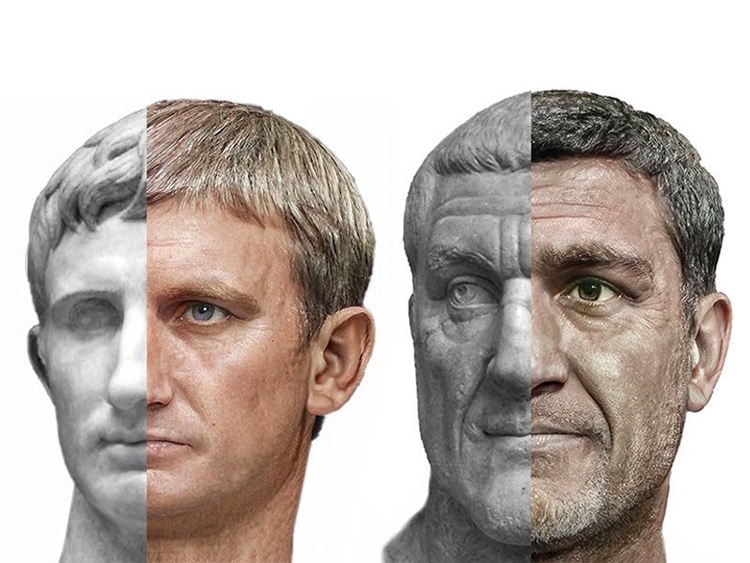 Digital composite of Augustus (L) and Maximuinus Thrax (R). (Photo: Daniel Voshart, CC BY-NC-SA 4.0)
This post may contain affiliate links. If you make a purchase, My Modern Met may earn an affiliate commission. Please read our disclosure for more info.

You're likely familiar with the names Augustus, Nero, and Caligula. They are Roman emperors who lived long ago, but they remain embedded in popular imagination since the fall of the last ruler in 476 CE. They've been immortalized as busts and statues in museums, but a new project is helping to visualize what these people would've really looked like while alive. Daniel Voshart, a Toronto-based cinematographer and designer, has created photorealistic portraits of the 54 emperors of the Principate period (27 BC to 285 CE). The period, which began with Augustus, includes some of history’s most infamous rulers.

To create likenesses for each emperor, Voshart collected almost 1,000 images of busts, coinage, and other representations. Using the neural-net tool Artbreeder, he then combined each emperor’s multiple representations, tweaking where necessary due to cracks in statuary. The images were then altered in Photoshop based on research into each emperor's family, place of origin, and written mentions of their appearance. Voshart emphasized on Twitter that each likeness is an artistic interpretation and that there is always room for error. He has already updated many busts, in fact, to eliminate the influence of biased sources in an effort to be as historically accurate as possible.

Some of the emperors brought to life by Voshart live in historical obscurity and are known only to scholars of the classics. Elagabalus—who was only 14 when he became emperor—ruled from 218 to 222 CE before being killed in a plot orchestrated by his own family. Others are more famous. Hadrian remains well-known for the wall in northern England which still bears his name, while the troubling antics and unpopularity of Caligula and Nero remain cautionary tales today.

This is not Voshart's first foray into ancient history. Using Photoshop and Artbreeder, he has previously brought to life Egyptian Fayum mummy portraits dating from the 1st through 4th century CE. Apart from them being stunning works of art, these digital likenesses of ancient people offer a chance to contemplate history on a personal level.

Meet the emperors face-to-face by browsing Voshart's descriptions drawn from historical sources, below. You can purchase a print of the Roman rulers by visiting his Etsy shop.

Daniel Voshart has recreated the 54 emperors of the Principate period of Roman history. 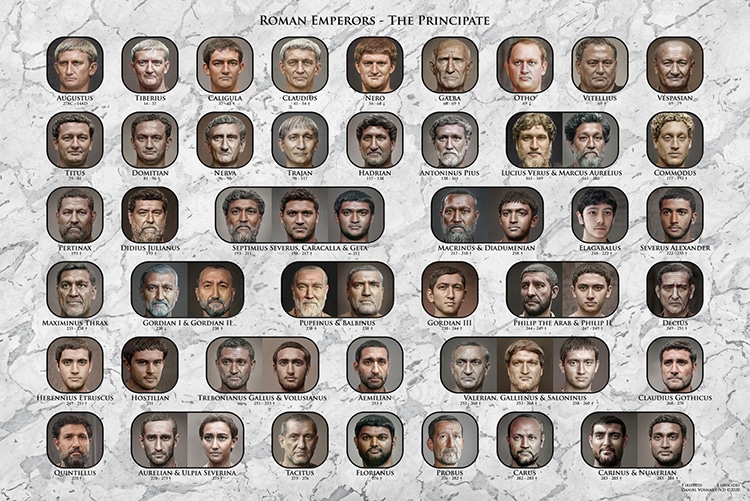 Poster of the emperors of the Principate period. (Photo: Daniel Voshart) 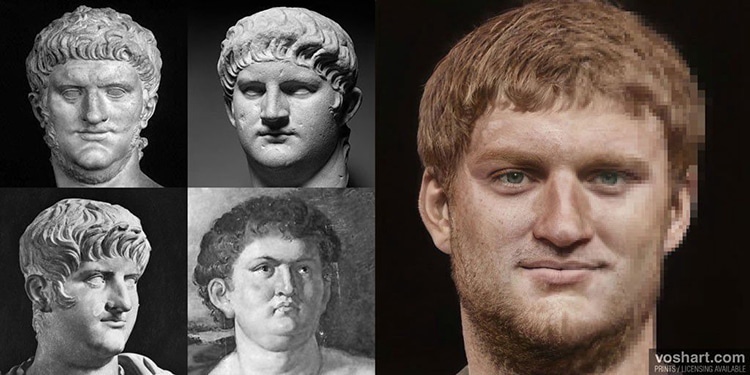 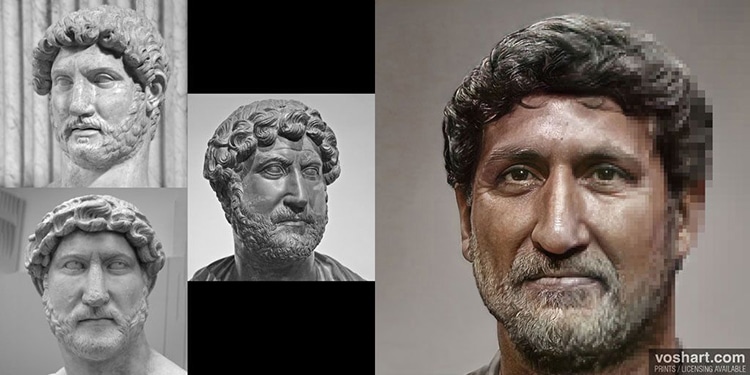 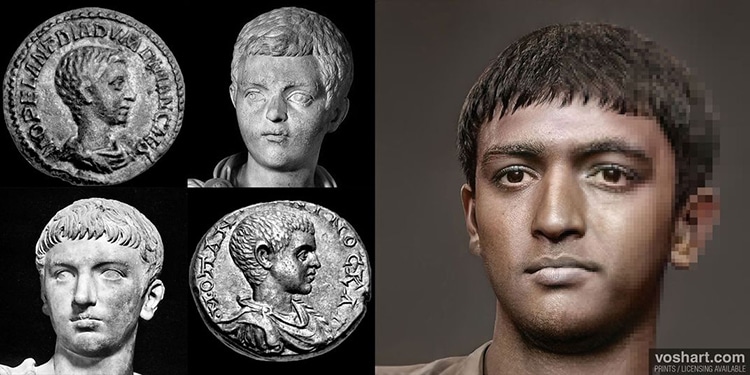 Voshart uses artistic representations, family ties, place of origin, and historical descriptions to customize each portrait with AI and Photoshop. 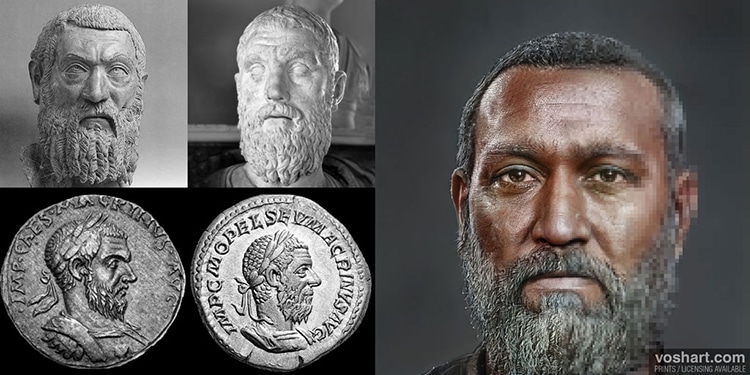 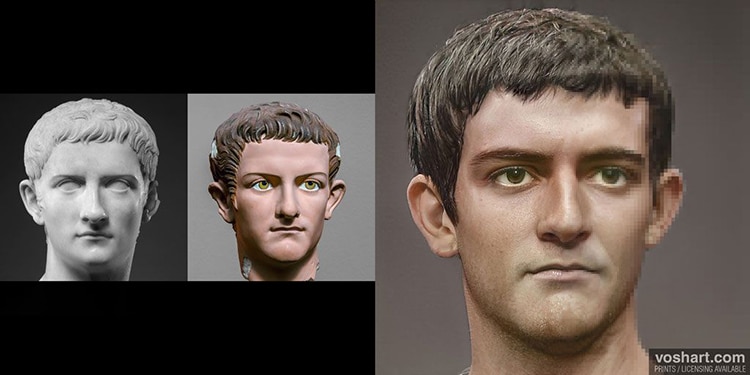 Do you know an ancient history buff who would love a poster of the emperors? 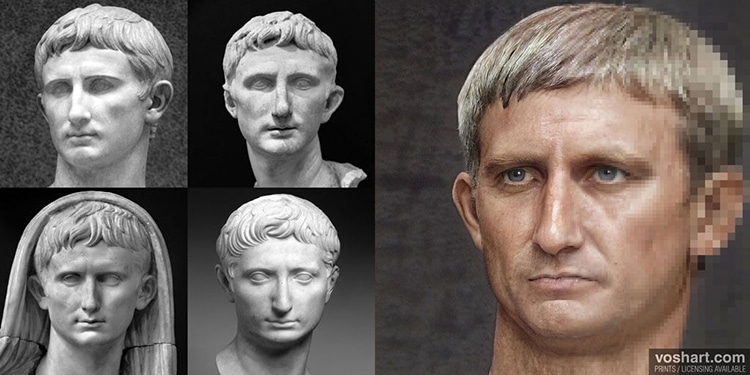