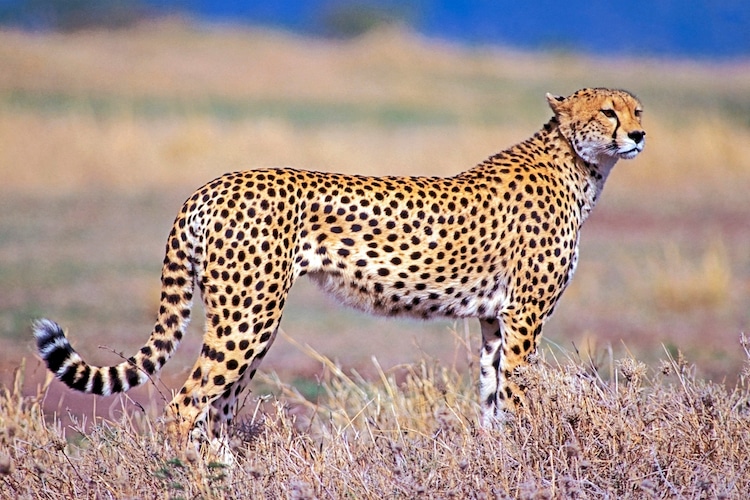 Cheetahs are imposing animals, especially given their ability to run up to 70 miles per hour. This carnivorous animal with distinctive black spots is known for its exceptional hunting and stalking abilities, making it a fierce predator in the wild. But unlike the other big cats it's often associated with—leopards, jaguars, tigers, and lions—cheetahs don't express themselves with fierce roars.

So what do cheetahs sound like? They meow and purr just like a regular housecat. Even though cheetahs, which can weigh up to 159 pounds, are quite large, their anatomy is that of a small cat. Their voice box is fixed, with vocal cords that vibrate as they breath in and out. This allows them to purr, but strips away their ability to roar.

In contrast, leopards, jaguars, tigers, and lions all belong to the Pantherinae subfamily. The structure of their larynx, which includes large muscles and a long vocal fold, makes it possible for them to roar. Rather than having a fixed voice box, they have a ligament that contributes to the deep and loud vocalizations that have been known to paralyze other animals.

Cheetahs are part of the Felinae subfamily of small cats, all of which have the same vocal structure. Other members of this subfamily include the Eurasian lynx, bobcat, and cougar, as well as regular domestic cats. All this just goes to prove that when it comes to cats, the saying “its bark is worse than its bite,” doesn't always hold true.

Did you know that cheetahs meow and purr just like regular housecats?

What’s Your Sleep Animal? Find Out With This Quiz.