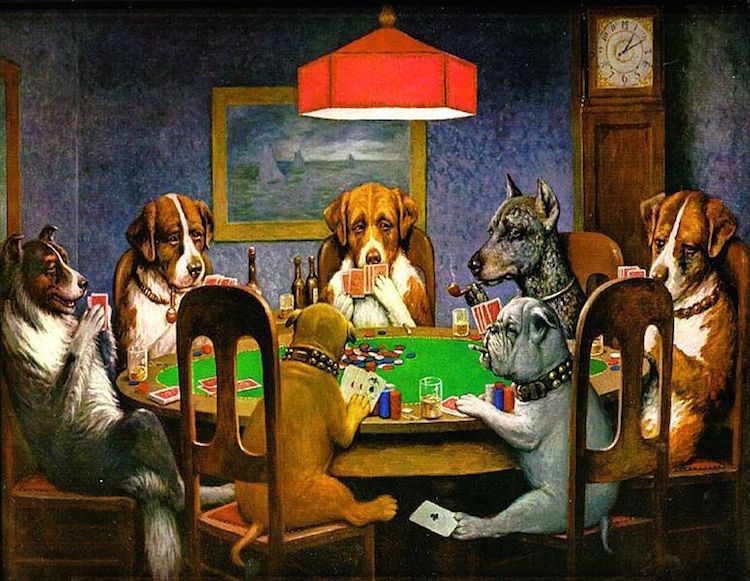 It’s not commonly known, but Dogs Playing Poker by Cassius Marcellus Coolidge refers to not just one painting, but 18 of them! The series includes the artist’s original Poker Game (1894) painting, along with 16 other oil paintings commissioned in 1903 by Brown & Bigelow to advertise cigars, and an additional 1910 painting. All eighteen of these paintings feature comical, humanized dogs; however, only eleven of the paintings actually depict poker-faced pups playing cards around a table.

A Friend in Need (1903) is arguably one of the most popular (and thereby most recognizable) paintings ever. However, unlike other iconic works such as Da Vinci’s Mona Lisa, Botticelli’s The Birth of Venus, and Van Gogh’s Starry Night, Coolidge’s paintings were never considered by critics to be genuine “art.” Instead, when they were first published, Coolidge’s oil-on-canvas paintings left people in hysterics. Art historian and director of the Chrysler Museum of Art in Virginia, William Hennessey, even went so far as to publicly mock the series on April Fools Day in 2002 by releasing a press release claiming he was trying to acquire the series for the museum’s collection. However, Hennessey later admitted, “I’ve always liked them,” and he isn’t alone.

With their expressive faces, smoker pipes, and whiskey glasses, Coolidge’s poker dogs have become iconic. So much so that they’ve been referenced in popular TV shows—such as Cheers, Parks and Recreation, and The Simpsons—copied and parodied countless times, and have even become popular kitsch motifs for t-shirts, coffee mugs, and home decor. Furthermore, Coolidge’s first painting, Poker Game (1894), was recently sold for $658,000 at a Sotheby’s New York sale on November 18, 2015. 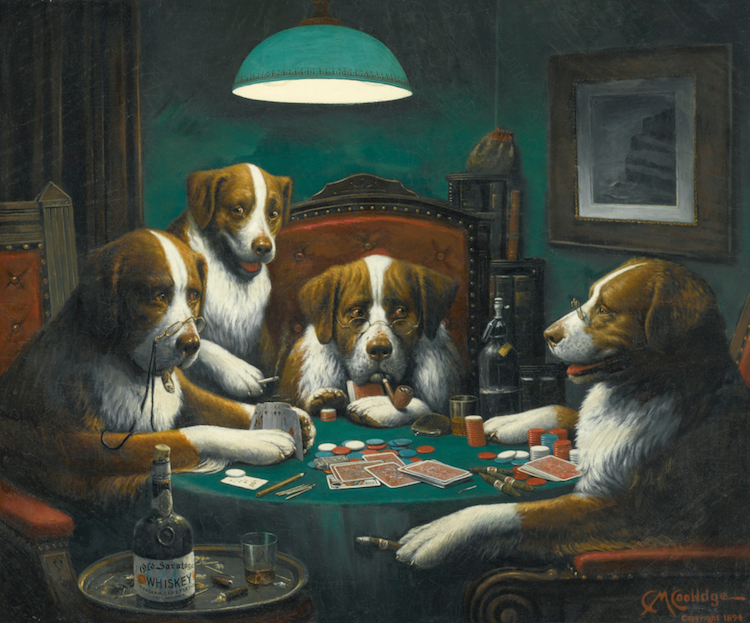 Who was Cassius Marcellus Coolidge?

Although his paintings are now considered iconic in the world of pop culture, Cassius Marcellus Coolidge is largely unknown and was once dubbed “The most famous American artist you’ve never heard of.” The artist was born in 1844 and had no formal art training. Despite this, he had a talent for creating playfully surreal, humorous illustrations and started selling his drawings to various magazines by 1864 when he was just 20 years old.

During adulthood, Coolidge tried his hand at many different professions, including sign painting, banking, pharmacy, and newspaper publishing. However, his true passion was for art, and he soon developed a career as an in-demand illustrator—especially for children’s books featuring funny animals.

According to art historians, Coolidge developed what are now called “comic foregrounds”—the cartoon murals seen at carnivals that people can stick their heads into for a funny photo opportunity. 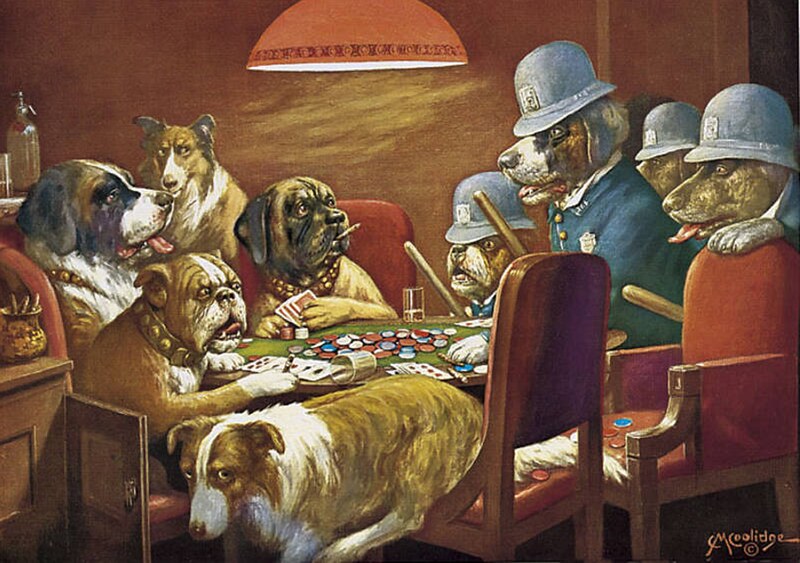 It is unknown where Coolidge got his idea for his first poker dogs painting (Poker Game, 1894). However, the image’s composition is thought to have been inspired by works of Michelangelo Merisi da Caravaggio, Georges de La Tour, and Paul Cézanne, who all have their own depictions of a card game scene—albeit with humans as the subject, rather than dogs.

Some have often compared Coolidge’s A Friend in Need with English artist Sir Edwin Landseer’s painting, Laying Down the Law (1840). Both feature dogs gathered around pensively, acting like people—card-players in Coolidge’s work and lawyers in Landseer’s—however, Coolidge’s painting portrays a much lighter and comical spirit compared to Landseer’s more serious, solemn tone. 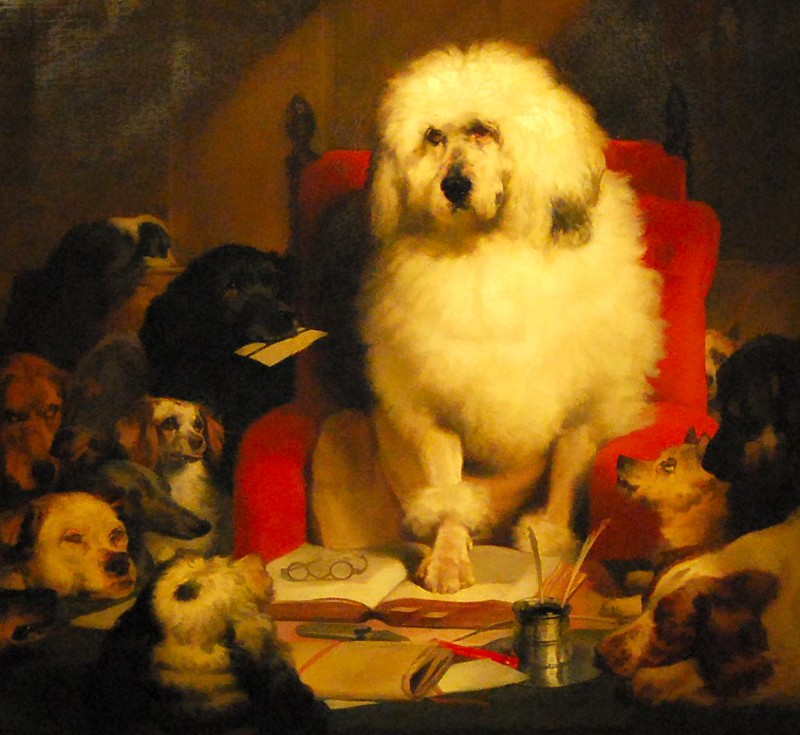 It wasn’t until almost a decade after the first poker dog painting that Coolidge was commissioned by Brown & Bigelow. The 16-piece series includes depictions of groups of dogs in all sorts of humanistic scenarios, including a football game, a road trip, and even a jester performing for a royal couple. The artworks were originally used for promotional posters, calendars, and prints to advertise cigars. The calendars in particular proved to be popular nationwide, and Coolidge’s art found its way into millions of homes. 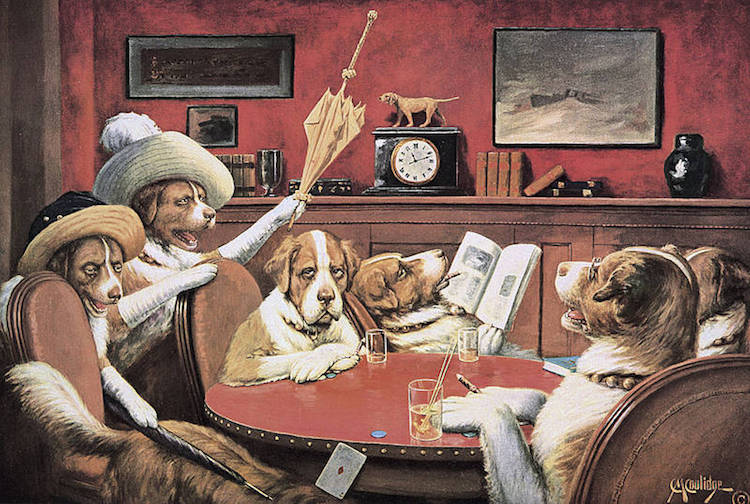 “Sitting up with a Sick Friend” by Cassius Marcellus Coolidge. (Photo: Wikimedia Commons) 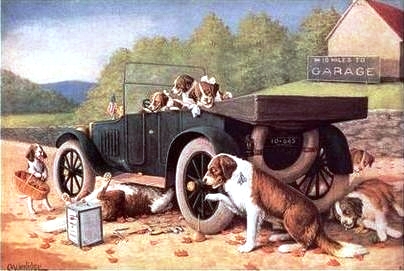 More than a funny series, Dogs Playing Poker also contains a brief, yet dramatic narrative, told through a pair of the paintings. In A Bold Bluff (1903), a Saint Bernard bets on a pair of deuces, leaving his opponents to decide whether or not he’s bluffing. In Waterloo, completed the same year, the other dogs snarl at the Saint Bernard’s hand as he rakes in the large pot. The two paintings were put up for auction in the Doyle New York’s Dogs in Art Auction. Predictions were made that the pair of rare paintings would fetch $30,000 to $50,000, however, an anonymous bidder ultimately paid a staggering $590,400 for both, setting a record for the sale of Coolidge works.

However, it’s Coolidge’s A Friend in Need that became the most popular of the lot. The title comes from the fact that the bulldog in the foreground is seen secretly slipping an ace to his partner, while his competitors give side-glances around the table. Perhaps it’s this sly, yet playful depiction of deceit applied to man’s best, most loyal friend that makes the painting so amusing. Although the original has never been up for sale, it’s thought to be worth millions of dollars. 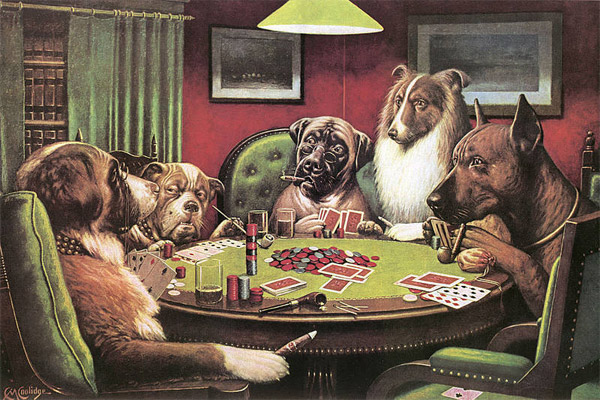 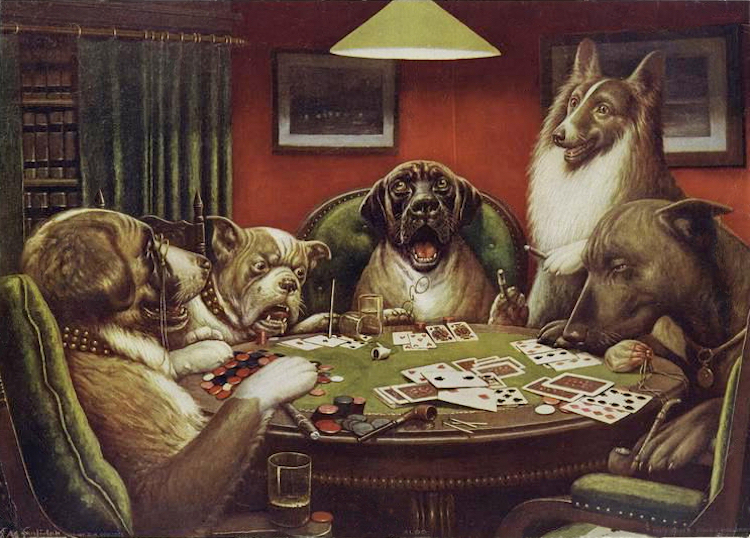