Interview: Dorothy O’Connor Reimagines Her Life as Surreal Installations in a Single Room 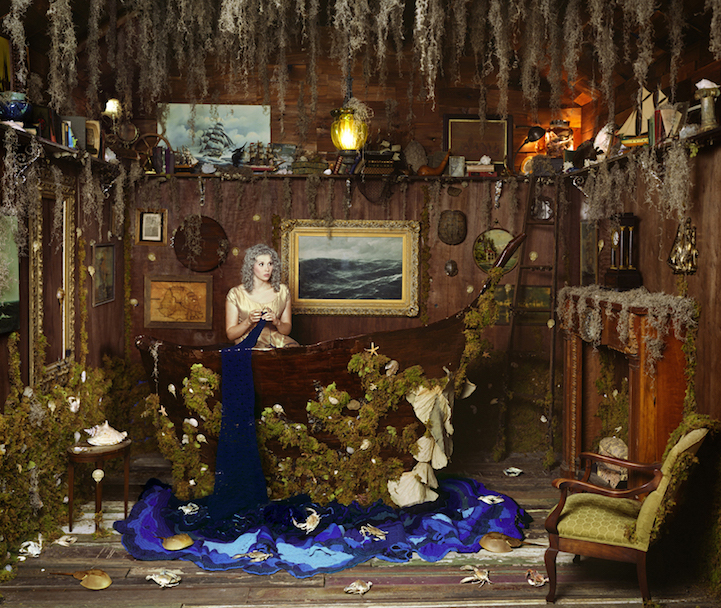 Dorothy O'Connor translates events from her life into a surreal ongoing series called Scenes. For years, the artist has transformed spaces–often a room–into fantastical places that tell a story. Visually rich and exciting, they feature elements of the natural world that are handcrafted by O'Connor. In one room, a den of snakes line a ceiling, while in another, over 200 paper birds circle the space. A giant tornado–which has over 500 feet of fabric around it–engulfs the contents of another. These awe-inspiring sights are interactive and initially displayed as installations (with live models) in galleries and other art spaces. The tornado, for instance, actually rotated during its opening.

Every concept in Scenes is predominantly shaped by O'Connor's experiences. As a result, these spaces double as a conceptual autobiography and creating them is a cathartic experience. “Building these life-sized installations also allows me to literally live inside my own imagination,” she writes, “if only for a short time and satisfies the need to create a more aesthetically pleasing reality.” Each project takes her months to complete, and after the scenes have debuted, they remain only as a photograph.

We were pleased to talk to O'Connor about her intriguing series. Read our exclusive interview, below. 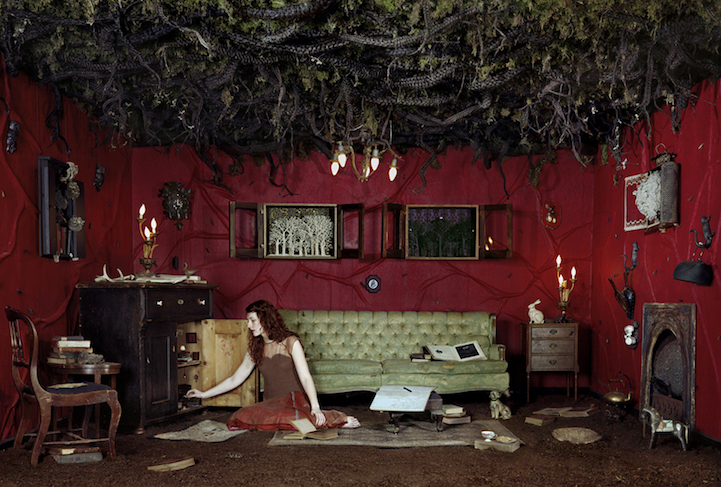 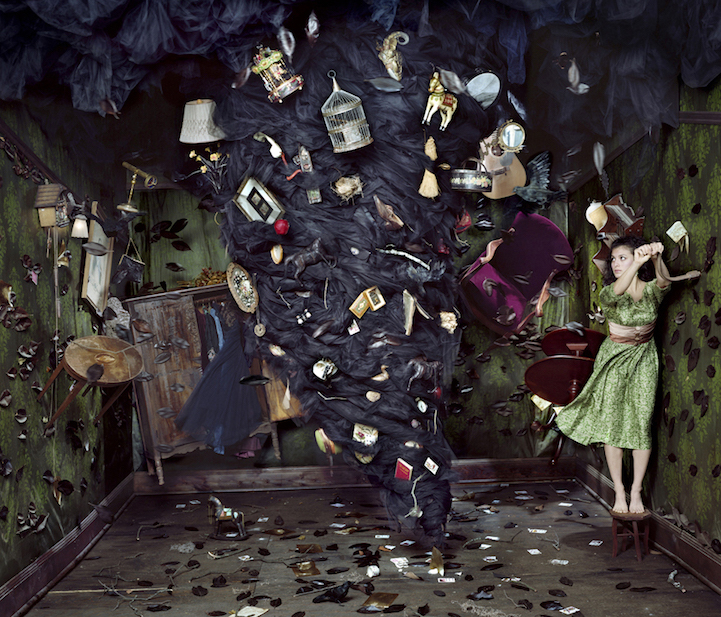 The installations are so detailed! How did you go about planning these compositions? Do you start with a firm idea, or do you let things evolve?

I do both really. I start with a firm idea and often add to it throughout the process. I draw out each concept and write descriptions too since, unfortunately (and sadly), I really can't draw.

You make many of the scene's components by hand, learning a new skill with each scene. What is your favorite thing you've created, and how has this attitude of learn-as-you-go helped with other projects?

My favorite thing was the tornado! I loved that tornado and I really miss it, but what I enjoyed creating most, and still do – are the paper birds. I love the process of making them and hope to have the time and funds to explore creating birds with new materials (metal perhaps?) soon. Something about the simplicity of the design and the repetition of the act itself is comforting to me. It took me a while to figure out how to make a successful bird since I hadn't really ever worked with paper before. When I finally made one that I was happy with, I felt a strong sense of accomplishment and a realization that with perseverance – I can figure out how make almost anything that I can conceptualize. It has certainly given me confidence going forward. 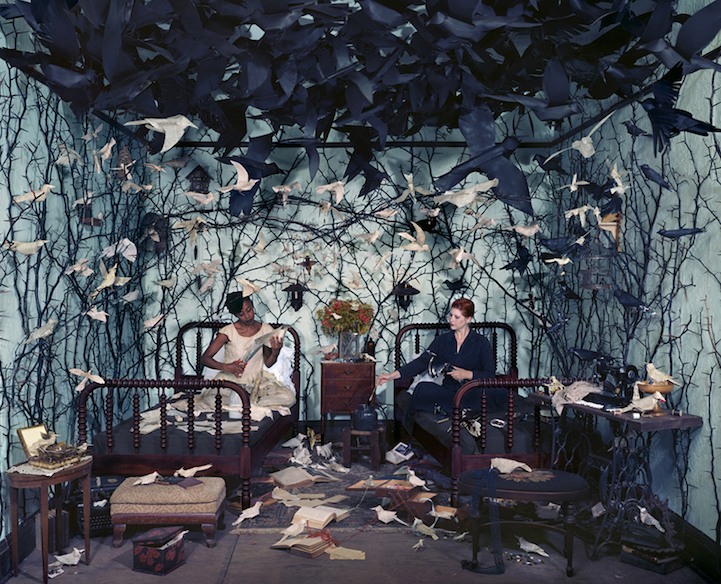 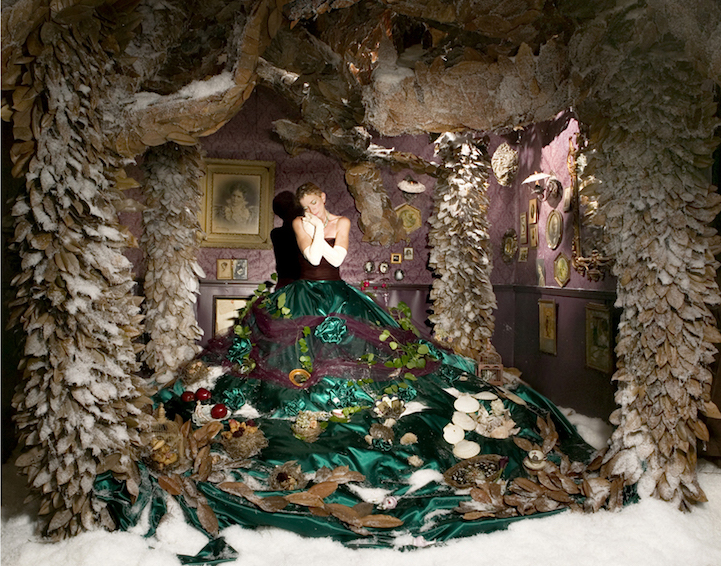 Did you learn anything from recreating the past? Did it inform your future?

I think I learn something about myself every time I create a scene. Often times, when I have a concept (which frequently comes in the form of a dream) I am in the middle of whatever event that is pushing the visual and the need to create to the front of my mind. It isn't until afterwards, when the scene is finished, that I can look back and see what it meant in conjunction with what was happening in my life. In that way, it can certainly provide perspective and insight into situations and how I see and feel (felt) about them. 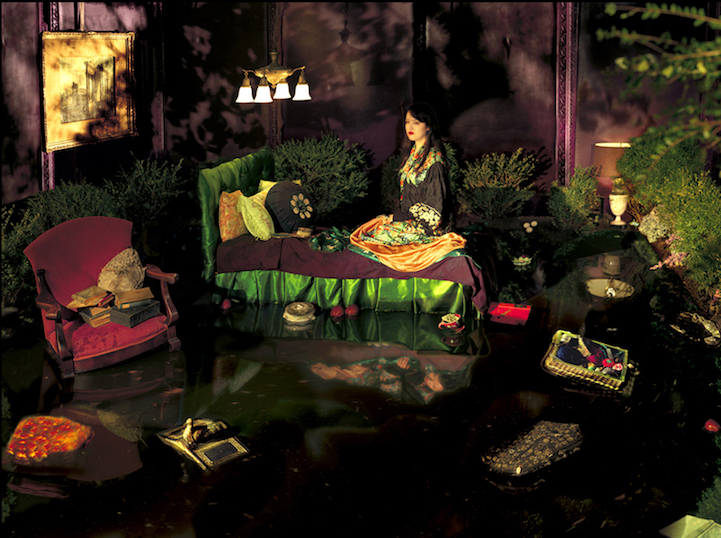 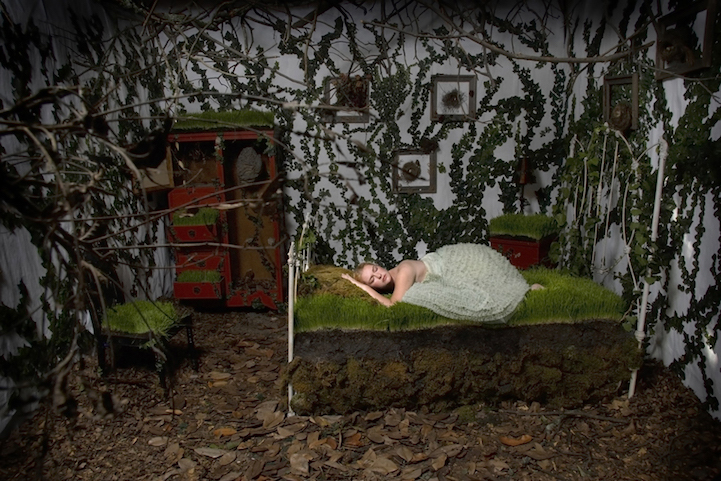 Which scene is your favorite and why?

I am going to list three scenes that are my favorites for different reasons… I loved/love the Tornado – I look at that image and see exactly what I was picturing when I came up with the concept – like it was pulled right out of my brain. I also love the tornado because it actually rotated! For the live opening, when the model began to crank, I would sneak over and flip a switch connected to a motor that propelled the tornado to spin. It spun pretty quickly too! It was fun and felt like a major accomplishment, though I had a lot of help with it as well.

My second favorite, for different reasons, is “Room.” My grandmother had recently passed away when I built it and most of the objects in the scene were hers. The model is also my best friend so, of course, that makes it special too. Even with the snow and the feeling that the woman is withdrawn and out of reach, that image still fills me with warmth.

“Shelter” is another favorite. I built it during an artist residency at Cheekwood Botanical garden and Museum of Art in Nashville, and when I look at the scene I see the the whole incredible experience and think of all the great people that I met during my stay. It helps me remember what I can do when I let go of fear and doubt and embrace new experiences. It was an amazing gift. 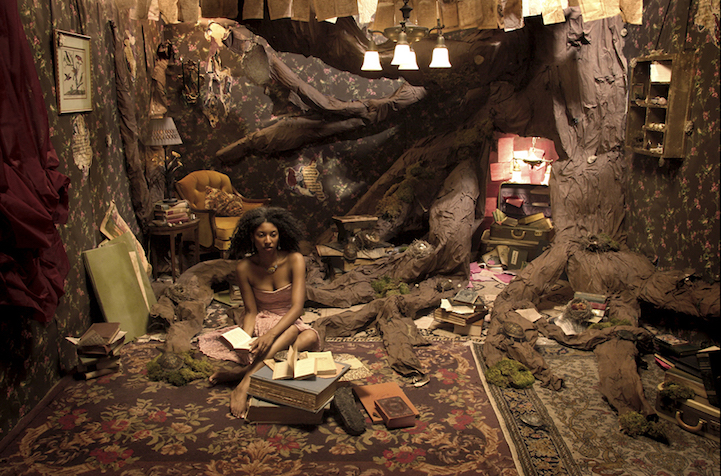 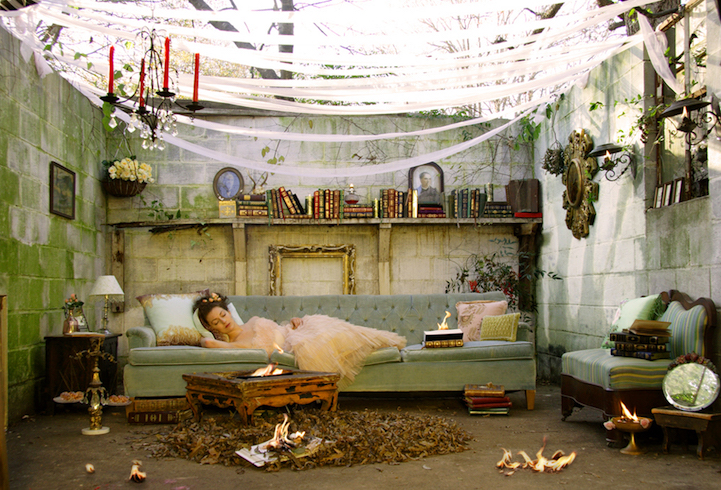 There's a performative aspect to your series, which features a live model in front of the audience. What is your most memorable experience with this, and how has it changed your pieces (for better or worse)?

The performance aspect came about at the suggestion of a friend and art patron here in Atlanta. The openings are all pretty nerve wracking – especially the few that have taken place at my home studio. I think having events in one's personal space heaps an extra sense of vulnerability on top of everything, which can be a good thing too. Opening them as installations has definitely changed the way I concept my ideas. It forces me to think about so many more aspects of the viewer's experience – not only the visual component, but also sounds, textures, smells, etc. It has also changed the way I look at ceilings, which have become just as important as what is happening below since they help to complete and encapsulate the fantasy. I guess if I had to pick the most memorable, it would be the Tornado because of the interactivity that was built into it and the very gratifying reaction from the audience. 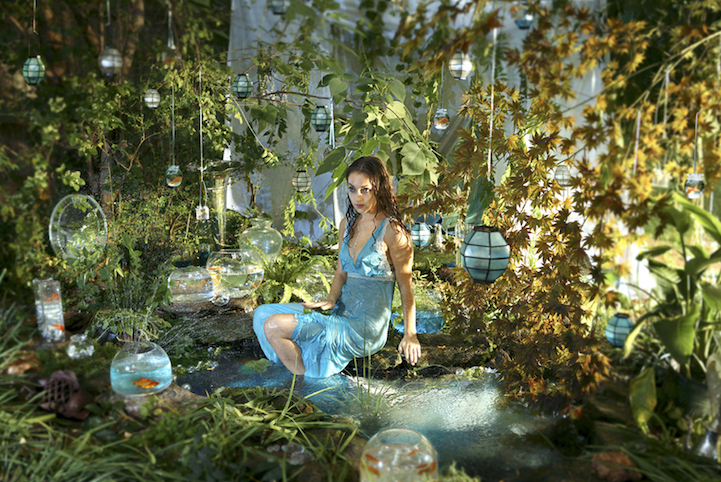 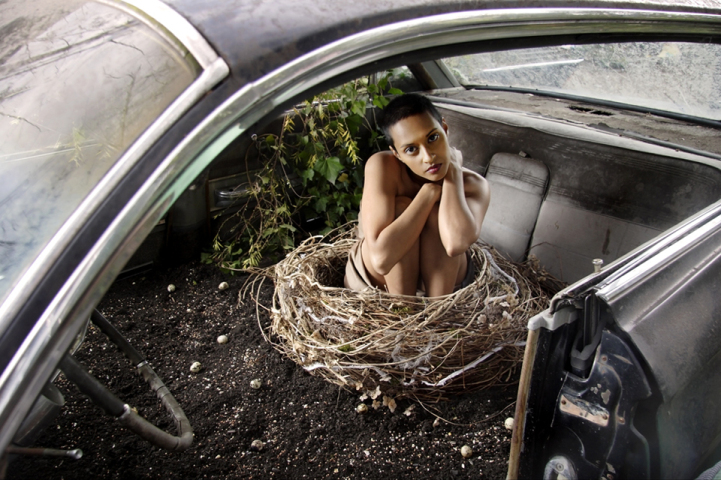 What do you hope viewers feel when looking at your work?

I hope that they feel interest and curiosity, a sense of beauty, and a desire to create their own version of the story from their own perspective.

Do you have a next scene planned? If so, what is it?

I am in the midst of building the next scene commissioned by Crusade For Art for their CSA, and hope to have it finished shortly.

My Modern Met granted permission to use photos by Dorothy O'Connor.