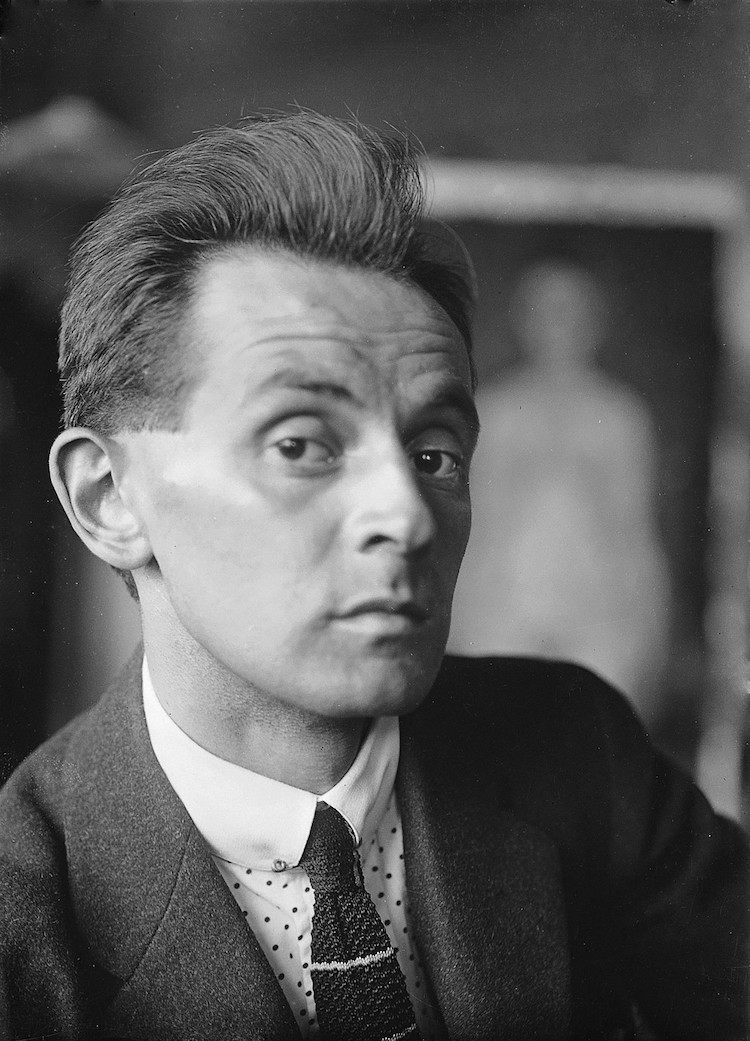 Austrian painter Egon Schiele was a major figurative painter of the 20th century. Within his short career, he created over 3,000 works on paper and around 300 paintings on canvas. Best known for his contorted portraits, Schiele rejected society’s conventional view of beauty and preferred to capture the true—and often ugly and explicit—emotions of his subjects. His work was often considered shocking at the time, but his signature style—angular lines and muted color—made him a pioneer of Austrian Expressionism.

A rebel who rejected tradition, Schiele dropped out of art school but never stopped making art. He was mentored by fellow Austrian painter Gustav Klimt who took him under his wing in 1907. The two collaborated, became life-long friends, and even had the same muse. As a result, Schiele’s early works are often compared to the iconic works of Klimt, however, Schiele soon developed his own unique style.

At age 28, Schiele tragically died of the Spanish flu—three days after the death of his pregnant wife. Despite his short life, the artist was extremely prolific, and his work helped establish the Viennese Expressionist movement as well as inspire other imminent movements such as Abstract Expressionism. Read on to discover five of Schiele’s most famous works. 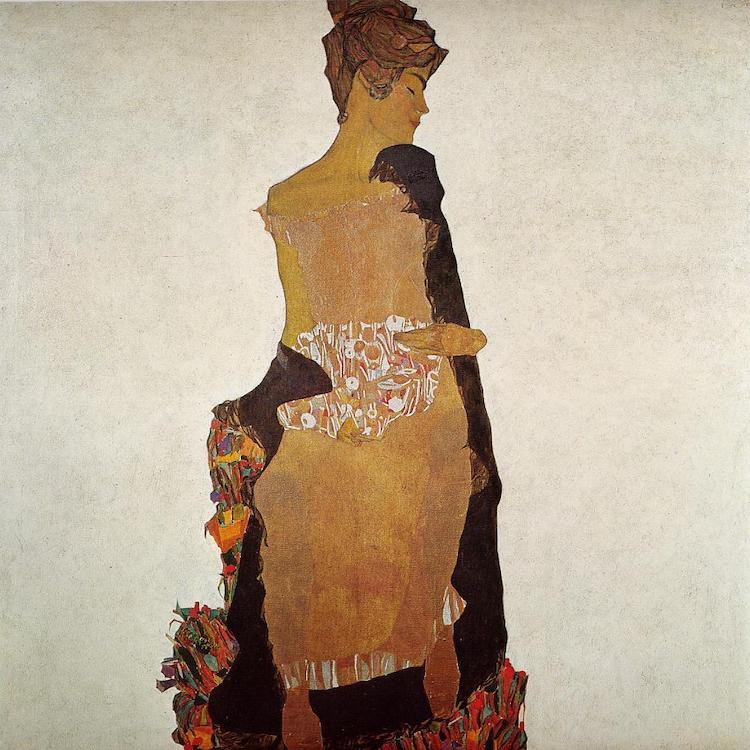 Portrait of Gerti Schiele was painted when Schiele was just a teenager. It depicts his younger sister, Gerti, who often sat for Schiele during his early years. In 1909, the young artist admired and often collaborated with fellow artist Gustav Klimt and his influence shines through in this particular work.

Despite being inspired by his mentor’s art, Schiele still showcases his own evolving style—one that is less decorative than Klimt’s. Created with oil paint and pencil, together with small amounts of gold and silver, Portrait of Gerti Schiele has a sculpture-like appearance. 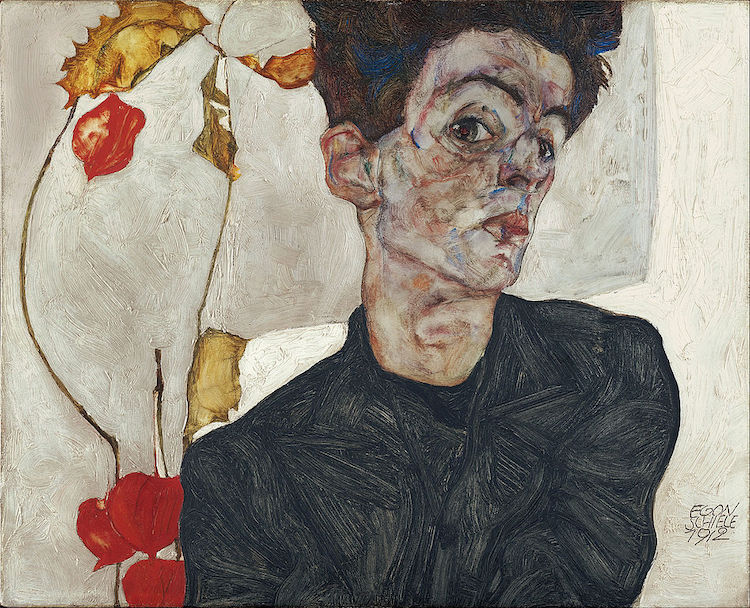 As one of Schiele’s most celebrated self-portraits, this painting depicts the artist with a confident—yet vulnerable—stare. It was painted during a time when the 22-year old’s artistic career was thriving and his work was being exhibited in numerous galleries. His hair and torso are both cropped by the edges of the canvas, and his face is painted with expressive, richly colored brushstrokes. The lines of the composition are also striking. The line of the shoulder on the right is continued by the jawbone, and the slanted left shoulder is in line with the two-tone white background. The twig with leaves and Chinese lanterns on the left of the picture appear delicate, echoing the artist’s depiction of himself as slightly fragile.

The painting was originally exhibited in Munich in 1912 alongside a portrait of his lover at the time, Wally Neuzil. The Wally portrait was stolen by the Nazis from the home of a Jewish Austrian, only to be returned to Vienna in 2010 following a 12-year legal battle. 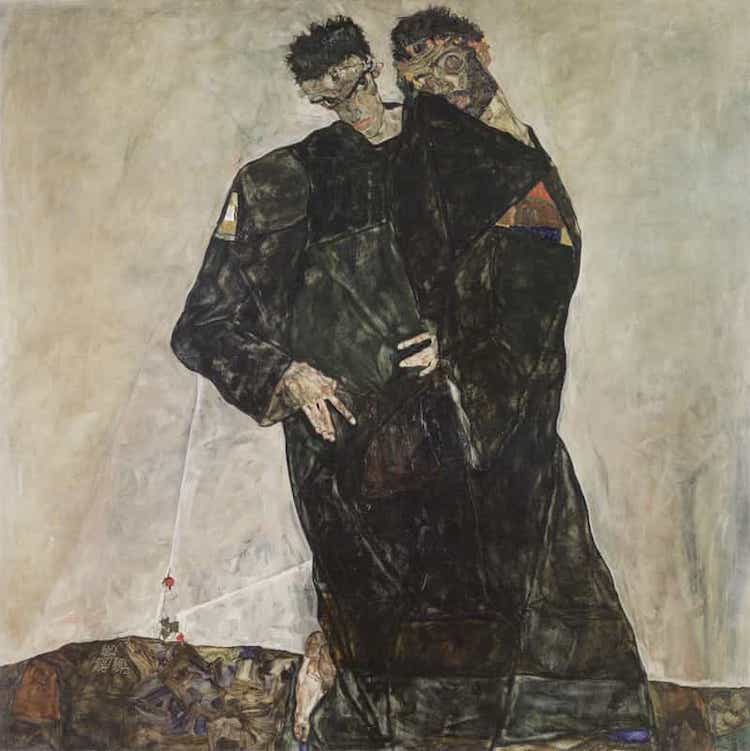 In this double portrait, Schiele paints himself and his mentor, Klimt, standing closely together. Both figures wear long black caftans, an item of clothing that both Klimt and Schiele were known for wearing in real life. Klimt is positioned behind Schiele, partially concealed and blinded. In a bold statement, Schiele paints himself as the old master rather than Klimt. The dark figures and title of the painting suggest Schiele’s feelings of isolation as he lived on the fringes of society. 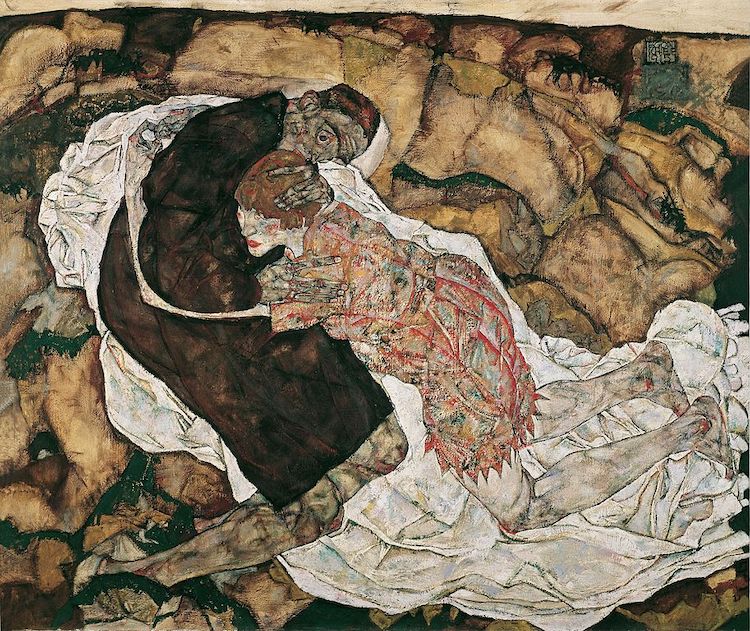 During the time Death and the Maiden was painted, Schiele was ordered to report for active service in the First World War. The artist had put it off for over a year, but eventually, he was appointed to guard and escort Russian prisoners (who later became subjects for his art). Death was a prominent theme in Schiele's life at the time, and this haunting painting captures the artist’s depressive state of mind. It features a gaunt female figure clinging to the male figure of death, wrapped in a white sheet and surrounded by a grave-like surreal landscape. Some believe the painting represents Schiele’s painful separation from his longtime lover, Wally Neuzil. The artist painted it several months before he married his new lover, Edith Harms, and perhaps, the work is symbolic of the death of his previous relationship. 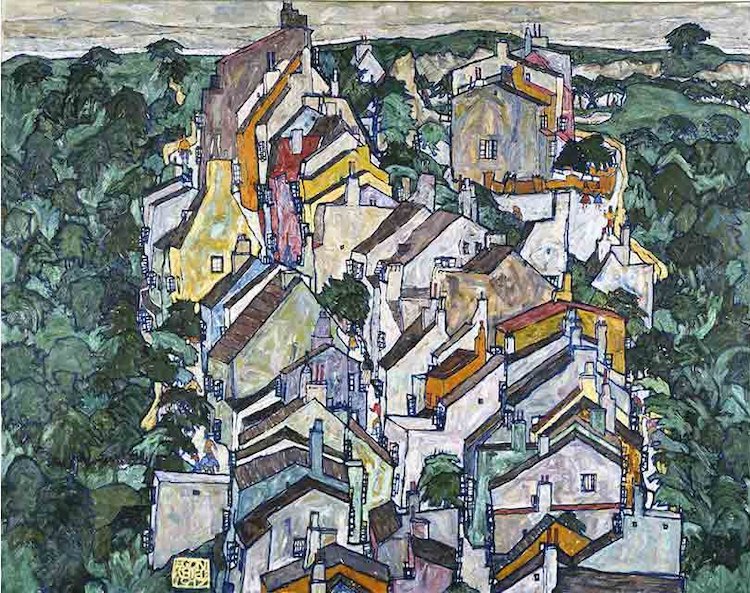 Although Schiele is perhaps most famous for his figurative work, the artist occasionally painted landscapes and cityscapes. Town Among Greenery (The Old City III) depicts a view of Krumau, the hometown of Schiele's mother, in what is now the Czech Republic. The painting features many typical characteristics of the artist’s work, including bold lines, sharp angles, and a bird’s-eye perspective. However, in contrast to his usual style, this piece features a range of bright hues.