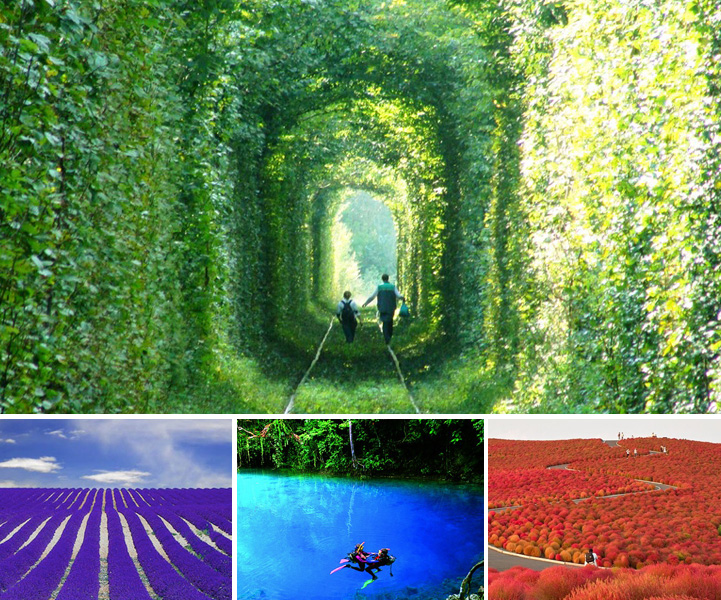 While we here at My Modern Met are all about amazing art, design and photography, we get very excited when we come across incredible travel destinations that have been photographed by those lucky enough to witness Mother Nature's most beautiful creations. Today, we've rounded up ten places in the world that are at the very top of our “bucket list.” They're amazing experiences we're thrilled to share, places so surreal or dreamy that they feel like they've jumped off the pages of a storybook.

Rather than just put together a list of stunning travel destinations, however, we went one step further and found places that aren't necessarily the ones most written about in travel guides or talked about amongst friends. Instead, these “off the beaten path” destinations ask you to have a little faith, to summon that adventurous spirit of yours and take a journey to a hidden or faraway place. Now, let's go!

1. Tunnel of Love in Ukraine 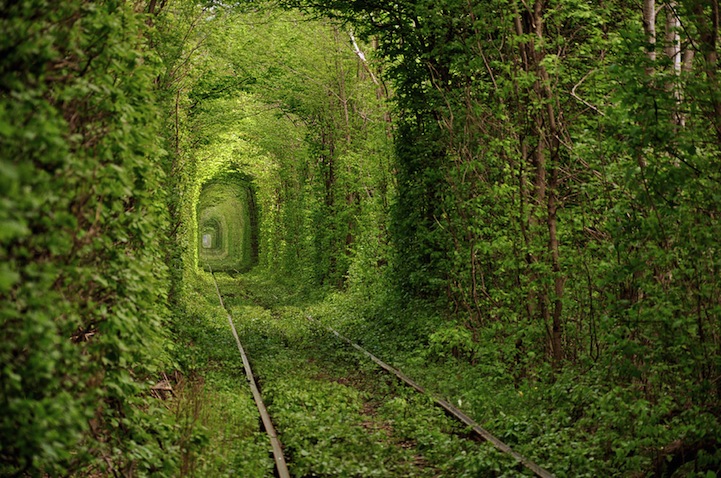 It's called the Tunnel of Love and it's an actual railway line in Klevan, Ukraine (near Kiev). An increasingly popular spot for young couples, the tunnel comes alive in the spring when a a huge canopy of trees form along the track to create a beautifully enclosed arch. The fairy tale-looking tunnel hasn't become an obvious tourist attraction yet as only local tourists really know about the secret love spot. (Photo by Oleg Gordienko via 500px) 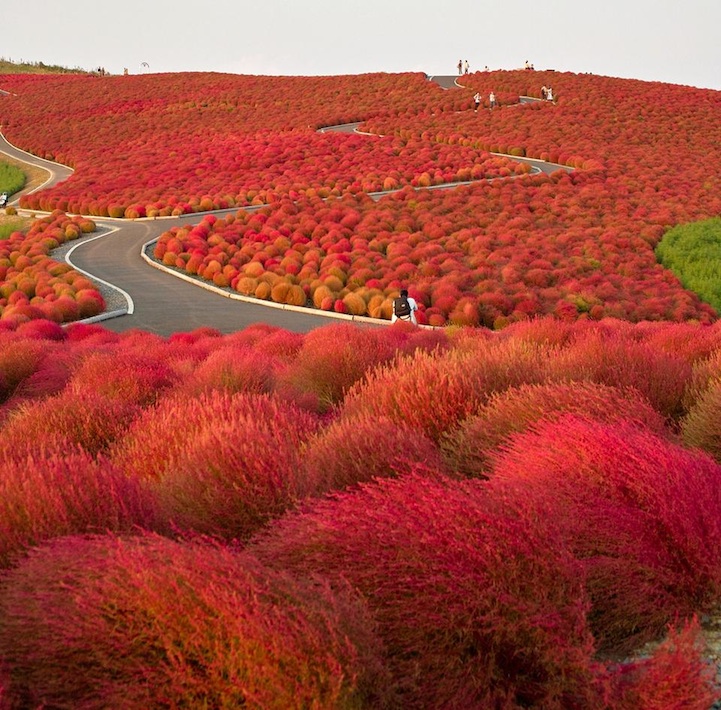 If your idea of a memorable travel destination involves tons of different flowers, visit Hitachi Seaside Park in Japan. Rolling hills are covered in a whole array of them that blossom during the different seasons. In the spring, come see the millions of blue nemophilias with their transparent blue petals. You'll also find tulips, roses, and zinnias at this floral paradise. Come in the autumn and you'll see kochi (also known as fireweed, summer cypress or burning bush), a prickly shrub that turns a bright red color. Visitors are encouraged to walk amongst the bushes and gaze at the fiery display of nature for themselves. (Photo source unknown via Travelet) 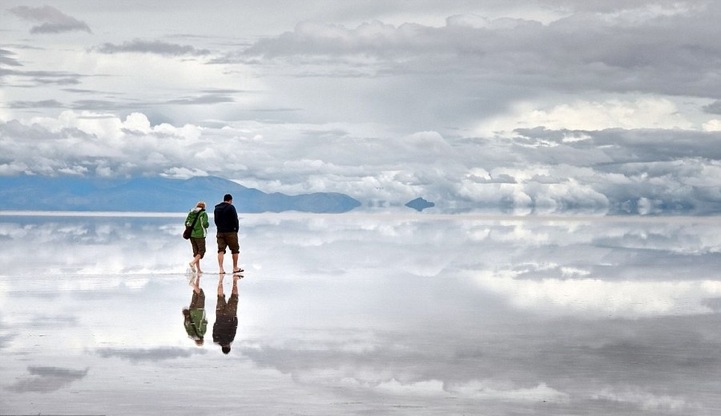 Make your way to Bolivia and look for a mystifying salt flat that has a reflective surface that makes it seem like you're strolling through the sky. Giving the illusion that you're walking on water, the slated terrain claims to be the world's largest salt flat at approximately 4,000 square miles. To experience this immense space, you must take a four-day off-road trip from the town of Uyuni to the Chilean border. Then, expect a long drive to the center of the salt lake. Those willing to make the arduous journey will not be disappointed, especially after it rains. The pockets of dry salt turn the land into a giant mirror, making it an otherworldly experience. (Photo source unknown via Kizik) 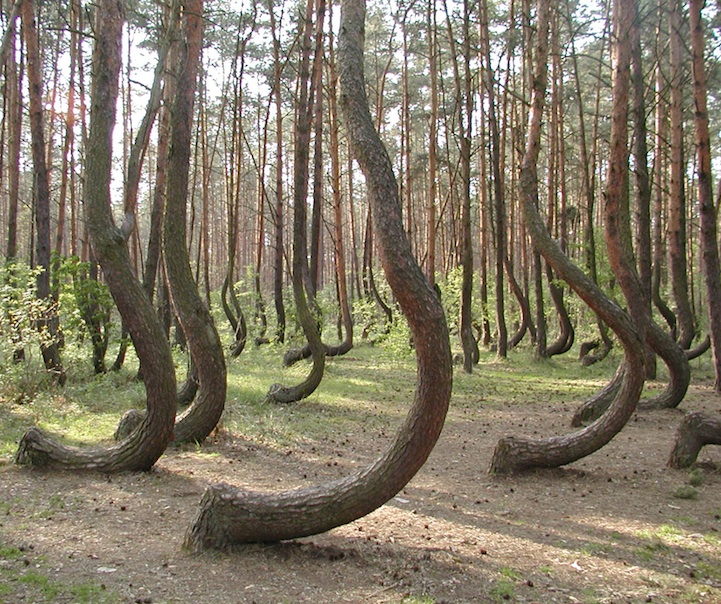 If you'd like to see a forest like no other, come find this place in western Poland where 400 pine trees are growing in an incredibly unusual way. Bent at the base of their trunks at a 90 degree angle, these trees almost look like someone cast a spell on them. Called the Crooked Forest, it's truly a sight to behold. The trees are said to have been planted around 1930 and grew for between 7 to 10 years before getting held down, by some sort of human intervention. Still shrouded in mystery, the truly unique grove can be found outside of Nowe Czarnowo in West Pomerania, Poland. (Photo by Maciej Sokolowski via Discovery) 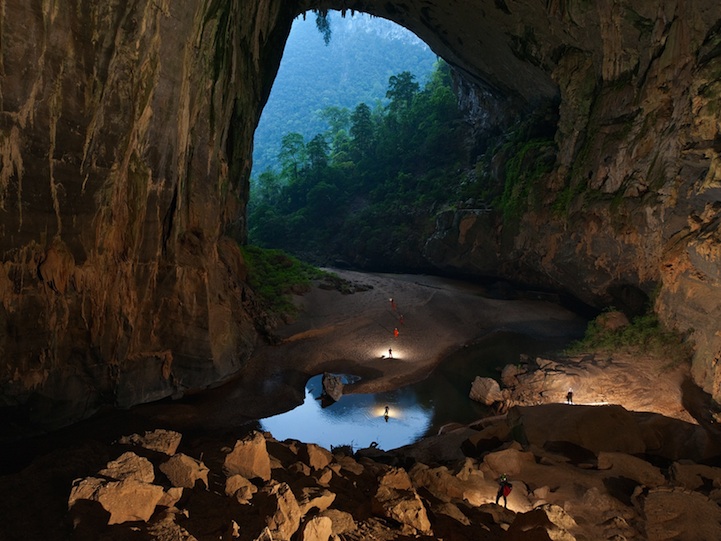 You're looking at a picture of the world's largest cave! Located in the Quang Binh province of Vietnam, Hang Son Doong (meaning “Mountain River cave” in Vietnamese) was only discovered as recently as 2009 when British cavers were led to its opening by a local farmer. Created 2.5 million years ago by river water eroding away the limestone underneath the mountain, the gargantuan cave is very far out of the way and is hard to find because it's covered in jungle. Measuring more than 650 feet high and 500 feet wide, it's believed to be almost twice the size of the last world record holder, the Deer Cave in Malaysia. (Photo by Carsten Peter via National Geographic) 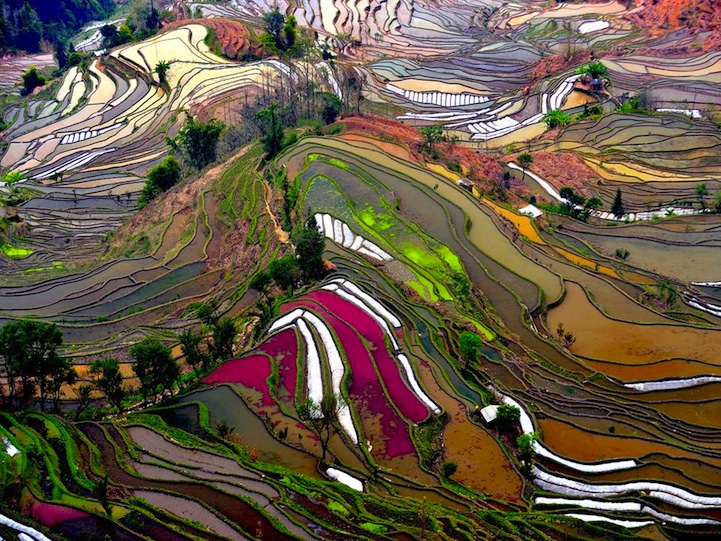 To see some of the most beautiful rice terraces in the world, head to Yunnan. China. Situated in a mountainous area in the far southwest area of the country, Yunnan is home to the beautiful Yuanyang rice terraces. Built on red-soil mountains, these rice fields take on the form of abstract patterns and are often referred to as “land sculptures.” Yuanyang claims to have the world's most spectacular and extensive rice terraces, crafted by the bare hands of the Hani people 1,0000 years ago and they're still in use today. The best time to visit this area is between December to April, when the terraces have been flooded in preparation for the rice planting. The paddies create a stunning reflecting pool effect, which is the perfect setting for both amateur and experienced photographers. (Photo by Theirry Bornier via National Geographic) 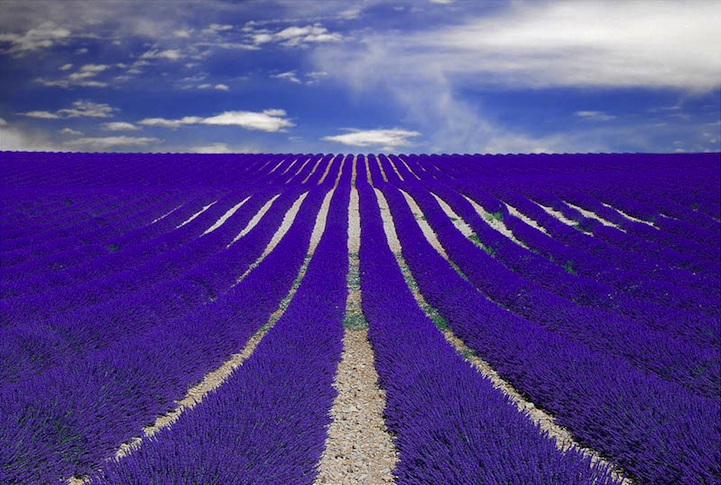 Although the bright purple rows of lavender are quite the sight, imagine how they must smell! From late June to August in Provence, France two main areas, Plateau de Sault and the Plateau de Valensole, are home to lavender fields that look like something out of a dream. For artists and photographers, this “off the beaten path” destination is a true source of inspiration and one that shouldn't be missed.(Photo source unknown via Reddit) 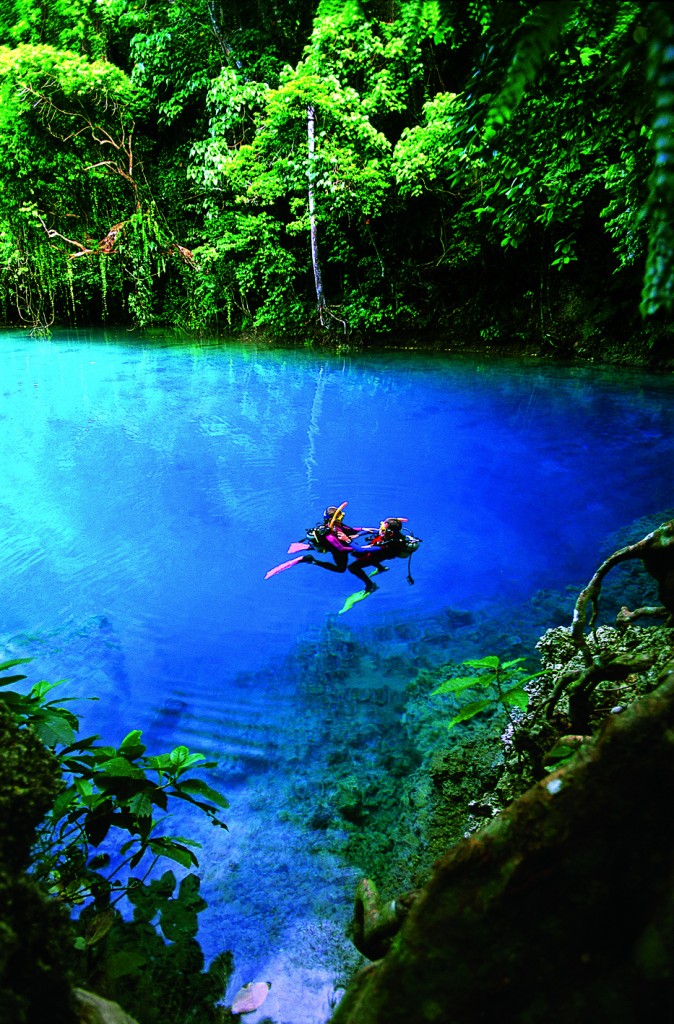 Located just west of Fiji, on the Espiritu Santo island of Vanuatu you'll find some of the most crystal clear blue waters you've ever laid eyes on. Called blue holes, they're large, deep pools of clear, fresh water that come to the surface through layers of limestone and coral. Come to these blue holes, which are surrounded by tropical rain forests, for a refreshing swim or a snorkel. Espiritu Santa is called an island of hidden treasures and is the largest of Vanuatu's islands. With beautiful white sand beaches, caves and these blue holes, there's a lot to see and do at this incredible destination. (Photo via Traveling Greener) 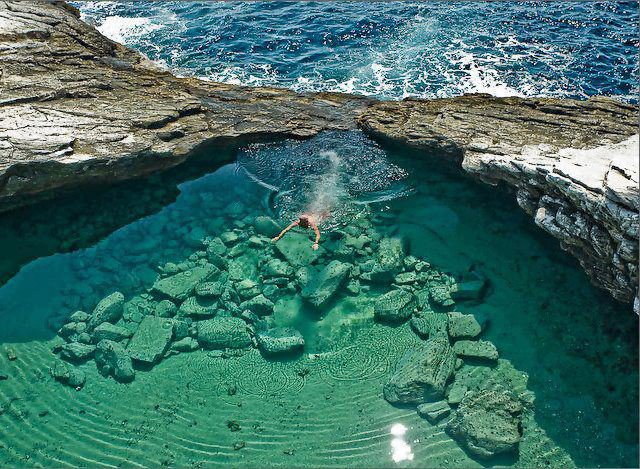 Looking for a secluded spot with an incredible view? Make your way to the island of Thassos in Greece and you'll find a secluded lagoon called Giola. This natural pool is carved right into the rocks and has water that's warmer than the sea. The clear blue-green waters invite those willing to make the trek there to swim and enjoy the stunning views. (Photo source unknown via Feedfloyd) 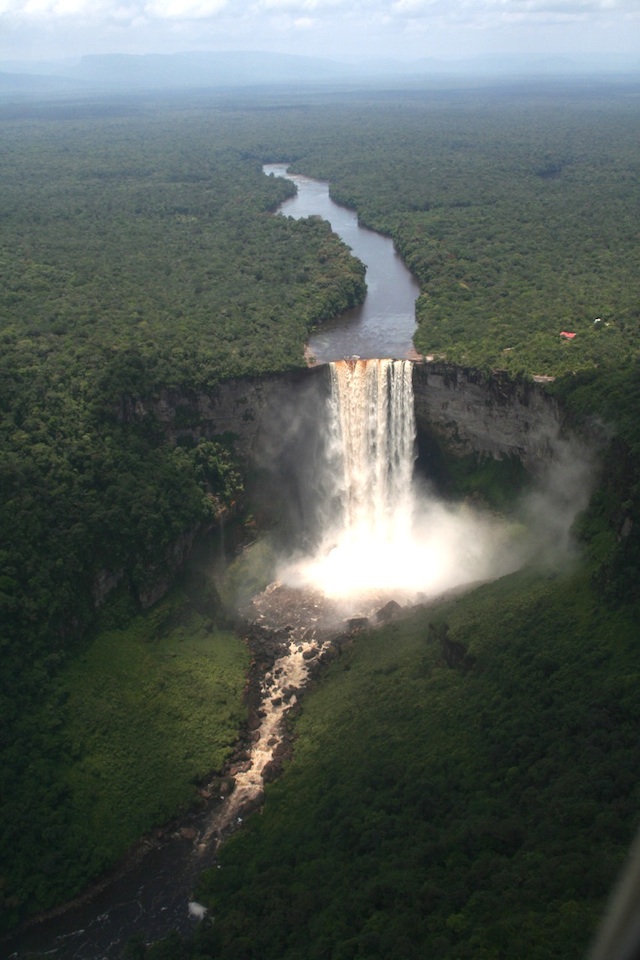 One of the most powerful waterfalls, Kaieteur Falls in central Guyana is a must-see for those who want to witness a true wonder of the world. It's said that you can hear the thunderous sound of the falls long before you get a glimpse of them. Watch as 30,000 gallons of water per second shoot out over a 820 foot cliff into the middle of a misty jungle. For daredevils (or those not afraid of heights), you can actually stand on top of the falls and look down to the immense river below. (Photo source unknown via Reddit)

Which of these travel destinations do you most want to visit?