Folly (The Other Self): A Surreal Sculptural Installation 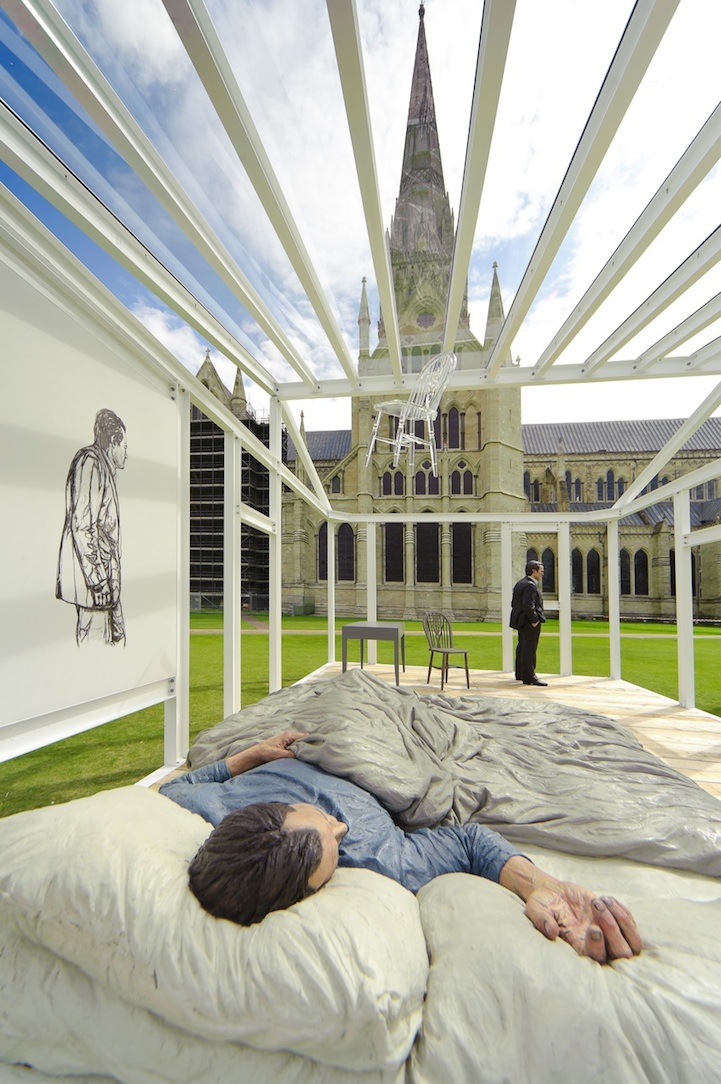 From July to November last year, artist Sean Henry debuted a surreal sculptural installation that asked its viewers to not only interact with it, but to also see themselves in it. Folly (The Other Self) consists of two painted bronze sculptures of the same man but in altered states – one is asleep in bed while the other is standing, lost in thought, nearby. A third image of the man is depicted as a drawing on the wall while a transparent chair floats in mid-air. The skeletal building acts as a home, representing the theater of life. The setting is the grounds of the Salisbury Cathedral in the UK, whose medieval architecture adds an extra layer of meaning to the piece.

Intriguing, isn't it? But what does it all mean? We got in touch with the artist to ask him this question and more. Read that eye-opening interview, below. 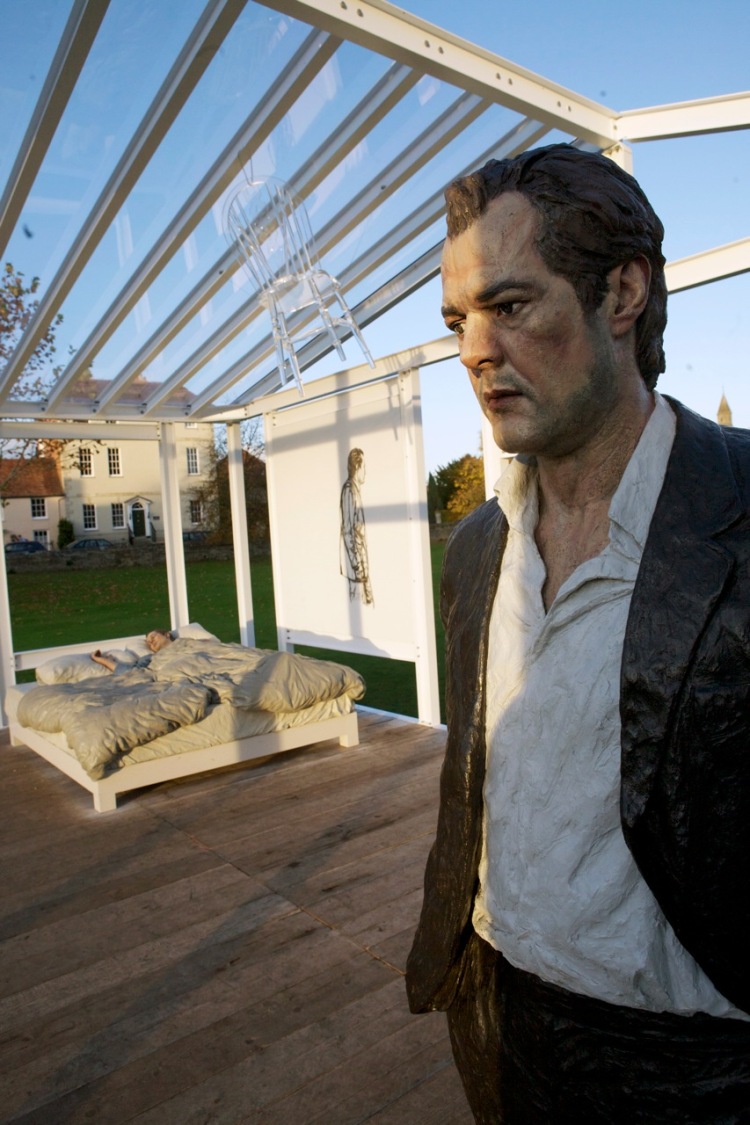 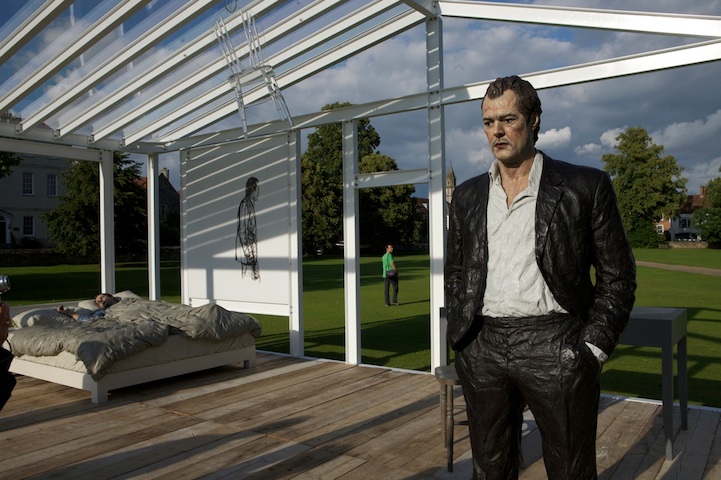 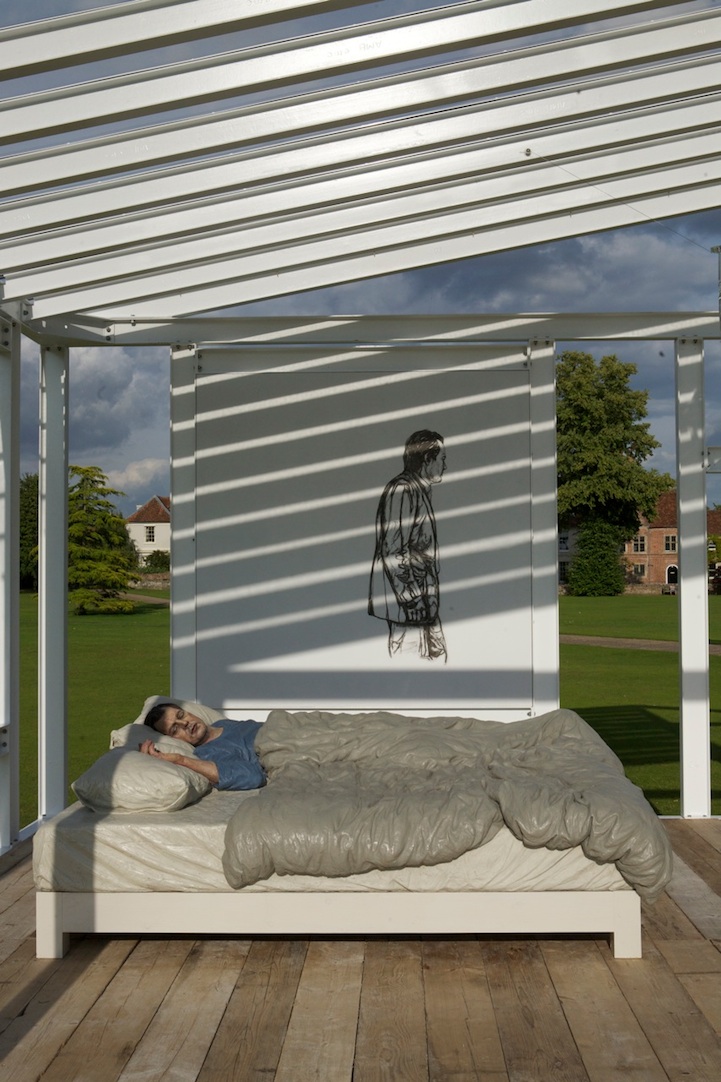 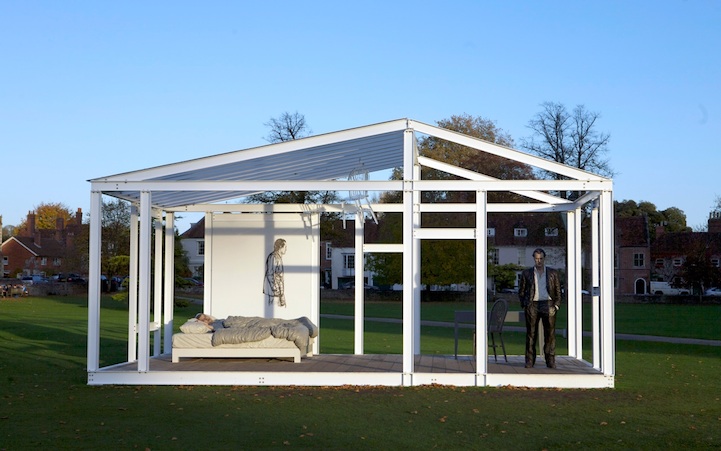 Can you please describe the installation, Folly (The Other Self)? How did the idea come about?
I first had the idea for Folly in 2006, when I was asked to make an outdoor piece for the then newly planned Scheringa Museum in northern Holland – part of the work developed from an existing interest in theater, specifically the theatrical “tableaux,” that moment when the actors stand still at the end of the play, under the lights, just before the curtain falls. I feel this moment has a great connection to sculpture, illustrating as it often does stasis, lighting, tension, hidden narrative. For me the realization came watching Edward Albee's The Goat in 2004, but it is equally true of Beckett's Waiting for Godot.

The sculpture developed and changed over time and was finally completed at the start of 2011, five years later. The work depicts two versions of the same man in altered states – one asleep in bed and one standing by a desk. I think of them as the same man, in the same space, at 3pm and 3am. A third, partial image of the same man is depicted in profile on the wall, where he has a more ambiguous presence slowly drifting through the space. The surreal nature of the composition in the sculpture is emphasized by the inclusion of two versions of the same chair. One is clear and hangs from the ceiling, the other is solid and stands next to the man. The chair is a Victorian wheelback chair, 10% bigger than normal, of the type I remember using in my parents kitchen as a child. The room is a golden rectangle.

How did viewers react to it or interact with it?
It was always my hope that people might walk through the space, perhaps sit on the edge of the bed, or on the solid chair, or stand beside the bed. And in that way they would become “implicated” in the space and sculpture – perhaps causing new viewers to be unsure about whether standing figures were part of the work or not. Likewise, I wanted the piece to change dramatically when the sun comes out – to be alive to the light – so the work was set to the points of the compass in parallel to the Cathedral, to make the most of the shadows.

The reality of visitors at Salisbury was more overwhelming than I could have imagined. People were in there the whole time! It was essentially a non-art environment, and people of all ages and backgrounds seemed to grasp immediately that it was two versions of the same man, and I think that kinship and familiarity we all have with sleep and sleeping made people feel fine about getting close to the work. They lay on the bed (sometimes in large numbers) stood by the man, and seemed genuinely interested to understand what the work might mean. They photographed each other constantly, and generally behaved like they were at home!

Over 100,000 people came to the exhibition in just over 4 months. It was extreme, compared to a normal gallery show.

How important is storytelling when you create your sculptures?
I am interested in the concept of a “hidden narrative” within my work, but I am not really interested in storytelling, specifically. Rather, I think I attempt to reveal something of the inner life of the people who I am sculpting and, perhaps, in that way I inadvertently reveal something of myself as well. In Folly , we see the same man three times over and that hopefully starts to tell us more about him, and perhaps us. The word “folly” (in English) obviously refers to a “building with no purpose” or a “mistake,” but I like to think of this sculpture being about the fragility of life, and seeing that echoed in the skeletal structure of the building itself; nothing lasts forever and we are affected by the decisions we take in life. We also all have to lie down for about 8 hours of every 24, and then rebuild ourselves again in the morning. Personally, I often feel quite discombobulated at 3am, and I wanted the sculpture to reflect that.

I should add that I never make portraits of people, but I do base my sculptures on carefully chosen individuals. The man in Folly, I hope, embodies a certain type of person at a certain point in their life. In his standing persona, I think we feel him existing very much “in his head” and he has quite an intense presence. In the sculpture of the bed, he is the opposite, alone and perhaps no longer in control.

How important is choosing the right environment?
To me, the environment for sculpture – the context in which you view it – is almost everything. I think about this the whole time – how lighting, location, height, mood, scale, color and so forth – affect how we feel about art.

Thanks for the images and interview, Sean. Fantastic work.