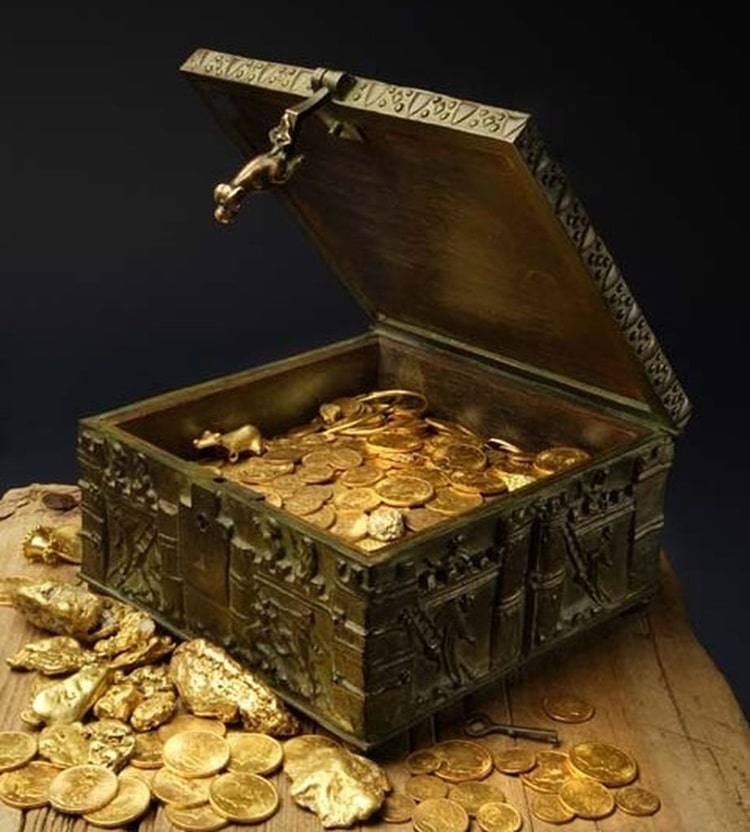 Fenn's Treasure Chest (Photo: Forrest Fenn)
This post may contain affiliate links. If you make a purchase, My Modern Met may earn an affiliate commission. Please read our disclosure for more info.

For centuries, the lure of gold, jewels, and other priceless artifacts have drawn untold numbers of adventure-seekers to exotic locales far and wide. Famous explorers once hiked through unknown forests for El Dorado—the famed Lost City of Gold—and scoured the North Carolina coastline for Blackbeard’s hidden fortune. Unfortunately, the “x” that marked the spot has proven elusive for the majority of these adventurers—until now.

One lucky treasure hunter recently unearthed a chest worth an estimated $2 million that was buried nearly a decade ago in the Rocky Mountains. Forrest Fenn, a wealthy antiquities collector, is the man behind the luxurious treasure. Inspired by the 2008 economic recession, he wanted to give hope to those who were affected by encouraging them to explore the outdoors. The answer was filling a Romanesque chest with precious gemstones, golden nuggets, and historic artifacts and burying it in an unknown location. Fenn publicized the existence of the treasure in his self-published book, The Thrill of the Chase: A Memoir, which features a 24-line poem that includes 9 different clues leading to the treasure’s location.

Over a quarter of a million people have eagerly hunted for this bounty since the challenge was first issued. Unfortunately, not every avid adventurer was spared the dangers of the terrain, and reportedly four people have died while hunting for Fenn’s box. But neither these dangers nor the map’s difficulty have ever stopped anyone from continuing their searches for this real-life “golden ticket.” That is, until Fenn’s recent announcement via blog post that his treasure had indeed been claimed.

The bounty was found by an anonymous person who confirmed his discovery to Fenn with a photograph of the unearthed loot. Fenn announced on June 6, “The treasure has been found.” According to Fenn, “It was under a canopy of starts in the lush, forested vegetation of the Rocky Mountains and had not moved from the spot where I hid it more than 10 years ago. I do not know the person who found it, but the poem in my book led him to the precise spot.” While the 89-year-old refuses to release where exactly the box was located, he promises that “the treasure [was] not hidden in a dangerous place. I hid it when I was about 80 years old.”

While the thrill of the chase for Fenn’s box may be over, the art dealer encourages those who hunted for the treasure to keep that spirit alive. “I congratulate the thousands of people who participated in the search and hope they will continue to be drawn by the promise of other discoveries.”

The decade-long hunt for Forrest Fenn's treasure chest that he buried in the Rocky Mountains is now over. Here's the map and poem with clues as to the treasure's whereabouts. 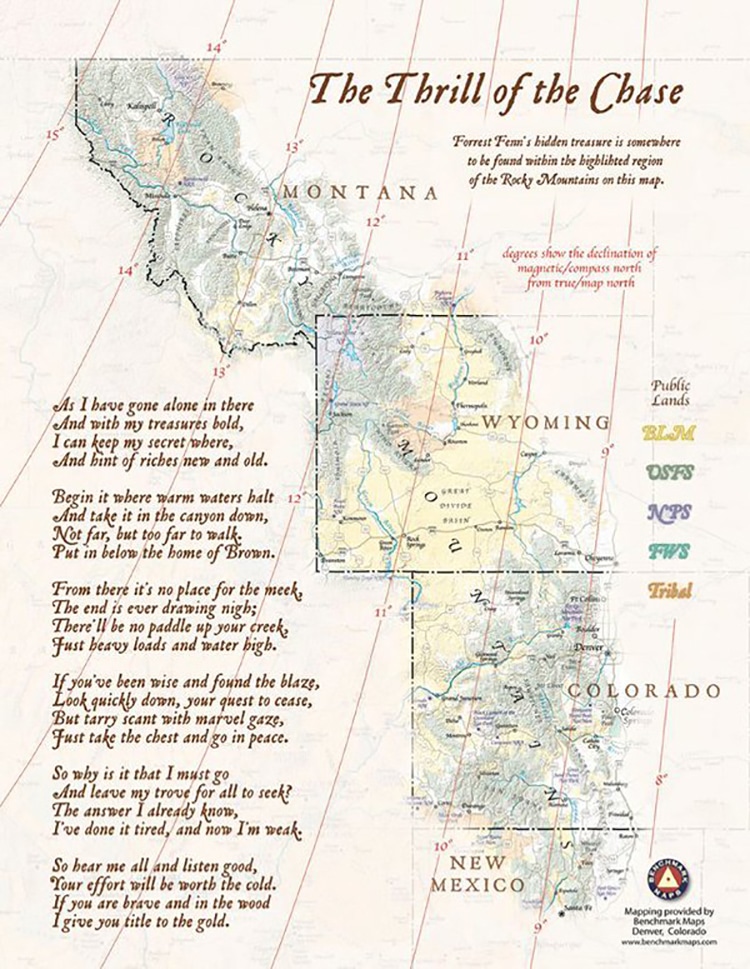 Fenn spoke about the hidden treasure, explaining its value and how he the location he chose actually means something to him.

Here's another look at the luxurious wares within the chest, which includes gold nuggets, precious gemstones, and ancient artifacts.

Here’s a neat picture of some of the contents of the chest from an early arrangement of the treasure. Make note of the gold nuggets, of which there over 100, the gemstones, and the artifacts. The two round objects in the center are 300 year old gold and silver hunting case minute repeater watches. These two items did not make it into the final cut of the chest’s contents. Not pictured are two 5 inch Pre-Columbia’s gold mirrors, the Tairona fetish necklace, the revered turquoise row bracelet, the antique gold dragon bracelet with 254 rubies, 6 emeralds, 2 ceylon sapphires, and much, much more. Interested in learning how to find the chest? Check out www.forrestfenntreasureguide.com for great information on the hunt or by clicking the link in the description.

All images via Forrest Fenn.

Nature-Inspired Embroidery Designs Capture the Magic of the Rocky Mountains