German artist Gerhard Richter is considered one of the most important contemporary artists alive today. He was originally trained as a realist painter, but he later developed a more abstract style that captures a mix of the movements that influenced him. Abstract Expressionism, Pop Art, Minimalism, and Conceptualism are all inspirations for Richter. In addition, he also had a lifelong fascination with photography and often rendered paintings that looked like photographs that were not quite in focus, offering only an incomplete view of the subject.

Richter began painting in the early 1950s when he studied at the Kunstakademie in Dresden. During this time, the East German Communist regime imposed a Social Realist style on all practicing artists. Richter was confined to painting landscapes and political banners commissioned by state-owned businesses. However, during the '60s, Richter moved to Düsseldorf in West Germany, where he had more freedom and began painting in a more expressive manner.

Throughout his 60+ year career, Richter created an equal amount of both abstract and realist works. And although the styles differ, one theme is constant: experimentation. The artist embraced the chance effects of the mediums he uses, allowing his process to determine the final outcome. “I want to leave everything as it is,” he says. “I therefore neither plan nor invent; I add nothing and omit nothing. At the same time, I know that I inevitably shall plan, invent, alter, make, and manipulate. But I don't know that.”

Read on to discover five of Richter’s famous works.

Here are five Gerhard Richter artworks you should know.

In 1966, Richter began painting uniform grids of solid colored rectangles or squares on a white background. He was inspired by a collection of paint sample cards he found in a hardware store in Düsseldorf. Captivated by the simplicity of the chromatically rich selection, he began copying the original colors exactly, choosing combinations at random. During the ‘70s, Richter stopped using paint chips as source material and began creating his own colors.

In an interview with author and editor Irmeline Lebeer in 1973, Richter explains, “Based on mixtures of the three primary colors, along with black and white, I come up with a certain number of possible colors and, by multiplying these by two or four, I obtain a definite number of color fields that I multiply yet again by two, etc.,”

The number of colors Richter produced varied. Some of his earliest works feature just four hues. However, in 2007, the prolific creative produced a giant artwork featuring 4,900 colors. Richter later revisited painting just four colors in 2008, marking the end of the decades-long series. 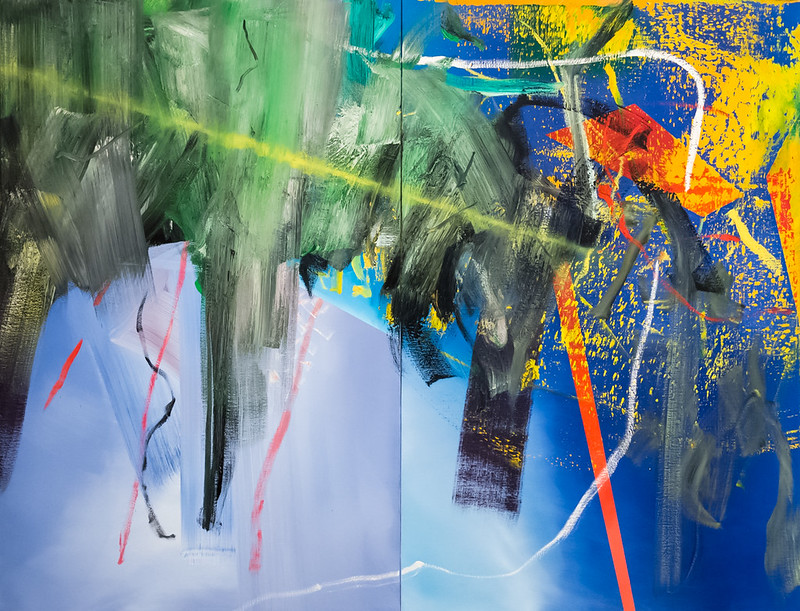 By the mid-'70s, Richter began painting a series of colorful abstract works featuring hazy tones and geometric shapes. Clouds, painted in 1982, is an example of how the artist often fluctuates between realist and abstract styles. As the title suggests, the bottom, left-hand side of the work perhaps represents soft clouds in the sky. However, vibrant, bold paint strokes and tracks interrupt the window-like view.  The two-panel, oil on canvas piece playfully entices the viewer to simply experience the beauty of the colors, textures, and shapes, without trying to extract meaning.

The series October 18, 1977 consists of 15 black and white paintings that Richter worked on between March and November 1988. Within the collection, the artist created three paintings titled Tote (Dead), based on photographs depicting the terrorist Ulrike Meinhof, a founding member of the Red Army Faction. The photos were taken after her suicide in prison in Stuttgart-Stammheim on May 9, 1976, and reveal a close-up of her head and upper body while she lies on the floor unconscious. Each Tote painting differs only very slightly, but they’re all rendered in Richter's distinct, hazy style, reminiscent of a blurry photograph.

The Red Army Faction was a left-wing extremist terrorist group that had been active in West Germany since the beginning of the 1970s. The group carried out various crimes against the state that included bank robberies, bomb attacks, and assassinations. They were eventually prosecuted by state police and collectively died by suicide in Stuttgart-Stammheim prison.

When the series was presented to the public, it was met with shock and scandal and divided opinion among Germans for years. Richter simply wanted to remember the events and shed a light on the truth. He said of the series, “It can give us new insights. And it can also be an attempt to console—that is, to give a meaning. It’s also about the fact that we can’t simply discard or forget a story like that; we must try to find a way of dealing with it—appropriately.”

Richter continued to produce bright abstract works throughout the 1990s. He was set on challenging the viewer to enjoy the pure elements of his work: color, gesture, and layers.

Many of these pieces (like this one) were made by sweeping fields of color into each other using his iconic squeegee or sponge technique. The artist enjoys allowing the process to define how the final piece will take shape. The spirit of experimentation is exactly what gives him exciting, unexpected results. “You should have a measure of uncertainty or perplexity,” Richter was quoted saying. “It is more interesting to be insecure.”

For Mortiz, Richter depicts his own infant son. Similar to the artist's earlier photograph-inspired works, it blurs the line between abstraction and figuration. Two seemingly unfinished areas of cloudy hues contrast against the realistically rendered portrait. It almost appears as though you’re looking through a fogged-up window, with the subject on the other side.

17 Artists Blurring the Line Between Painting and Photography