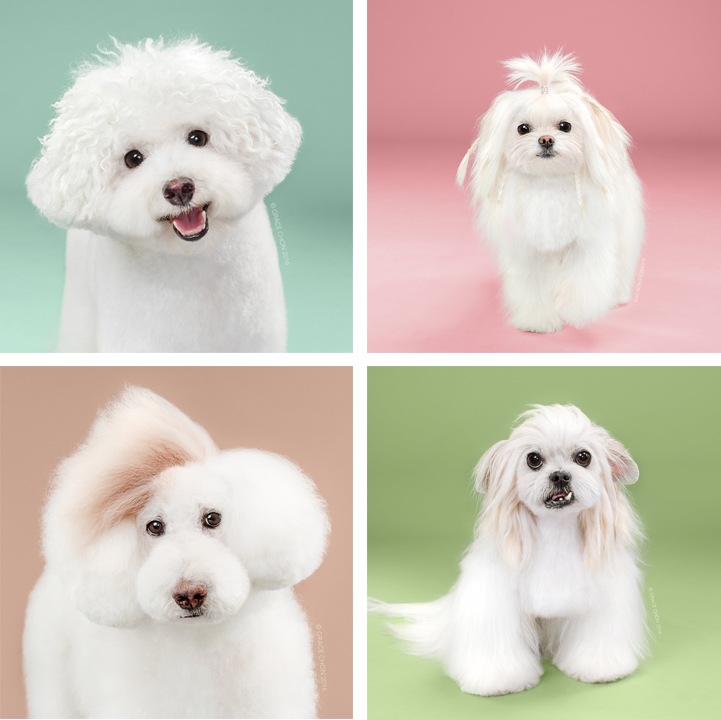 We love to see the “before” and “after” of makeovers, and animals are no exception. Dramatic transformations—especially ones involving appearance—offer a fascinating look at how a simple act can completely change how we view someone or something. Photographer Grace Chon explores this notion in her newest series called Hairy, where dogs—in desperate need of a shampoo—are washed and groomed to reveal the adorable pup hiding behind unkempt fur. Chon specifically focuses on Japanese-style grooming, which is a creative approach that favors whimsy over standard cuts and makes the dog resemble a stuffed toy.

Chon worked with groomers at Healthy Spot in Los Angeles (many of whom specialize in this style) to bring this series to life. The results are striking—the dogs go from drab to fab in a matter of hours. Their untamed fur is braided, fluffed, and contoured, and when it’s all over, they look like dolls. But considering that these are real live pups, the precision and artistry achieved by the groomers is impressive.

Alice Yoo, founder of My Modern Met and now at Adventures of Yoo, talked to Chon about her delightful project. Read her interview, below.

Athena: Before | After
Grooming: Donna Owens

Herman: Before | After
Grooming: Cindy Reyes

Yuki: Before | After
Grooming: Alyson Ogimachi

Teddy: Before | After
Grooming: Donna Owens

Rocco: Before | After
Grooming: Patricia Sugihara

Raider: Before | After
Grooming: Koko Fukaya

Lana: Before | After
Grooming: Koko Fukaya

What made you want to start this new series? How did it come about?
I think a lot of us have a fascination with before and after images because it's always fun to see dramatic transformations. I had the idea of doing a before and after series with dog grooming because there's something about it that's so funny to me. Sometimes the dog looks so different and you wonder if it's the same dog in both images. I wanted to capture that idea in the series, and have the after photos be really extreme by showing Japanese Dog Grooming cuts since they aren't that common and the results are so striking.

How much time and effort went into cutting the dogs' hair?
These cuts truly are works of art – each haircut takes about 2 hours or more, as the majority of the styling is all done with hand scissoring.

Can you describe the Japanese style of grooming?
The emphasis of this style of grooming is to make the dog look as adorable as possible by highlighting the uniquely cute characteristics of the dog. My personal take on it is that they make the dogs look almost like stuffed animals – cute overload!

What did you learn from shooting the series?
Grooming is definitely an art form. I don't have dogs that get groomed, but watching the groomers up close made me realize how much time and dedication goes into a cut especially when the majority of it is being done by hand with scissors. The groomers I had the pleasure of working with are so creative and great at what they do.

My Modern Met granted permission to use photos by Grace Chon.