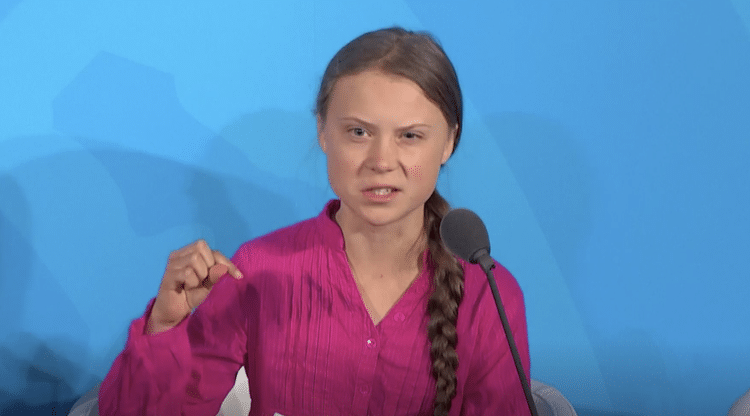 On September 23, 2019, the United Nations held a Climate Action Summit at its headquarters in New York City. Here, dozens of world leaders and policymakers met to discuss plans for curbing climate change, which were outlined and emphasized by guest speakers like French president Emmanuel Macron and Germany’s Chancellor Angela Merkel. It was not the words of these high-profile politicians, however, that resonated most with viewers; instead, it was a powerful speech by 16-year-old activist Greta Thunberg.

“My message is that we'll be watching you,” Thunberg's impassioned address begins. “This is all wrong,” she continues, “I shouldn't be up here. I should be back in school on the other side of the ocean. Yet, you all come to us young people for hope. How dare you!” As she continues, Thunberg accuses the world's leaders of not only ignoring decades' worth of well-researched warnings, but of prioritizing finances over the well-being—and even existence— of future generations.

“You have stolen my dreams and my childhood with your empty words and yet I'm one of the lucky ones,” she says with tears in her eyes. “People are suffering. People are dying. Entire ecosystems are collapsing. We are in the beginning of a mass extinction and all you can talk about is money and fairytales of eternal economic growth. How dare you!”

Interrupted by cheers, Thunberg spoke for four minutes. She spent much of her time on stage condemning the “popular idea of cutting our emissions in half in 10 years.” In her speech, Thunberg notes that this agreed-upon objective is both lacking in detail and fiscally unrealistic, making it an inadequate solution to the increasingly urgent climate crisis.

Thunberg ends her emotional plea with a warning: “We will not let you get away with this. Right here, right now is where we draw the line. The world is waking up and change is coming, whether you like it or not.”

As it turns out, “right here, right now,” was no exaggeration; shortly after delivering the speech, Thunberg and 15 other youths filed a complaint with the United Nations claiming that five of the world's major economies—Argentina, Brazil, France, Germany, and Turkey—have committed human rights violations by failing to take adequate steps to stop climate change.

As she and the other youth activists delivered the petition across the street from the summit, Thunberg echoed the sentiments of her speech. “The message that we want to send is that we've had enough.”