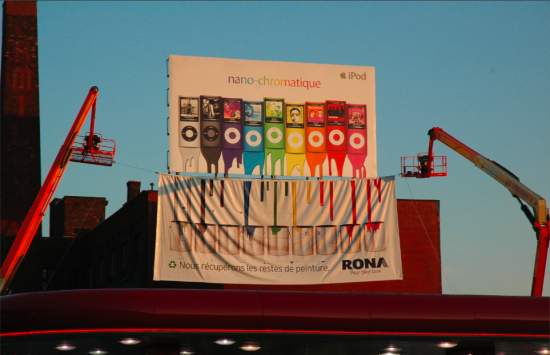 A spectacularly brilliant idea! Rona, the largest Canadian retailer and distributor of hardware, renovation and gardening products, recently announced their used paint recovery program across its stores. “This new program for municipal hazardous or special waste, often called ‘household hazardous waste,' will help ensure that consumer products such as left over paints and solvents are collected so they can be reused and recycled,” said Glenda Gies, Executive Director of Waste Diversion Ontario. “RONA is playing an important role by accepting leftover paint at their Ontario retail locations.” In their advertising effort, they backpacked on top of Apple's billboard which showed dripped paint coming off of Apple's Nano. The RONA tagline reads, “Nous recuperons les restes de peinture.” Which translated from French to English says, “We collect leftover paint.” Did you notice that Rona matched up all the paint colors correctly? Almost as good as the BMW/Audi billboard fight, wouldn't you say? Via NotCot via Fubiz