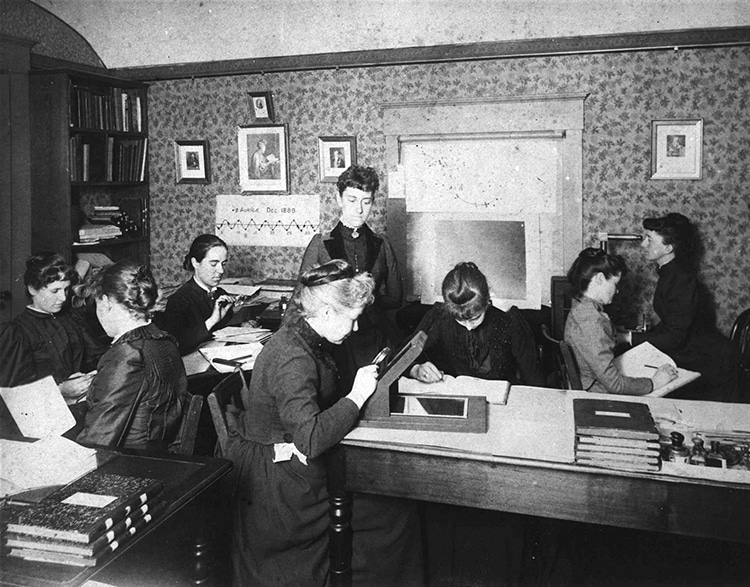 The Harvard Computers at work, circa 1890. Henrietta Swan Leavitt, Annie Jump Cannon, Williamina Fleming, and Antonia Maury were all working at the Observatory at the time. (Photo: Wikimedia Commons, Public domain)

Edward Charles Pickering, the male director of the observatory, began hiring women to crunch numbers in his quest to document all of the stars in the sky. These human “computers” have been largely consigned to the footnotes of history, but their contributions to astronomy helped catalog and map over 400,000 stars and helped to build the foundations of modern astronomy.

Read on to learn more about the fascinating Harvard Computers.

The Beginnings of the Harvard Computers 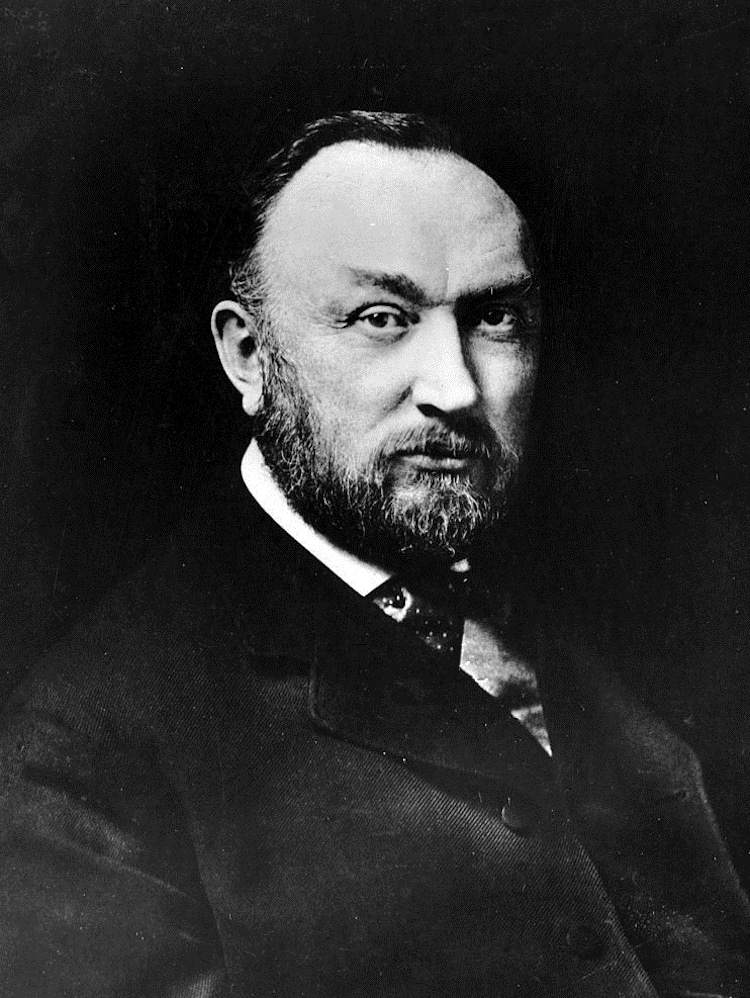 Harvard alumni and former MIT professor Edward Charles Pickering was hired as a professor of astronomy and director of the Harvard College Observatory in 1876. Pickering was invested in the study of photometry—measuring how bright stars and other space objects are. The brightness of a star can shed light on its size, composition, temperature, distance, and more. Using the still rather new and clumsy medium of photography, the new director collected thousands of glass plate images of the skies.

Although before 1875 some women likely had assisted in the work of the observatory, male assistants were the norm. However, Pickering found himself frustrated with the pace of these assistants as they analyzed the images of stars. Given it was generally considered unnecessary or even detrimental to allow women opportunities for advanced study, Pickering was not looking for degrees but rather a natural gift for numbers.

One of the first women computers hired by Pickering was Selina Bond, a woman with familial connections to the observatory. Working from home, she crunched numbers for Pickering. Many of the earliest women computers hired had such attachments to male astronomers, providing a way into a primarily-male world. In the late 19th century, many middle and upper-class women were educated but to pursue collegiate or academic pursuits was still rare. A supportive family with a history in academia was one of the few ways to enter such a male world. (For example, famous scientist Marie Curie's parents were both educators.) Women's colleges were also still in their infancy, so opportunities were exceptionally limited. Radcliffe—all-male Harvard's sister school—was founded in 1879. 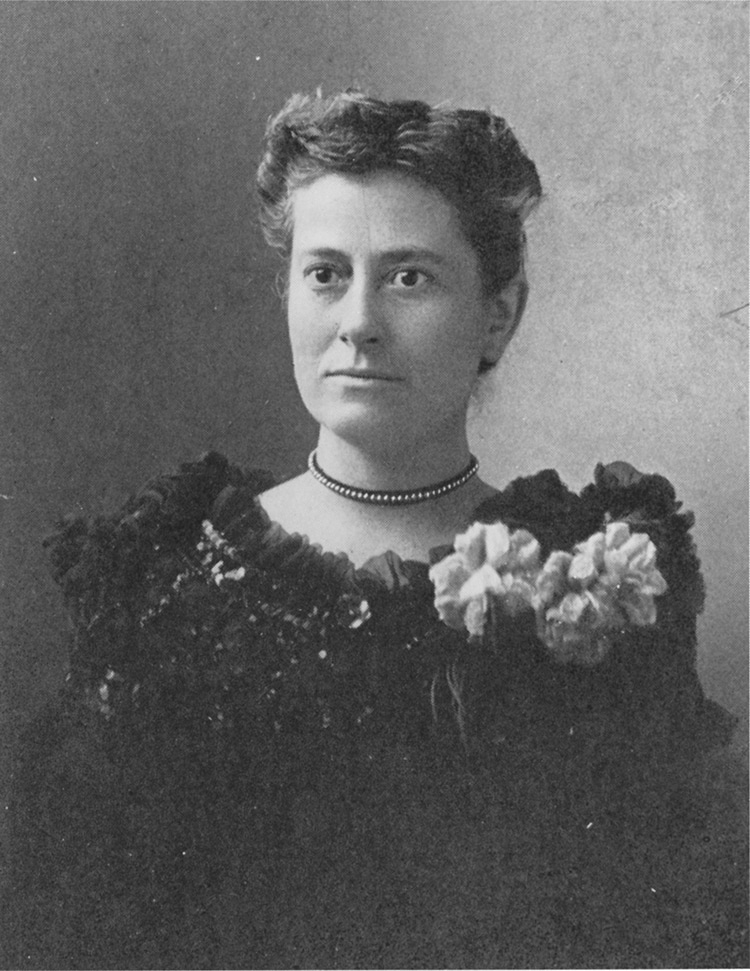 Pickering found a talent for numbers in his maid, a recent Scottish immigrant and mother whose husband had abandoned her. Williamina Fleming had been a teacher in Scotland, but by necessity took a housekeeping job to survive in Boston. In 1881, Fleming joined the Harvard Computers at work in the Observatory. She quickly learned from the other women. By 1885, she was in charge of the team, working alongside Pickering to develop the famous Henry Draper Catalogue of stars, which lists thousands of stars cataloged by their spectrum.

Her career at the observatory would last 30 years. Among her many discoveries were the Horsehead Nebula, the first white dwarf, and over 310 variable stars. She advocated for women in astronomy in a speech at the 1893 World's Fair in Chicago, arguing that if given the opportunity, women could match men's achievements. Her work was subsumed under Pickering's name until the early 20th century when she was, at last, given some credit in astronomical circles.

Fleming's diaries have since been studied and provide a window into the world of these early women astronomers. The women were paid between 25 to 50 cents an hour and worked six days a week. The rate they earned was only half that of a man doing the same job, something Fleming herself noted in her accounts. She wrote, “I am immediately told that I receive an excellent salary as women’s salaries stand… Does he ever think that I have a home to keep and a family to take care of as well as the men?… And this is considered an enlightened age!”

Among the other women to work at the observatory was Antonia Maury, a niece of astronomer Henry Draper after whom the catalog was named. An 1887 graduate of Vassar College, she joined the Harvard Observatory and began analyzing the data associated with spectroscopic binaries, or double stars. She discovered Beta Aurigae, a binary star system. She also created her own classification system for stars, which was more detailed than Pickering's and which was eventually adopted in a modified form by the International Astronomical Union.

Unfortunately, Maury's work calculating the orbits and periods of the spectroscopic binaries was only mentioned in one brief line in Pickering's monumental published paper. She expressed her frustration with the devaluation of her work, “I do not think it is fair that I should pass the work into other hands until it can stand as work done by me. I worked out the theory at the cost of much thought and elaborate comparison and I think that I should have full credit for my theory of the relations of the star spectra and also for my theories in regard to Beta Lyrae.” She would eventually return to work at the observatory (several times), with work published in her own name. 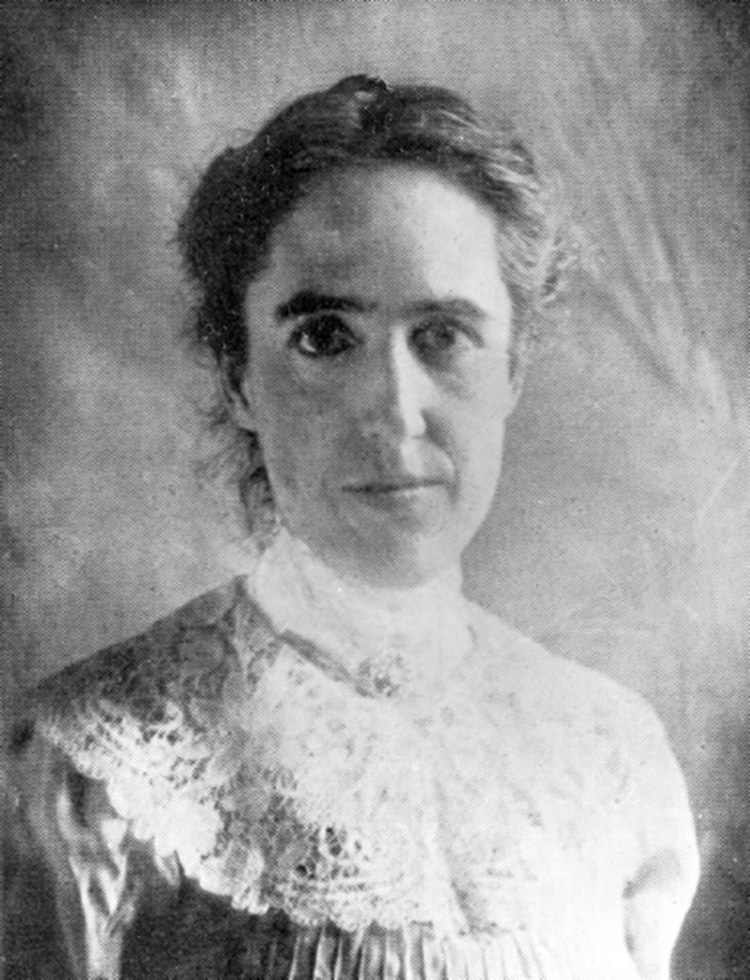 Fellow computer Henrietta Swan Leavitt had begun her studies at Oberlin College, but she transferred to Radcliffe before graduating in 1892. After graduation, she began work in the observatory. By 1898, she had become Curator of Astronomical Photographs, technically a staff position at the university. She studied the Small and Large Magellanic Clouds as well as variable stars, publishing much of her work in her own name.

Leavitt's published work in the 1910s led to what is known as Leavitt's Law. She discovered the period–luminosity relationship for Cepheids (variable stars with a regular cycle of brightness). This relationship was revolutionary, as it provided a metric by which the distance to faraway galaxies could be measured. Her work was built on by Ejnar Hertzsprung, and would eventually allow Edwin Hubble to pursue his pioneering exploration of the universe.

Annie Jump Cannon joined the Harvard Computers in 1896. With her undergraduate degree in physics from Wellesley College, she was at Havard to pursue her graduate degree. The brilliant suffragist was instrumental in helping Pickering create the Harvard Classification Scheme for stars. She classified over 350,000 stellar bodies during her long career (she retired in 1940). She was the first women to ever receive an honorary doctorate in science from Oxford University. Two years before her death, she was named the William C. Bond Astronomer at Harvard (the college of which was still all-male at the time). 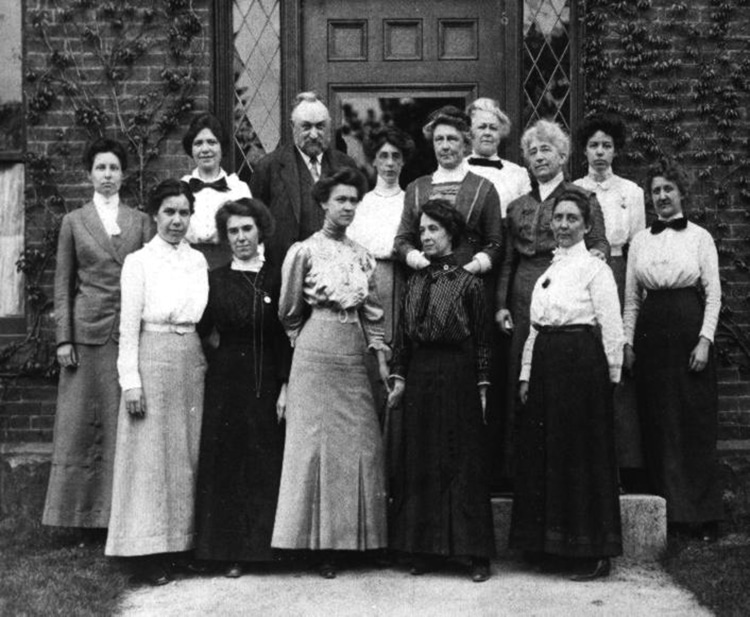 Over 80 women worked among the Harvard Computers during Pickering's tenure from 1877 to his death in 1919. The work was, by all accounts, fairly monotonous and involved preparing photographs and the subsequent analysis. The data crunching was necessary, but also limiting. Few women were allowed to use the telescope—a fact which largely barred them from further developing theoretical work. As Natasha Geiling called the Harvard Computers in Smithsonian Magazine in 2013, “the women who mapped the universe and still couldn’t get any respect.”

Today, the women Harvard Computers are finally receiving some of their long-deserved recognition. Harvard's Project PHaEDRA is a collaborative effort to collect, transcribe, and mine for genius the works of these early astronomers. Cannon took over the direction of research in 1919 after Pickering's death, and women researchers continued to be integral (yet undervalued in academia) at the Harvard College Observatory through the 1950s. These pioneers of astronomy pushed the boundaries of math and physics as well as what was expected of women in society. Hopefully, their efforts will be remembered in classrooms around the world for bringing the dark corners of the universe to light.