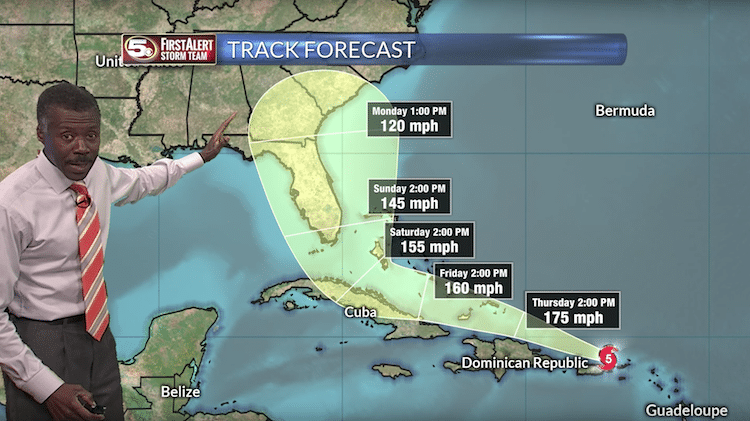 Hurricane season in the United States is in full force. Hurricanes Harvey and Irma have recently ravaged parts of the south, most notably Texas and Florida. Meteorologists have, understandably, taken a dire tone in their forecasts to prepare residents of these areas for the worst-case scenarios. Often times, however, they veer from being helpful and informative into sensationalism, reporting from places that they’ve explicitly told everyday people to evacuate. As a result, it offers little in the way of useful coverage. Mobile, Alabama-based Chief Meteorologist Alan Sealls recently took a different approach to giving a hurricane report. Rather than play to emotions, he gave a calm and straightforward assessment of three impending storms, including Irma, which was then poised to hit landfall.

Although it might seem like meteorologists have a crystal ball, they can’t completely predict how a storm is going to unfold. During his forecast, Sealls reiterated this fact—that the models and projections he was showing viewers “don’t control the storm.” He offered an explanation, stating, “That's the attempt to keep up with what's going on, calculate, and generate another projection.” Upon adding the caveat that conditions will change, he also remained serious about those in Irma's path to evacuate or take shelter.

The four-minute clip of Sealls has made its way far beyond the Mobile area. His articulate, well-informed, and thorough reporting was a breath of fresh air to many, and it landed him on the front page of Reddit. The attention brought to Sealls’ demeanor shows that, in these unpredictable situations, having a helpful expert is seriously comforting. A meteorologist needn’t be dramatic or goofy to deliver the weather—they simply need to show us the science.

Many recent hurricane reports for Harvey and Irma have bordered on sensational, championing drama over facts.

Meteorologist Alan Sealls took a different approach; he delivered the hurricane report for Irma in a calm, informed demeanor.

Now, he's being called the “best weatherman ever” by Reddit. Watch below:

Winning Images from the Underwater Photographer of the Year Contest