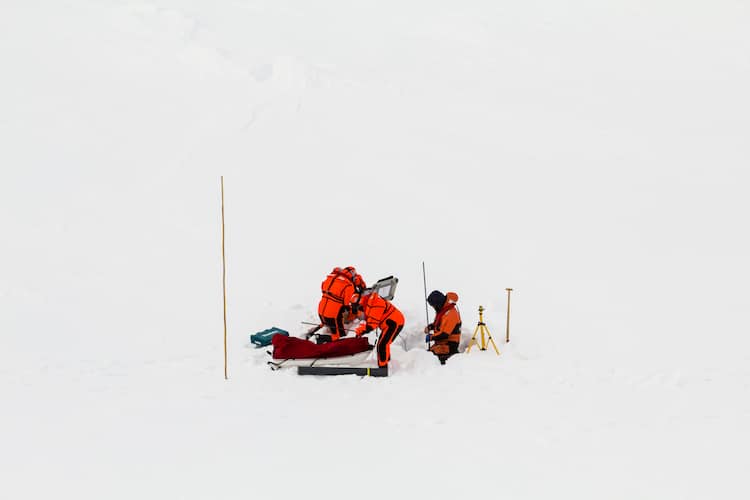 Stock Photos from I. Noyan Yilmaz/Shutterstock

Princeton University researchers are currently in the Antarctic, drilling holes hundreds of feet deep in order to learn more about climate change. The team has been extracting ice cores that are thousands (and even millions) of years old to provide information on Earth’s climate from all that time. While the team is carrying out important research, they’re also making time to have a little fun. Geochemist John Andrew Higgins recently shared a video on Twitter, revealing the surprising sound ice makes when it’s dropped down a 450-foot (137-meter) hole.

You might expect to hear thunks and thuds, but Higgins’ video reveals an entirely unexpected sound. As the block of ice falls further into the abyss, it sounds like an intergalactic laser gun battle is happening far below, with high-pitched “pew pews!” pinging loudly. Higgin’s was inspired by fellow researcher Dr. Peter Neff at the University of Washington. He had the idea of dropping the ice down a 295-feet-deep (90-meter-deep) borehole in 2018, and shared a similar, now-viral video.

The strange sound is the result of a phenomenon known as the “Doppler Effect.” Sound waves compress as they get closer and stretch out when they get further away, lowering the frequency and pitch. “When the ice hits the bottom of the borehole, the sound doesn’t only come straight up—the sound waves start to bounce off the sides of the hole,” explains Neff in a video. “That’s why you hear this ‘pew!’”

What does a 9 inch ice core sound like when dropped down a 450 foot hole? Like this! Credit to @peter_neff for the idea and @Scripps_Polar, @sciencejenna, @GeosciencesPU, @US_IceDrilling, and @paleosurface for the execution! pic.twitter.com/pW7LxKdbUB

Here’s the story on this crazy sound (V1), plus the basic science @blueicehiggins, myself, & others do studying past climate with #Antarctic ice cores. 🇦🇶🧊❄️ pic.twitter.com/QAtjcxXXGh

All photos via John Andrew Higgins.

Pew pew! Share
Like My Modern Met on Facebook
Get Our Weekly Newsletter
Become a
My Modern Met Member
As a member, you'll join us in our effort to support the arts.
Become a Member
Explore member benefits
Pew pew!