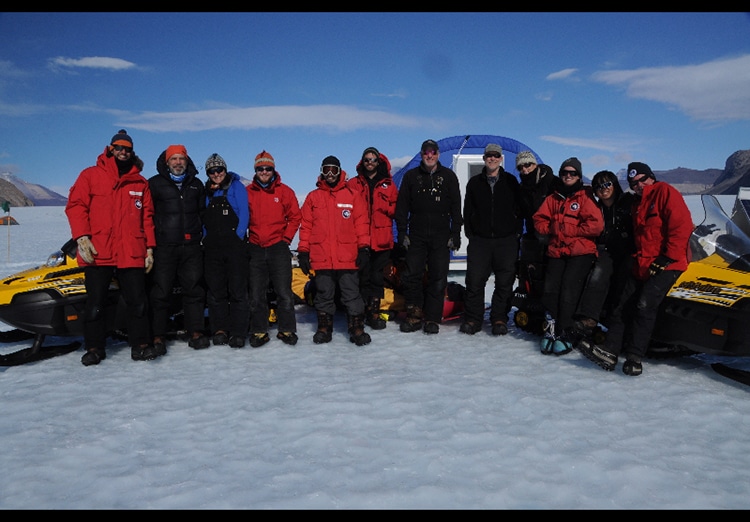 A group of University of Rochester scientists are currently studying the effects of global warming by drilling ice cores from 800,000-year-old Antarctic ice. Over time, layers of snow can compact under their own weight, forming strata that encapsulate past climates.“We use ancient air trapped in glacial ice from Greenland and Antarctica to learn about how the concentrations and isotopic composition of greenhouse gases and reactive gases have varied in the past, and what these changes tell us about Earth’s climate and atmospheric chemistry,” explains the University of Rochester Ice Core Lab.

Although the team is carrying out important research, the group still makes sure to have a little fun every once in a while. After the hard labor of making the boreholes, some of the scientists decided to see what would happen if they dropped chunks of ice into the abyss. Little did they know that their spontaneous playtime would lead to a serendipitous discovery: super cool noises. One of the scientists on the expedition—Dr. Peter Neff, a postdoctoral researcher—shared their fun discovery on Twitter saying, “When science is done, it's fun to drop ice down a 90 m deep borehole in an Antarctic glacier. So satisfying when it hits the bottom.” Taking around 5-10 seconds for the block of ice to reach the base, the videos record a spectacular “pew” sound, along with giggles of glee from onlookers.

You can follow the group’s adventures and progress via their expedition blog.

A group of University of Rochester scientists are currently studying the effects of global warming by drilling ice cores from 800,000-year-old Antarctic ice.

How to drill a shallow ice core:
(w/ @RochesterIceLab @heidiroop)

3.Find 2 friends. Only need 1 but unsolicited advice from 2nd is great.

But after the hard work has been done, the team had a little fun by dropping chunks of ice into the glacial abyss.

When #science is done, it's fun to drop ice down a 90 m deep borehole in an #Antarctic 🇦🇶 #glacier ❄️. So satisfying when it hits the bottom.

Little did they know that their spontaneous playtime would lead to to a serendipitous discovery: super-cool noises.

Lest you think we were able to control our glee while putting #Antarctic #glacier ice back in the borehole it came from… pic.twitter.com/hjLyZe8Bms

Image of the audio tracks of the sound the Ice Drop made. The “rifle bullet” sound is highlighted. pic.twitter.com/bf6nJYzxVU

Katabatic winds at Taylor Glacier, Antarctica 🇦🇶, falling off the East Antarctic Ice Sheet. Looks peaceful, but they're like a force of gravity. Drop a glove & it will be gone forever before hitting the ground! pic.twitter.com/xokbtLNBJz

But you only have one hole to worry about, @jchillerup! And ours can swallow a small human! @heidiroop pic.twitter.com/qs16H02RBF

All images via University of Rochester Ice Core Expedition Blog and Peter Neff.