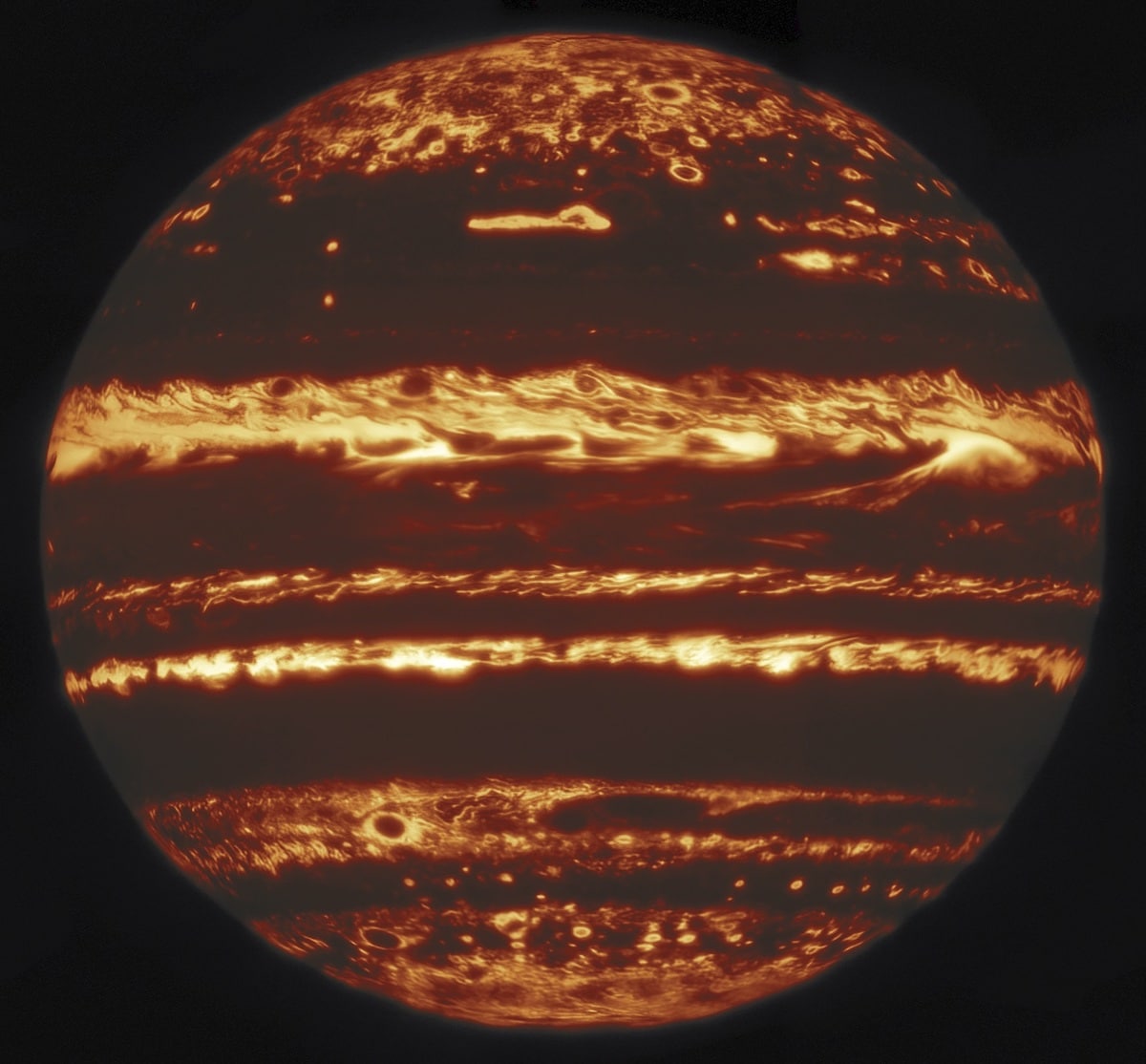 In an incredible show of teamwork, several organizations have collaborated to create a view of Jupiter like no other. By pooling information from NASA's Juno probe, the Hubble Space Telescope, and the Gemini Observatory, researchers were able to puzzle together a photo that gives us new insight into the planet's storm systems. The striking infrared photograph of the gaseous planet shows it glowing with activity.

For three years the National Science Foundation's NOIRLab has been taking infrared images that probe deep into Jupiter's cloud cover. This work was combined with optical and ultraviolet observations by Hubble and radio observations by Juno to bring a new view of Jupiter to light. Juno's radio observations have helped researchers map Jupiter's powerful lightning. These maps were then combined with the visible light imagery of the Hubble and the infrared images taken by the Gemini for this incredible glowing photograph.

The work done at the Gemini Observatory in Hawaii was critical to the success of the project. As the largest and most advanced telescope available to astronomers, it's capable of making observations in extremely high resolution. To put together this particular photo of Jupiter, researchers used a technique called “lucky” imaging. This involves taking a number of short exposure images and then using only the sharpest ones that were taken when the Earth's atmosphere is stable. The result is a tack-sharp photo that could rival what's taken from space. 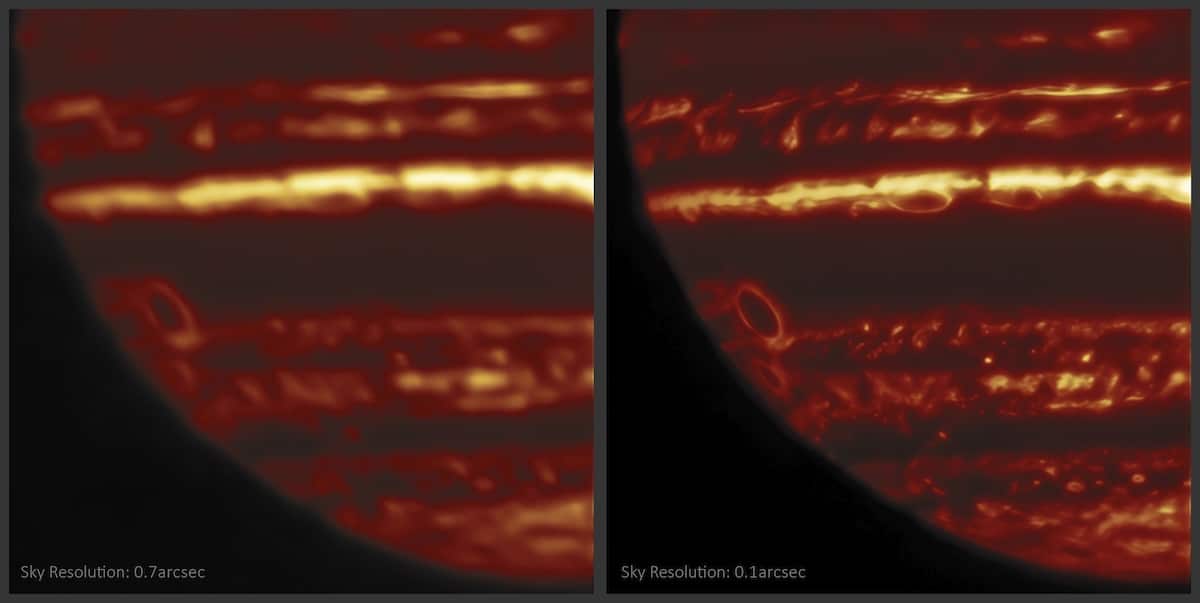 Incredibly, scientists were able to see that the dark spots in Jupiter that were thought to be color variations are actually just gaps in the cloud cover. “It's kind of like a jack-o-lantern,” says lead searcher Michael Wong of the University of California, Berkeley. “You see bright infrared light coming from cloud-free areas, but where there are clouds, it's really dark in the infrared.”

In fact, the photo has even unlocked a mystery about Jupiter's famous Great Red Spot. Visible-light observations couldn't distinguish between darker cloud material and thin cloud clover, so their makeup remained a mystery. Now, using these combined efforts, the mystery has been solved.

Infrared images reveal a bright arc that lights up the area. This infrared glow comes from Jupiter's internal heat and would be blocked by thick clouds. That means that the Great Red Spot is simply an area where there are gaps in the clouds, which allows for the glow to pass through Jupiter's hazy atmosphere.

It's an exciting time for these researchers, who are seeing years of hard work and collaboration pay off. “These coordinated observations prove once again that ground-breaking astronomy is made possible by combining the capabilities of the Gemini telescopes with complimentary ground- and space-based facilities,” says Martin Still, an astronomy program director at the National Science Foundation, which is Gemini’s US funding agency.

A visible-light image of Jupiter taken by the Hubble telescope was combined with information from the Gemini Observatory to create an unparalleled view of the planet. 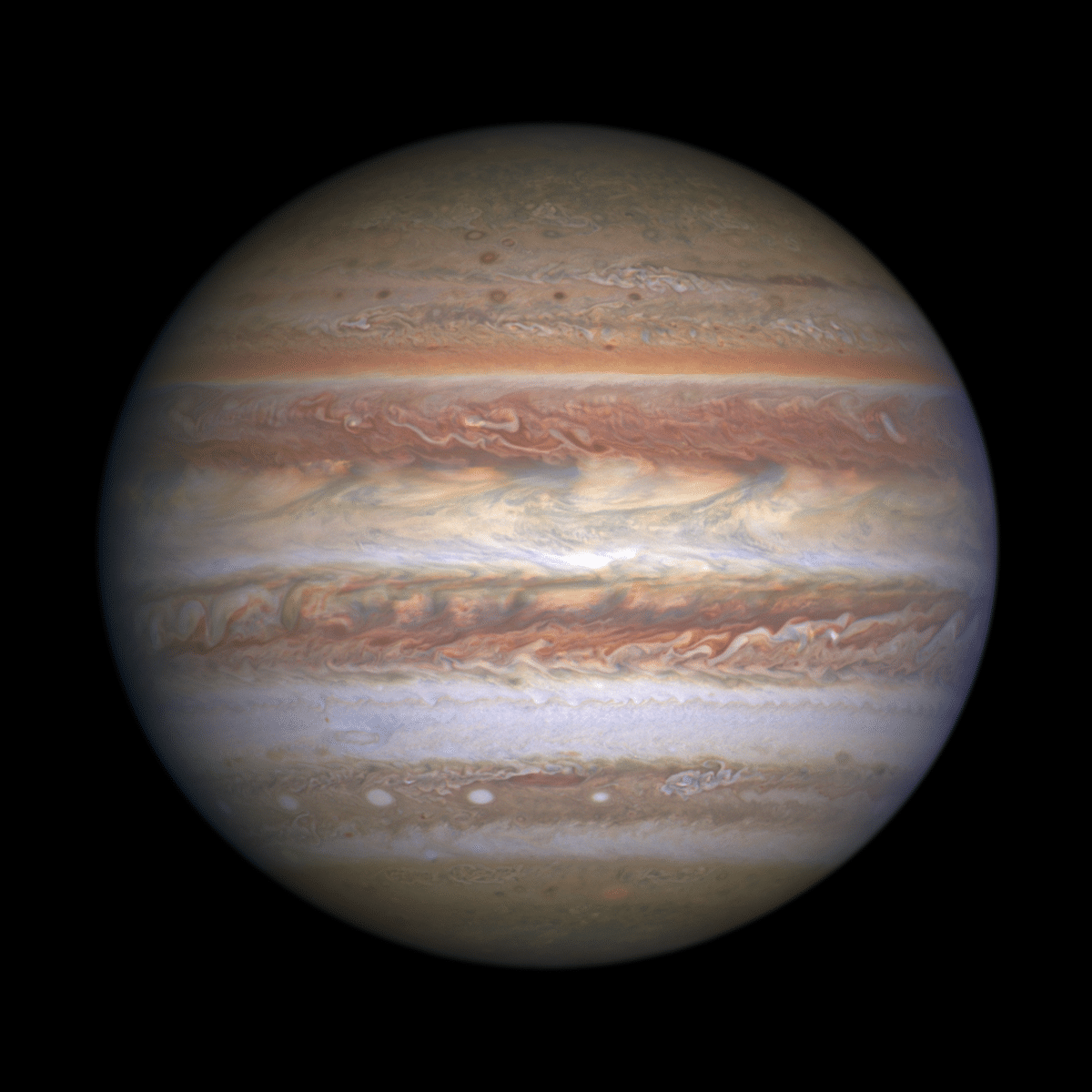 Love the glow of Jupiter? Share
Like My Modern Met on Facebook
Get Our Weekly Newsletter
Become a
My Modern Met Member
As a member, you'll join us in our effort to support the arts.
Become a Member
Explore member benefits