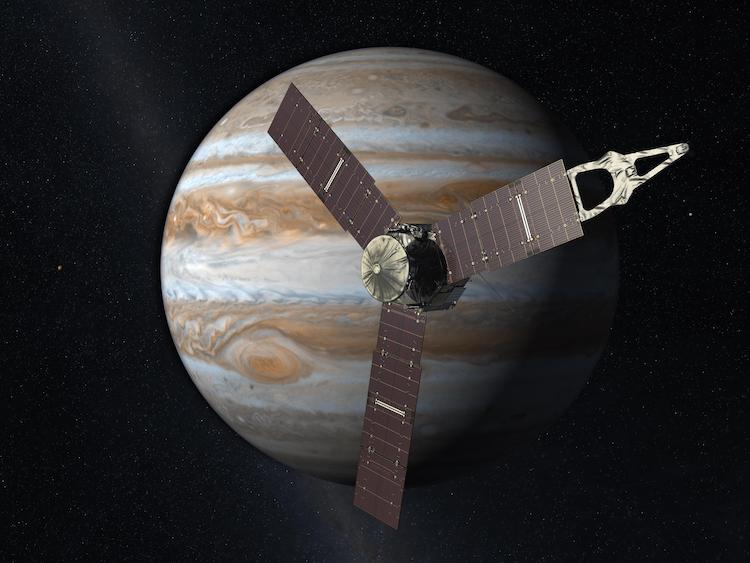 Why study Jupiter? Being the largest planet in our Solar System, scientists believe it to be the cornerstone of planet formation. Its huge mass clearly has an influence on other planets, asteroids, and comets, so an in-depth understanding of Jupiter will help us comprehend all planets. Juno's missions will specifically be looking to see when Jupiter was formed, helping untangle competing theories about its history.

Juno isn't the first space probe to look into the giant planet, though. For eight years, until 2003, the Galileo spacecraft carried out research about Jupiter. However, the Juno probe is unique in that it's powered only by solar panels, something more commonly used in satellites orbiting Earth.

As of May 2019, the spacecraft has completed twenty flybys of Jupiter, which are known as perijoves. Traveling 2,700 miles over the planet's cloud tops, Juno races at a speed of 129,000 miles per hour during these missions. It takes 53 days for Juno to orbit the planet, collecting important data about Jupiter's atmosphere, magnetic and gravity fields, its auroras, and water contents.

Already, interesting discoveries have been made. For instance, scientists have realized that Jupiter's magnetic fields are much more complex than previously thought. In fact, the Juno mission has made the first definitive discovery of a planetary magnetic field that changes over time. It's a discovery that was only possible due to the high accuracy of Juno's instruments. 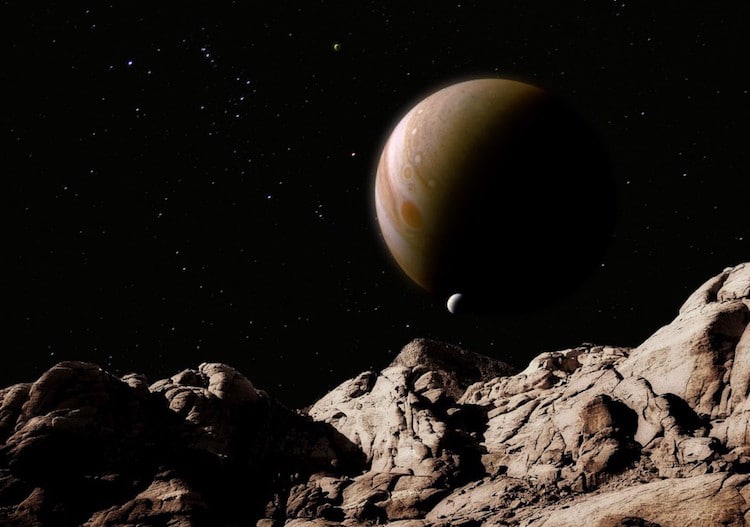 An imagined view from a small, rocky object near Jupiter. Alongside the JunoCam photograph of Jupiter, this image composite includes Galileo images of Europa and Io. (Photo: InvaderXan / supernovacondensate.net)

Facts About the Juno Mission

NASA's Juno mission is breaking boundaries in many ways. Its cutting edge technology is allowing it to learn more than any previous mission about Jupiter, giving scientists unparalleled information about the planet. To give a sense of how revolutionary the mission is, here are some top facts about the Juno space probe. 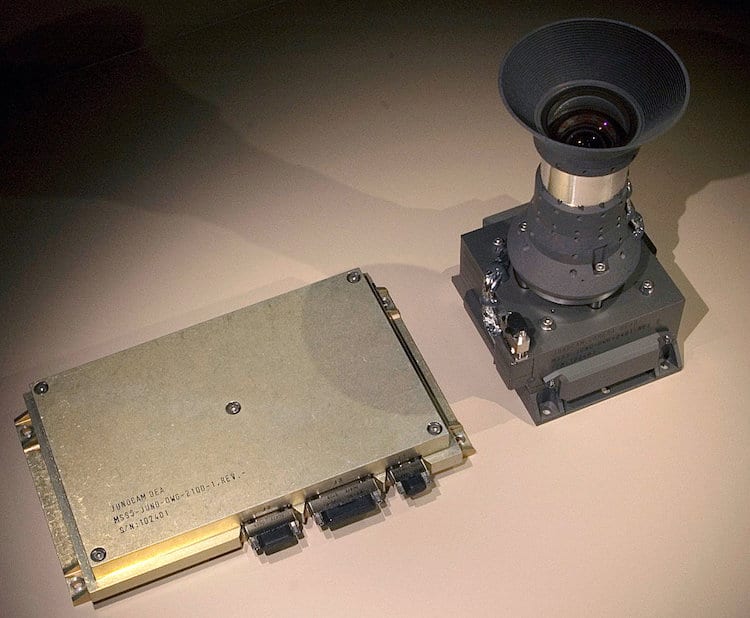 What is the JunoCam?

The JunoCam is a visible light camera and telescope that beams back images of Jupiter taken from the Juno probe. Specifically, its images are used in public outreach, with the RAW images published for amateur astronomers to download and post-process. In fact, most of the photographs in this article were retouched by people following Juno's course.

The JunoCam has a 58-degree field of view with four filters, allowing for unprecedented images of Jupiter. “Junocam is a wide-angle camera designed to capture the unique polar perspective of Jupiter offered by Juno’s polar orbit. Junocam’s four-color images include the best spatial resolution ever acquired of Jupiter’s cloud tops,” write researchers in a paper for the Southwest Research Institute. “Junocam is on the spacecraft explicitly to reach out to the public and share the excitement of space exploration. The public is an essential part of our virtual team: amateur astronomers will supply ground-based images for use in planning, the public will weigh in on which images to acquire, and the amateur image processing community will help process the data.” 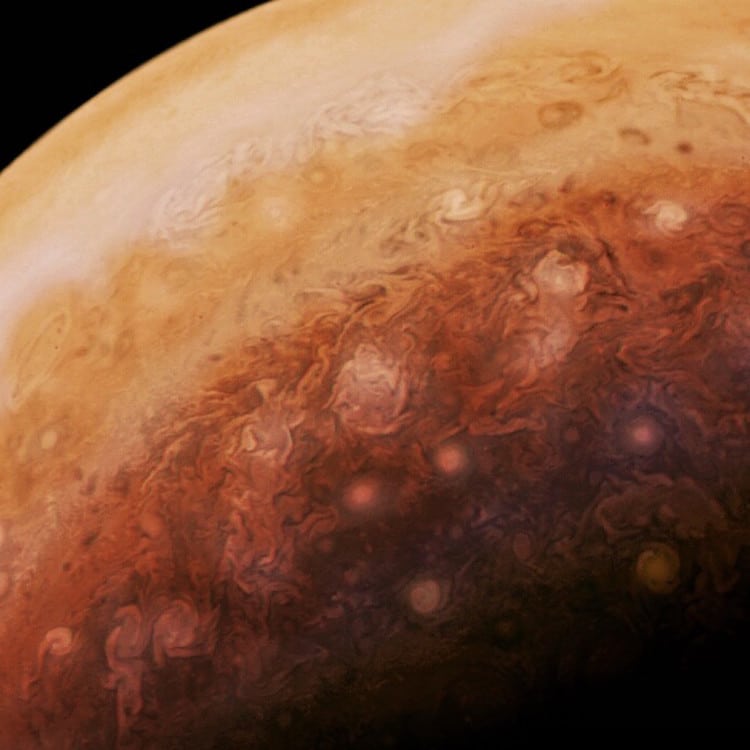 A fictional work, paying homage to one of the cultural icons of science fiction. Millennium Falcon image from “The Empire Strikes Back” film. (Photo: NASA/SwRI/MSSS/Shawn Handran)

How can I help NASA?

Public outreach is fundamental to the Juno probe's missions. NASA asks that professional and amateur astronomers upload telescopic images of Jupiter in order to help them plan upcoming missions. There is even a list of planned observations to help you figure out what information NASA is looking for.

If you are instead interested in photography, all of JunoCam's RAW images are uploaded and free for the public to use in post-processing. NASA encourages creativity as well, with fictional Millennium Falcon inspired images in their featured gallery. It's this true interactive exchange of information that makes the Juno mission unique. In fact, every time Juno is in orbit and taking photos, the public can vote for their favorite captures. 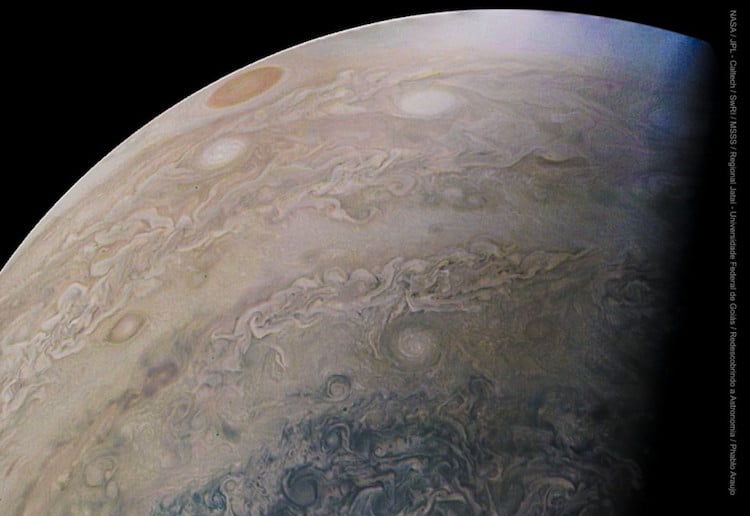 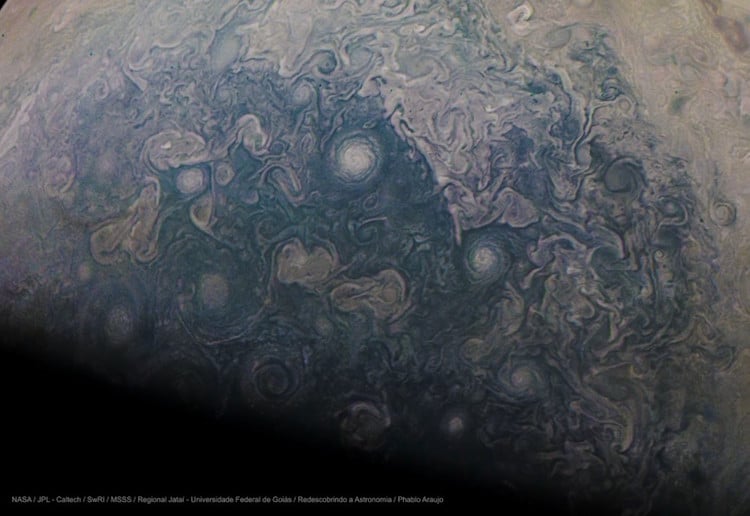 What's next for the Juno space probe?

Juno was originally set to complete its mission in 2018. However, the mission has been extended and now the groundbreaking probe won't descend into Jupiter's atmosphere until July 2021. This will give it the chance to complete Juno is set to continue flybys until it descends into Jupiter's atmosphere in 2018 after 37 perijoves. Its descent into the atmosphere will cause the space probe to disintegrate, which should control debris. Juno's next flyby—its 21st—is set for July 21, 2019, so stay tuned for more incredible images of the Solar System's largest planet.

Here are some of the incredible photos that the Juno probe has sent back from Jupiter. 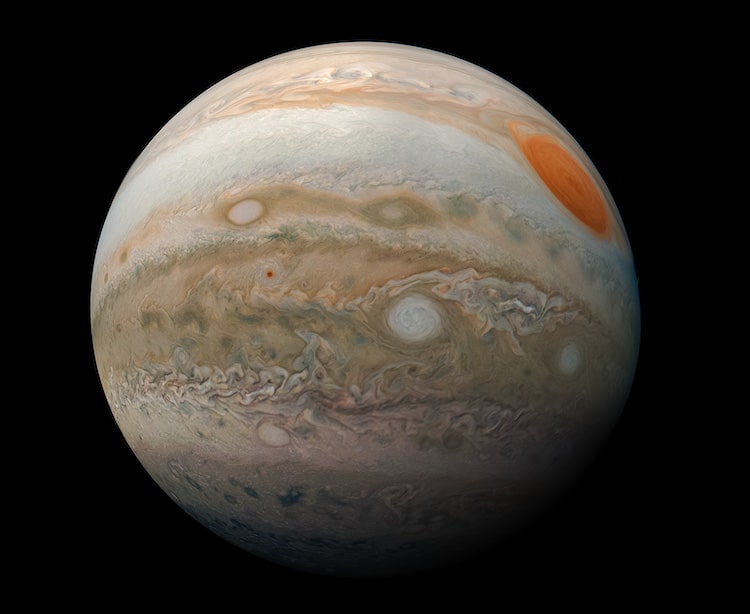 View of Jupiter’s Great Red Spot and turbulent southern hemisphere was captured by NASA’s Juno spacecraft as it performed a close pass of the gas giant planet. (Photo: NASA) 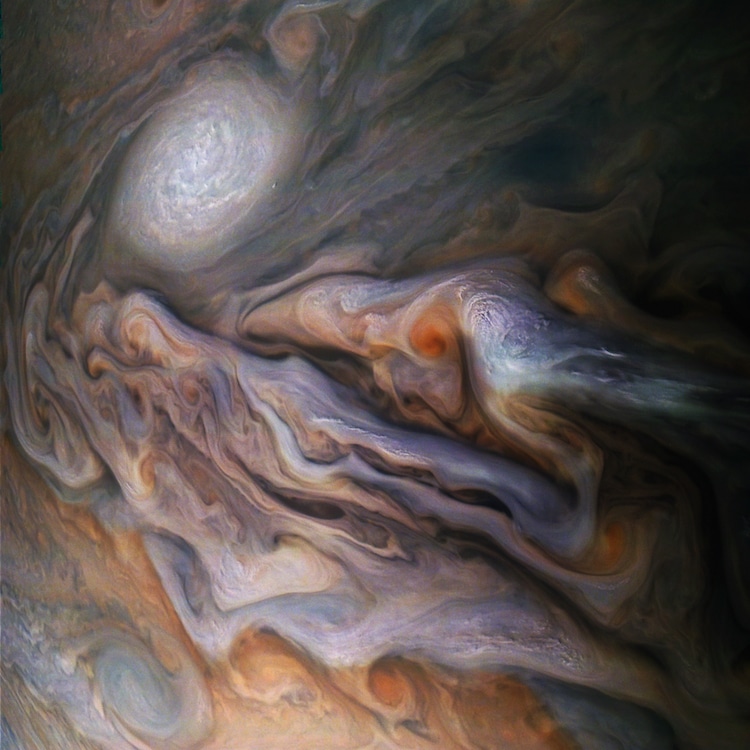 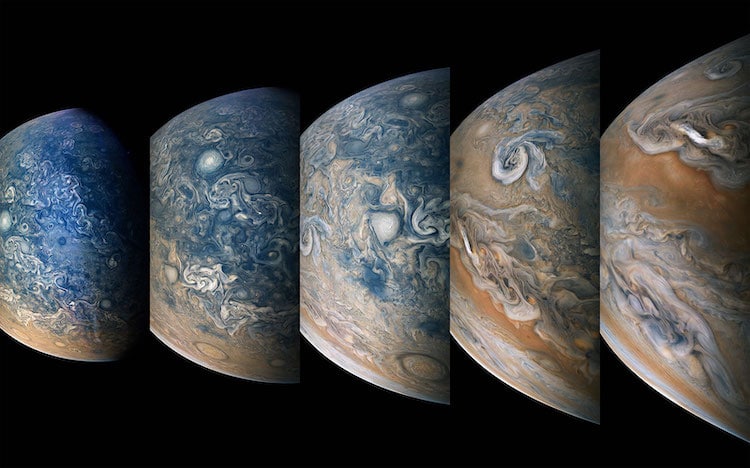 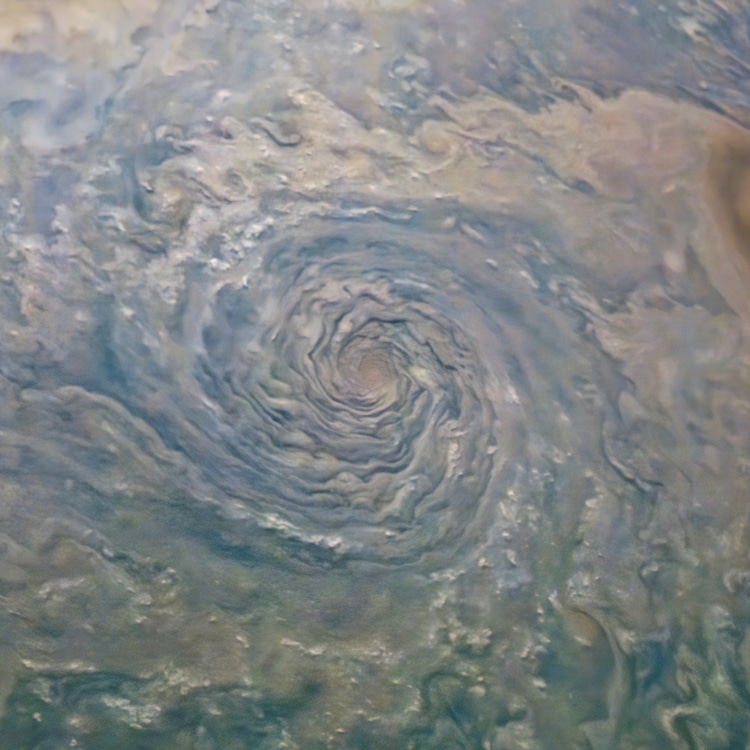 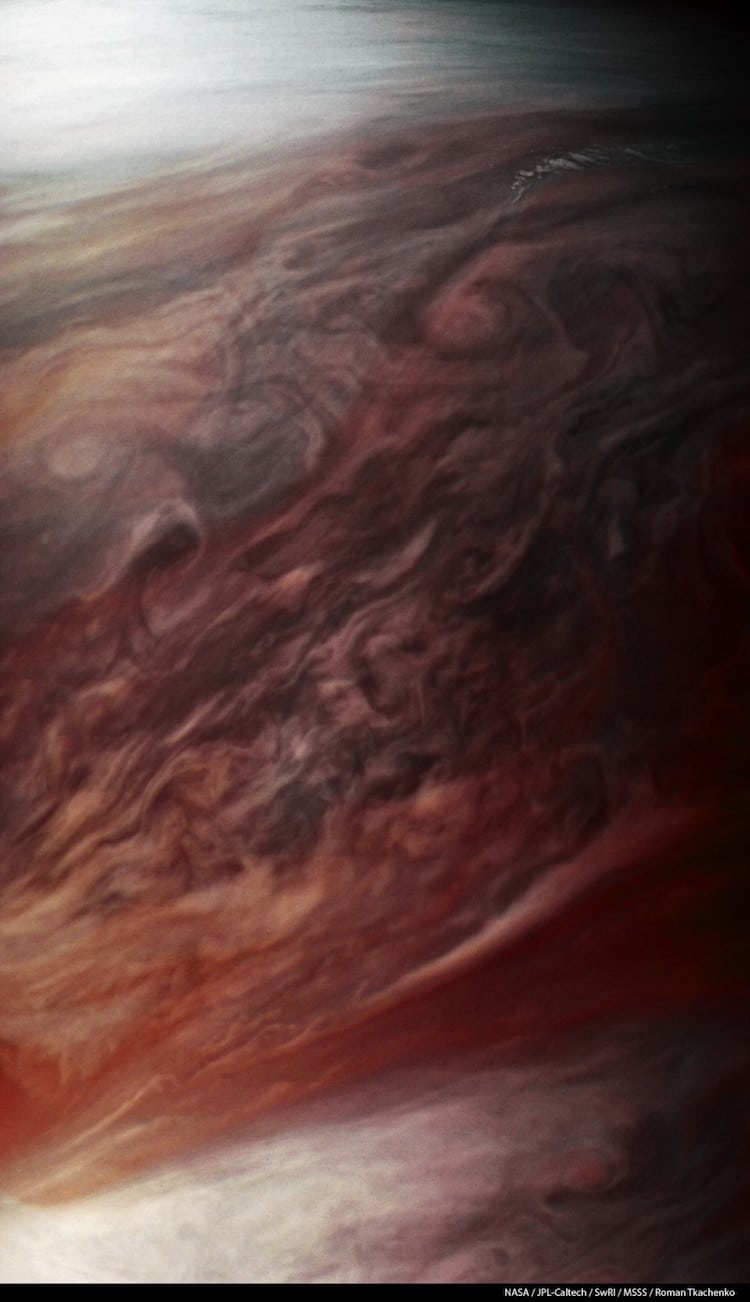 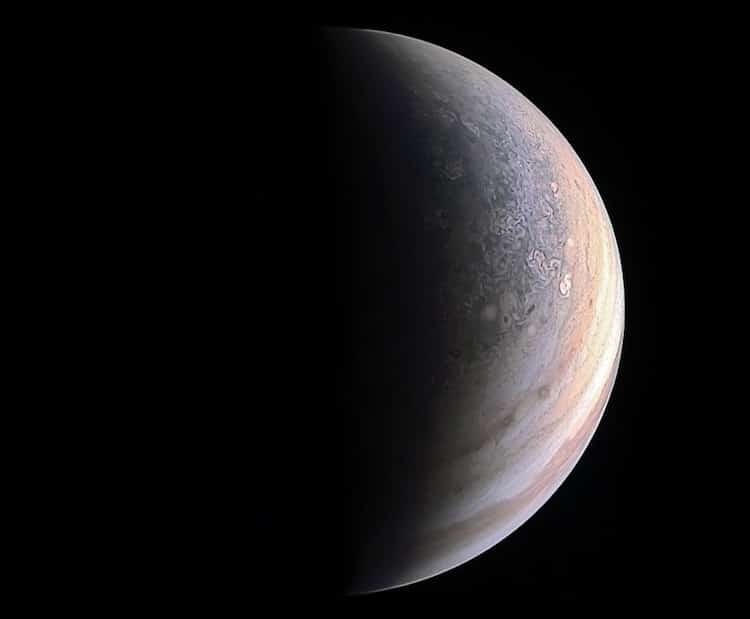 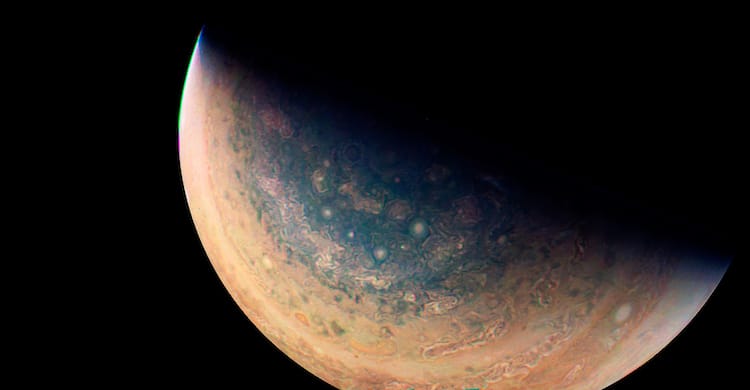 Learn more about what Juno is teaching us about Jupiter in this NASA lecture.

LEGO Astronauts Launch Off Towards Jupiter

After 13 Years, the Cassini Spacecraft Says Goodbye with a Final Photograph of Saturn