ISS Astronauts Adopt Adorable “Earthy” Toy as Their Next Recruit 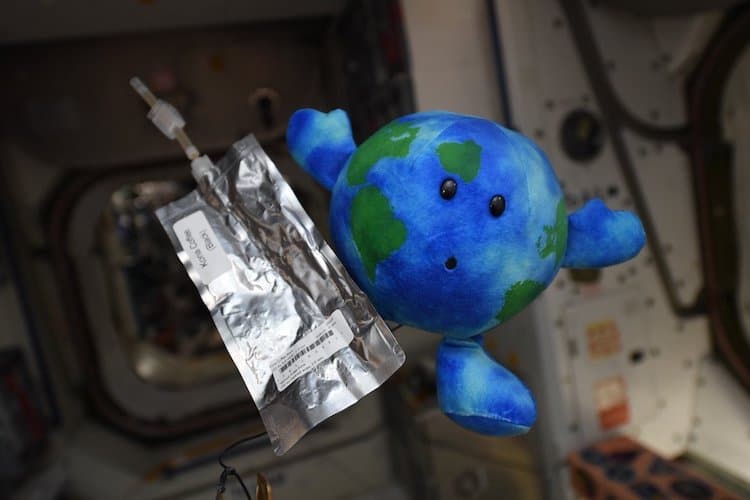 On March 2nd, 2019, SpaceX launched the Crew Dragon spaceship into orbit for the first time, with the objective to dock on the International Space Station before returning to Earth. While the seven-person spaceship has been designed to carry NASA astronauts, no humans boarded the commercial mission (called Demo 1). Instead, the roughly six-day-long, unmanned demonstration carried a crash-test dummy named Ripley (named after the female protagonist in Alien), 400 pounds of cargo, and an adorable plush toy planet Earth.

The crew members living aboard the International Space Station were pleased to meet “Earthy” (aka Little Earth) and immediately adopted him as one of the team. NASA astronaut Anne McClain, Canadian Space Agency astronaut David Saint-Jacques, and Roscosmos cosmonaut Oleg Kononenko have been posting updates on Twitter, revealing how the toy has been undergoing important training.

So far, Earthy has learned how to put on his emergency mask, undergone treadmill training, and even lent a plushie hand with plumbing work. However, being an astronaut trainee is exhausting, and even toys need their caffeine. McClain tweeted, “Earth's second day on @Space_Station started early, but he was happy to learn that even in space, the day starts off with coffee.”

Little Earth might be small, but he’s part of a hugely important historical moment. NASA administrator Jim Bridenstine even hailed the Demo 1 mission as “the dawn of a new era in American human spaceflight.” Now that Crew Dragon has successfully returned to Earth, SpaceX and NASA will analyze the collected data from the flight to prepare the space capsule for its first human passengers: NASA astronauts Bob Behnken and Doug Hurley. Behnken says, “I think Anne and David and Oleg have trained him [Earthy] up well. Hopefully he can walk us through the emergency brief and he's a full-fledged station crew member by the time that we get there.”

Since Earthy’s mission into space, the company that makes the toy, Celestial Buddies, has completely sold out. “We apologize for our current lack of Earths,” Jessie and Jon Silbert say on the company’s website. “We have never had one of our products launched into space before, and we were taken totally by surprise.” Celestial Buddies plan to have more Earths in stock sometime in April 2019.

On March 2nd, 2019, SpaceX launched the Crew Dragon spaceship into orbit for the first time with the mission to dock on the International Space Station.

.@AstroAnnimal welcomes humans aboard the first @SpaceX #CrewDragon to visit the station and introduces two special guests, Ripley and Little Earth, ushering in the era of @Commercial_Crew. #LaunchAmerica pic.twitter.com/QqzEEgDWzt

On board was an adorable plush toy planet earth that the ISS crew members adopted as part of the team.

They even started putting him through training.

Earth will learn a lot during his busy week on @Space_Station – today he kept me company while we checked our suit sizing to account for space growth (I am 2 inches taller than when I launched!), then we did some translation adaptation. pic.twitter.com/A89tJauyQu

Earth’s second day on @Space_Station started early, but he was happy to learn that even in space, the day starts off with coffee. Then it was emergency mask donning practice with @Astro_DavidS – if there’s an (unlikely) ammonia leak, we have just seconds to protect ourselves. pic.twitter.com/Mmtc6ii3B8

Busy 2nd day for Earth on @Space_Station – removing a constituent analyzer with @Astro_DavidS and some plumbing work with me. Preventative maintenance keeps us flying! He also learned how schedules keep us synced with the ground contol centers. What should he do tomorrow? pic.twitter.com/byJnnt8dYq

Earth’s 3rd day started with getting the blood (plasma?) pumping! First the treadmill, then weights – he even got some deadlifts in with me. It is important to exercise every day, not just for our muscles but also to protect our bones from losing density in microgravity. pic.twitter.com/gIsiKt4K8S

(1/2) Earth’s 3rd day was busy! Briefings on how we manage trash and how to work the controls for @csa_asc Canadarm2 (no, you cannot take it for a spin!), then a lesson on Soyuz descent with @Astro_DavidS (our lifeboat to get home in an evacuation, have to keep skills sharp)… pic.twitter.com/2n1hEZzj8J

(2/2)…then a favorite of the crew, group dinner! The candlelight dinner was also attended by Paxi, who is from @esa pic.twitter.com/lAin0TdfdO