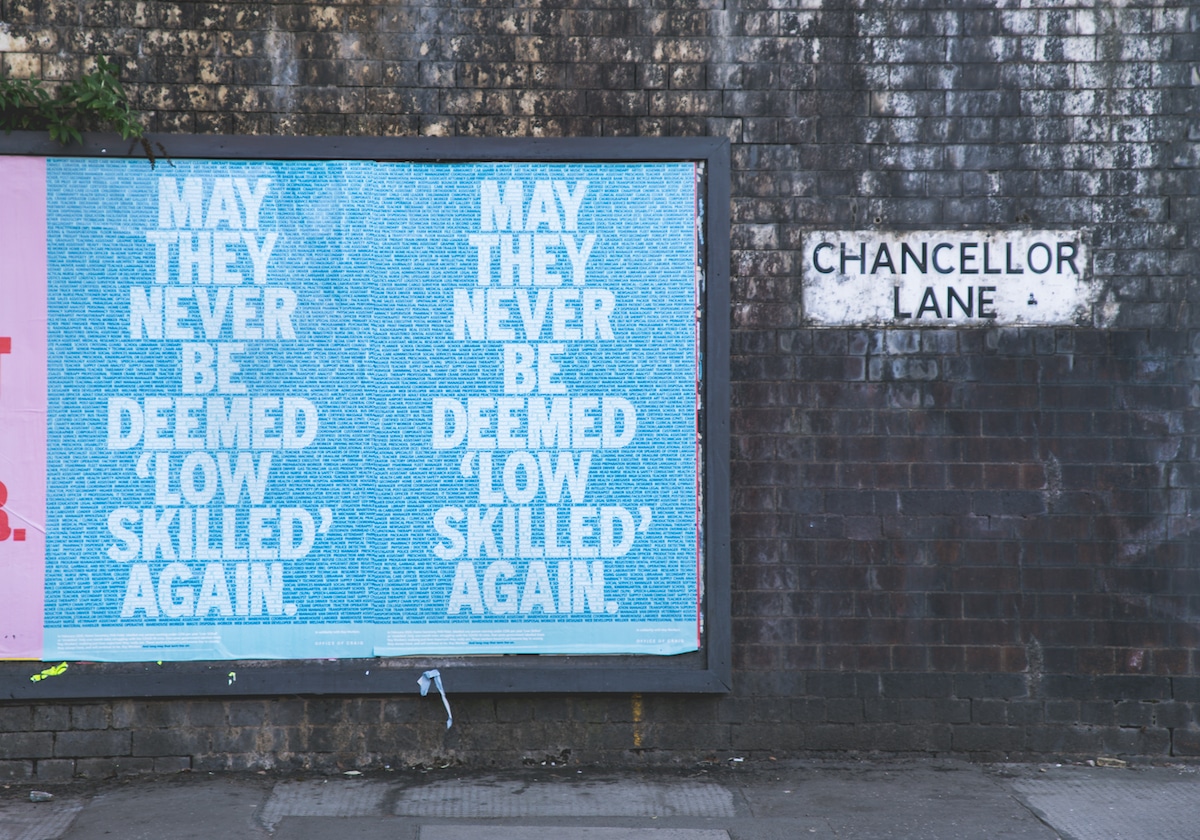 Does a person's value to society really equate to how much they earn? Most people would say no, but that's exactly what UK home secretary Priti Patel implied in February when discussing how EU work visas would function post-Brexit. Suddenly, workers earning less than £25,000 per year—about $31,000—found themselves being labeled as “low skilled.” If this sweeping generalization seems quite unfair to you, you're not alone—graphic Craig Oldham thinks so, too. So, he decided to do something about it.

After researching what sort of jobs qualify as “low skilled” according to the UK government's standards, Oldham incorporated those professions into a poster campaign that was launched in Manchester and Liverpool. Using the slogan “May They Never Be Deemed ‘Low Skilled' Again,” Oldham peppered the background of the poster with these jobs. Some of the professions that made the list may surprise you, as they include work that certainly requires skill. Registered nurses, veterinary assistants, train drivers, web developers, and crane operators are just some of the many jobs that made the list.

By using his graphic design skills, Oldham wanted to draw attention to the hypocrisy of these new policies, particularly at a time when many of these professions are considered “key workers” during the COVID-19 crisis. The same people we can't live without are also the ones being deemed unskilled.

We spoke with Oldham about the project and how it came together, as well as how he feels that design can have an impact in raising awareness. Read on for My Modern Met's exclusive interview. 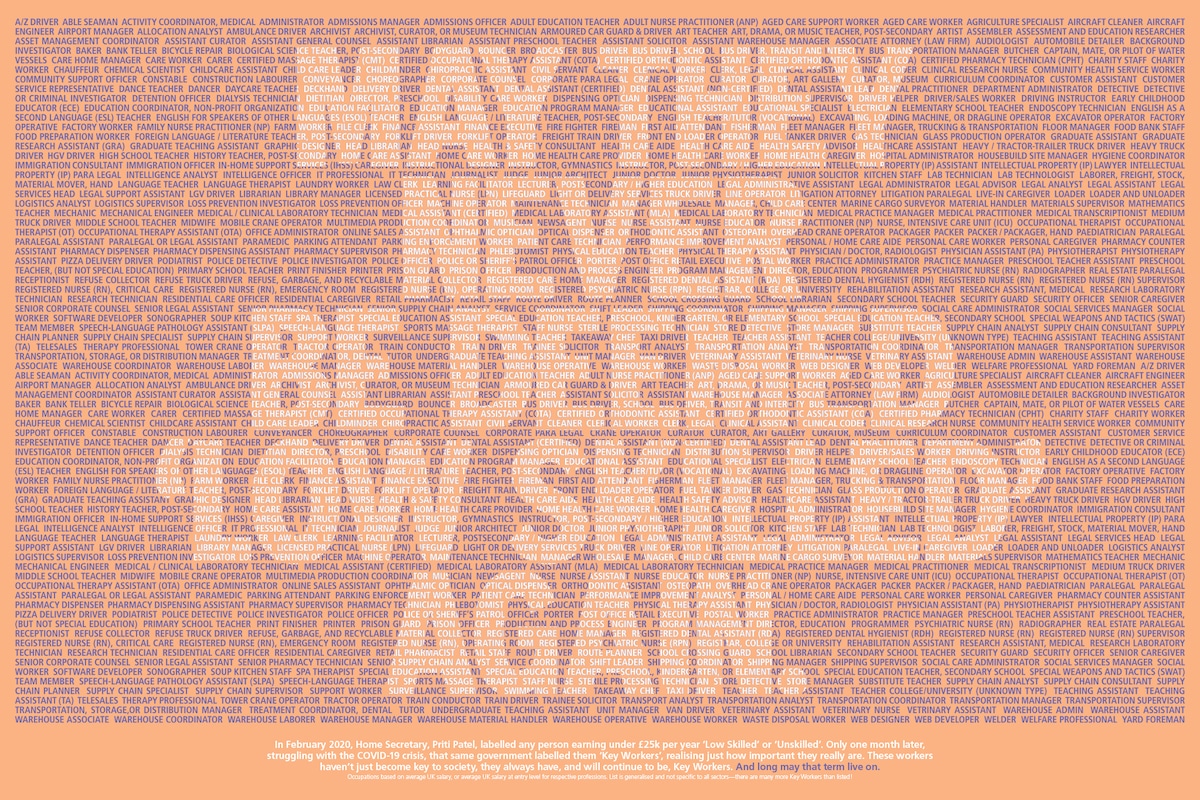 How did this project come together?

The project assembled quite organically, to be honest. I’m quite politically and socially active as a designer, and feel we have a responsibility in holding authorities to account and to act responsibly. In February this year, before the pandemic fully took hold here in the UK (or rather, before the Government decided to act upon it), the Home Secretary, Priti Patel, had made comments on the government’s immigration policy on what determines a person’s “value” and I was outraged by them.

Patel labeled any person earning under £25,000 [about $31,000] per year “Low Skilled” or “Unskilled.” Only one month later, struggling with the COVID-19 crisis, that same government suddenly started calling the same workers “Key Workers,” realizing just how important they really are. It felt to me this hypocrisy was a weird form of, well, snobbery. These workers clean, care, and deliver for this country, and they always have—global pandemic or not—so to suddenly switch just because they are now propping us all up as a nation and you’ve realized how important they are made me a little angry really. These workers haven’t just become key to society, they always have been, and will continue to be, Key Workers.

I was then, by complete chance, asked around the same time if I’d like to contribute an artwork by Jack Arts, a media agency, to be put up around the country to share goodwill and positivity. And by Liverpool-based creative agency Dorothy asked if I had a piece to contribute to their online exhibition Isolation Nation. Hearing Patel’s words ringing in my ears at that juncture, I decided to make the poster and share it nationwide with Jack Arts, and made available to download through Dorothy. 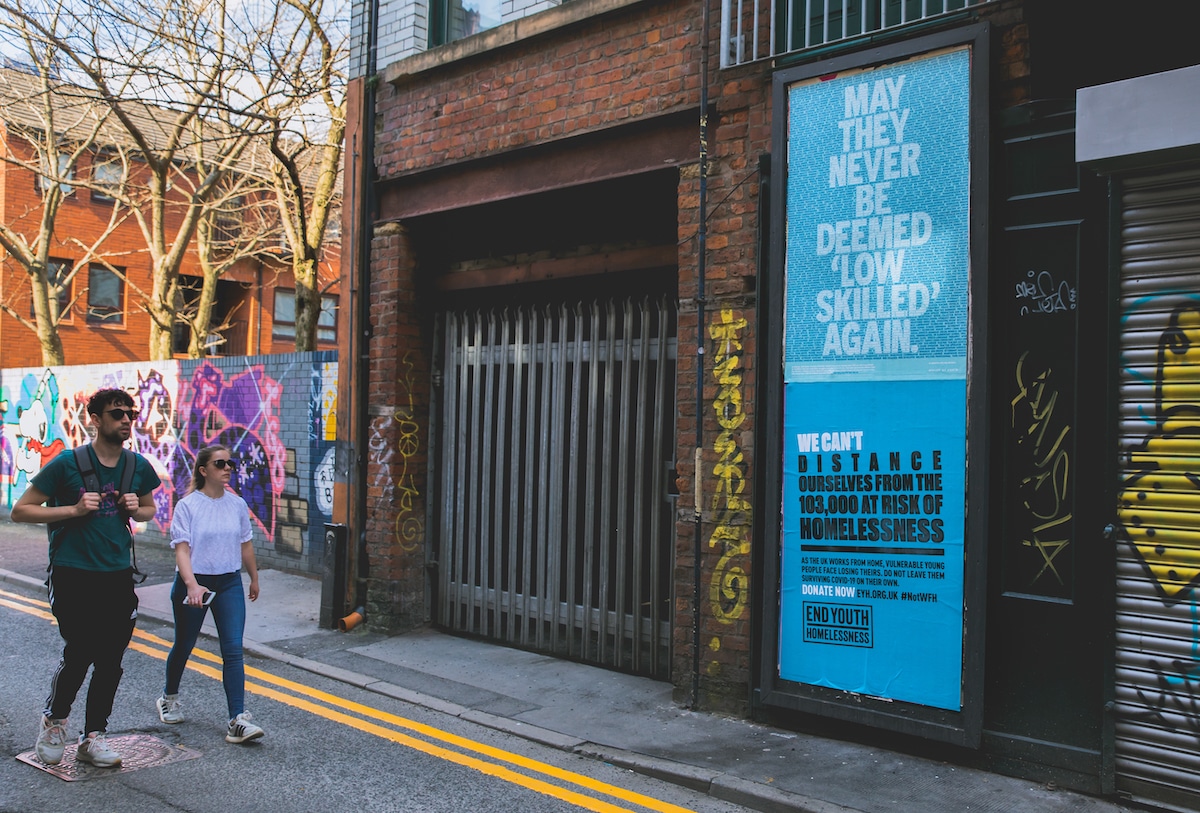 Why did you feel it was important to get involved?

To be honest, I hadn’t thought about creating anything. I feel there is a time and a place for design, and I have always believed that graphic design is a means and not an end—that it has a part to play, but it’s not necessarily the primary, or a driving factor in things like this. But I do care a lot about people, and this is an idea about people really. And about respect for everyone regardless of their occupation because we are all interconnected and equal—and equally important. Rather than a rightly positive message about staying home, or being kind to each other, all of which are great messages, I felt it still important to stick up for those countless unknown workers who don’t have the relative luxury of being at home safe with family. They are really important people.

What sort of impact do you think the immigration policy will have on everyday life in the UK?

I think globally, immigration is a volatile policy point. But for me personally, I believe in it because I believe in creativity. I don’t feel that one can champion an idea that creativity is a diverse and rich thing, where the more exposure and experience to different, conflicting, contrasting, and various resources and inputs makes for richer and better ideas, to then only draw from one pool.

The best company in our country, and my bias urges me to say the world, the National Health Service (NHS) is made up (according to the House of Commons’ Library) of 200 different non-British nationalities alongside those born in the UK. These people, from many many nations, save and change lives every day. For me, immigration is a good thing and the current government’s policy doesn’t cater to that. It seems to only pander to a noisy right-leaning group of people that believe in a nostalgic idea of the make-up of Great Britain and Northern Ireland. 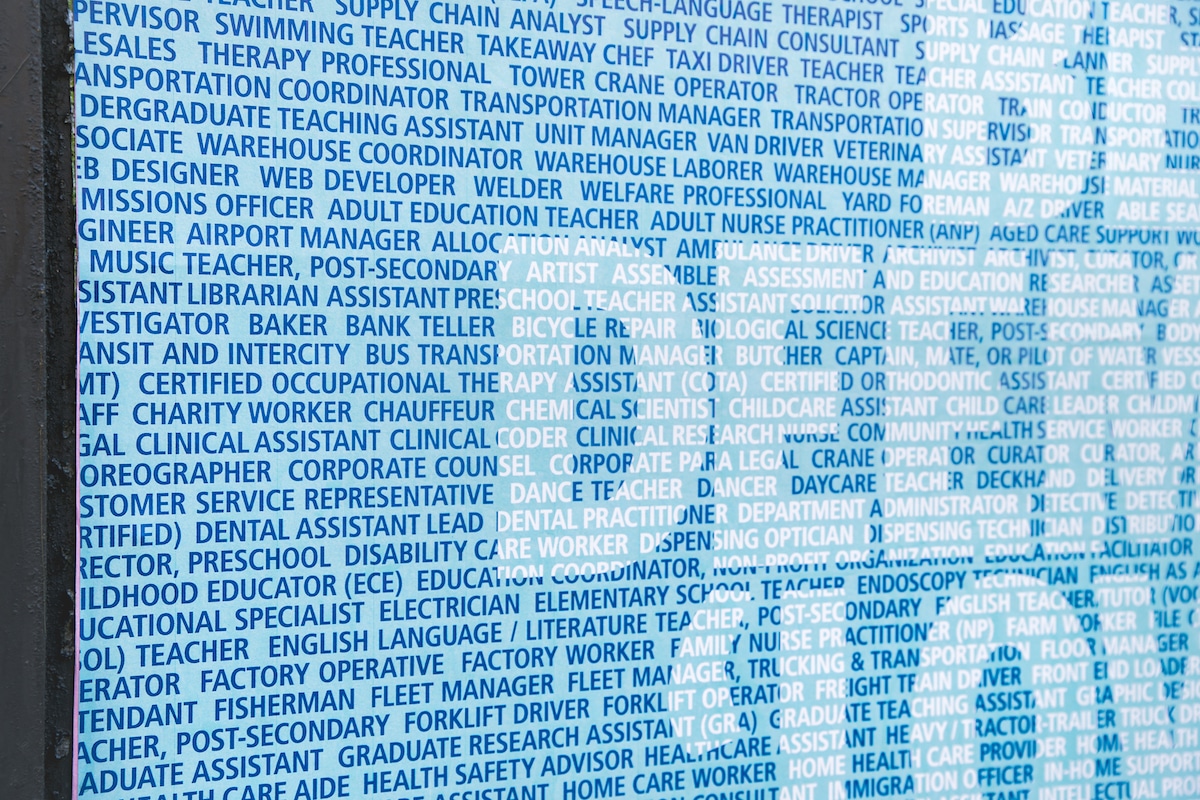 How did you go about selecting the jobs listed on the posters?

The headline came fairly quickly, but naturally didn’t work without a context, and that’s when the list of occupations came. Getting the list was an issue, as the Government refuses to publish a list or classification of those they call Key Workers—either it’s too complex to do so, or they are passing responsibility over to others, make your own call on that. I had to trawl the government website, look into employment sites, approach trade unions, and I even created an open document online to crowdsource occupations from the key workers themselves. But the list is by no means comprehensive.

The occupations listed are based on average UK salary, or average UK salary at entry level for respective professions, which are £25,000 or less per annum—as per government policy. It also contains key workers above that threshold that are still working, though not many (hence their inclusion). It’s also generalized and not specific to all sectors—there are so, so many more “Key Workers” than listed, not only those earning beyond the threshold. But it’s supposed to be a show of solidarity with all of those people continuing to work despite the crisis, supporting, caring, cleaning, and delivering for every single one of us. 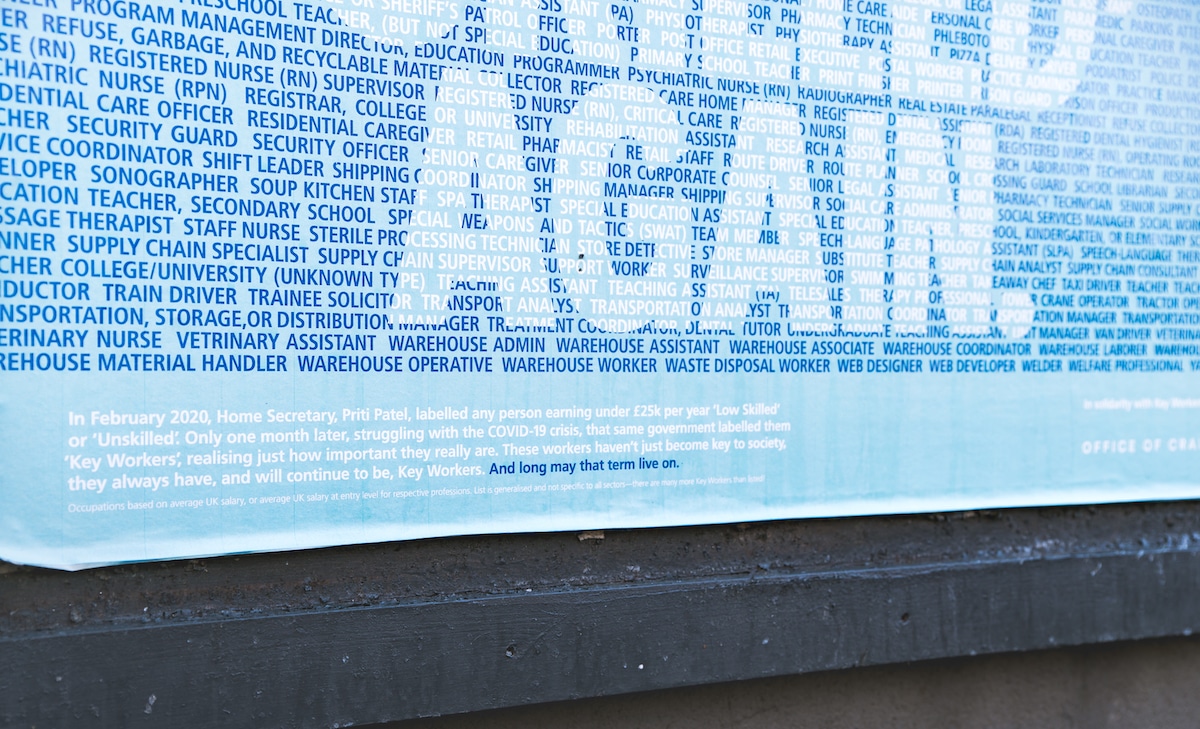 Were there any that surprised you?

Many actually. I think again, this is about people and the vast inequality in our country. £25,000 or less covers a vast amount of people—many of them vital. Again, I refer to those workers in the NHS who are woefully underpaid. According to Patel and the government, phlebotomists, radiologists, occupational therapists, and many nurse grades are low-skilled. So, a worker who takes blood samples to help diagnose people or manages technical equipment to aid x-rays, scans, many crucial to detecting cancer, or someone to help a person through a life-altering trauma or mental health issue, or just simply care for those in need, are being demeaned and devalued by their government. They are essential, crucial, key workers and people.

What do you hope that the public reaction to the work is?

So far it has been overwhelmingly positive. Some have interrogated the list and asked either why some are not included (which is something I have to navigate, but I cannot fit every occupation on there as it’s so difficult space-wise) but I am trying to rectify this in future editions and also making the list in another capacity. Some have interrogated the list and question why I’m calling certain occupations low-skilled, but of course, this is a minor misunderstanding. On the whole, it has been positive, really positive. And seeing it up in windows of homes and in hospitals and workplaces makes all the difference. 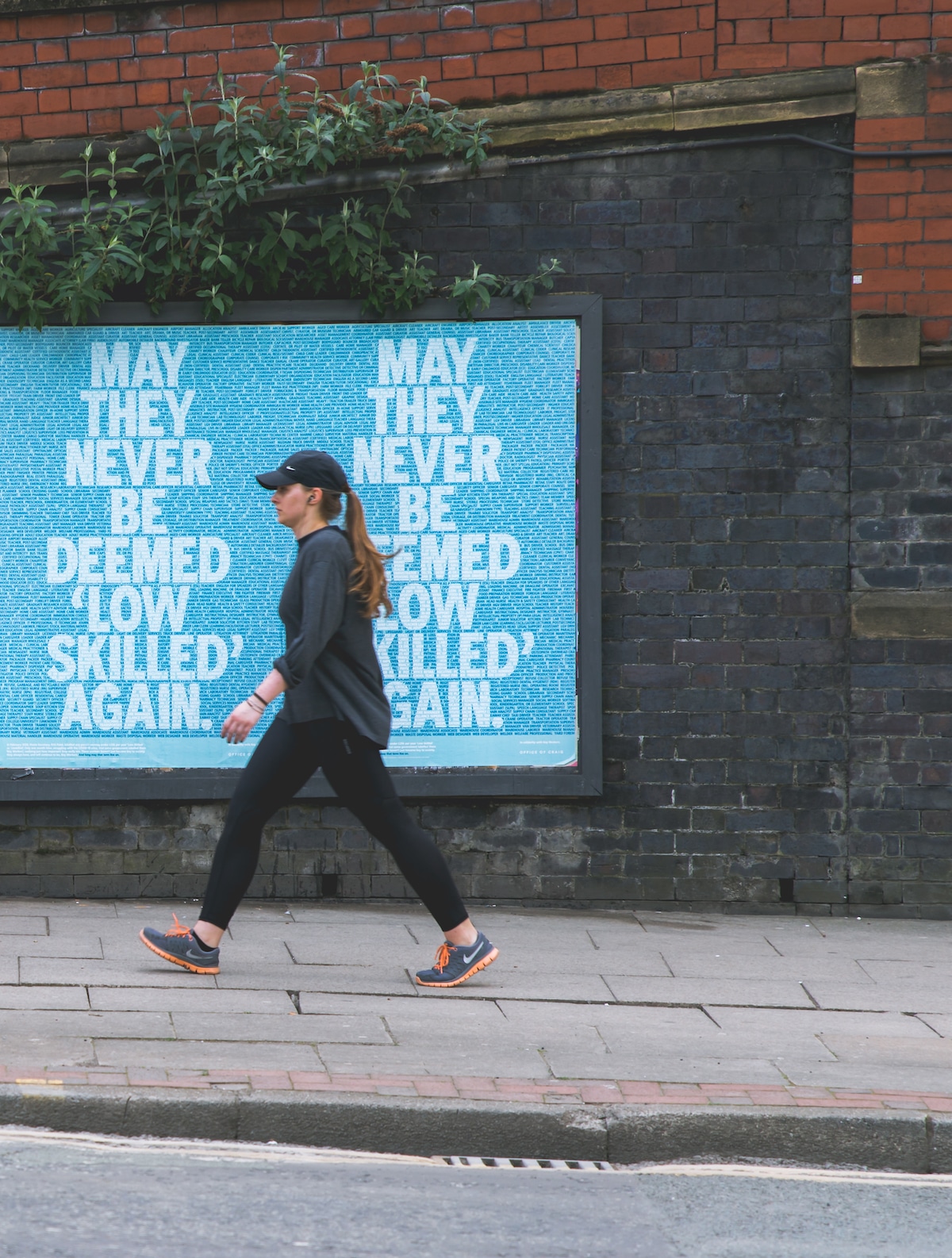 Why do you think it's important for designers like yourself to lend their work to campaigns like this?

Because we have a responsibility to our society. Designers, particularly Graphic Designers, can often lament and be frustrated at what they perceive as a lack of awareness or appreciation for what design is and can do. Well, for me, the answer to that is to prove it, and to engage your talents and time in causes and concerns which can make a meaningful impact on society and the world beyond what we have to do commercially to earn a living.

It’s a variation of that classic adage of “they won’t come looking for you…” so if you want to use the power of design, then use it for good. I also believe that beyond design, beyond any occupation any of us do, we are first people belonging to a society and we have a duty of care to each other to make sure that society is fair and just, so we should be involved in campaigns and causes in which we believe could achieve this—design or not.

Graphic Designer Reimagines Iconic Logos in the Age of Coronavirus

What do you think of the campaign? Share
Like My Modern Met on Facebook
Get Our Weekly Newsletter
Become a
My Modern Met Member
As a member, you'll join us in our effort to support the arts.
Become a Member
Explore member benefits