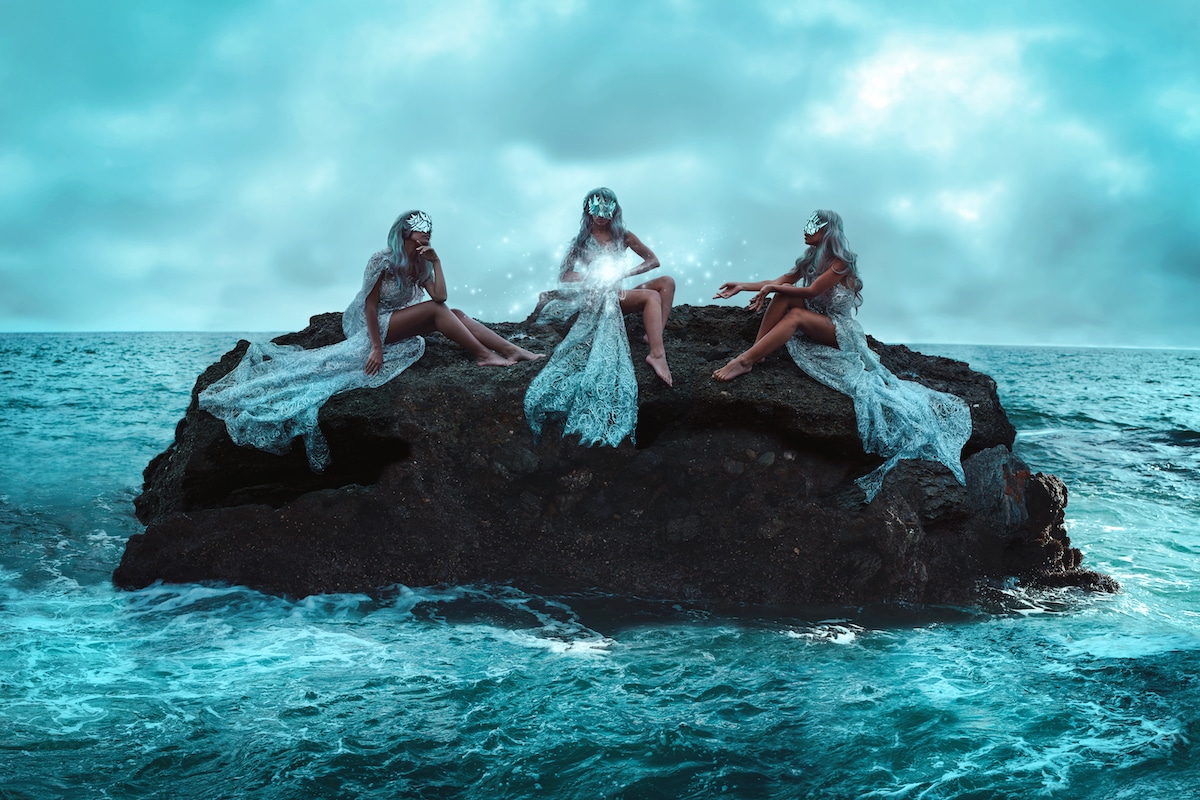 Photographer Kindra Nikole is used to exploring fantastical subject matter in her work. From dreamy women who inhabit the forest to a gender-bending retelling of King Arthur’s round table, Nikole combines these enchanting subjects with breathtaking landscapes and costumes made especially for the shoots. Her latest series delves deeper into fairytale photographs but offers an intriguing twist. Called The Liminal, the images are of a place that’s in between our world and the next—a place where the possibilities are limitless.

Nikole crafts scenes that highlight how the divine and detrimental both exist in this unique land, as told through her characters. The way in which each figure responds to the liminal is different. “Some have manifested as natural parts of their surroundings,” Nikole explains, “while others stumbled upon regions suffused with magick, finding themselves slowly devoured by the land—becoming one with it.” The former is evident in a piece titled Return of the She-King, where the central figure seems at one with a landscape that's simultaneously in the clouds as well as grounded with an abundance of blooms. Nikole's subject seems at peace and is practically glowing. The same cannot be said, however, for the main character of Beneath the Shadow of the Great Tree. Perhaps this is an instance of one wandered too far into an unfamiliar place.

As viewers—and visitors—to the liminal, Nikole encourages us to look inside ourselves through her subjects. “These entities seem aloof and impassive to our presence yet they perceive all,” she says, “welcoming us warmly, beckoning us nearer with sly expressions, or warning us of our trespasses.” What will we discover about ourselves through these characters?

The Liminal series is now on view at the Haven Gallery in Northport, New York until July 21, 2019. We had the opportunity to speak with Nikole about the photographs, including all of the amazing locations she visited to shoot all of the photos. Scroll down to read our exclusive interview. 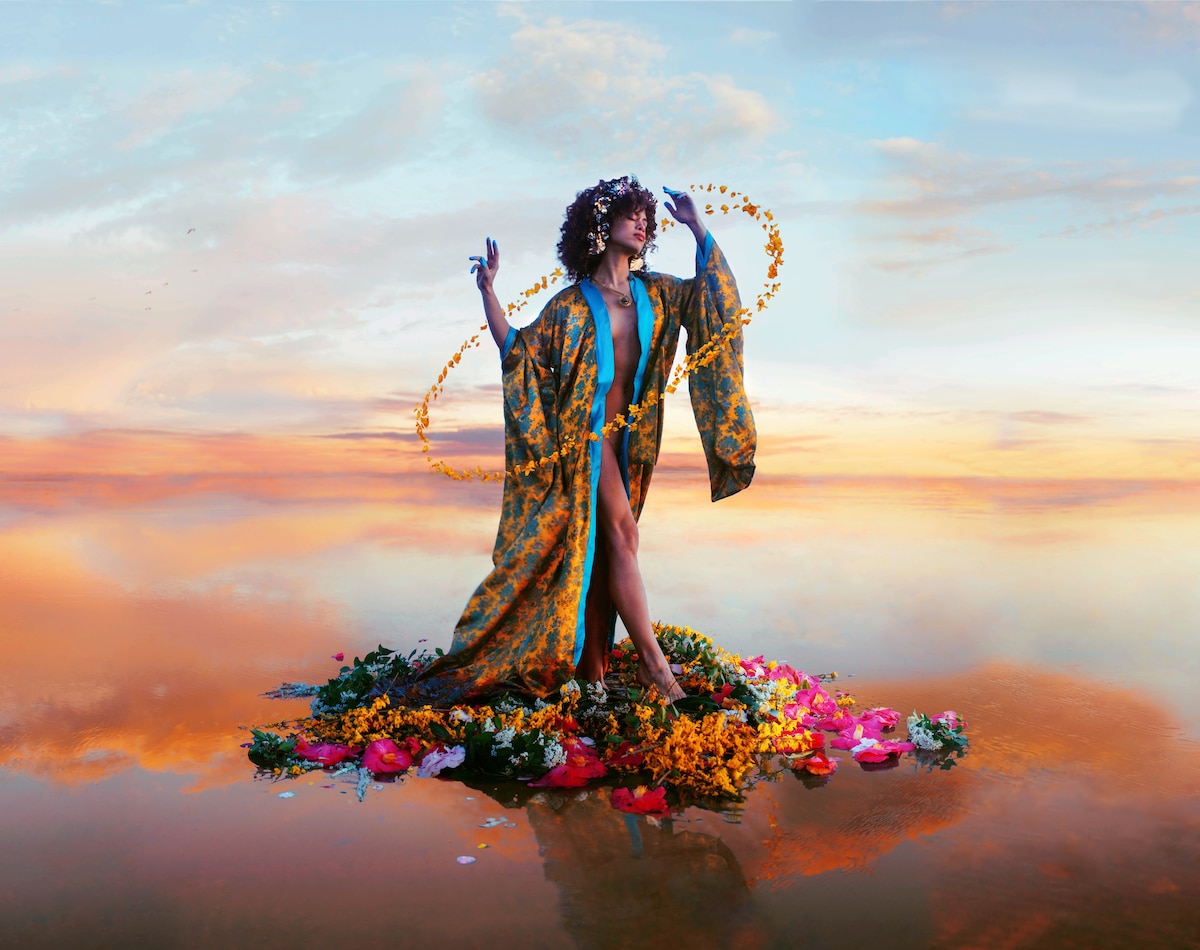 What was the inspiration for The Liminal?

It started out conceptually from the idea of creating my own folkloric images inspired by the folklore I’d read from around the world. But as I began working in earnest on conceptualizing the show, it leaned away from that and into something else entirely. I love the idea of a world that exists in between ours and others—an in-between place where the unimaginable is possible.

How do you plan for these images?

The planning for each image varies pretty wildly. Some I planned out months in advance—booking flights to locations, setting up scheduling with models, sourcing my wardrobe or creating it myself. The planning stage is usually fairly involved, and the shoots themselves take anywhere between one to three hours. Sometimes I land the shot very early on, and sometimes it takes a while for me or the model to warm up to the camera and get in the zone. I like to provide a setting and tone for the model and tell them what their character is like, why their character is here, and what their character is doing in the story. 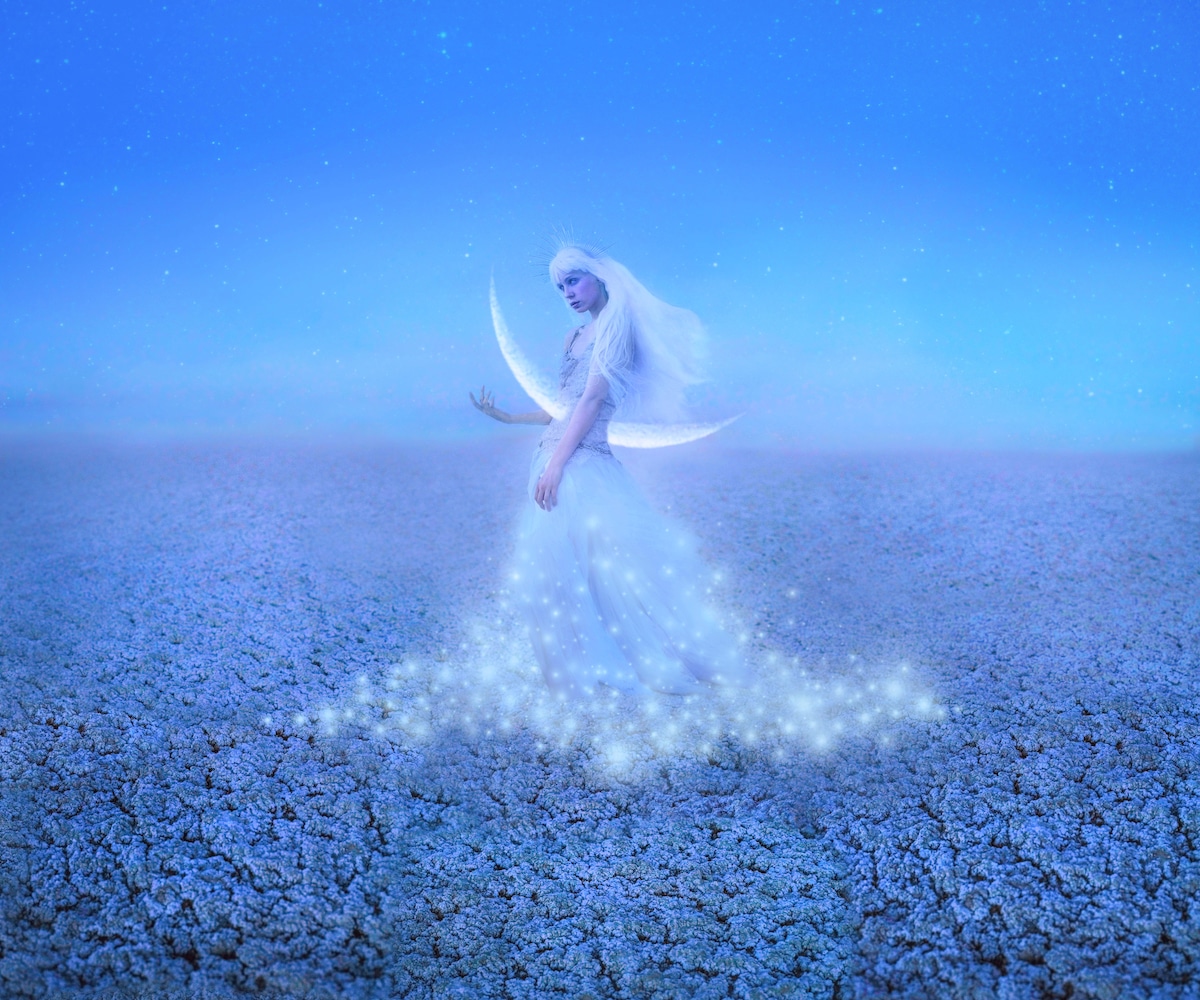 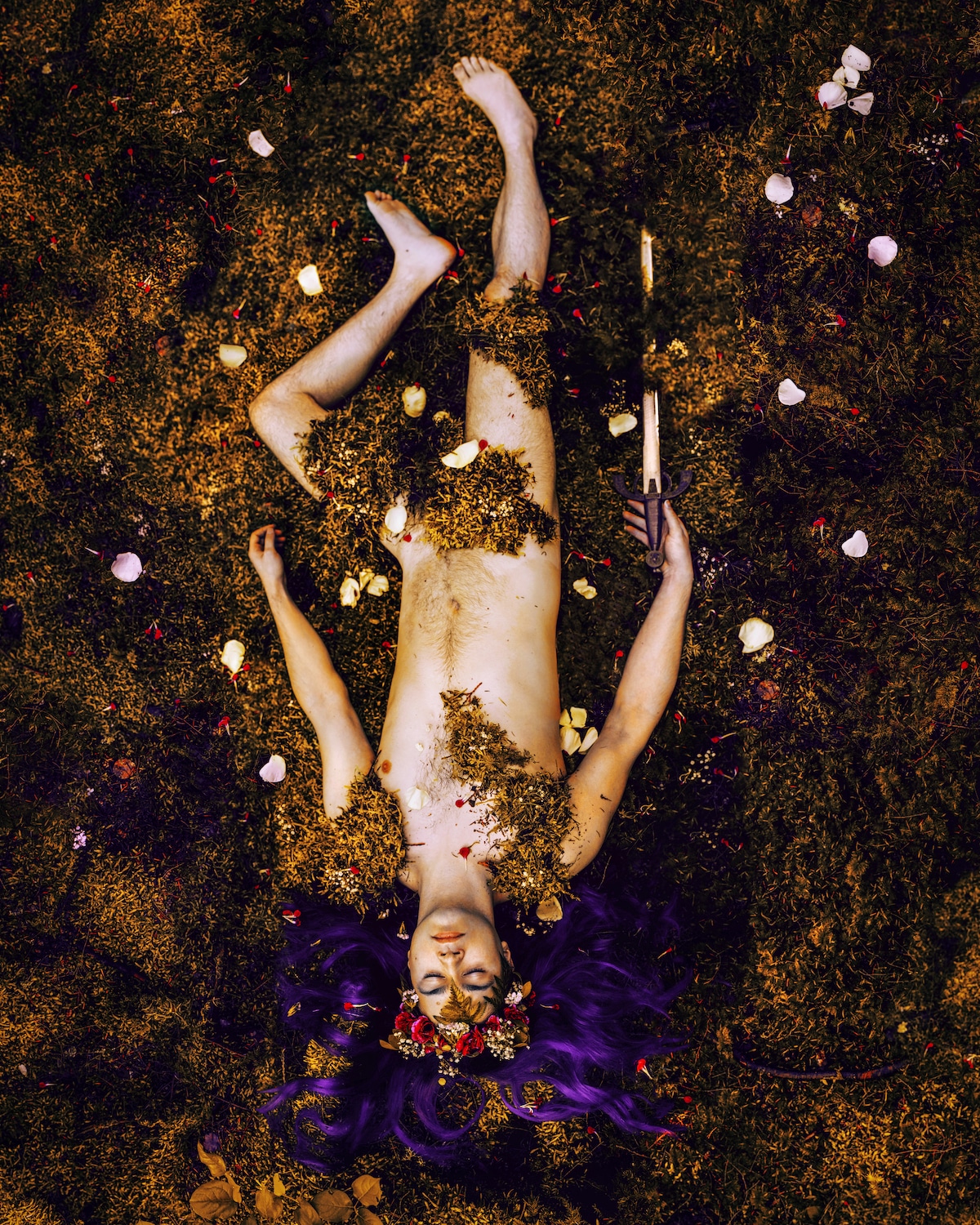 Beneath the Shadow of the Great Tree

Where were your shooting locations?

For this series, I really wanted to feature very different landscapes and moods. I wanted each character to have its own unique story. So a big part of the process involved driving or even flying to some locations to make that happen. I shot in Hawaii, California, and the Pacific Northwest to capture all the varied environments in the images. Hawaii for lava beds, California for ocean and salt flats, and the Pacific Northwest for every other environment! 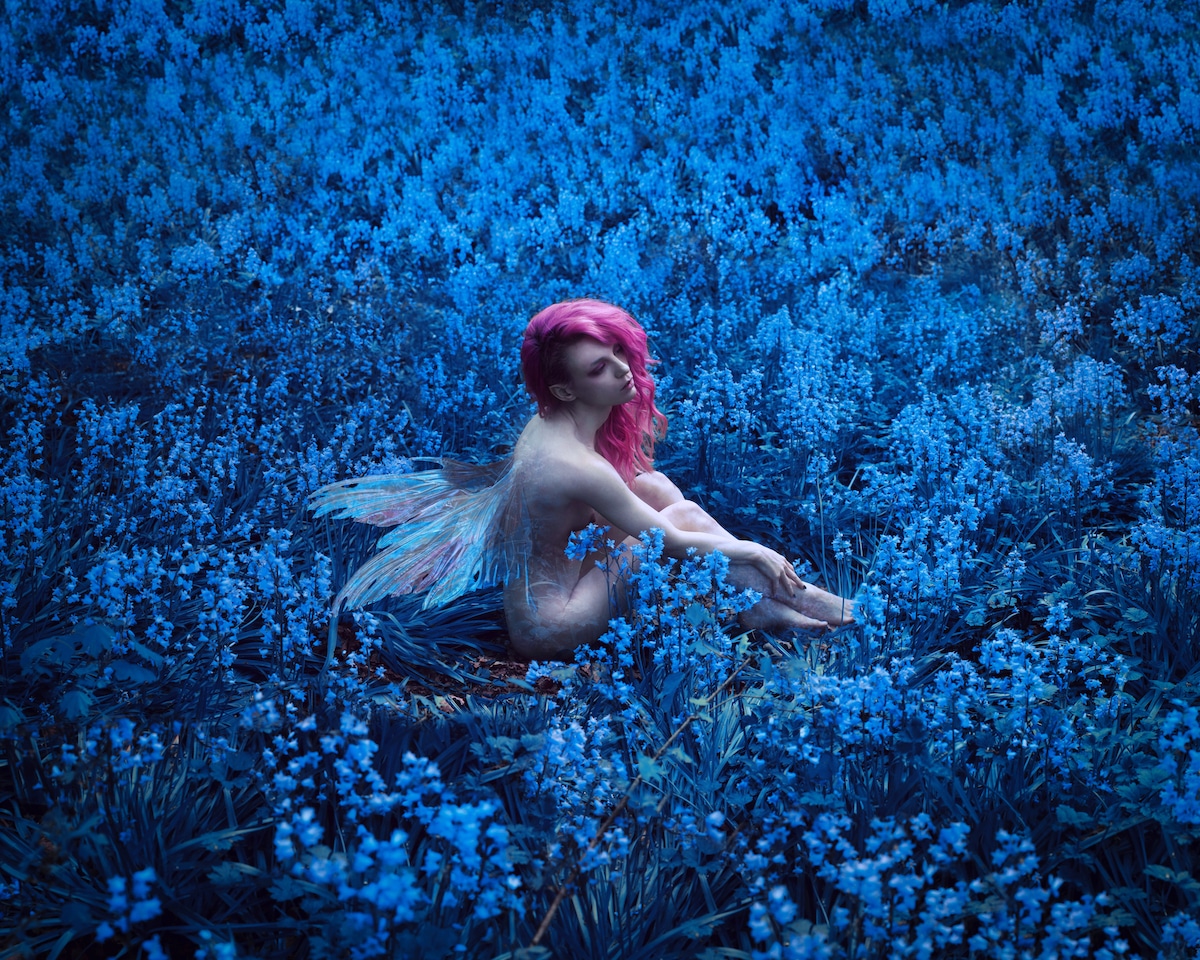 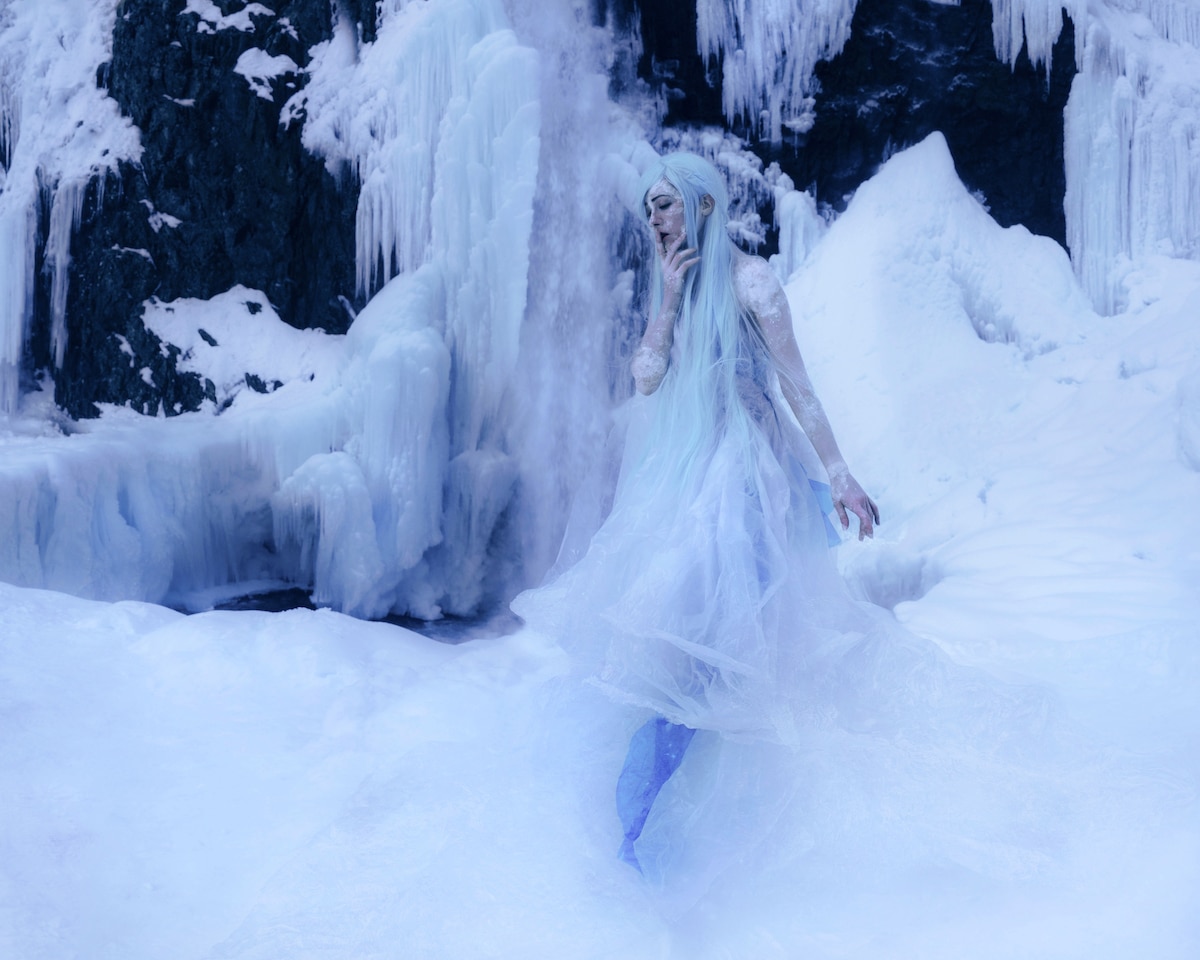 The Convergence of Celestite

You've mentioned before that you make things for your shoot, like your own costumes. Was that the case this time?

Regarding making my own costumes, it was the case for some, yes! The Convergence of Celestite features a handmade ice dress I created by repurposing plastic and lining it with fairy lights for a glowy effect. In my self-portrait, Eviscerate, I’m wearing a handmade gown by designer JoEllen Elam of Firefly Path. Wyrd features a dress made the day before the shoot with the help of my friend Cassie Soares. But the most personally important wardrobe piece from this series is the gold kimono-style robe worn by the model in Return of the She-King. This robe was made with the help of my friend Alli Chinn-Tupper. The fabric belonged to my mother, and it holds great sentimental value to me. I’ve been holding on to it for about six years now, waiting for the right project to use it for. I had the vision about four years ago of a woman gliding across mirror-like water, flowers at her feet, a golden robe billowing around her as she stepped forward, and I knew that it was time to use this special fabric to help me bring that vision into reality. The image is inspired by and named after a song by Dead Can Dance, and that song is what evoked the imagery for me. 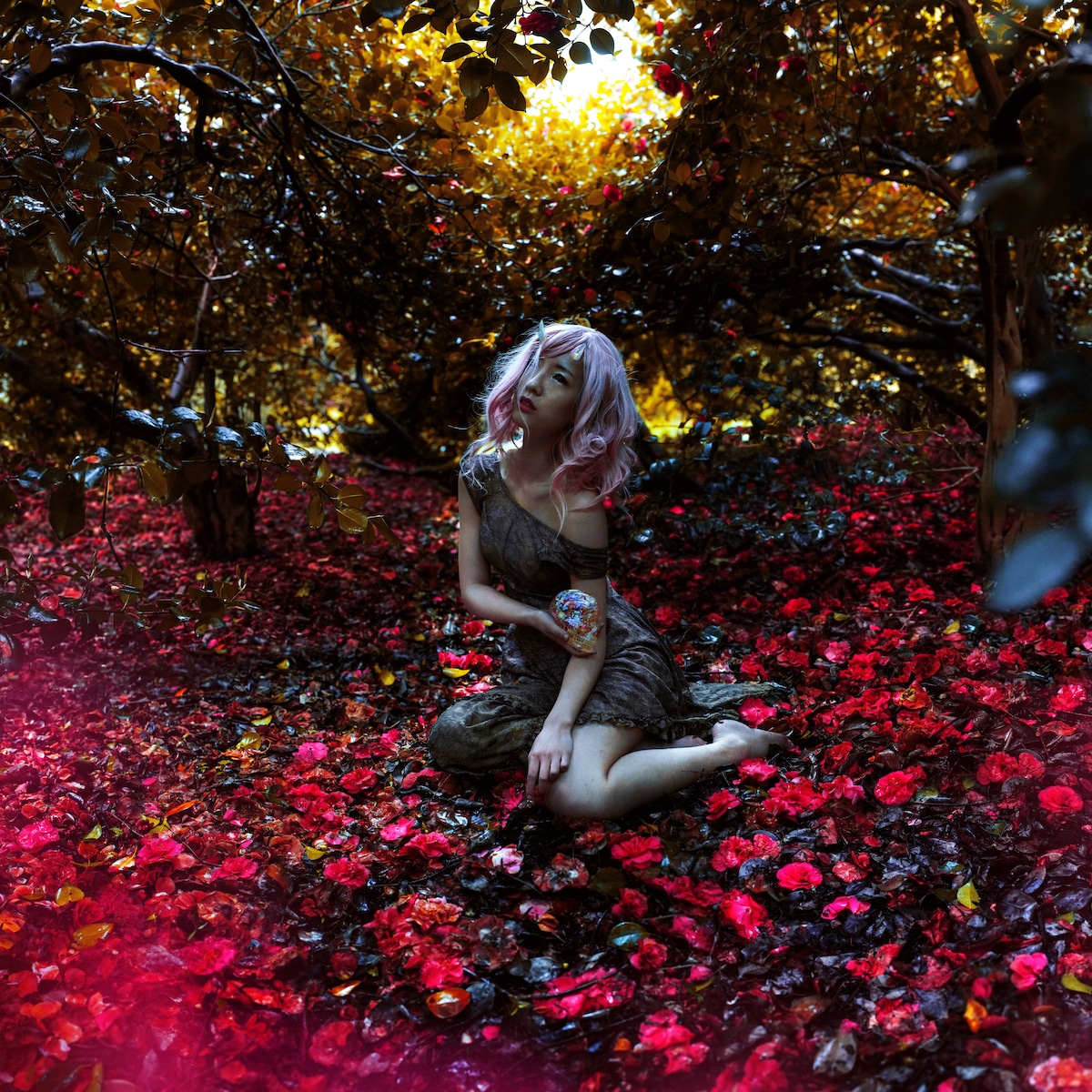 The Liminal appears to feature more post-processing (to get those great digital effects) than your previous series. What inspired this shift?

Like any artist, I’ve been feeling like I’ve been hitting a bit of a creative wall the past couple of years, and I felt the pull to seek out new challenges. I knew that these challenges would help breathe new life into my work and push me, sometimes forcefully, into growth. Which is ultimately always what I want—to grow. So for this body of work, I committed to pushing my own boundaries of what I thought I could create and flexing my post-processing muscles more than ever. Not only did it allow me to be even more creative, but I do feel like it helped me move past that proverbial wall.

It’s always important to me to shoot as much in camera as possible, which I did, right down to the flames blazing off of me in Eviscerate. I love practical effects and really nerd out over how they achieved effects in older films from the 70s and 80s. I love researching how moviemakers did things and then experimenting with those techniques in my work and blending them with post-processing. My goal is always to create images that feel unreal but look believable. 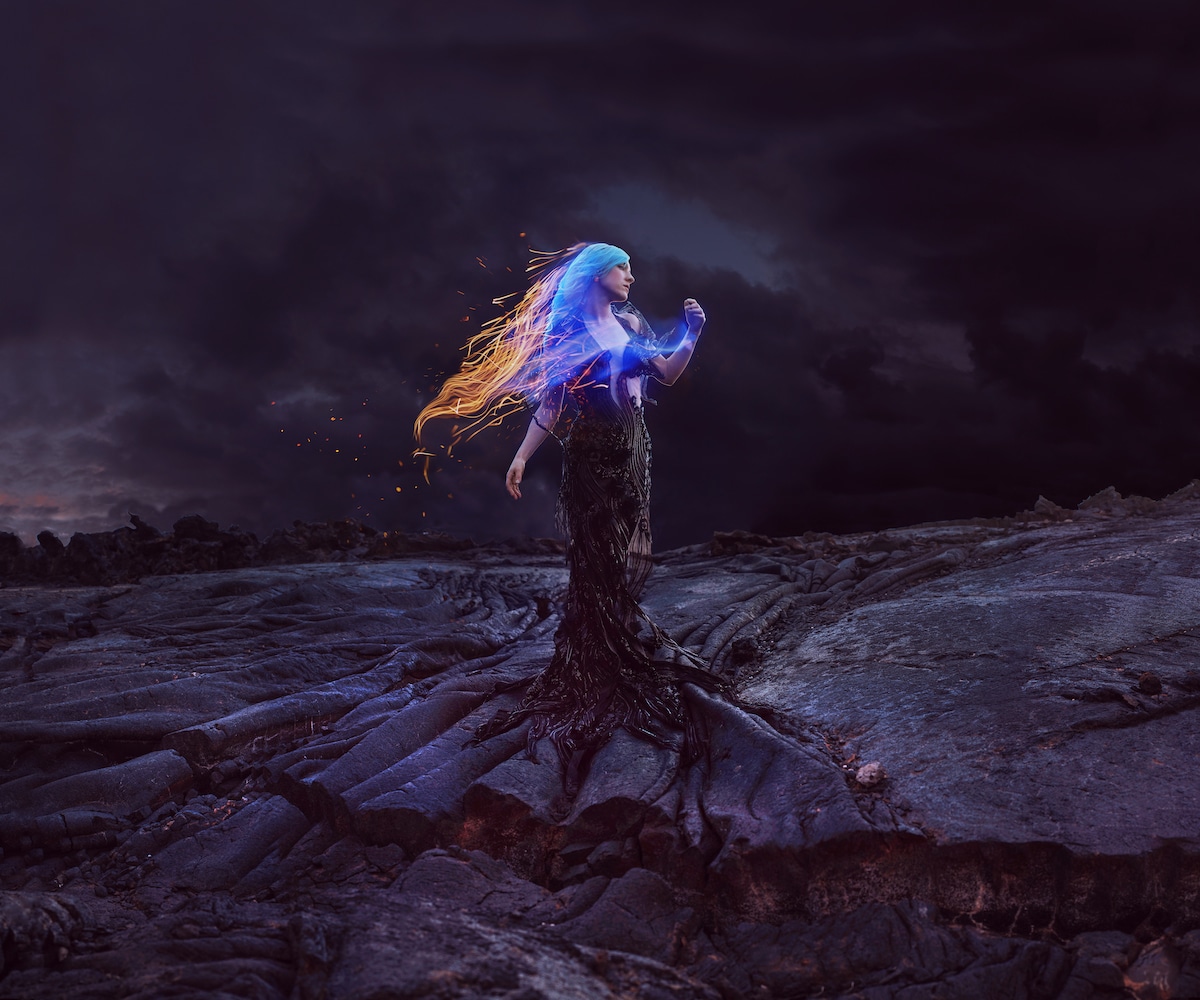 The Liminal seems to show a different moment frozen in time—like we're witness to just part of a story. Do you intend to ever continue these tales?

That was just what I was going for when I created this series! Originally I’d planned to write short stories to accompany each piece, so that’s still a consideration. For now, I’m excited to see how people will interpret each image. There’s something really rewarding about leaving the images somewhat open-ended—it’s an invitation to the viewer to participate and take part in the art.

Do they all exist in the same space?

Oh, absolutely they do. Each entity in the series has its own story to tell, but they all exist in the same universe—the universe of liminality. Sometimes we see things out of the corner of our eyes or notice a flicker of light on the horizon. I like to think that what we often brush off as “nothing” might instead be creatures that exist in another dimension. It makes the world that much more interesting and lends itself to my work. 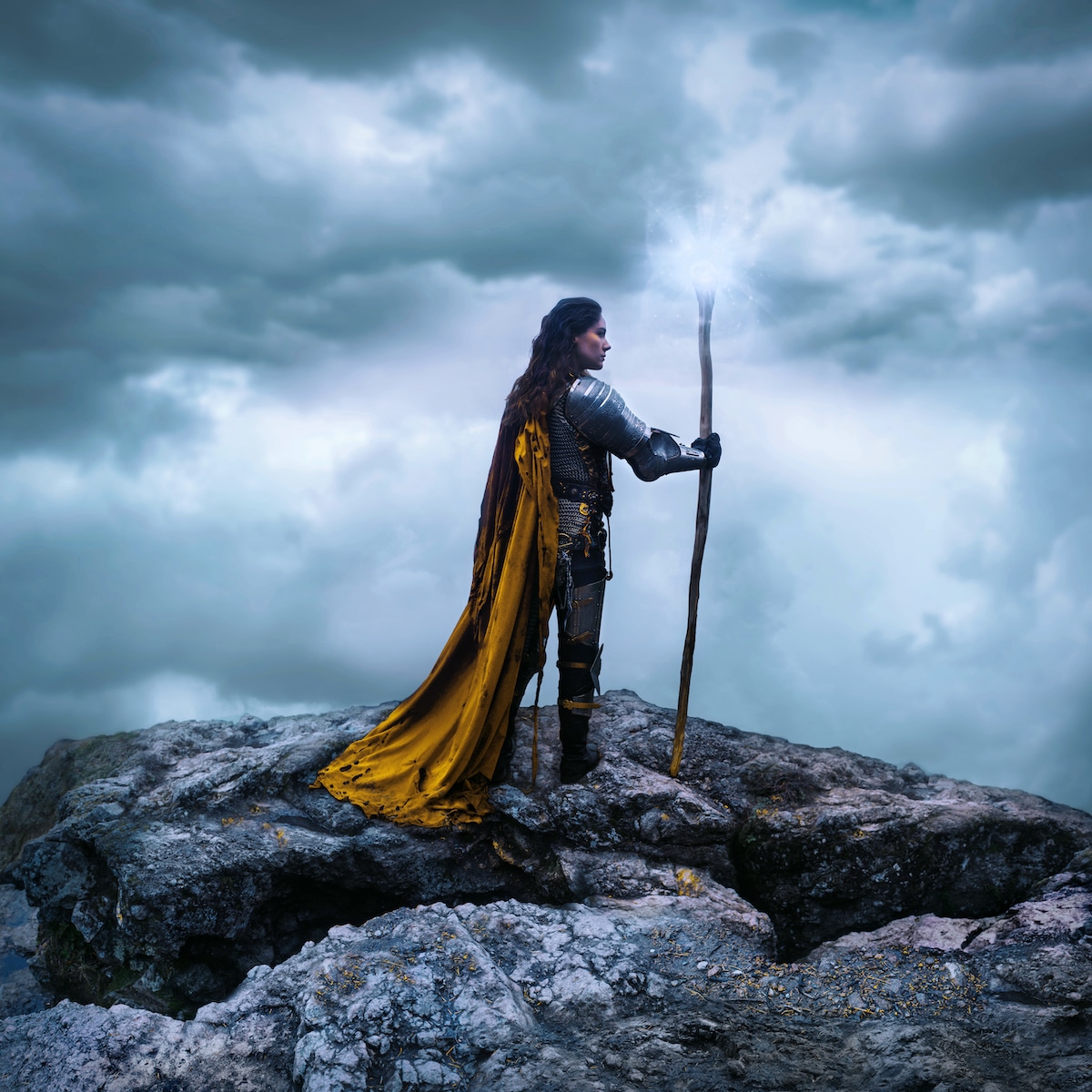 After taking a long hiatus from photography, you returned to it with the help of a 365 photo project. What was it like to participate in this daily endeavor?

I really had only dabbled a bit as a teenager, so when I began my 365 project, I had no idea it would eventually evolve into what it is now. Which is to say, vital to my existence. Taking on a 365 project, which is a photo a day every day for a year, was…huge, to say the least. I knew it was a massive commitment, and I don’t take commitments lightly. I spent two weeks deliberating on whether or not I’d do it, and then I finally decided that yes, I needed structure and I wanted to explore this whole photography thing. Over the course of the project, my work evolved drastically. It started out with just photographing inanimate objects to eventually creating full-blown portraits in surreal settings. It felt incredible to push myself beyond what I knew possible and to hold myself accountable to me and me alone. Doing so really has a way of instilling a unique self-confidence that to this day still bolsters me even when I do hit those creative walls or come up against resistance, be it internal or external. 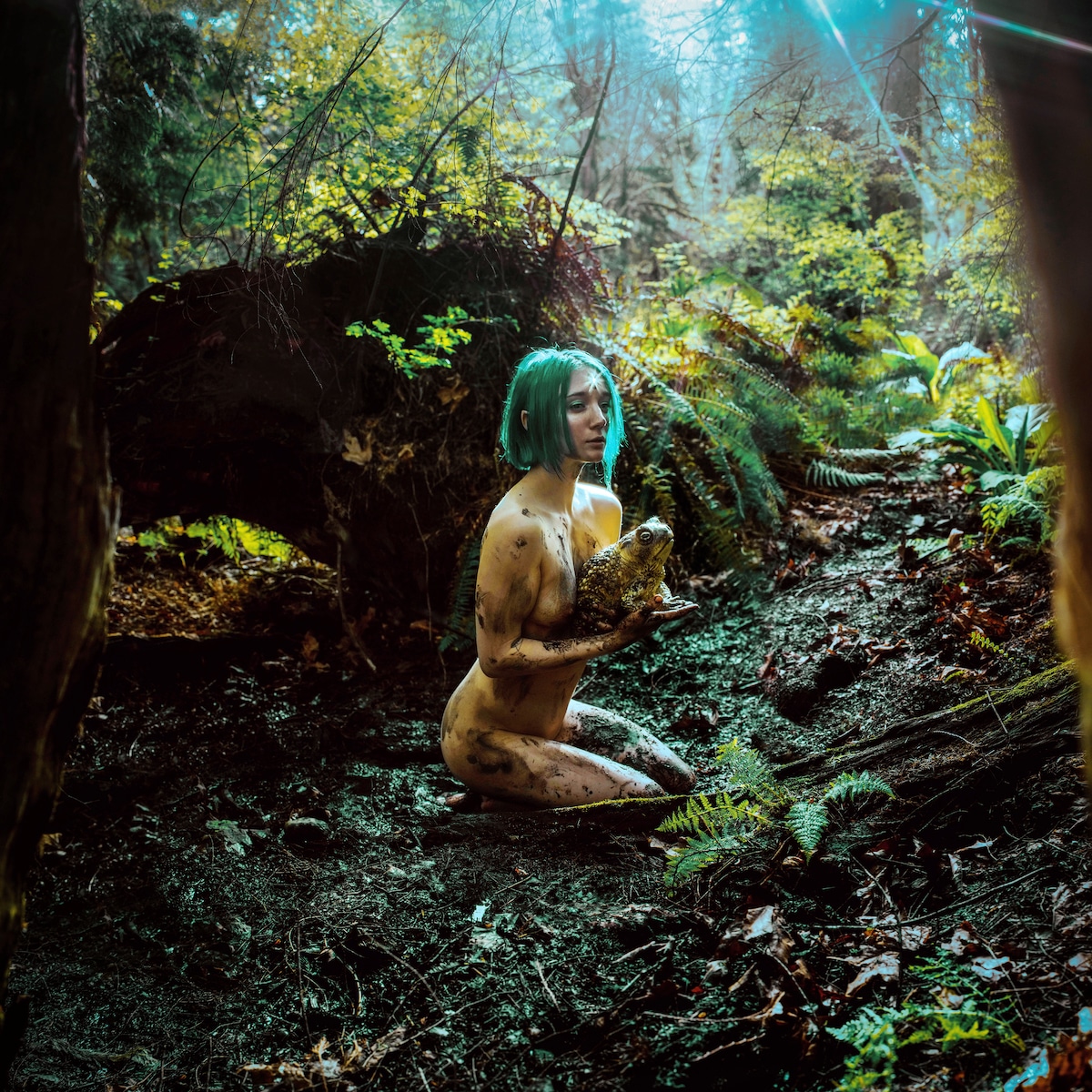 She of the Bog

Although it was years ago, how does the photo project continue to influence your practice today?

Even now, completing that project serves as a constant reminder of what I’m capable of—or what anyone is capable of, for that matter. Humans are creative beings and we have the ability to do so much with our lives and for the world, should we choose to. I truly believe that. One of my favorite quotes, from Mary Oliver’s poem “The Summer Day,” comes to mind: “What is it you plan to do with your one wild and precious life?” 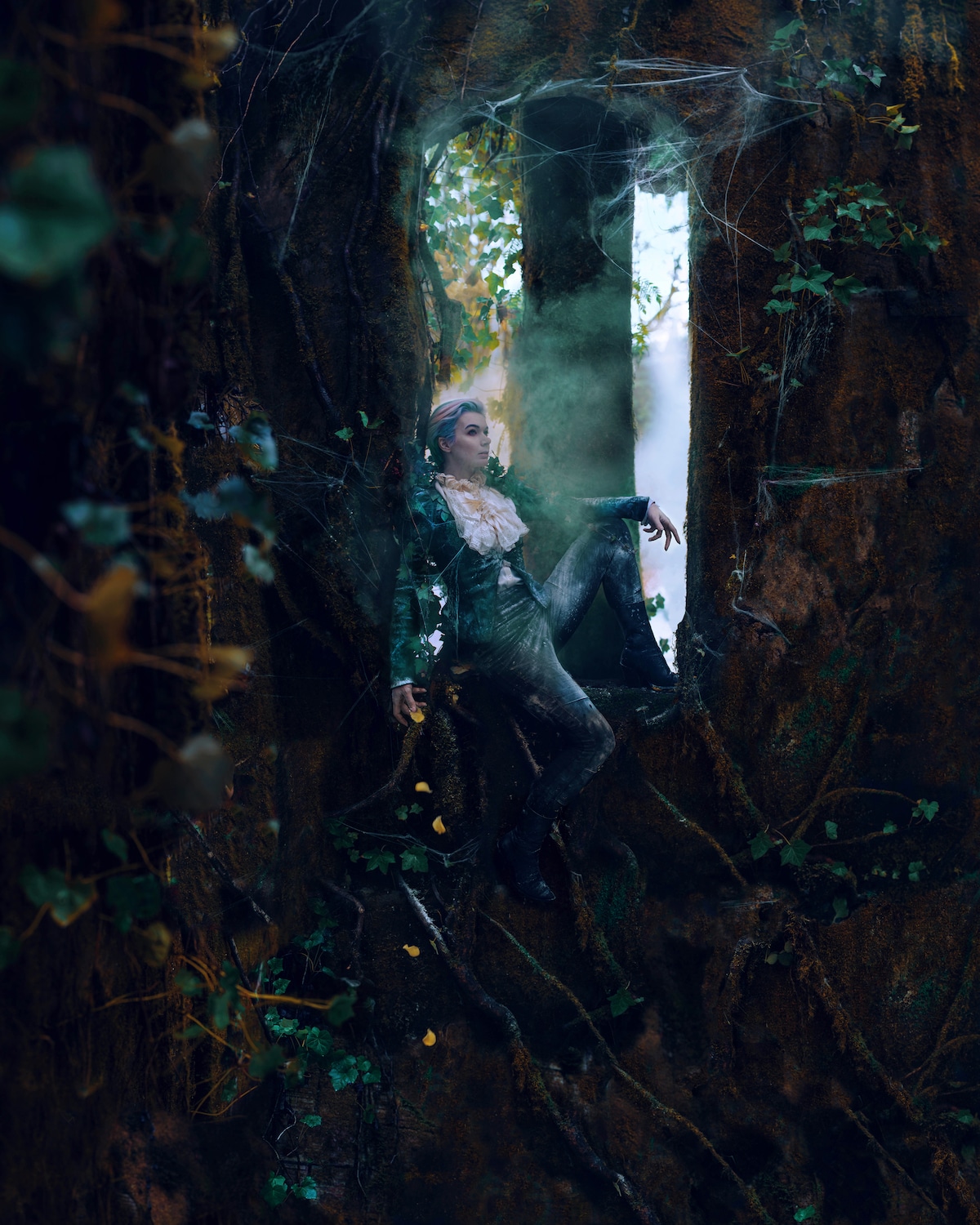 How did the exhibition in New York come about?

I’ve worked with Haven Gallery in New York for a few years now, and that’s how this exhibition came to be! Once you get into the gallery circuit, if you apply yourself and get to know folks, it really helps open doors to new opportunities. We’d settled on the show date about a year in advance, and I began preliminary planning of concepts back in autumn of 2018. I spent all winter and some of the spring shooting then spent a good while editing, and then finally creating physical art pieces from my work. This involves printing the pieces on archival paper, mounting them to wood panels, priming them, and finally resin glazing them, which is a laborious process. But the results are always so stunning—the glossy sheen encapsulating my pieces really helps bring the colors and moods to life.

What can viewers expect from this show?

Anyone attending the show can have a chance to see my work large-scale and hanging on the gallery walls—it’s a much different experience from seeing it on a computer or phone screen! It’s a real treat for me to see my work printed since I pour so much into the details of the pieces. The pieces are available for adoption, too, so people can have a chance to bring one home or even pick one up online (via Haven Gallery’s website) and have it shipped to them if they feel a resonance with a particular image. And for this show, I’ve created my largest physical piece to date—Return of the She-King sits at a whopping 36×48″! It feels amazing to see her in person after all these years.

Enchanted by these photographs? Share
Like My Modern Met on Facebook
Get Our Weekly Newsletter
Become a
My Modern Met Member
As a member, you'll join us in our effort to support the arts.
Become a Member
Explore member benefits