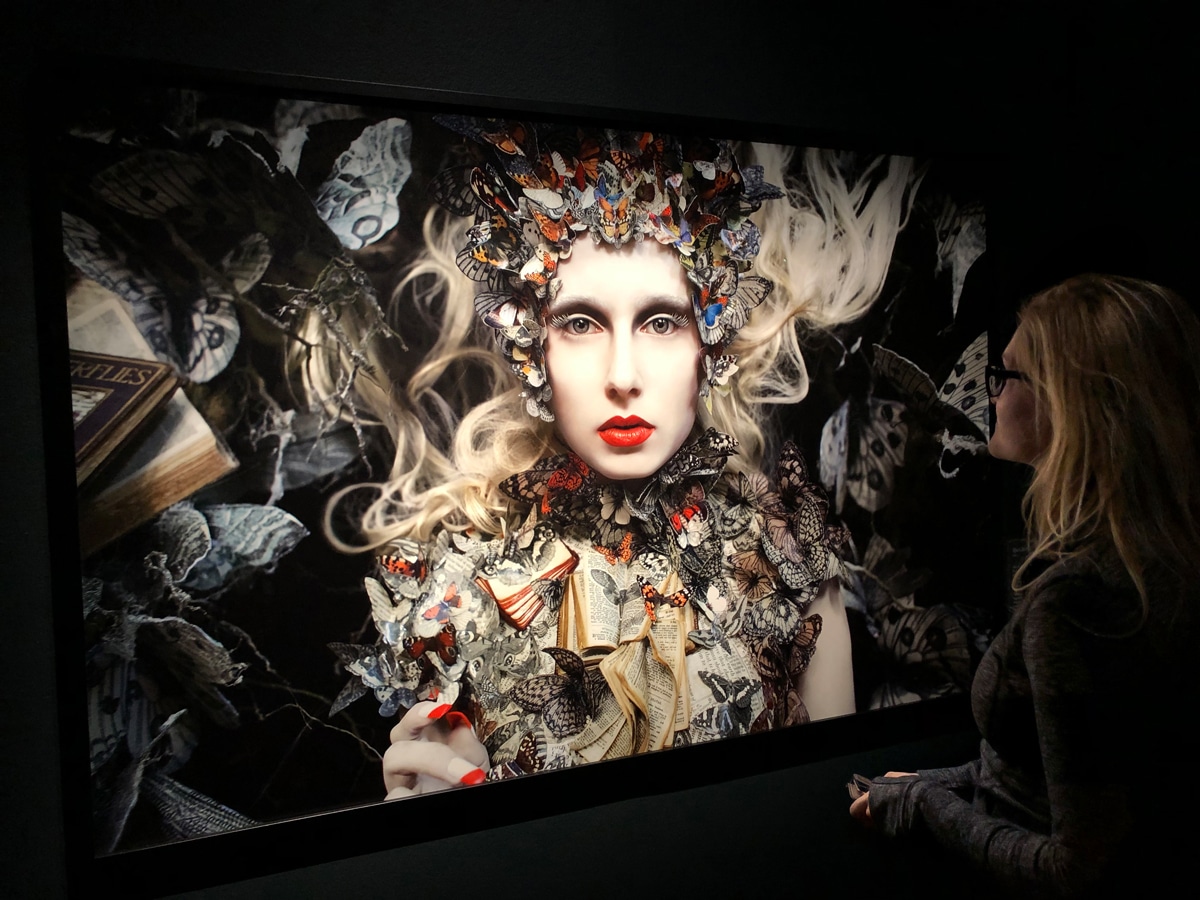 For many years, fine art photographer Kirsty Mitchell captivated us with her enchanting series titled Wonderland. The 74-image collection is beyond stunning. To create it, Mitchell used her education and career in costume and fashion design to produce fantastical scenes of intricate, hand-built outfits worn by models in idyllic landscapes. Each photograph is a moment of a story frozen in time that invites the viewer to fill in the blanks.

Wonderland, which we’ve covered extensively over the years, is born out of personal tragedy. It began in summer 2009—seven months after Mitchell’s mother passed away from cancer. As Mitchell tells it, “My world fell apart. Photography became my only escape when I could no longer talk about how I felt.”

With her mother gone, Mitchell began to create images in her honor. A former English teacher with a passion for stories, Mitchell’s mother collected unusual books which the photographer then tracked down the original editions of books she had grown up being exposed to. “It was the faded fragments of the book’s illustrations, mixed up with dreams and my experiences through the grief that eventually formed the narrative of the series,” Mitchell explains. “Ultimately it became a strange and beautiful place to remember and forget, both in the same bittersweet moment.”

Since completing the Wonderland images, Mitchell has continued to share it with others. She took two years to compile the collection into a huge volume of over 640 photographs aptly called The Wonderland Book, published in 2015. More recently, the series has become an immersive installation at Fotografiska in Stockholm. Calling it “a three-dimensional experience of the whole series,” Mitchell incorporated elements of darkness and sound to shed new light on Wonderland.

We were honored to speak with Mitchell about the exhibition at Fotografiska. Wonderland ends there on March 3, 2019, but it will be on view in London and New York in the future. In the meantime, scroll down for our exclusive interview.

Photographer Kirsty Mitchell displays all of her images from her Wonderland series in an immersive exhibition of the same name. 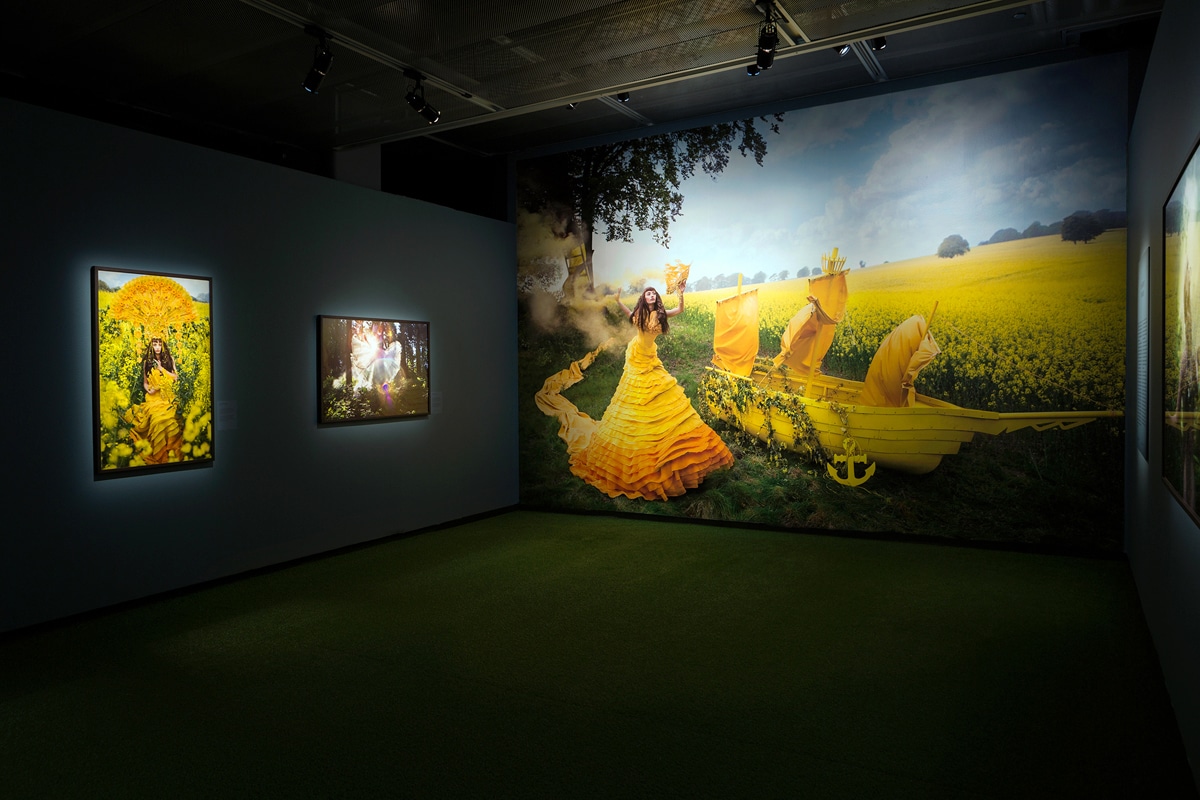 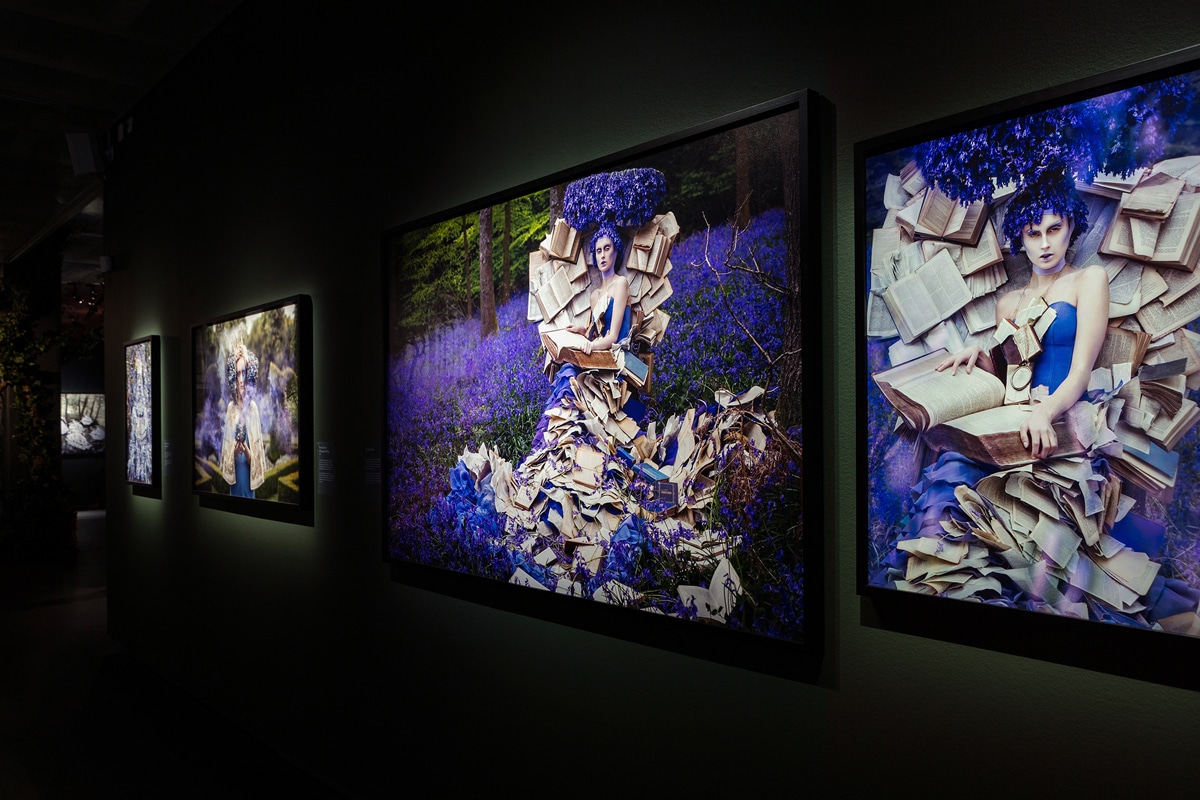 What can viewers expect when they step into Wonderland?

A dark, immersive and emotional experience that walks the visitor through the five years it took to shoot the series. This is the first time ever that all 74 photographs from the project have been exhibited together, as well the Wonderland films and inclusion of some of the props. The 480-square-meter exhibition hall also features five huge wallpapers of some of photographs and custom made sound design to transport the visitor into the scenes. Basically, this is the multi-sensory show I had often dreamt of over the years, but never dared imagine would come true. 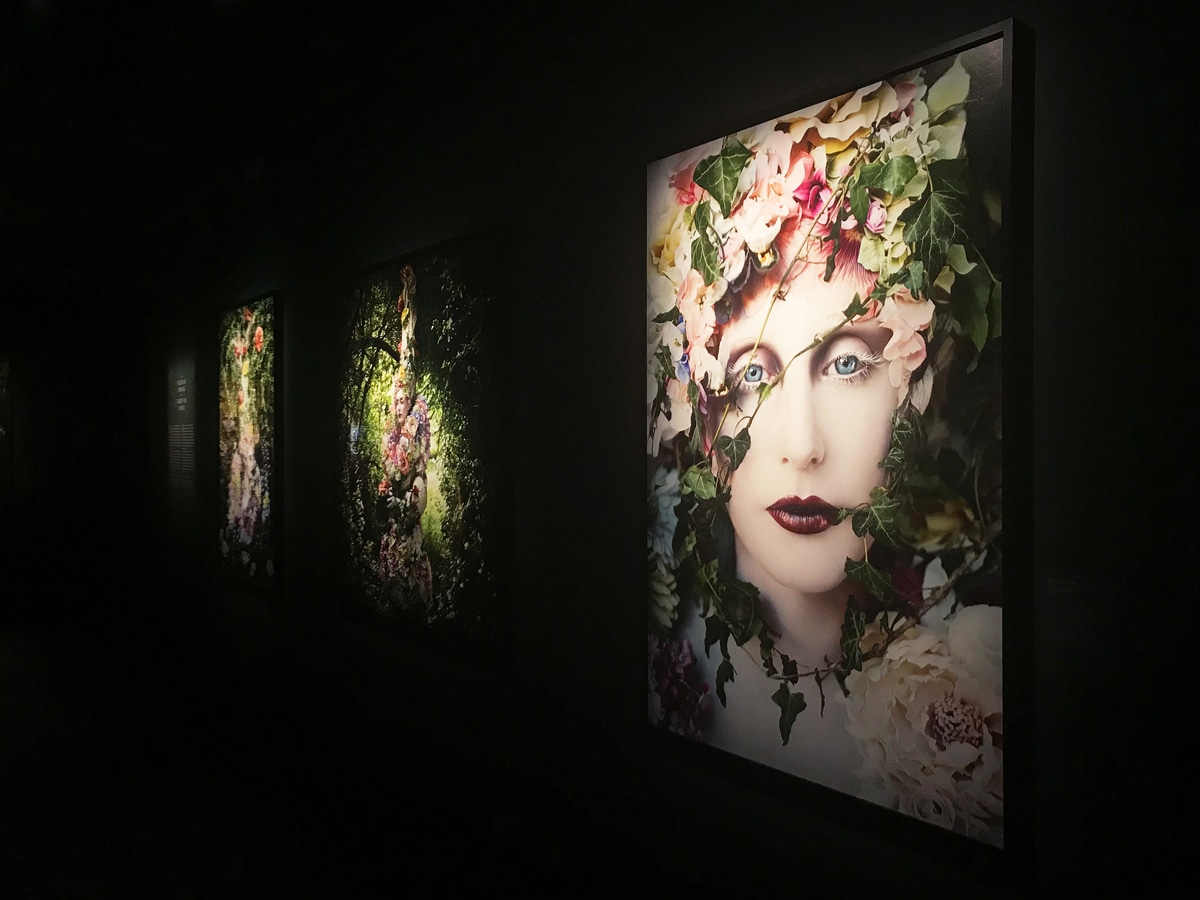 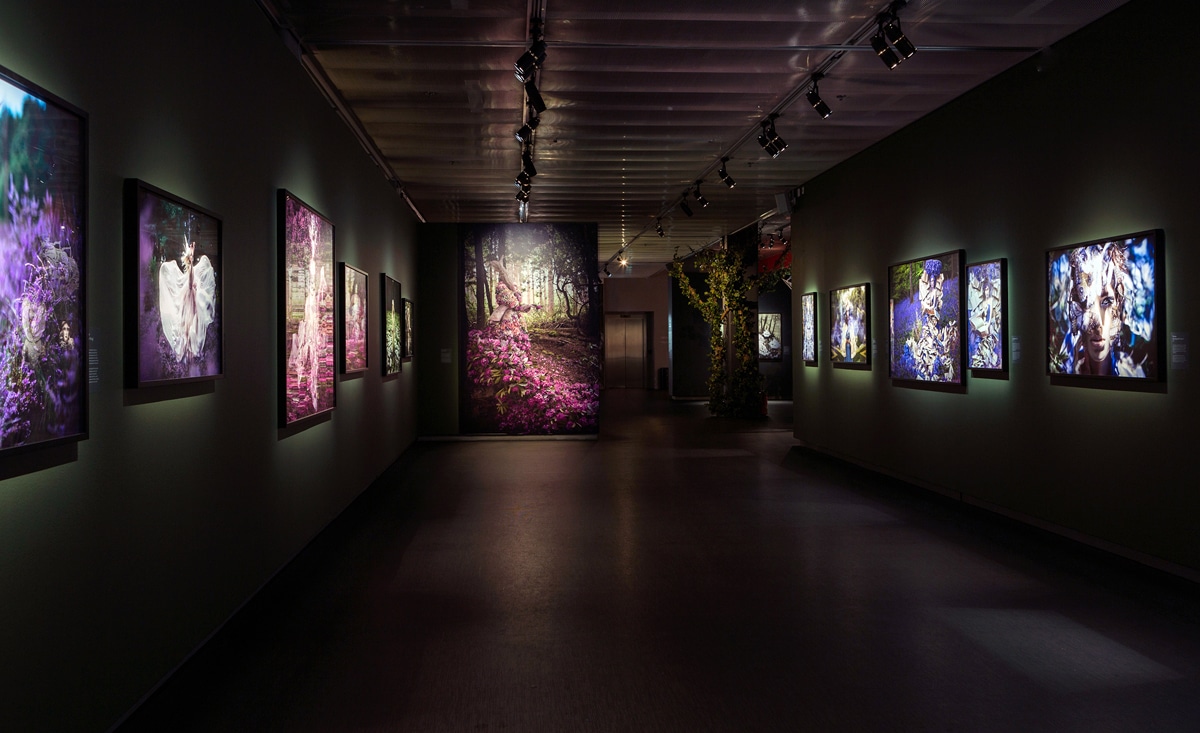 What is your favorite element of the show?

I am especially proud of the sound design which I collaborated on with LA cinematographer Devin Schiro. I’d never done anything like this before but really wanted a way to heighten the experience and reactions of the visitors to the work. Wonderland is extremely emotional and I’ve always imagined it in a cinematic way, so I was very excited when Fotografiska gave us the green light to incorporate this into the show.

There are three soundscapes in the exhibition hall. The first is when you initially walk into the darkness of the main entrance. Here, you will be confronted with a huge four-meter-wide The Faraway Tree and behind you is a wall covered in some of the earliest pictures in the series set into antique frames—almost like sepia premonitions of the characters you are about to encounter in the show. Next to these, there is a floor to ceiling extract from my book printed on the main wall, as an introduction to Wonderland. It sets the scene of when my mother used to read to me as a child, how I would lay my head on her chest and hear her heartbeat as she went through all the different character’s voices. And so Devin chose a combination of echoing footsteps, the creak of old floorboards, a ticking clock and a deep relentless heartbeat that immediately transports you into a maternal almost womb-like environment. It makes you feel like you are walking back into my memories with me. For this reason, I’d say the start of the show is quite intense and this feeling remains with you as you pass through the first corridor of photographs. 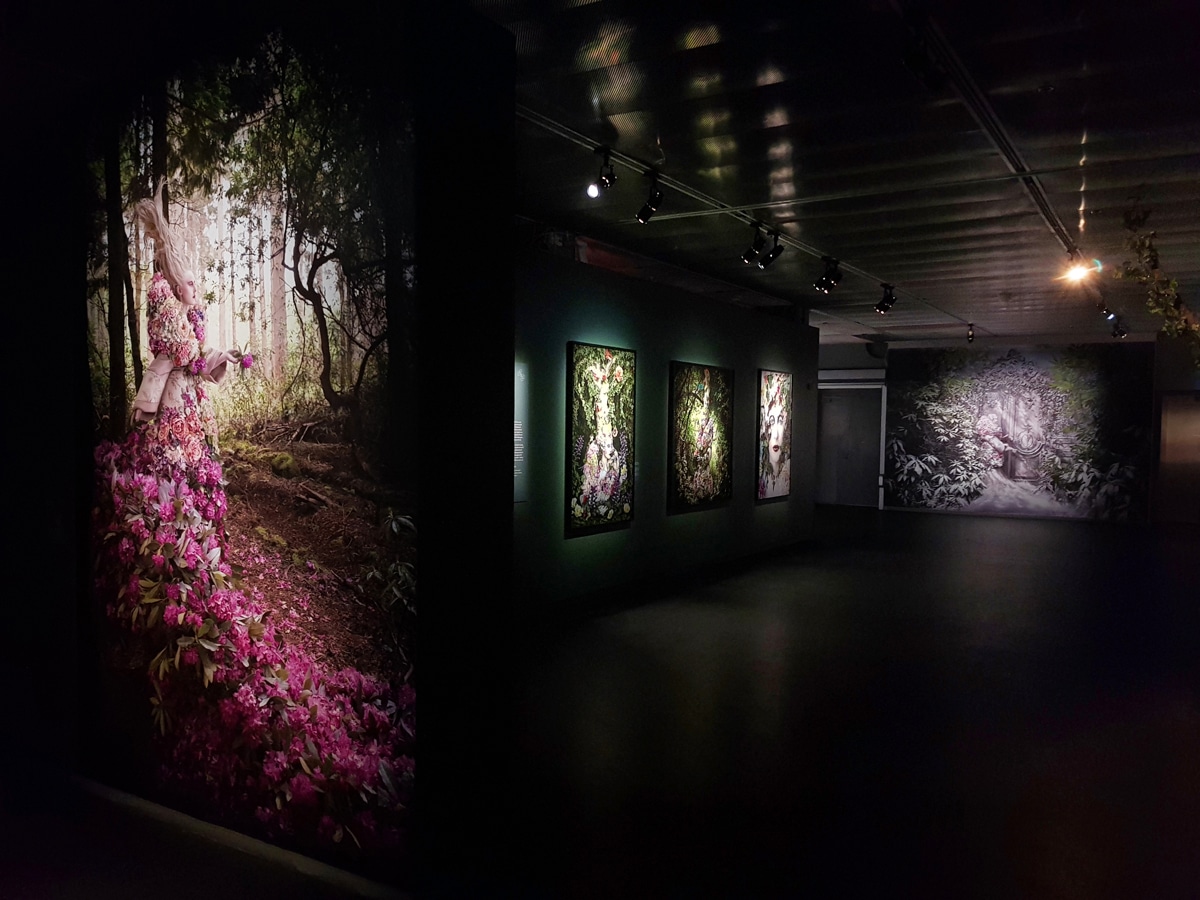 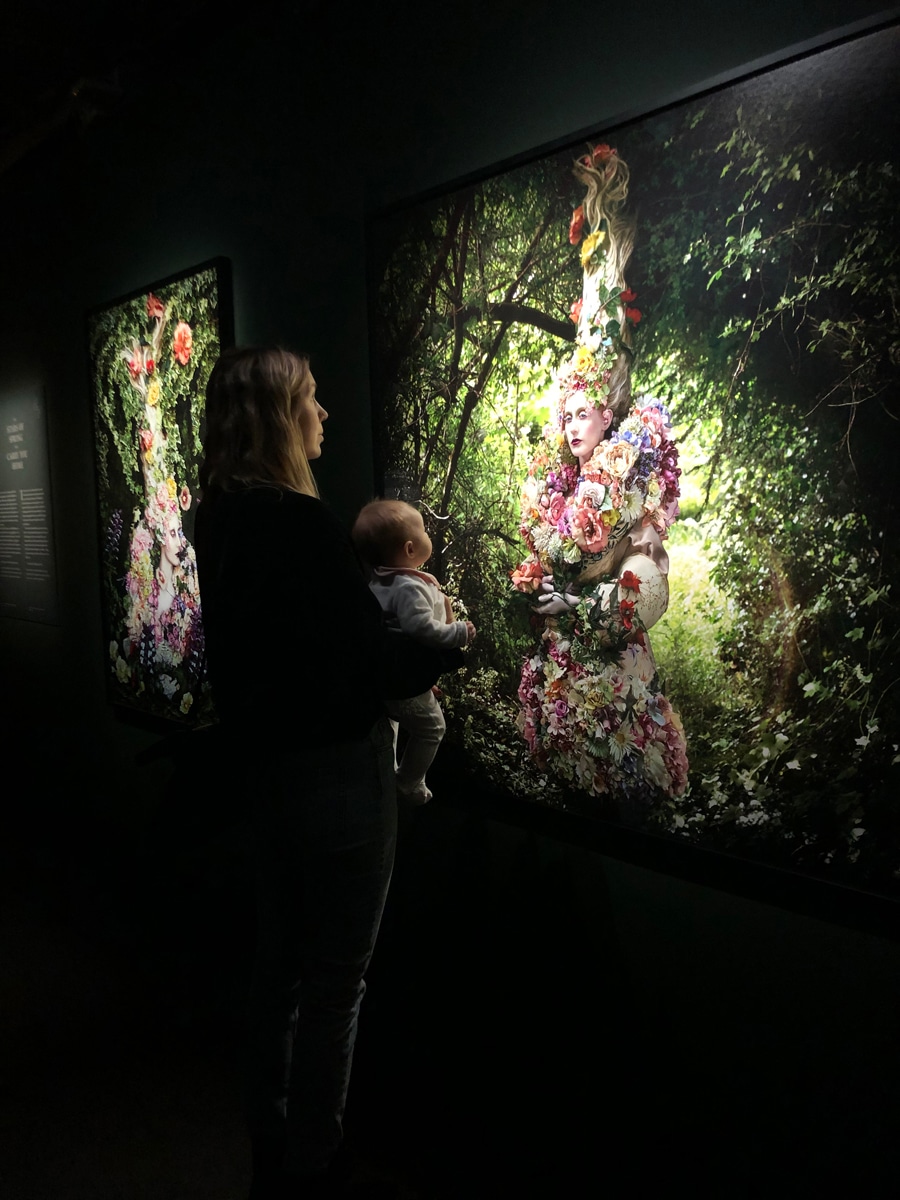 (continued) The second soundscape hits as you walk into what we nicknamed “The Summer Room.” Here you are confronted with a five-meter-wide Gaia’s Spell– a sea of yellow flowers under a bright blue sky. The floor in this section is covered with artificial grass and the room is filled with the sound of birds, breeze in the trees, and the echo of children’s laughter. I often found this part of the show overwhelming as it truly took me back to vivid childhood memories and of course my mother, I cried the first time I saw it all together.

Lastly, the final soundscape is for the closing scene of the series Home which is where the main character Katie finds her home deep in the snow after her five-year journey. For this, Devin combined the call of a robin, the crush of footsteps on snow, and the howl of a blizzard, all placed over beautiful classical strings… it totally rips your heart out, as you sit in front of this scene which was essentially about acceptance and letting go of grief. Together I felt the combination of sound with the photographs in the darkness, created an emotional rollercoaster of joy and sadness all in one moment. It leaves you oddly drained but also elated. 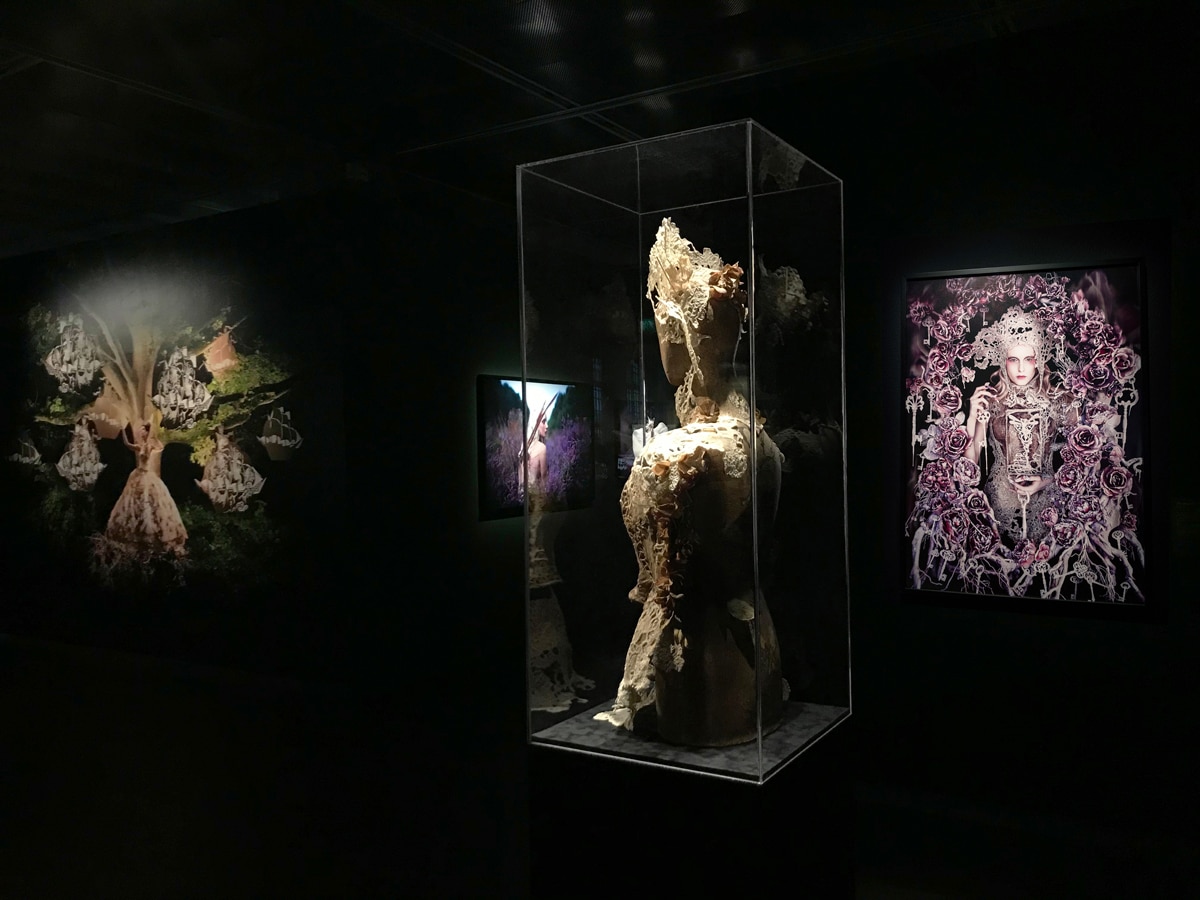 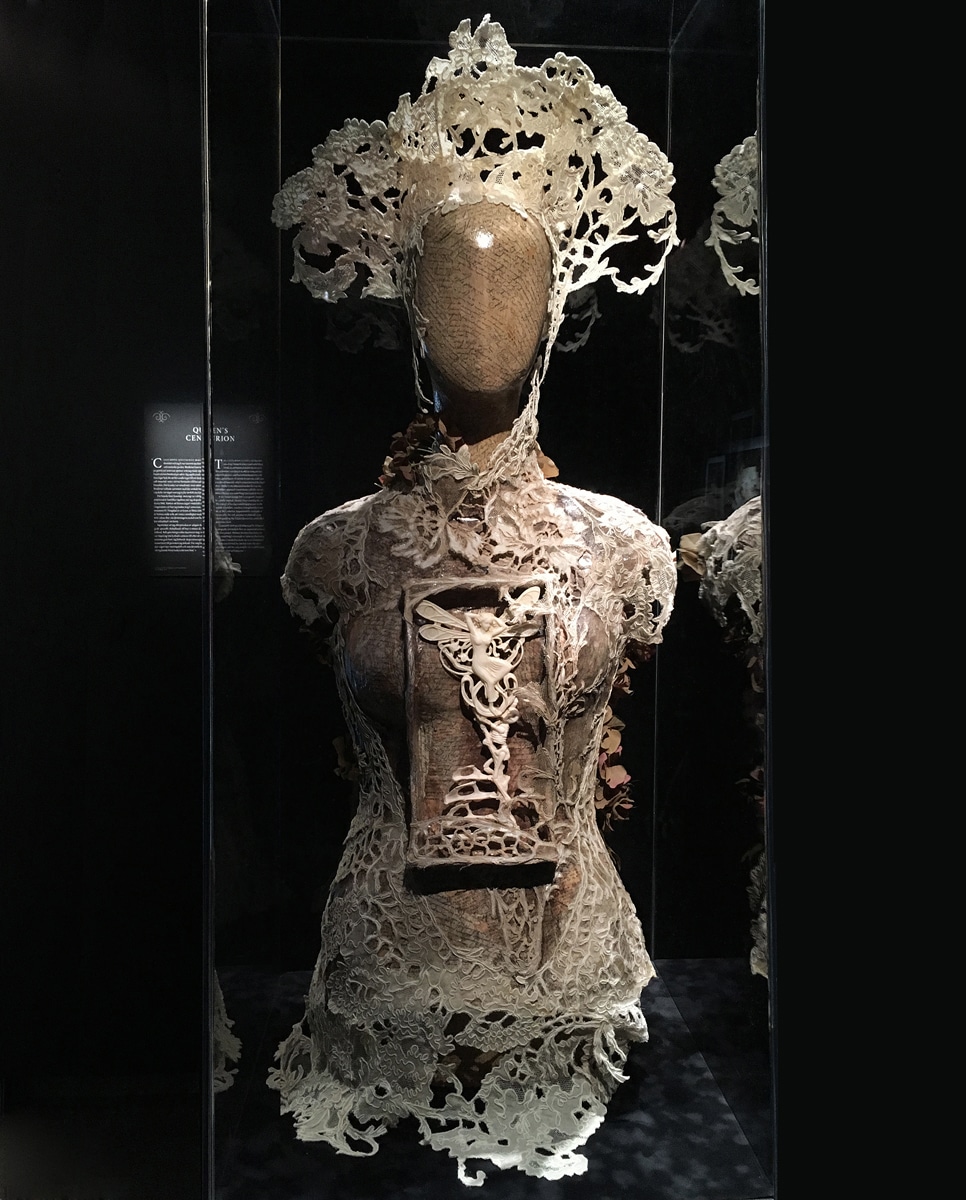 How has this exhibition differed from your past shows?

This show is unlike anything I have ever done before. The most impactful element is darkness. Typically, photography shows are always the generic white wall experience, you are very much aware of the room the work is hung in. But this show plunges you into complete darkness, the pictures are beautifully lit and almost appear to be 3D. Within the show, there are of course the soundscapes, as well as the supersized photographs created as wallpapers to allow the visitor to almost step into the frame. These transform the space and set a mood to each area which is loosely separated into the four seasons.

It was so wonderful to witness how people reacted to these, many saw it as a photo opportunity and posed themselves or their children in the pictures. I loved this element of play, I think people of all ages felt quite free within the walls of the show, if that makes sense?

The exhibit also contains two cinema rooms which had all the Wonderland films playing on loop, so people could watch how the pictures were created and appreciate the reality of them. Finally, there is the inclusion of a couple of the props from the series. Most of the costumes from Wonderland are too fragile to be transported internationally, but we were able to include The Queen’s Centurion’s bodice and one of the steel ships from The Queen’s Armada, which to my delight was actually hung from the branches of a real tree! 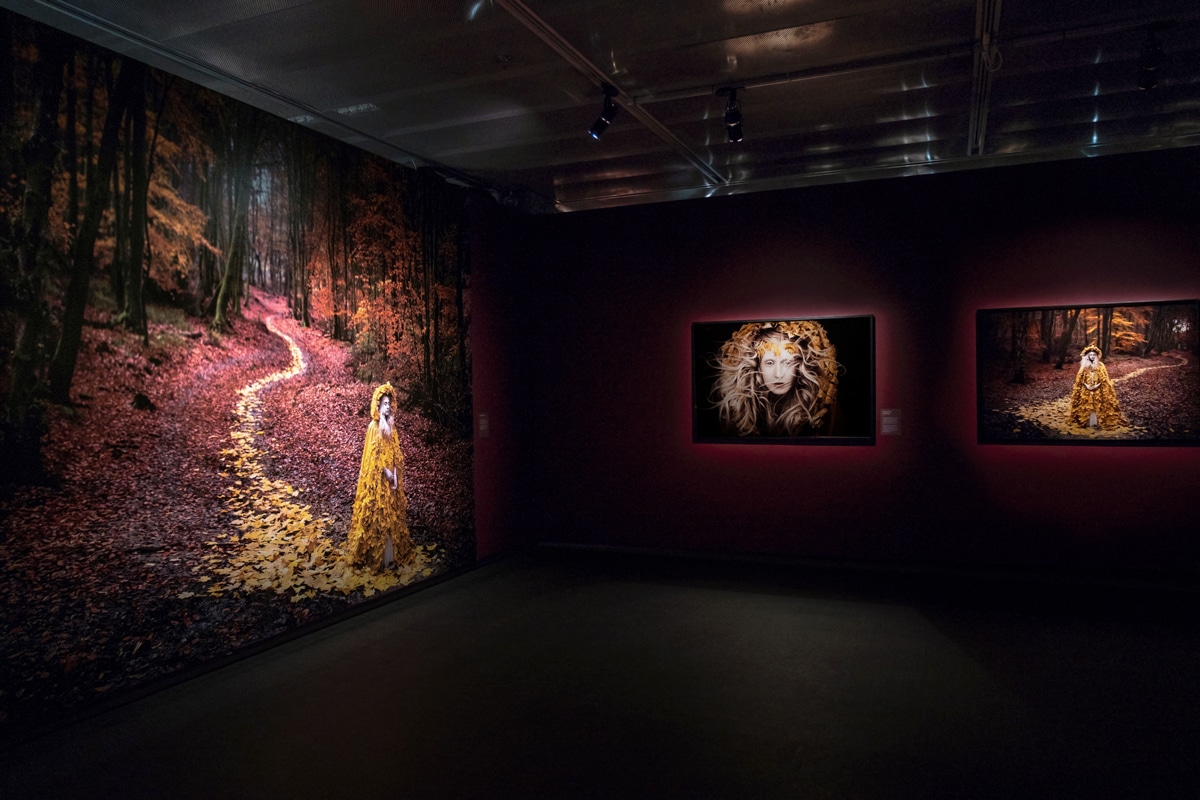 What was it like to plan and execute this version of Wonderland?

It was a huge amount of work, far more than I anticipated, but this show was such a big step up for me that I didn’t really know what to expect. It took three solid months of work between myself and the exhibition producer Lisa Hyden. From day one, I was really grateful that Lisa fully understood myself and the series. We wanted to communicate the focus of this show being about my personal journey through grief, and so I was also responsible for all the written text within the exhibition. I had to go back through the diaries I wrote during the five years of shooting the project (which are printed in the back of the Wonderland book) and adapted parts to not only explain the work but also pinpoint how I was coping in the real world at the various stages of its creation. These means that the show is truly everything I felt during that time in my life, the words I wrote, the photographs, the films… it’s like a three-dimensional experience of the whole series and that has been quite extraordinary to have been given the opportunity to do.

Next: More stunning shots from Wonderland.

Page 1/2
Like Kirsty Mitchell's work? Share
Like My Modern Met on Facebook
Get Our Weekly Newsletter
Become a
My Modern Met Member
As a member, you'll join us in our effort to support the arts.
Become a Member
Explore member benefits