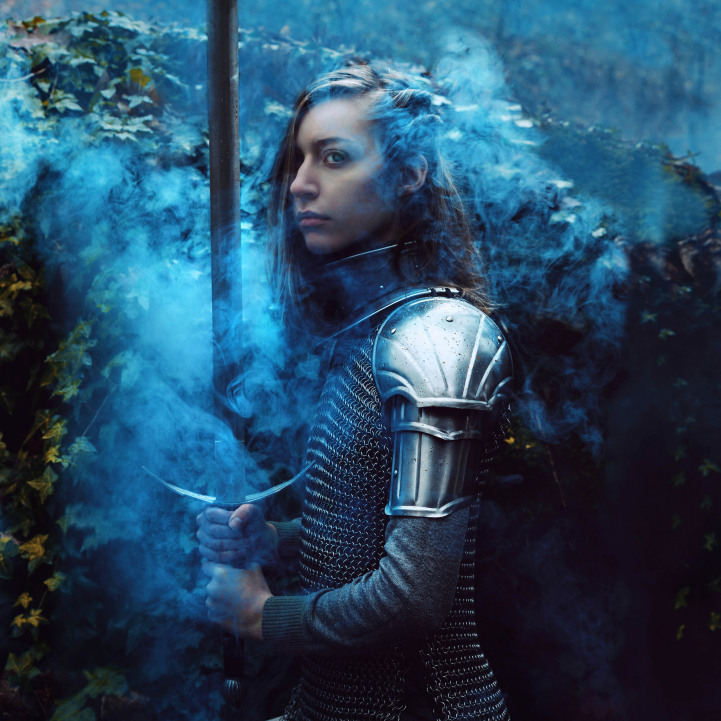 If you've been following along on My Modern Met, you've probably seen the dreamy and surreal imagery of Seattle-based photographer Kindra Nikole. For her latest series entitled Árísan, Kindra drew inspiration from a visit to Glastonbury, the legendary resting place of Arthur, King of the Britons (aka King Arthur). The photographer now captures the essence of the ancient castle ruins and imbues its historical setting with new meaning. Although women did not originally take part in battle, Kindra's images recreate history, imagining round table knights as strong, fearless women adorned in period armor.

From the snowy mountains of Canada to the green forests of the American Northwest to the castle remains of England, Árísan features beautiful landscapes that perfectly set the mood for each scene. Using bold, dreamy color paired with the same attention to detail we've come to love about Kindra's work, this series offers an alternative portal to King Arthur’s time.

We were grateful to catch up with Kindra for a Behind The Lens look into her new series! 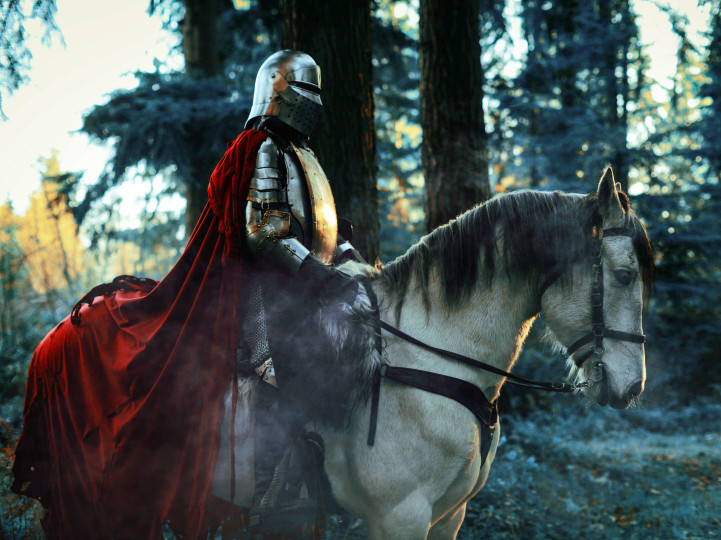 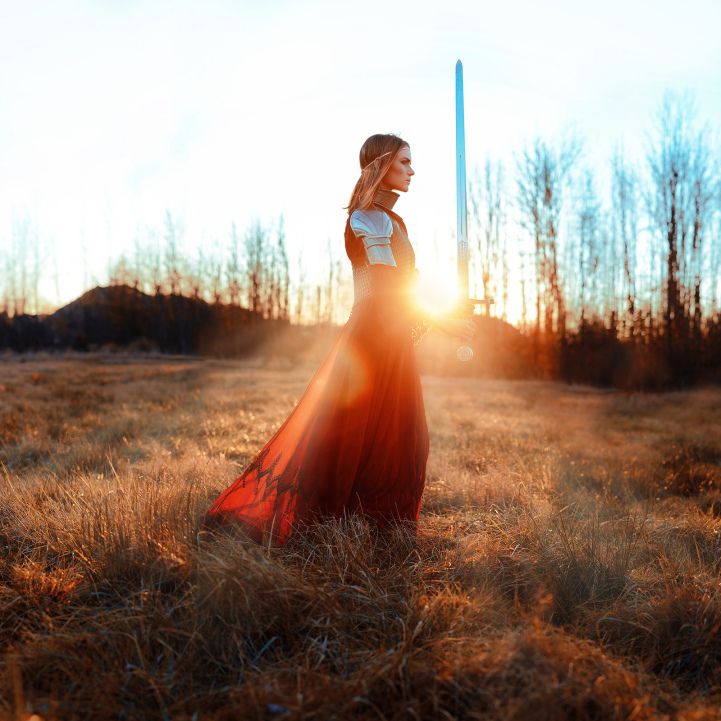 What inspired your new series, Árísan?

Just over a year ago, I traveled to England for my first time. During my visit, I had the privilege of visiting Glastonbury, the legendary resting place of King Arthur. I visited quite a few castles in England, but Glastonbury Abbey and the Tor in Glastonbury struck me very deeply, square in the heart. Those places hold such rich history that even the air feels different. I immediately felt compelled to create a series about Arthur’s knights, but I wanted to do something other than simply re-create scenes of how things might have looked. I loved the idea of female knights, bound by honor, strong and fearless and just. This series breathes life into a “what if” that I have always wanted to explore.

What is the meaning of the name “Árísan” and what is it's significance?

Árísan is Middle English and means to ascend! So not too different from the common English of “arisen.” I felt that this series had risen straight out of my heart, hence the title. I decided to keep with the overall medieval theme by titling some of the images with Middle English, such as Earendel, which means “shining light” or “ray of light,” and Orðian, which means “breathe” or “long for.” I also titled my short film linked to the series as Hælestre, which is a feminine noun meaning “savior.” The name holds particular significance for the film, but I don’t want to spoil anything, for those who haven’t seen it yet! 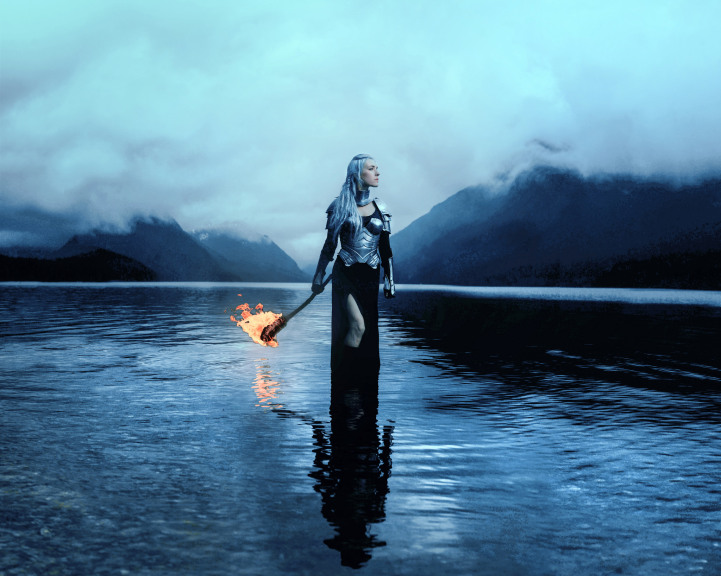 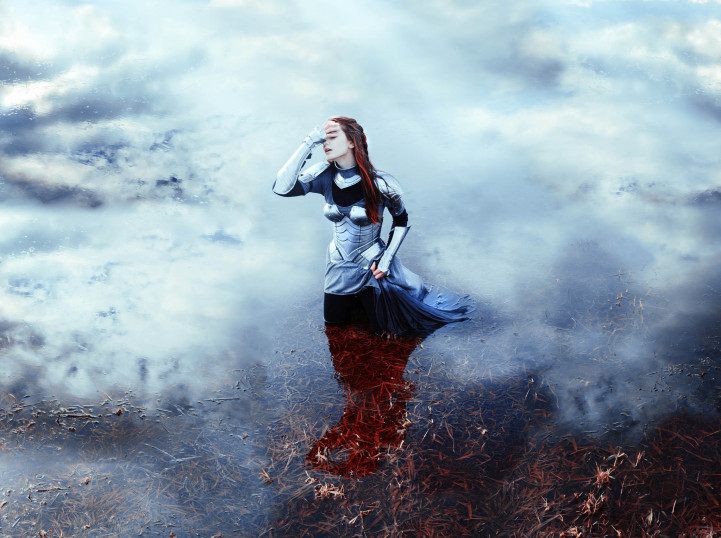 How much planning goes into a shoot?

It varies for each image, but for this series, the most planning was done for the images shot in more remote locations, like Breathe, which was shot in the snowy mountains of British Columbia, Canada. Hælestre was shot on site during one of the days I did filming, and the model was wearing nearly 100 pounds of armor, mounted atop the steed. I knew exactly what I wanted each image to look like for this series, so it was mostly a matter of finding the props and armor and then location scouting.

How much work went into designing the props and costumes?

For this series, I was lucky enough to connect with some local groups that do lots of medieval reenactments, and through them, I got my hands on some armor I was able to borrow. The armor was a necessary component to creating the knights in this series, so I’m extremely grateful for all of the pieces I was able to borrow to make the images happen as I saw them in my head! 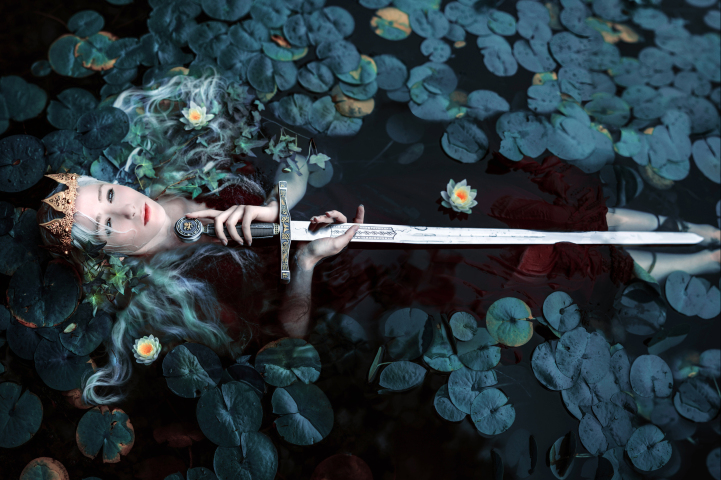 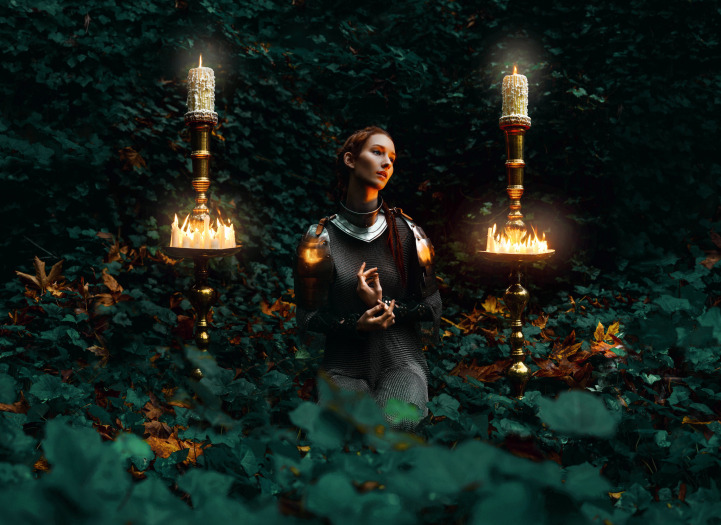 What does a typical day of shooting look like?

Usually me running around my house in the morning, drinking loads of coffee, and ensuring I have all the props needed before I leave my house. I’ve made a habit of packing protein bars into my backpack and glove compartment in my car, because on the day of a shoot, I often forget that eating is necessary to human survival…

Aside from that, I also charge a few camera batteries the night before and pack a backup just in case, and then the model and I meet up at my place or a coffee shop and head out to the shooting location!

Sometimes I bring a tripod, but usually I prefer to shoot freely so I can quickly try out various angles and see what’s clicking and what isn’t for the composition. Having an assistant is always really nice, too, though I often shoot with just myself and the model. For me, the less people on location, the better—it allows me to tap into a creative space that I find harder to access when there are distractions or too many people around.

How much post processing goes into the finished image? Do you have any tips?

Quite a lot, though it also varies by image. I do light retouching and make sure not to go overboard there. I like it to feel as believable as possible, so I take a light hand to that type of editing. Usually I go nuts with color more than anything else. I love playing with colors and creating a scene that looks otherworldly, and color seems to help achieve that more than any other type of post-processing I tend to do.

One tip I’d love to share is that it’s really important to allow yourself to edit freely and especially to experiment. It’s easy to fall into habitual editing patterns and then your work starts to feel formulaic, which ultimately shows in the end product, too. It’s nice in the sense that your style can become very defined by your editing patterns, but I also heavily ascribe to the notion that allowing yourself to “play” with your pieces is an absolute must for growth. So tinker with things. Press a button: see what it does! Tweak a little here, a little there. It’s kind of like cooking from a recipe but allowing yourself to add in some unexpected spices or extra veggies if you feel like it, regardless of what the recipe is telling you to do. Maybe that’s a weird metaphor. 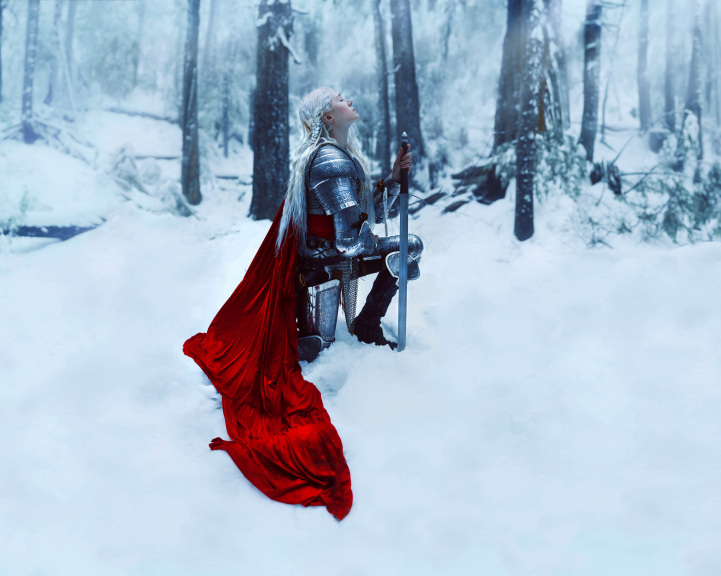 What are some challenges you have faced while creating this series?

Armor is VERY heavy. Suiting someone up in full armor can take nearly thirty minutes, and the person wearing it will become fatigued after awhile, even if they’re trained to wear it! When we were filming, one of the actors was sitting in a plastic chair, fully armored. Let’s just say there was a battle of epic proportions between the actor and the chair, and the chair won. Or lost? Either way, the chair split in two, and the actor was sprawled out on the frosty grass with no way to get back up without assistance. So the actor just decided to lay there for a while, to rest from all of the weight of the armor.

Also, armor can get very hot or very cold, which can make for some miserable shooting conditions depending on the environment. Like in snow. I feel like both myself and basically everyone who modeled for this series is the tougher for it.

What have you learned from this project?

This series was the first time I’d ever worked on all the images at once before releasing anything publicly. This allowed for a type of privacy that I’d never before experienced, and I can’t recommend it enough. I was able to let each piece “speak” to me as I worked on them quietly in my home, and I was even able to edit pieces in ways that allowed them to work together in a joint composition. You’ll see that reflected in Nimiane and Camlann Fields when they’re viewed side by side, or with Cursed Wight, Of Valor, and Wælmist, which form a sort of triptych. It was initially unintentional, but once I had all of the raw images together, I saw the potential to make them work in tandem, which was a first, and really neat for me!

This was also the first series I’ve released all at once to the public in physical form rather than as digital images online, which was, to say the least, a very powerful experience for me as an artist. Prior to my solo show’s opening night back in February, when I brought this series out into the world, I had no outside input at all into what I was creating. Sometimes input from others is extremely beneficial for creative growth. And sometimes we just need to be little kids alone in our rooms again, with nothing but our crayons and our blank white paper and our imaginations. 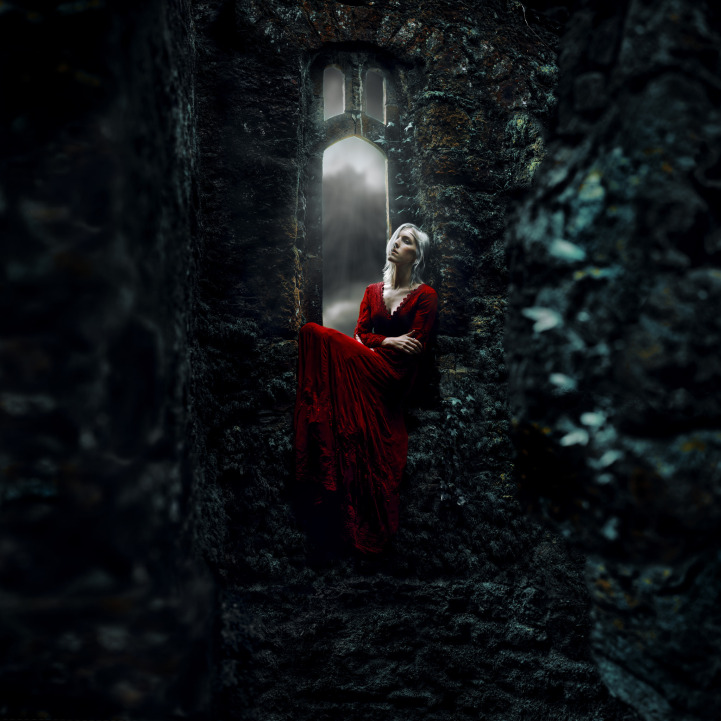 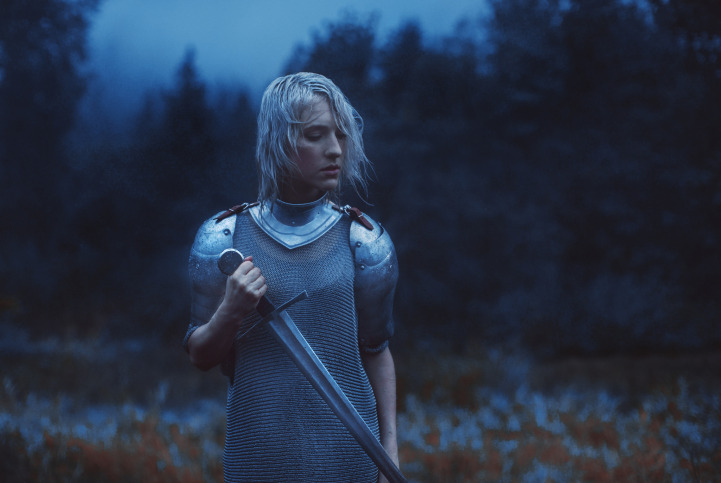 Is this series ongoing?

Perhaps. I have a few unedited images from the series that I may yet work on, and I have a few more concepts floating around that I’d like to shoot for it, but for now, it’s paused.

What are your plans for the future?

To continue traveling as often as possible, and to continue exploring my art. When I first started photography a few years ago, I had no idea what I was doing or where it would take me. I knew only that it was what I wanted to do—what I felt like doing. And that hasn’t changed. It’s what I feel like doing, and it’s now a lifelong journey—one that I’m grateful to be on. So whether I’m shooting new concepts, playing with creating physical pieces of my work, trying my hand at filming, or any number of other things, I know I will always be creating art until the end of my days. 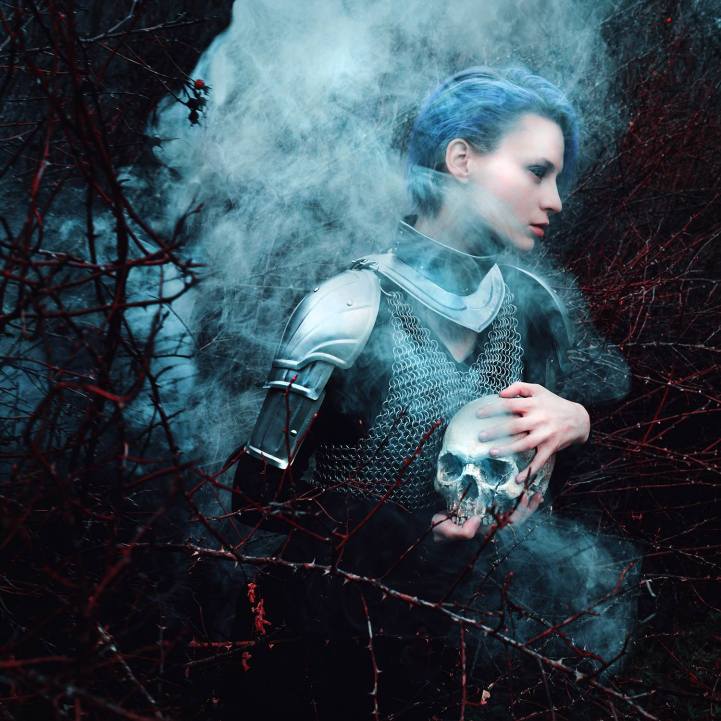 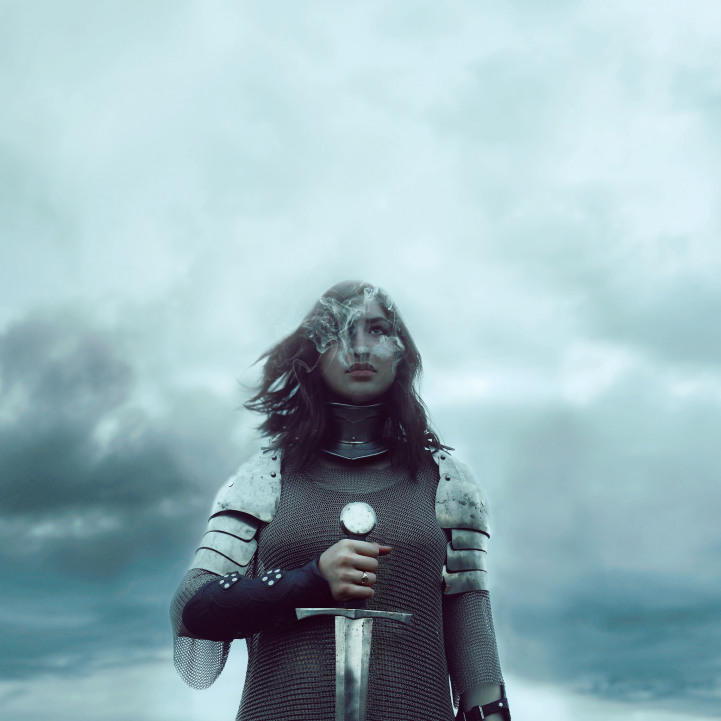 Thank you so much, Kindra! If you would like to stay up to date with this talented photographer's work please visit her website.

Are you a photographer? Would you like to be interviewed for our Behind The Lens series? Leave your website in the comments below!