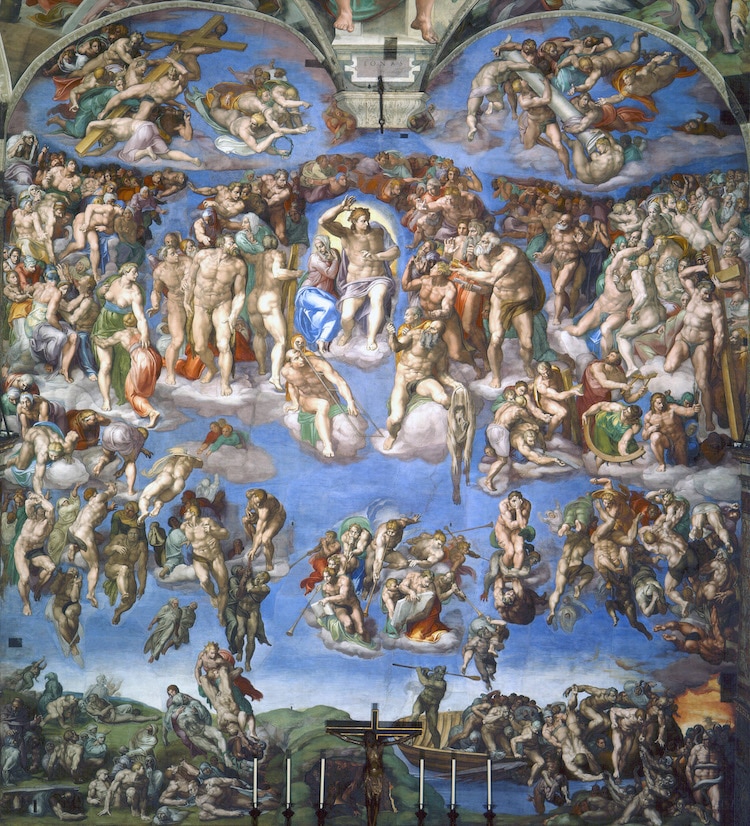 As one of the greatest artists of all time, Michelangelo has a long list of masterpieces. This genius of the Italian Renaissance was a sculptor, painter, and poet whose work has left an indelible mark on the history of art. Some of his most celebrated pieces can be found in the Sistine Chapel, located inside the pope's residence at the Vatican in Italy.

When we think of the Sistine Chapel, perhaps the first thing to come to mind is Michelangelo's incredible ceiling fresco that shows scenes from the Bible's Book of Genesis. However, there is another equally impressive artistic feat from Michelangelo in the same room. The Last Judgment, which was painted several decades later, is a powerful fresco that covers the entire altar wall.

Painted when Michelangelo was fully in his mature style, the artwork instantly made an impact and stirred controversy. While this final judgment of mankind was not an unusual subject for a Renaissance artist to tackle, Michelangelo made it uniquely his own using a style that was both appreciated and disparaged.

Let's take a closer look at the history of this iconic fresco and learn more about how The Last Judgment has made a lasting impact. 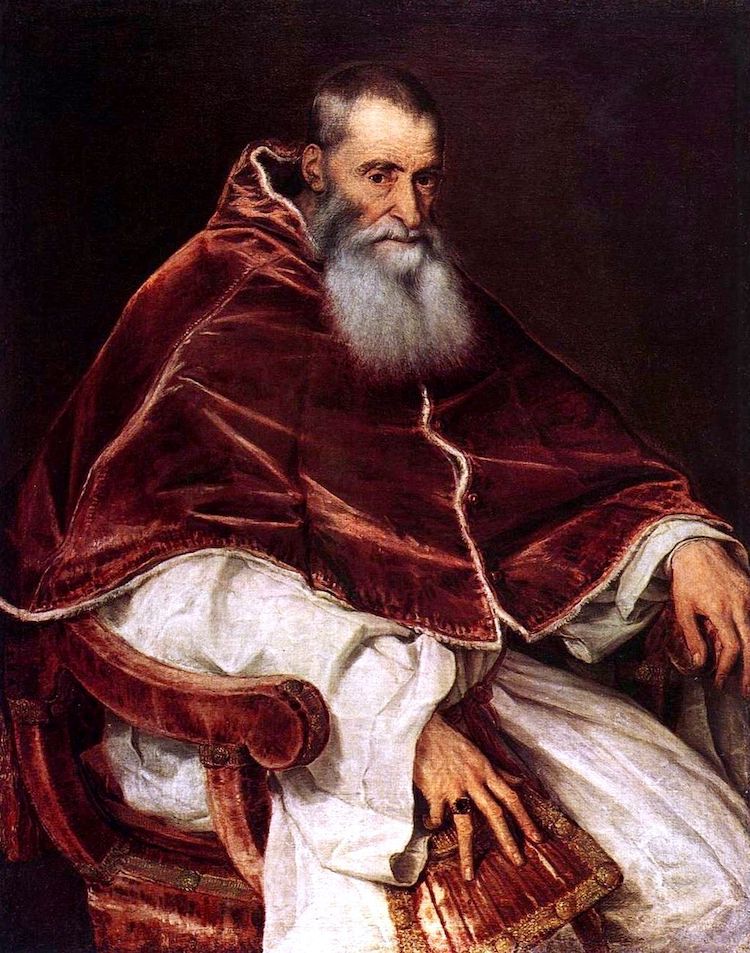 It would take 25 years to draw Michelangelo back to Rome and the Sistine Chapel. The artist came into the project after a long, successful period working for the Medici family in Florence. After a tumultuous period where the Medici’s were first overthrown and then regained power, Michelangelo embraced the chance to return to Rome.

There he was welcomed by Pope Clement VII, who commissioned the artist to paint a new fresco on the altar wall of the Sistine Chapel. Unfortunately, the Pope would die shortly after giving out the commission, but his successor Pope Paul III made sure that the work was carried out.

Iconography in The Last Judgement 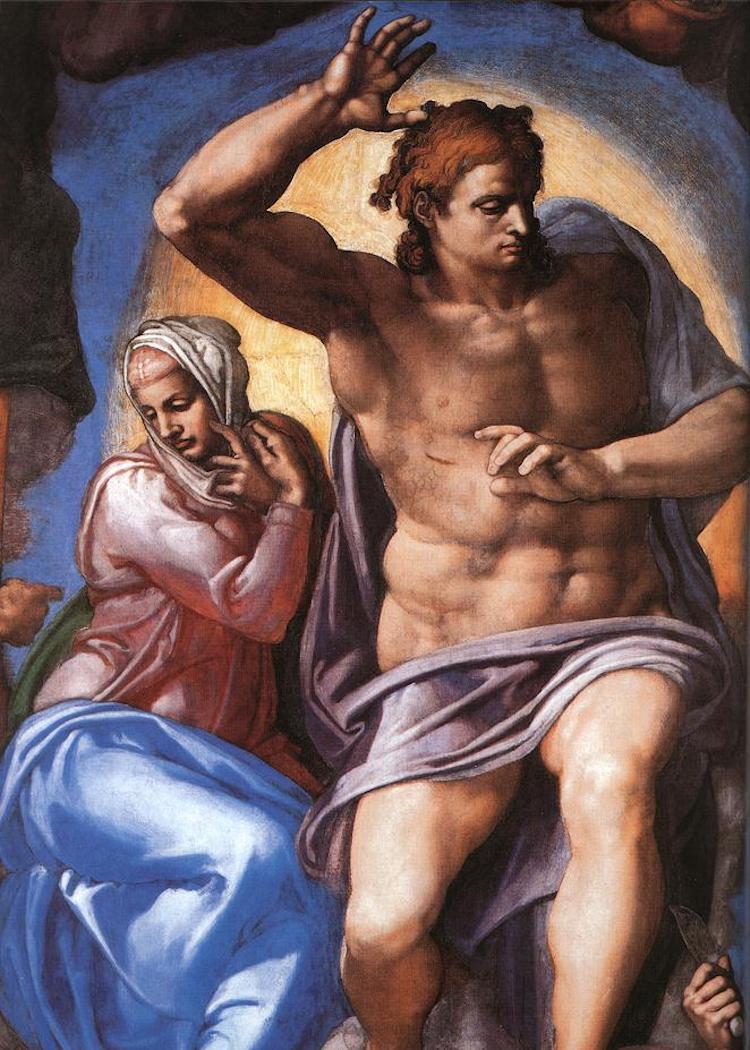 Christ and the Virgin Mary in ‘The Last Judgment' (Photo: Public domain via Wikipedia)

This new wall in the Sistine Chapel would have a specific theme—the Last Judgment. The depiction of the Second Coming of Jesus Christ and God’s final judgment of humanity was a popular subject throughout the Renaissance. For example, Giotto—thought of as the father of the Renaissance—is well known for his Last Judgment in the Scrovegni Chapel in Padova.

Michelangelo’s take on the subject has, over time, become iconic. In the fresco, we see over 300 figures expertly painted to carry out this story. Christ sits in the middle, his hand raised in casting judgment on the damned who sink into the depths of hell. Ripplingly with muscles, this Christ is an imposing figure.

To his left sits the Virgin Mary. She’s taken on a demure pose in contrapposto and looks toward those who have been saved. Immediately surrounding this central pairing is a group of important saints. St. Peter, who holds the keys of Heaven, and St. John the Baptist are both shown on an equal scale to Christ. 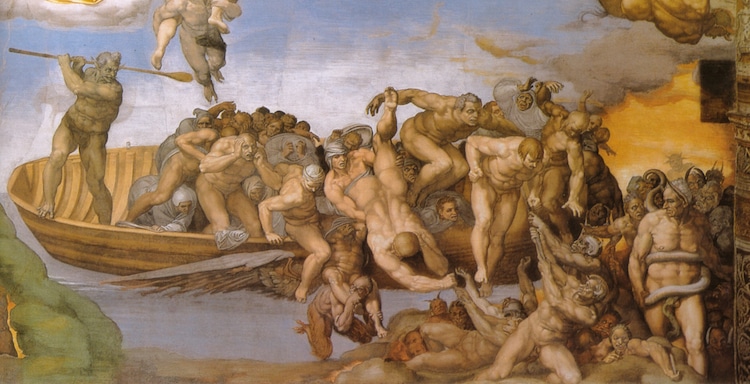 Charon and souls of the damned (Photo: Public domain via Wikipedia)

The overall composition circles in a flowing motion, with the saved on Christ’s left pictured rising up from their graves while the damned are pushed down into hell. At the bottom of the fresco, we see Charon, a mythological figure. In Greek and Roman, mythology he ferried souls to the underworld. Here, he’s carrying them straight to hell, which is filled with ghoulish characters.

Hidden Symbols in the Painting

Within the overall scheme of the painting, Michelangelo inserted several hidden symbols that have come to delight the public over time—though they weren’t always appreciated in his day.

The first is a rather gruesome self-portrait painted into the saint sitting just below Christ’s left foot. He sits on a cloud with skin in his hand. This is Saint Bartholomew, who was martyred after being skinned alive. Therefore, he’s not only holding the knife used to flay him but his own flesh, too. It’s widely believed that the face on the skin is actually a self-portrait of Michelangelo. 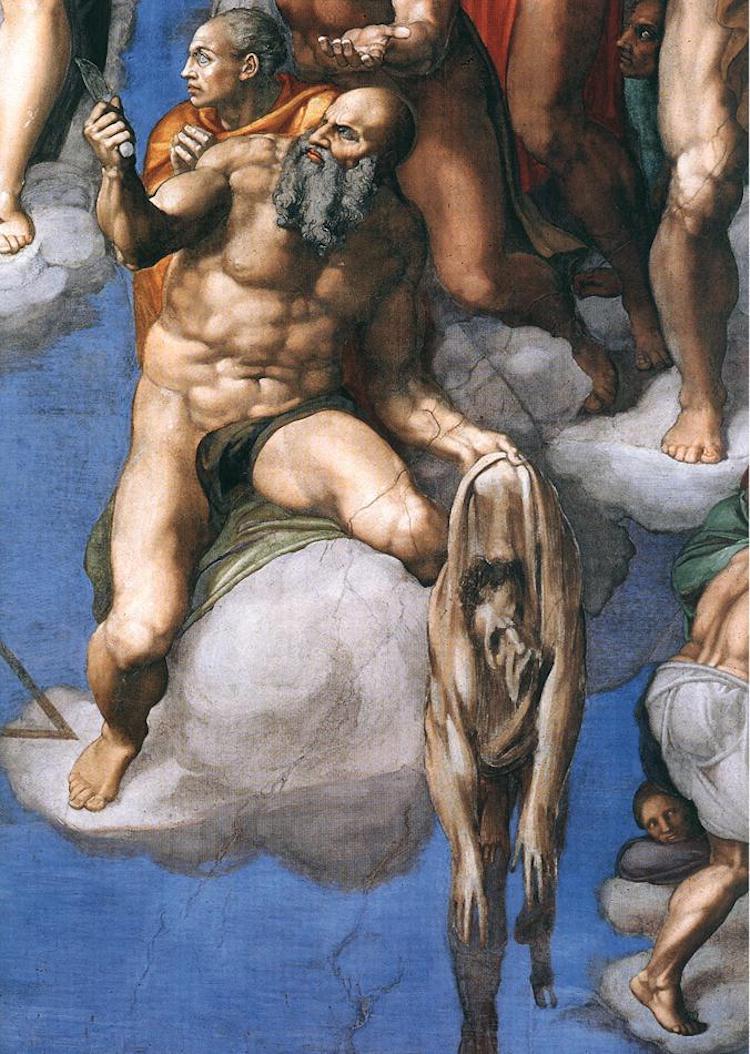 Michelangelo also added his own flair in a way that immediately stirred up controversy. In the lower right corner of the fresco, a group of the damned stands clustered together. One particularly gruesome figure is a man that not only has donkey ears—referencing his foolishness—but unfortunately has a serpent wrapped around his body with the snake biting on his private parts.

During a preview of the fresco with Pope Paul III, his Master of Ceremonies Biagio da Cesena immediately noticed an issue. Somehow, he’d found himself placed into the fresco as this unflattering figure. The character itself is actually Minos, the mythological judge of the underworld, and somehow Da Cesena had sparked the artist’s ire and wound up down in hell. When he complained to the Pope about how he was shown in the fresco, it’s said that the Pope simply joked that his power didn’t extend to hell so the portrait would need to stay. 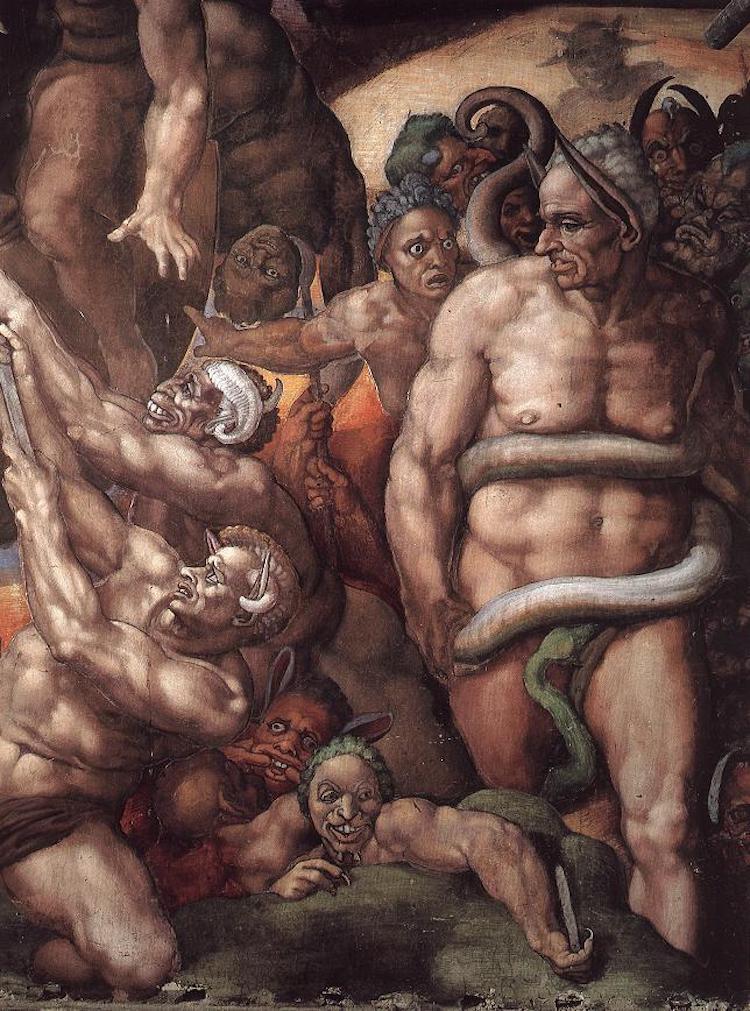 It wasn’t only Da Cesena who wasn’t thrilled with how Michelangelo played with tradition in The Last Judgment. Many within the church were still reeling from the Protestant Reformation and trying to implement spiritual reforms. They didn’t appreciate the way that Michelangelo mixed mythology with religious figures, and they certainly didn’t appreciate the copious amounts of nudity.

Their anger was counterbalanced by those who appreciated the artistry of Michelangelo and felt that the work should be admired for his genius and painting style.

Other critics felt that Michelangelo should have adhered more closely to the event as described in the Bible. They pointed out that Christ should be seated on a throne and that some of the drapery that appears to blow in the wind wouldn’t be possible, as the weather was supposed to stop on judgment day.

The controversy continued to grow in the years following the fresco’s completion. This was only emphasized by the new reforms on religious art that the Council of Trent instated in 1563. In the official decree, anything “superstitious” or “lascivious” was to be avoided. And, unfortunately for Michelangelo, “the pictures in the Apostolic Chapel should be covered over, and those in other churches should be destroyed, if they display anything that is obscene or clearly false.” 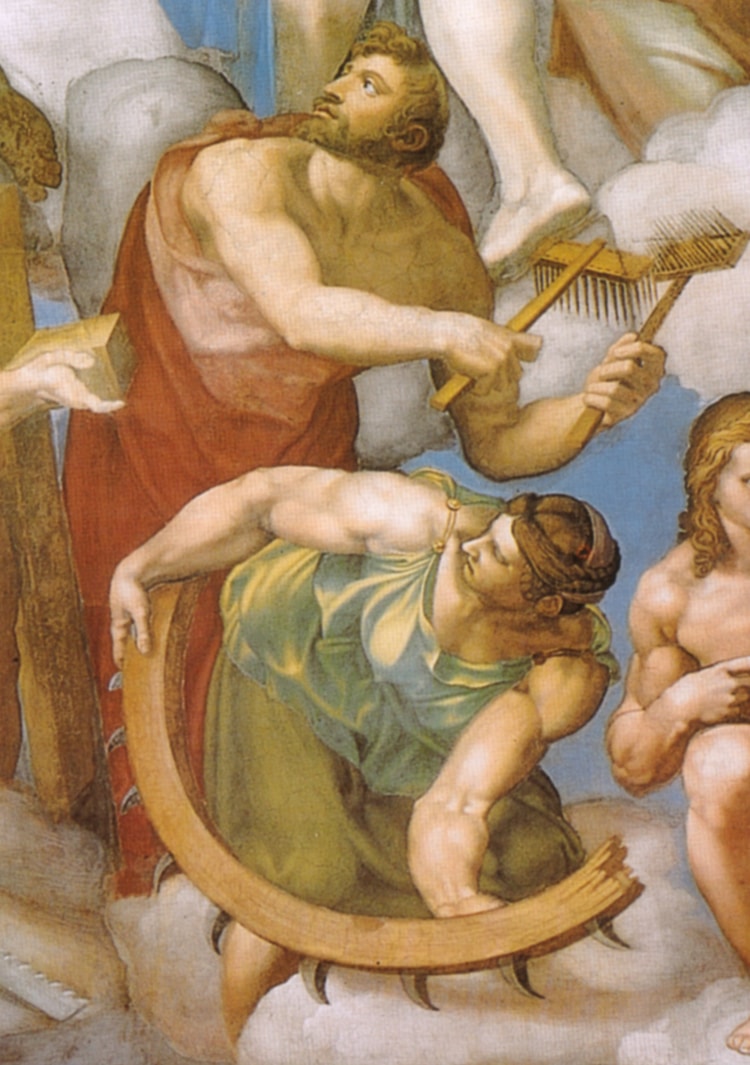 St. Catherine and St. Blaise after being repainted with clothes. (Photo: Wikipedia)

This meant that most likely after Michelangelo’s death, a painter went in and covered up visible genitalia with drapery. The work went on in stages, as the chapel needed to be used for official business at different points. Each intervention was, unfortunately, more aggressive than the last. In total, about 40 figures had drapery added and two figures were completely redone. Luckily, since the modifications were done in dry fresco, they were easier to remove.

In fact, when the Sistine Chapel was restored in the 1990s, 15 coverings added after 1600 were removed. It was decided that the 16th-century modification should stay in place to help tell the history of the artwork.

Today, art critics have been kinder to The Last Judgment. While some still balk at the bulky depiction of anatomy and clustering of figures, overall the work is still considered a masterpiece.