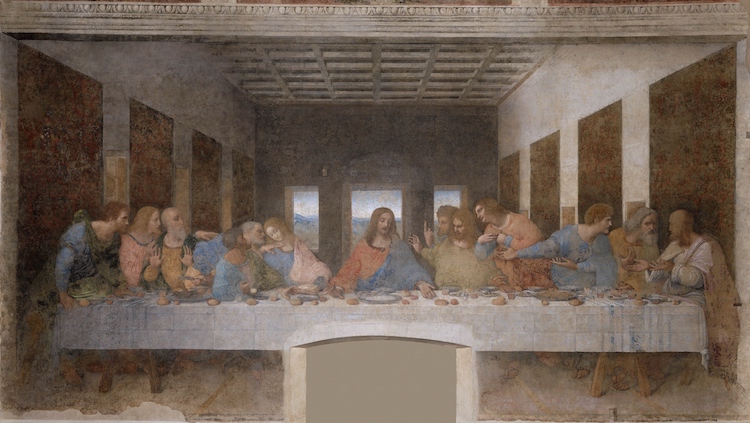 Leonardo da Vinci, “The Last Supper,” 1498 (Photo: Haltadefinizione via Wikimedia Commons Public Domain)
This post may contain affiliate links. If you make a purchase, My Modern Met may earn an affiliate commission. Please read our disclosure for more info.

During the Renaissance, “Old Master” Leonardo da Vinci produced an unprecedented amount of work. Among his famously eclectic—and seemingly endless—portfolio, there are three creations that stand out from the rest: the Mona Lisa (a painted portrait), the Vitruvian Man (a scientific drawing), and The Last Supper (a biblical fresco).

Since its completion in the end of the 15th century, The Last Supper has captivated audiences with its impressively large scale, unique composition, and mysterious subject matter. Here, we take a look at this world-famous work of art, exploring its history and unpacking the characteristics that have come to define it.

In 1495, Leonardo da Vinci was commissioned by Ludovico Sforza—the Duke of Milan and a longtime patron of the artist—to paint a 15 by 29-foot mural for the Dominican convent of Santa Maria delle Grazie in Milan as a part of a renovation project. 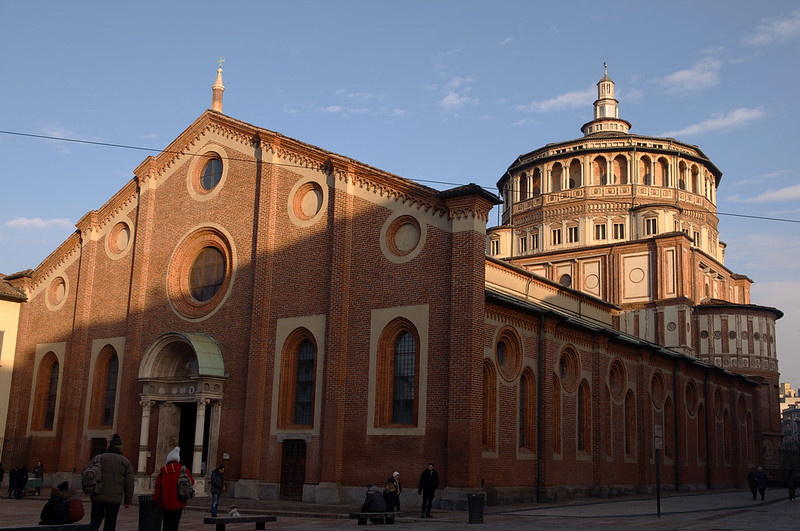 Specifically, Sforza asked Leonardo to depict Jesus' final meal as described in the Gospel of John in the New Testament of the bible. Like other depictions of this well-known event, Leonardo presented Jesus and his 12 apostles at a table celebrating Passover, a traditional Jewish holiday. Unlike similar works, however, Leonardo opted to illustrate the moment Jesus tells his followers that one of them will betray him, placing much of the painting's focus on the figures' individual expressive reactions.

“Leonardo imagined, and has succeeded in expressing, the desire that has entered the minds of the apostles to know who is betraying their Master,” writer and historian Georgio Vasari wrote in the Lives of the Artists. “So in the face of each one may be seen love, fear, indignation, or grief at not being able to understand the meaning of Christ; and this excites no less astonishment than the obstinate hatred and treachery to be seen in Judas.” 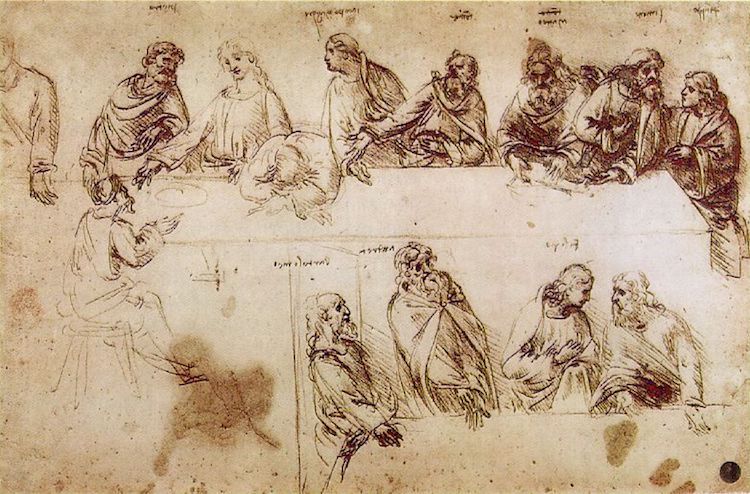 A study for “The Last Supper” from Leonardo's notebooks, ca. 1495-1497 (Photo: the Artchive via Wikimedia Commons Public Domain)

Leonardo organized the apostles into groups of three, a number representative of the holy trinity. 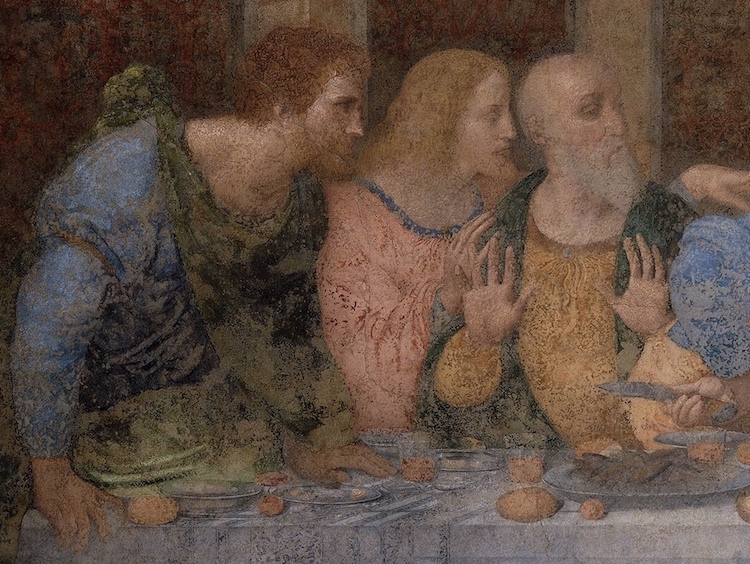 In the second group, Peter (5) appears angry, John (6) looks away in despair, and Judas (4)—the apostle in question—appears shocked that Jesus (7) has discovered his plan. 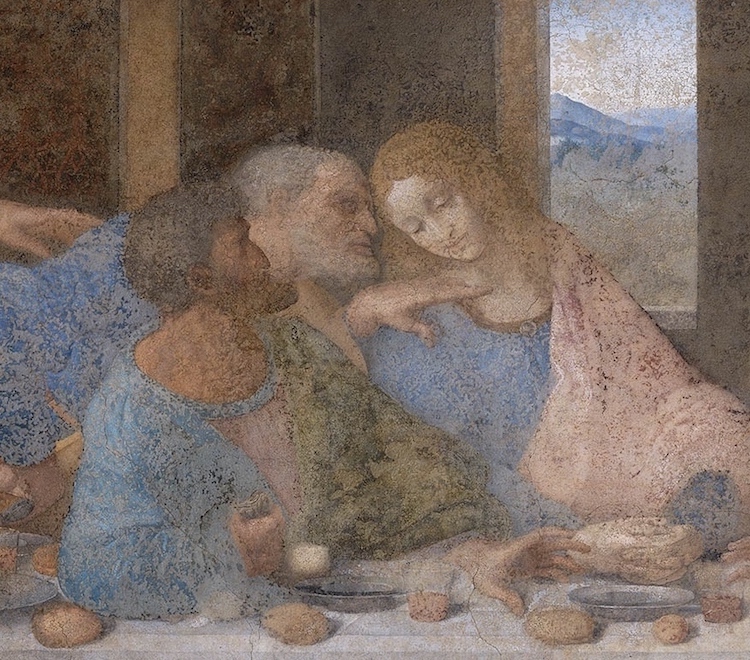 The next group features Thomas (8), James the Greater (9), and Philip (10), who look at their teacher in disbelief. 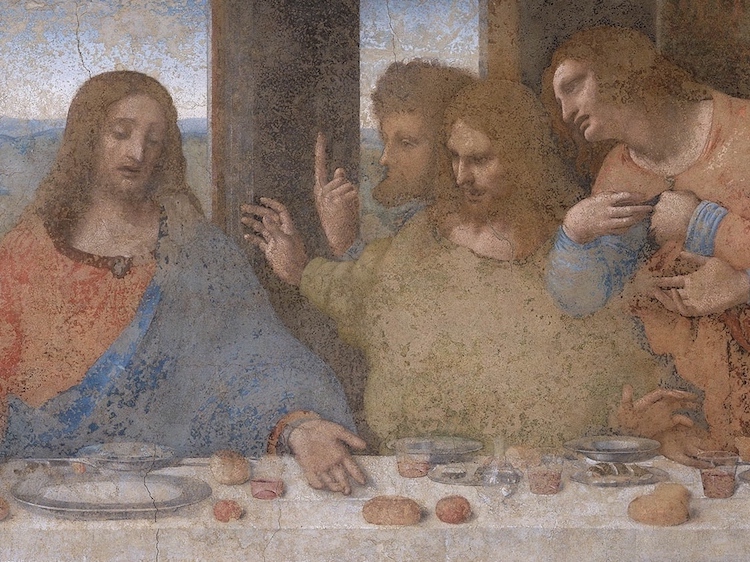 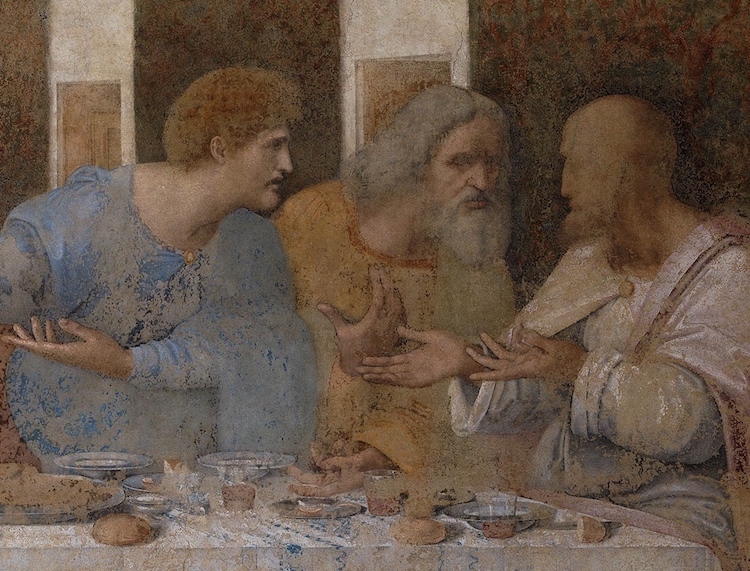