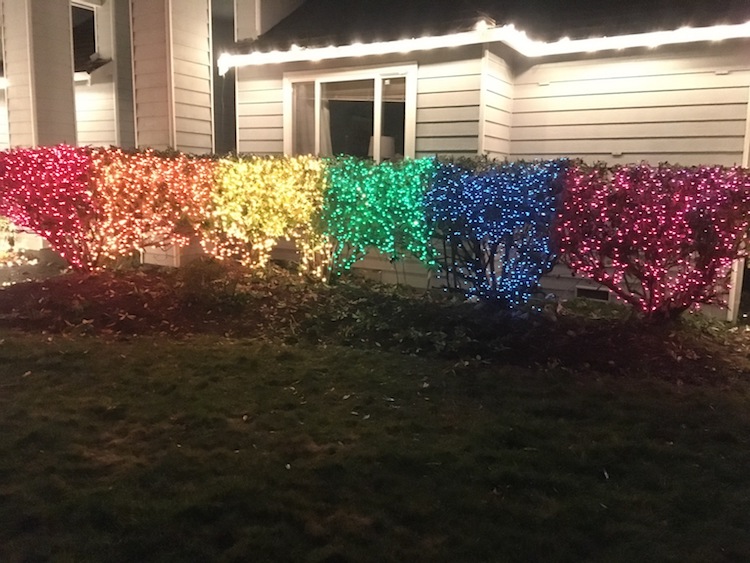 We’ve all seen the house that goes crazy with their holiday lights display—you might even know someone who does. Lexi Magnusson is one who enjoys decorating with a “ridiculous amount of lights” every Christmas. This year, her illumination is a colorful statement of support for the LGBTQ community.

The Seattle-based resident covered her bushes in 10,000 rainbow Christmas lights after a neighbor openly expressed homophobic opinions. Recalling the story to the Huffington Post, Magnusson said, “She’s Mormon and heard that we were, too. My guess is that she thought we were still believers, even though my husband told her we no longer attend.” The neighbor assumed that the couple had the same anti-LGBTQ attitudes as many members of their former religion. “We absolutely do not.” Magnusson said. “It’s why I left the Mormon church.”

While speaking to Magnusson, the neighbor revealed her intolerant views. She started by saying that the family moved to Washington to “protect her children.” On Reddit, Magnusson explained, “Thinking that we were allies, she went on to tell us how horrified she was when her son got turned down for prom because the girl was already planning on going with her girlfriend.” In addition, the school organized an assembly on transgender acceptance. This was the final straw for the family. Ultimately, Magnusson said, “She wanted to get her children away from that sort of influence and people making that ‘lifestyle’ OK.”

As an ally for equality, this conversation enraged Magnusson. But, she kept her cool. “I responded only with, ‘Your kids are going to be exposed to this no matter where you take them. Kids these days get it. They know not to be horrible to other kids based on how they were born.’ ”

After the US presidential election, Magnusson realized just how many people share her neighbor’s views. To show her solidarity with the LGBTQ community—and make a statement to her neighbor—she gathered a copious number of lights. “I felt good the entire time I put them up,” she says. “I sent a text to my cousin who loves Christmas lights like I do, and who is also gay. His approval was everything.”

Magnusson intends to put up more white lights to make the rainbow shine even brighter.

Like creative ways to show support? Share
Like My Modern Met on Facebook
Get Our Weekly Newsletter
Become a
My Modern Met Member
As a member, you'll join us in our effort to support the arts.
Become a Member
Explore member benefits