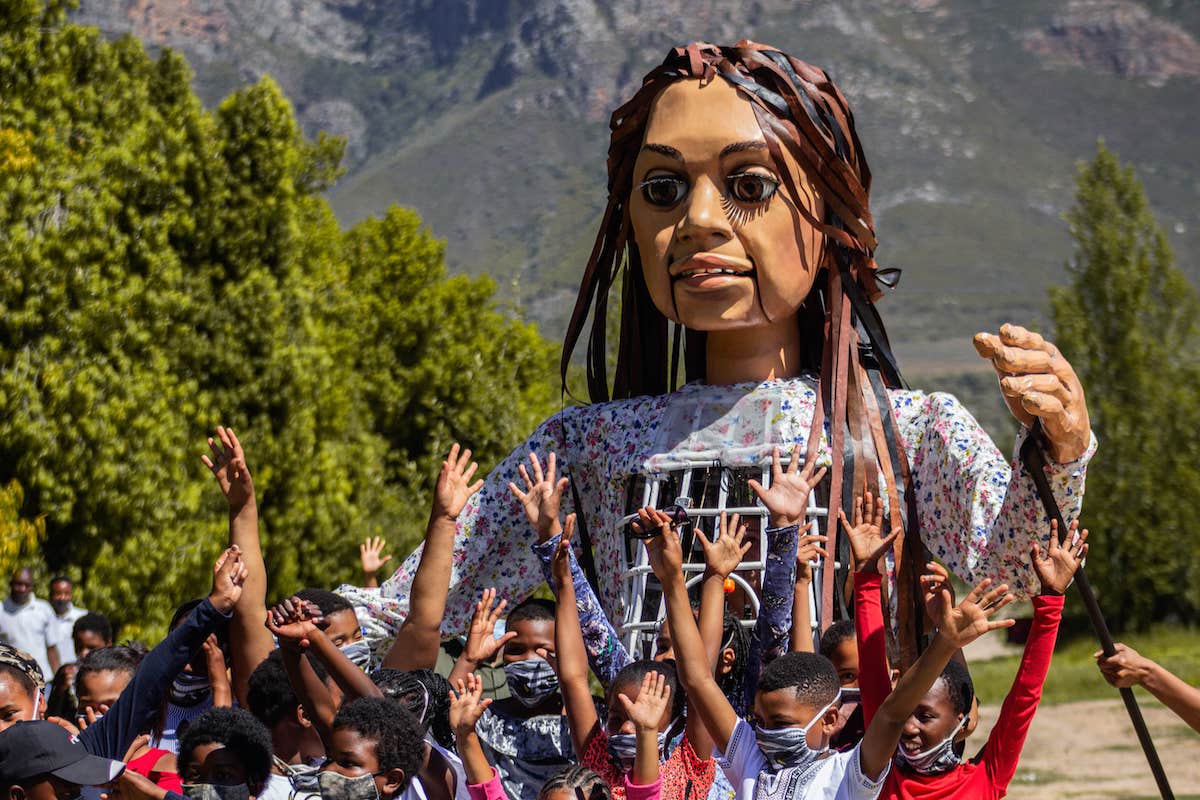 From April to July of 2021, an 11.5-foot-tall puppet named Little Amal will make her way from the Syria-Turkey border to the UK, following the path of many refugees. Nine-year-old Amal is in search of her mother and makes the harrowing 4,970-mile journey alone. This is the story told by Good Chance Theatre who, in collaboration with the Handspring Puppet Company, has brought Amal to life in order to shine a light on the international refugee crisis.

Along her journey, in a performance titled The Walk, Little Amal will make stops in over 70 cities, towns, and villages. She'll be welcomed with art, from major street parades and city-wide performances of music, dance, and theater, to intimate community events. Her journey serves as a reminder for the public not to forget about the millions of displaced refugee children separated from their families.

In this follow up to The Jungle, which had a successful run at London's Young Vic theater, Good Chance Theatre is coordinating its biggest project ever. By working with international non-profits and grassroots organizations, as well as generous support from the public, they're pulling together an incredible journey that is sure to make an impact.

“Little Amal’s story transcends borders and language to highlight the challenges that refugee children face, challenges that are even more pressing during this pandemic,” shares The Walk producer Stephen Daldry. “But she is also a figure of great hope. At times like these, we need art more than we ever have, so I very much look forward to thousands of people across the world being able to follow Little Amal’s dramatic journey across Europe in search of her mother.”

My Modern Met had a chance to speak with Good Chance Theatre Executive Director Naomi Webb about what it's like to take on such a big project and why it's needed now, more than ever. Read on for our exclusive interview. 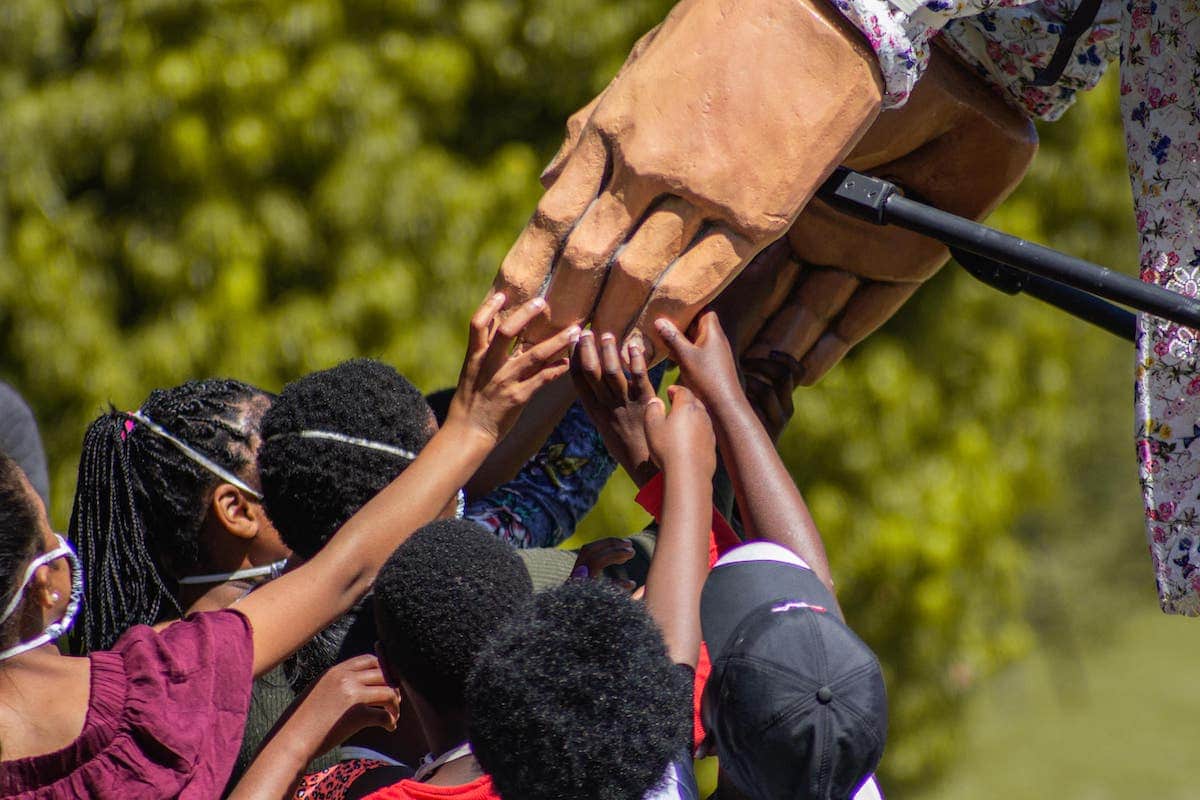 Can you tell us about how Good Chance started and what the “Theatre of Hope” is?

Good Chance began in the Calais refugee camp in 2015 when playwrights Joe Murphy and Joe Robertson went to see for themselves what they were reading so much about in the news. The two Joes intended to stop off but ended up staying in the camp for seven months, where they founded Good Chance and we built our first-ever “Theatre of Hope”—a giant geodesic dome tent that acted as a theater and public art space for people living in the camp.

After the camp was demolished, we created the play The Jungle alongside many of the people we met in Calais, who were by then in the UK, to shine a light on the humans behind the headlines of the refugee crisis and start a global conversation around immigration. We have continued to create productions that tell big stories of hope and humanity, build dome theaters across the world working with refugees and local people, and collaborate with artists from refugee and migrant backgrounds to create visionary new art. 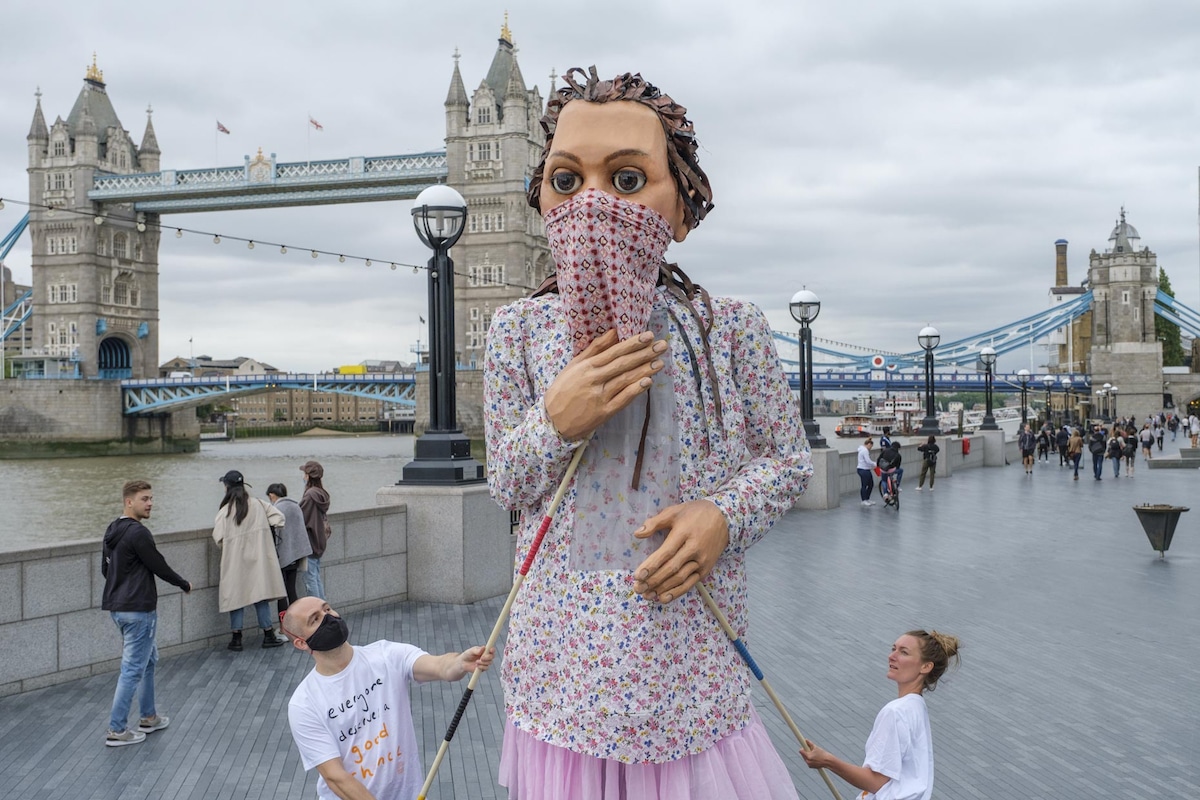 Why do you feel it's important to use the arts to help put a focus on the refugee crisis?

We live in a world of increasing political division and polarized opinion, where rhetoric around refugees is often weaponized and used to further divide people. But art has the power to unite us. It’s a secret weapon to have a different kind of conversation and it affirms our shared humanity regardless of our perceived differences. Art can also give a voice and a platform to marginalized and vulnerable people by positively representing their stories rather than reducing them to ones of fear or pity. The Walk is a celebration of migration and cultural diversity that will tell the story of the contributions made by refugees and immigrants. It represents the refugee story as one of potential, success, respect, hospitality, and kindness. 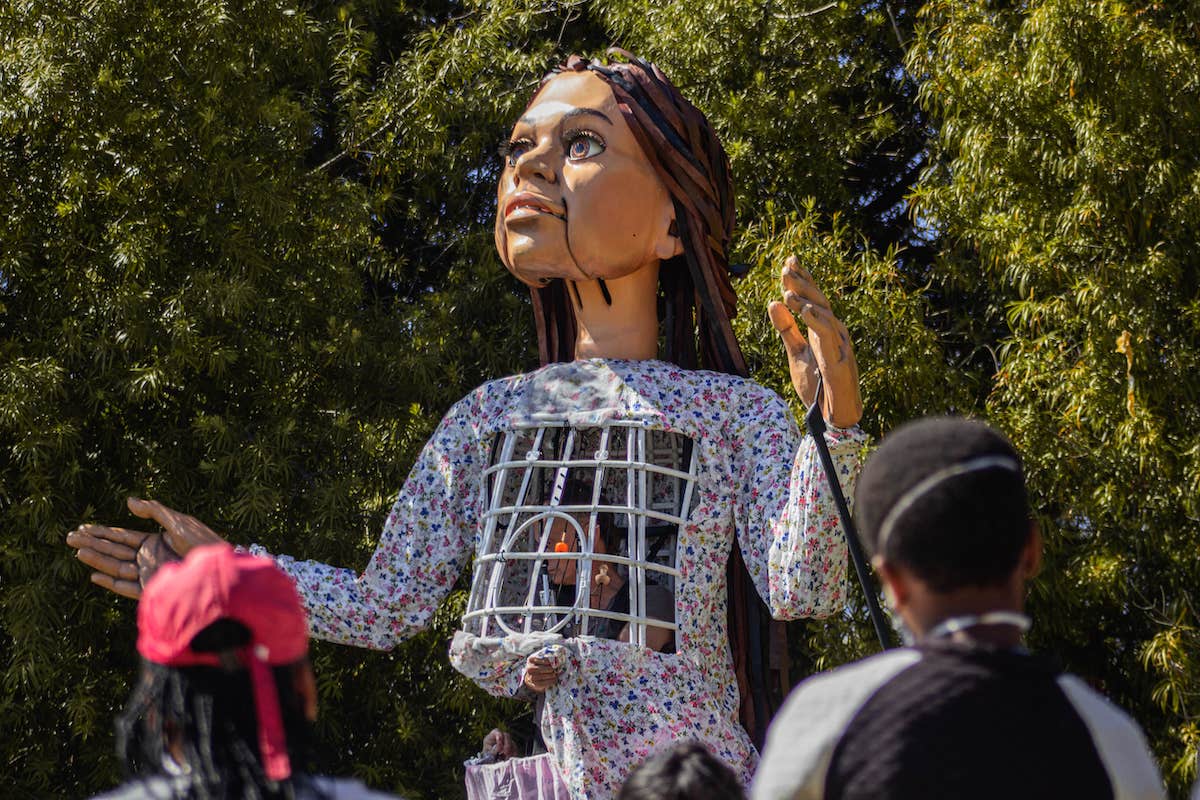 How did the concept for The Walk come about?

The genesis of The Walk began in the Good Chance theater production of The Jungle. The play was based on the experiences Joe and Joe had in the 2015 Calais refugee camp and the very many different people they met.

“Little Amal” was a character in the play—a young Syrian refugee who represented the hundreds of unaccompanied minors in the Calais camp. Following the success of The Jungle, we felt Little Amal’s story still had so much more to say. The Walk was born out of the idea to tell the story of her journey, and that of millions like her, to focus attention on the urgent needs of young refugees, and to highlight their potential. 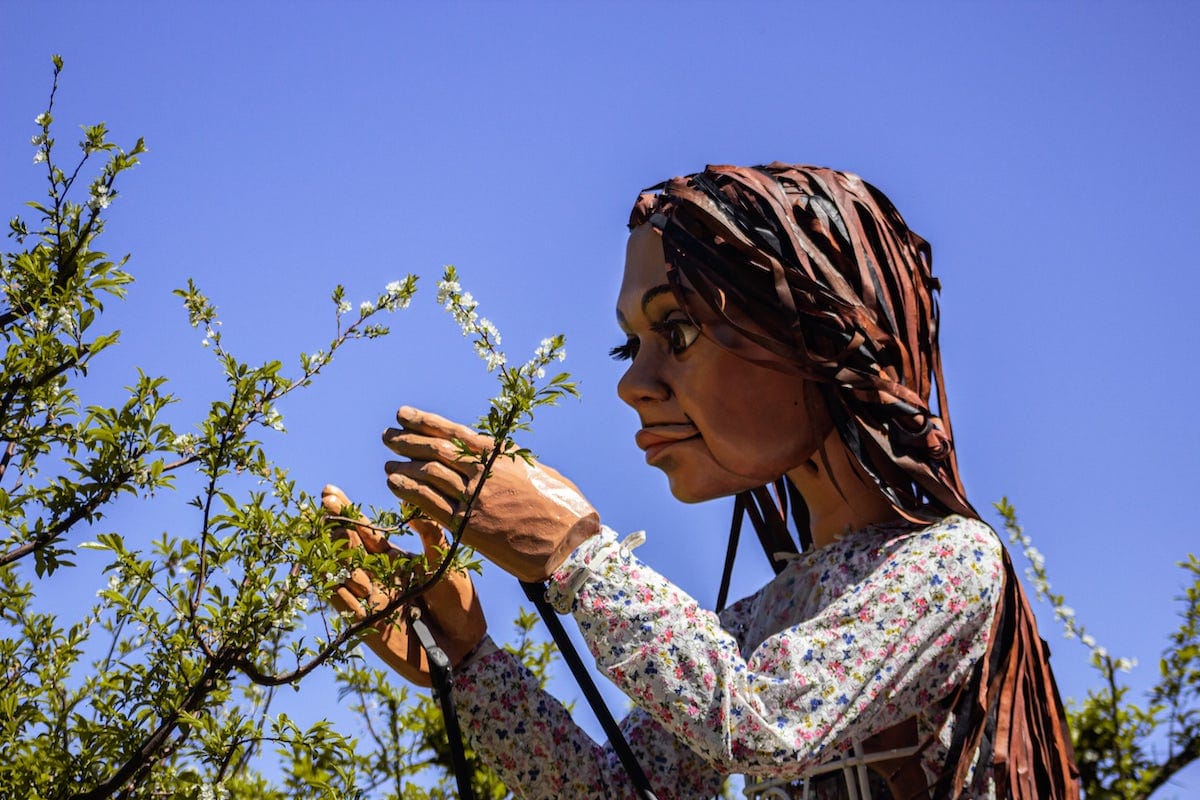 What does Little Amal represent?

We knew we wanted to tell the story of a young refugee, but Little Amal represents all refugees–there are almost 80 million displaced people worldwide, and almost half of those are children. We wanted her to be an emblem for all the children who need our support more than ever following the impact of the pandemic. And, in a world of constant distractions, we needed Little Amal to be able to harness attention.

She represents a big story and a huge hope, so we made her a giant puppet that you can’t miss. We worked with the geniuses at Handspring Puppet Company to create a puppet that was lo-fi enough to be able to withstand such a long journey, but life-like enough to create meaningful connections with those who encounter her. The incredible thing about puppets is that audiences instinctively apply something of their own humanity to them, so they are brilliant tools to help generate empathy and shared emotional experiences. 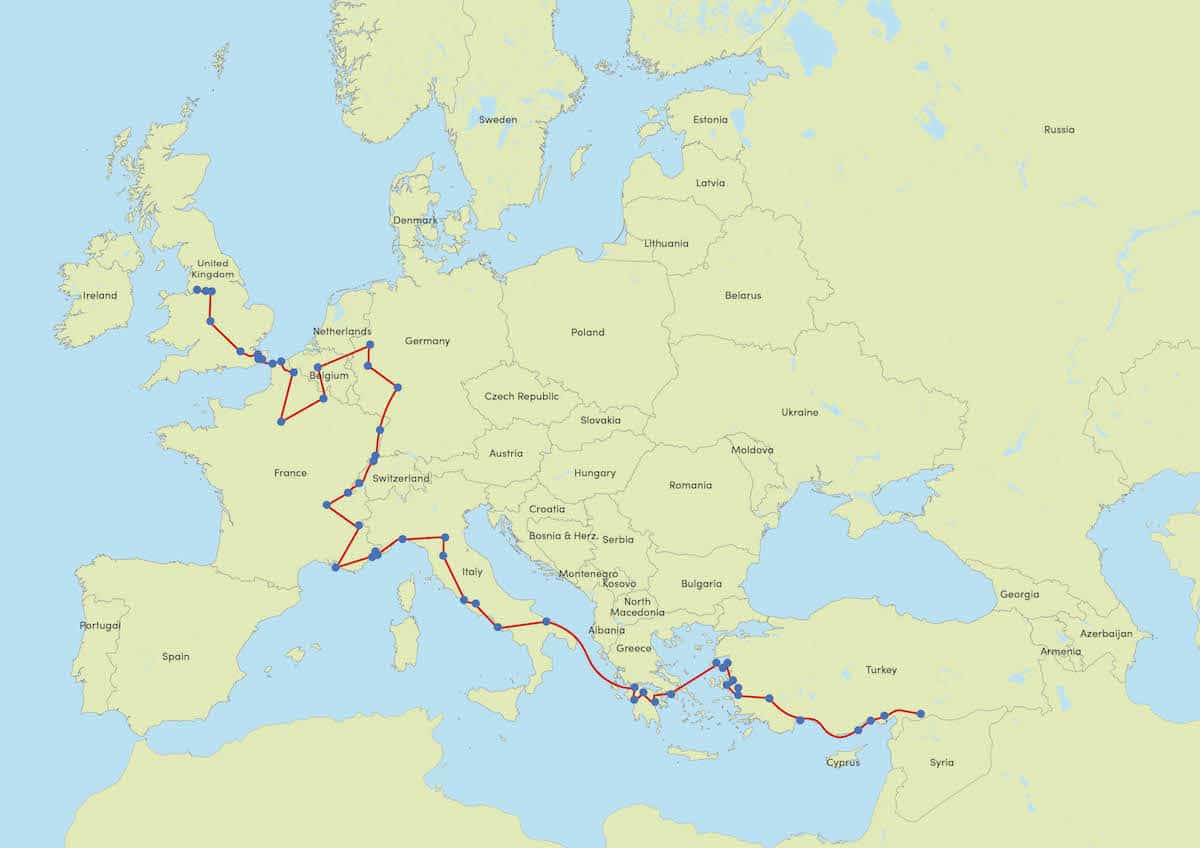 How was the route selected?

The route is one example of a journey people may make, following a similar path that many refugees have taken and continue to take through Turkey and Europe. It was important to us that the hundreds of cultural “Events of Welcome” that will greet Little Amal along her route are designed by and for local communities with migrant and refugee populations. We know that the story of people seeking refuge is not just that of the individual, it is also a story about the communities that receive them. By working with cultural, civic, and humanitarian partners throughout Turkey and Europe we were able to find places along the route for Little Amal to visit that could create meaningful cultural events and community activities to welcome her. 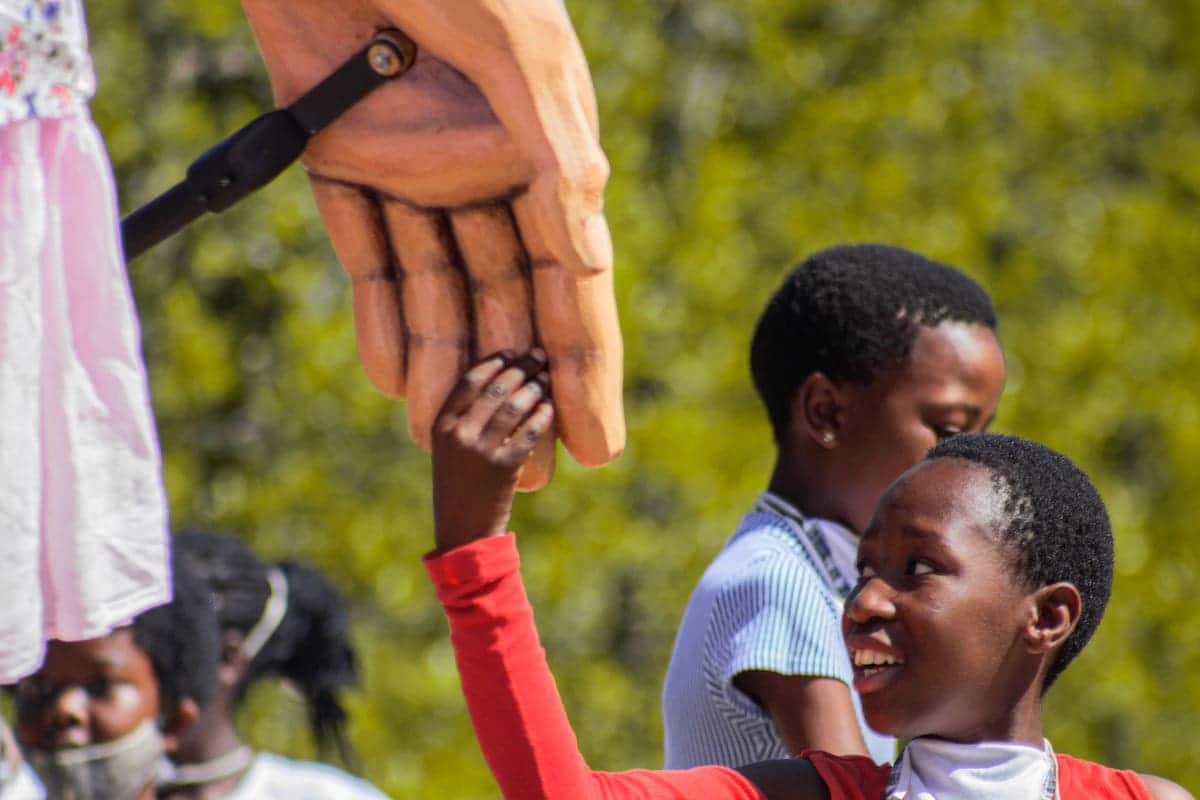 The project is quite ambitious. Can you give an idea of what goes into the production and how many people are involved in making this work?

The Walk is by far our most ambitious endeavor yet. We are working with an experienced team of international producers from the worlds of film, theater, festivals, and events in order to create Little Amal’s epic odyssey. Good Chance is producing The Walk with Stephen Daldry, David Lan, and Tracey Seaward, in association with Handspring Puppet Company, as well as a team of producers throughout Turkey and Europe.

And we are all working together with hundreds of cultural, humanitarian, and civic partners across the route—from local grassroots community groups to major cultural organizations and local government. There are too many people to count all collaborating to make this happen—not to mention the generosity of members of the public, whose donations and support we still desperately need to create The Walk. 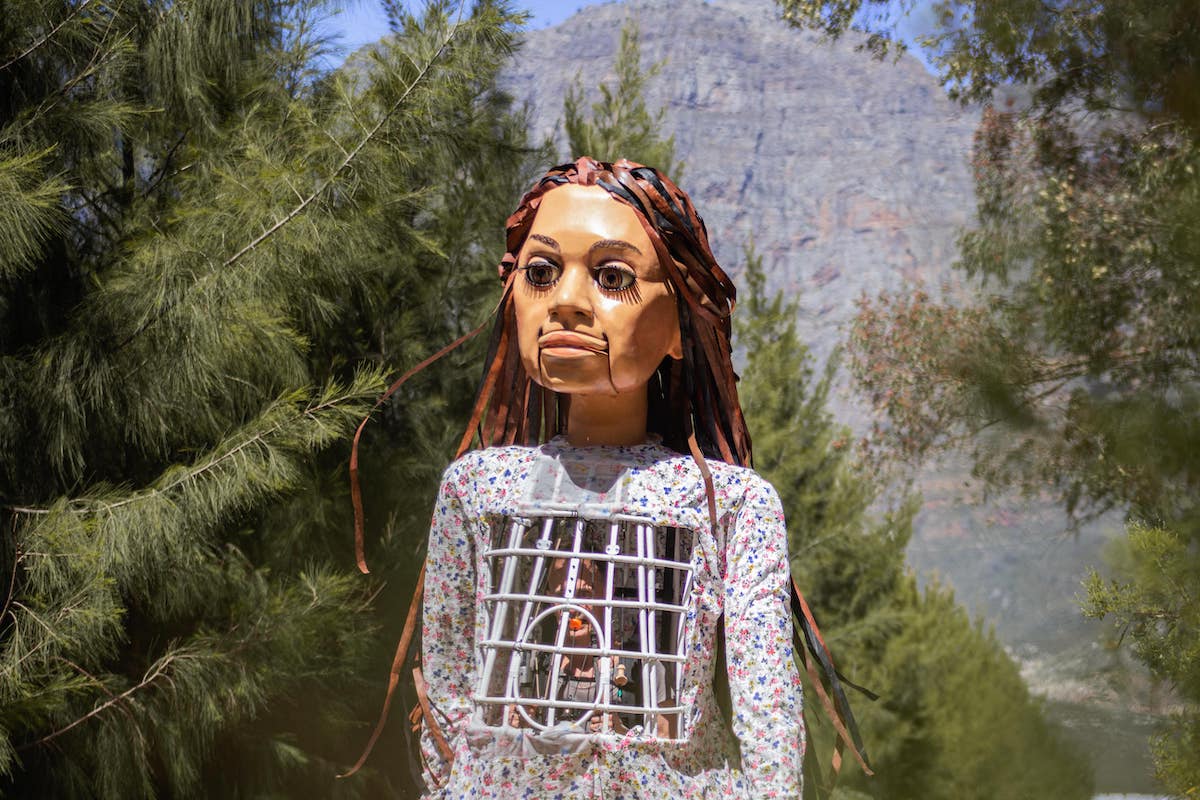 What message do you hope to spread through The Walk?

Amal is carrying a simple message of hope for the refugee children she represents: “Don’t forget about us.” Recently many of us have been forced to experience isolation from loved ones and disruption of our daily routines, but for refugees, devastating isolation and disruption can be a permanent reality. The Walk aims to refocus attention on the urgent needs of young refugees—especially with regards to improving access to education—but we also want to leave a legacy of a network of “Friends of Amal” by creating lasting connections between the people and communities she encounters across the whole route. 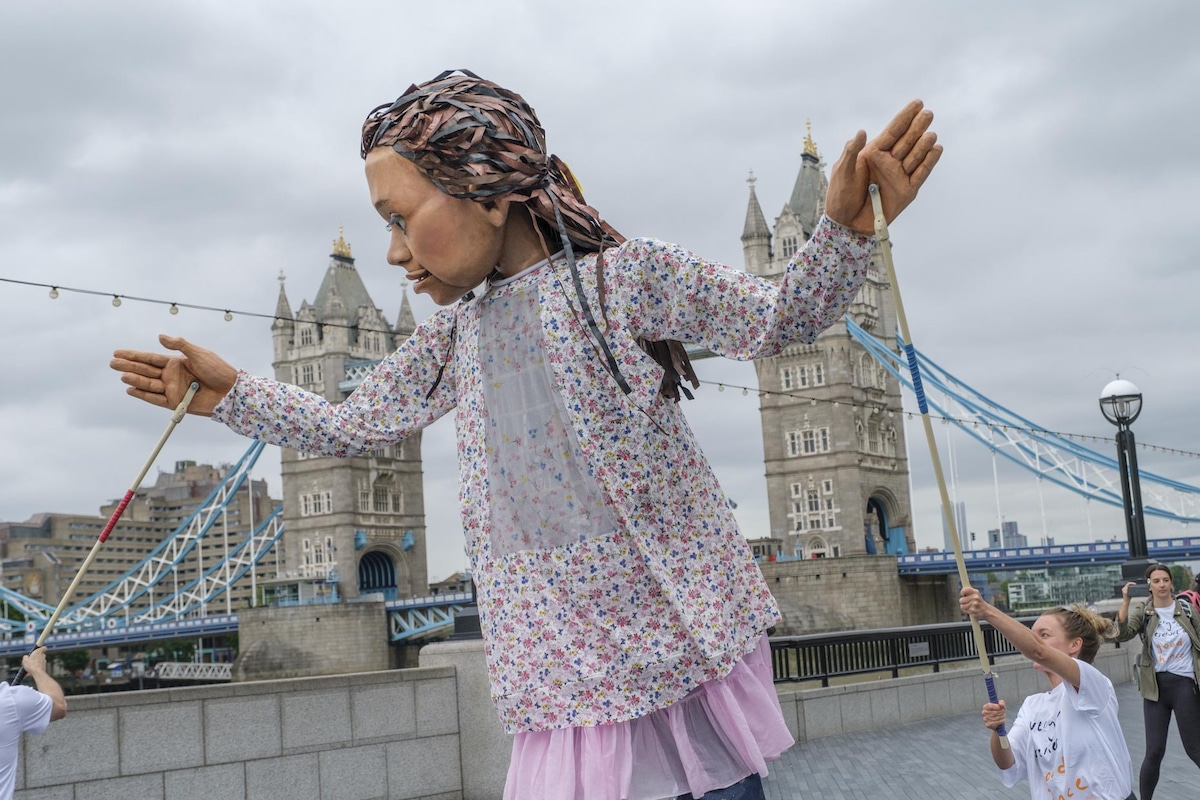 How do you hope that the project can change people's perceptions of refugees, which are often formed only by what they see on the news?

What we see in the news often reduces refugees to one-dimensional characters in a tragic story. Or it demonizes them as threats to our way of life. This makes it easy for us to dehumanize people seeking refuge, and that in turn helps us to ignore this situation across the world.

The Walk aspires to elevate the refugee story from one of solely tragedy, pity, and fear, to one of shared humanity and opportunity. If we can change even a few minds and help more people to view refugees as fellow humans who are not simply defined by the set of circumstances that led them to leave their home, that would be a success in my eyes. We want Little Amal to inspire us to think big and to act bigger.

How can people view The Walk in person or from a distance?

Everywhere Amal goes, there will be free outdoor public art events which local communities will be invited to attend, open to everyone. We will also be documenting and sharing as much of Amal’s journey as possible online. Global audiences can follow @walkwithamal on social media and visit walkwithamal.org for updates and all the latest news about the program as it is announced.

Moved by the message of this performance? Share
Like My Modern Met on Facebook
Get Our Weekly Newsletter
Become a
My Modern Met Member
As a member, you'll join us in our effort to support the arts.
Become a Member
Explore member benefits 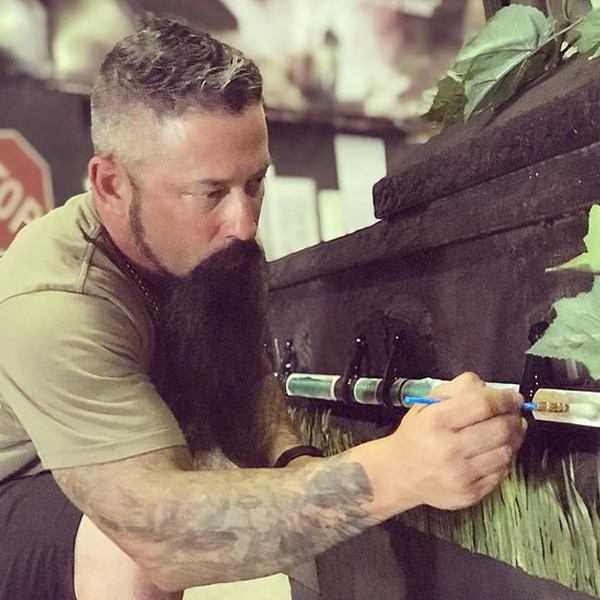 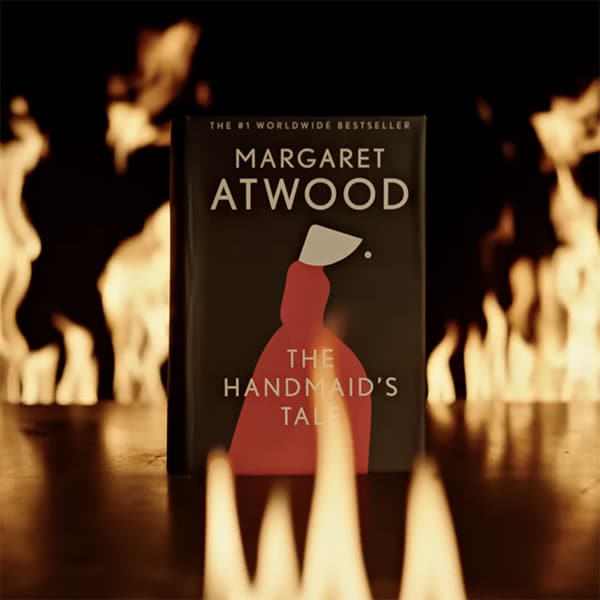 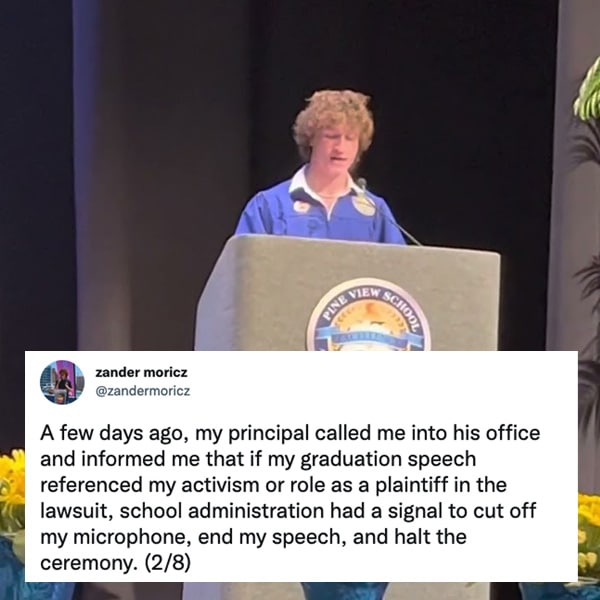