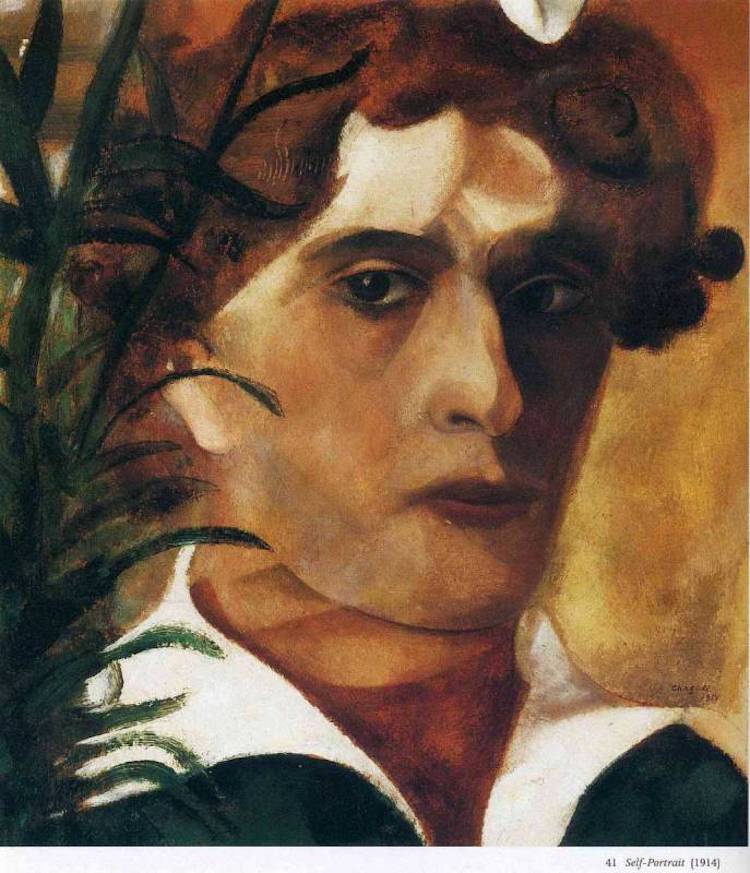 The late French-Russian artist Marc Chagall is known for his distinct abstract style that merged Cubism, Fauvism, and Surrealism. Throughout his long career, he created dream-like figurative and narrative art that explored his Jewish identity and life in Russia. He once said, “Lenin turned [the country] upside down, just as I upturn my paintings.”

Chagall said of his childhood, “Lines, angles, triangles, squares, carried me far away to enchanting horizons.” And as a young artist in Paris, he used those geometric angles to create alluring compositions that capture his childhood memories. In his later works, Chagall explores love, religion, and world peace through painting and even stained-glass art. Read one to discover five of his most famous works.

Chagall painted I and the Village the year after he moved from Russia to Paris. There, he joined a community of international artists known as La Ruche (The Beehive) who lived in a settlement on the outskirts of the Montparnasse district of Paris. No single style dominated the group and plenty of experimentation was encouraged. During this time, Chagall was influenced by Cubism—but unlike the work of Picasso—the Russian artist is more playful with his compositions.

I and the Village is a reflection of Chagall's dreams and childhood memories of Russia. The painting features the Russian landscape and symbols from folklore stories. At the top of the composition, Chagall's hometown—with a church, a series of houses, and two people—is rendered in vibrant hues. The woman and some of the houses in the village are upside down, emphasizing the surreal, dreamlike quality of the work. Below that, the faces of a man (who is believed to be Chagall himself) and a lamb that meet in the middle of the canvas. Their pupils are connected by a faint white line as if it’s a piece of thread. The painting also features a milkmaid layered atop the head of a lamb—a common motif in Chagall’s work.

Paris Through the Window, 1913

“Paris!” Chagall wrote in his autobiography. “No word sounded sweeter to me!” The artist’s painting titled Paris Through the Window is an enlarged version of a window view in a self-portrait painted one year earlier. It features a colorful cityscape and a portrait of the Eiffel Tower rendered in a style often referred to as Orphic Cubism. The term was coined by the French poet Guillaume Apollinaire in 1912 and was used to describe art that focused on pure abstraction and bright colors.

Chagall's vibrant image explores his feeling of division as well as past and present. Illustrated with a double-faced man in the corner of the painting, Chagall was torn between his love of Paris and his old life back in Russia. The couple below the Eiffel Tower—depicted splitting apart in mid-air—also seem to symbolize this theme. Chagall's parachutist might also refer to modern experiences during that time since the first successful jump occurred in 1912. 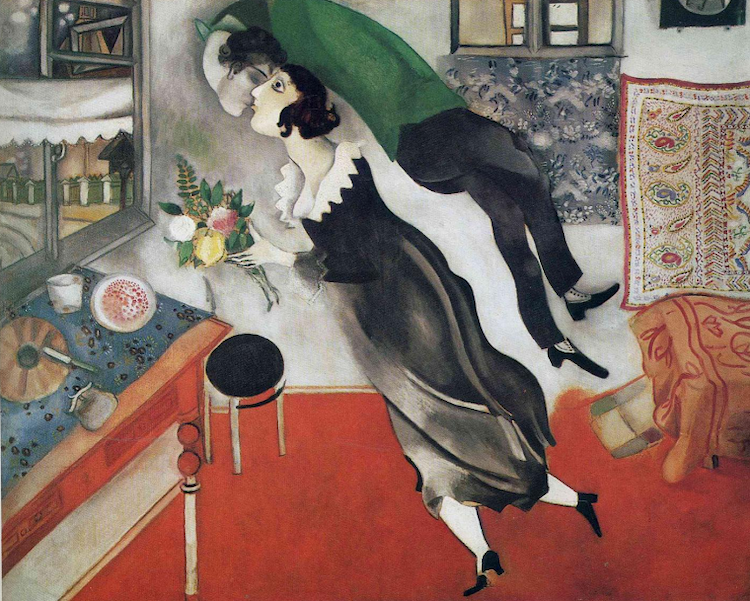 Chagall often said “love” was the main color of his paintings. The Birthday, painted in 1915, celebrates the love he had for his wife, Bella. The artwork was produced just weeks before the pair were married. Expressing the euphoric love these two shared, Chagall paints himself as floating above Bella in a flowing, dream-like manner. His head is craned upside down and backward as he twists around to kiss his future wife. Bella also floats off the ground while holding a bouquet of flowers. The two figures are painted in an ordinary, domestic setting, conveying that their love is real and experienced every day at home.

White Crucifixion represents a critical turning point for Chagall. It was the first of a series of paintings that feature the image of Christ as a Jewish martyr, calling attention to the suffering of European Jews during the 1930s. Jesus is depicted on the cross wearing a Jewish prayer shawl. He isn’t the only one in pain though: Jewish figures on all sides of him are illustrated fleeing from devastation. On the left, a village is pillaged and burned, forcing refugees to flee by boat. The three bearded figures below them (one clutches the Torah) escape on foot. On the right, a synagogue goes up in flames, while a mother comforts her child below. By linking the biblical events with the persecution of Jews during WWII, Chagall compares the Nazis to the Romans who tormented and crucified Jesus, according to the biblical tale.

The Window of Peace and Human Happiness, aka Peace Window, 1967 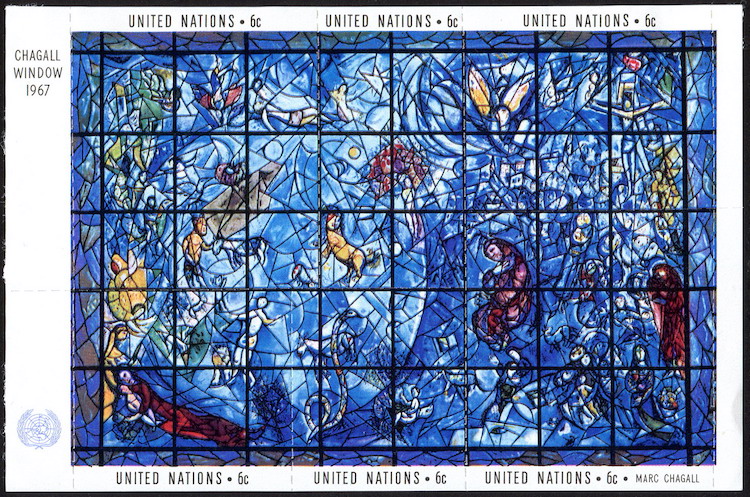 On September 17, 1961, Secretary-General Dag Hammarskjöld of the UN and 15 others died in a plane crash en route to a peace mission. The tragedy sparked the UN staff to set up a committee and a foundation for the purpose of creating a memorial. The foundation chose Chagall to create a free-standing stained-glass piece in memory of those who lost their lives.

Like so many of Chagall’s later stained-glass works, the Peace Window was inspired by passages in the Bible. It features many elements from the Old and the New Testaments, including the tree of knowledge and Jesus’ crucifixion. For Chagall, the window was also a personal thank you to the United States for granting him asylum during WW2 when he was forced to flee Nazi Europe. The huge masterpiece stands at 12 feet (3.7 meters) and 15 feet (4.6 meters) wide at the United Nations in New York.

At the unveiling ceremony, Chagall urged the audience, “not to see the window but to feel it.” He said, “I should like people to be as moved as I was when I was engaged in this work which was done for people of all countries, in the name of peace and love.”