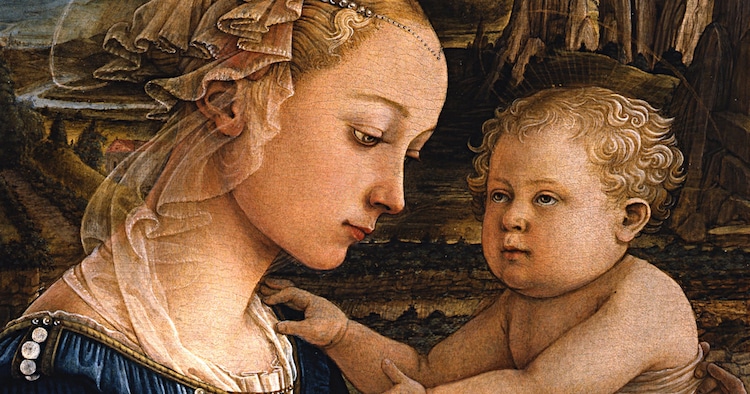 Images of the Madonna and Child—a title that typically denotes a visual representation of the Virgin Mary and her infant son, Jesus—are among painting's most praised motifs. Originally an ancient devotional practice stemming from biblical beliefs, artistically representing these figures has become a central theme in the canon of art history.

Given its longevity, it is no wonder that the tradition has evolved over time, culminating in a host of works that range from divine icons to down-to-earth portrayals. Only by observing the motif's role throughout history is one able to fully grasp its significance—both in Christian art and beyond.

Who were Mary and Jesus? 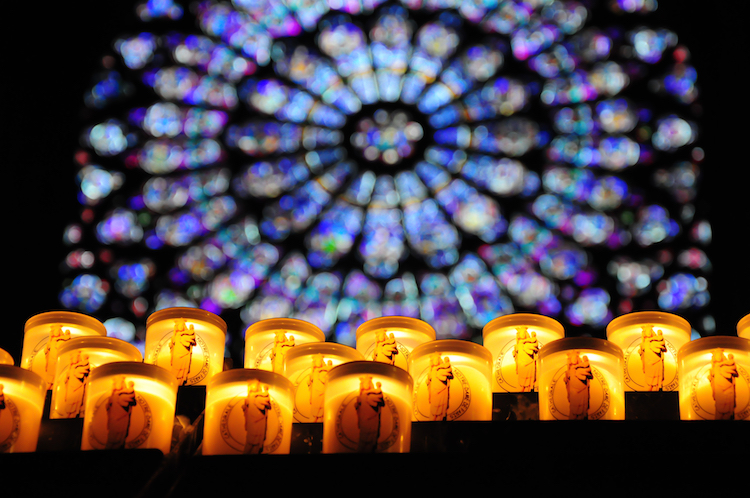 According to Christian belief, Mary—a Galilean Jewish woman from Nazareth—was chosen by God to bear his only son, Jesus. The bible places emphasis on the fact that Mary was a virgin, impregnated not by her betrothed, Joseph, but by the Holy Spirit—a phenomenon that, according to the Gospel of Luke, perplexed even Mary herself.

“How will this happen?” she asked Gabriel, an archangel messenger sent by God to tell her the news. “I’m still a virgin!” The angel replied: “The holy spirit will come upon you . . . and the power of the Most High will overshadow you. For that reason the holy one who is born from you will be called God’s Son.”

Mary agreed to carry, birth, and raise Jesus. Together, the pair is among Christianity's most venerated figures, making their perpetual presence in art no surprise.

General Representations of Madonna in Art 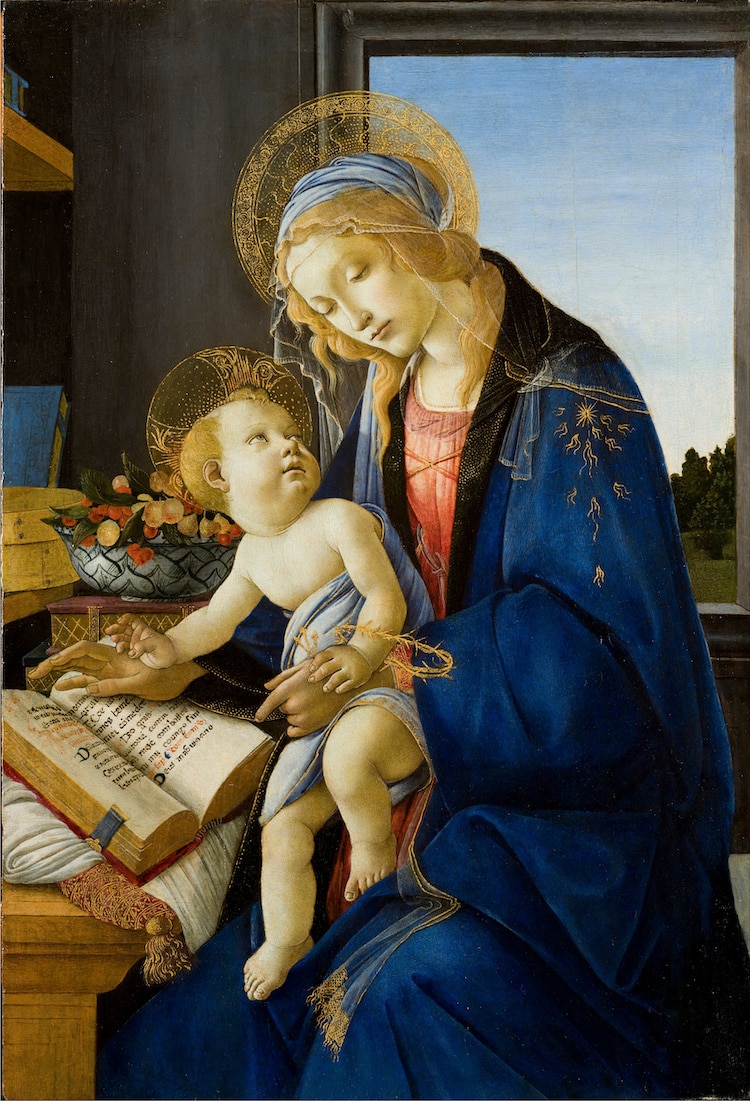 “The Virgin and Child (The Madonna of the Book)” by Sandro Botticelli (Photo: Public domain via Wikimedia Commons)

Throughout art history, Madonna has been depicted in many ways. She is almost always with Jesus, but there are instances in which she is alone—either in prayer, giving a blessing or a gesture of prophecy. Here are other formats:

The Madonna and Child in Art History 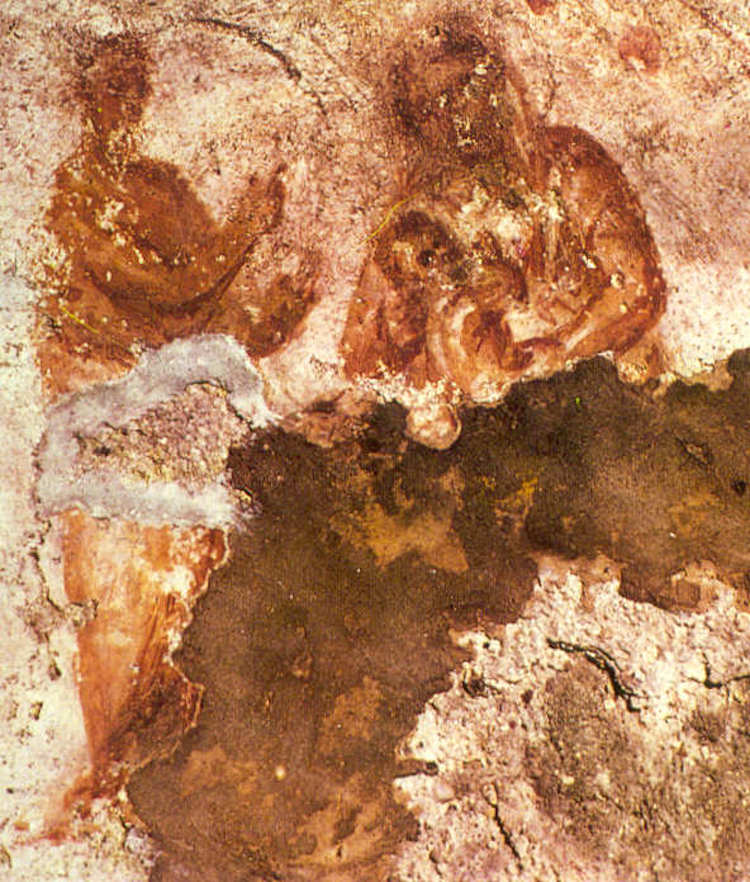 “Virgin and Child with Balaam the Prophet” in the Catacomb of Priscilla in Rome, late 2nd century (Photo: Public domain via Wikimedia Commons)

Like many other trends in art history, the Madonna (derived from the Italian term for Our Lady) and Child tradition can be traced back to the Ancient Roman Empire.

The earliest known visual portrayal of Mary and the infant Jesus can be found in the Catacomb of Priscilla, a quarry used for Christian burials in the late 2nd through 4th centuries. This catacomb is celebrated for its age-old wall and ceiling paintings, including a collection inspired by the bible. On top of tales from the Old Testament, including the Binding of Isaac and the Last Judgment, the frescoes in its Greek Chamber tell stories from the New Testament—including, of course, the birth of Jesus.

The Catacomb of Priscilla also likely features the earliest known portrayal of an angel in art history. Together, these “firsts” make it among Christian art's most significant sites. 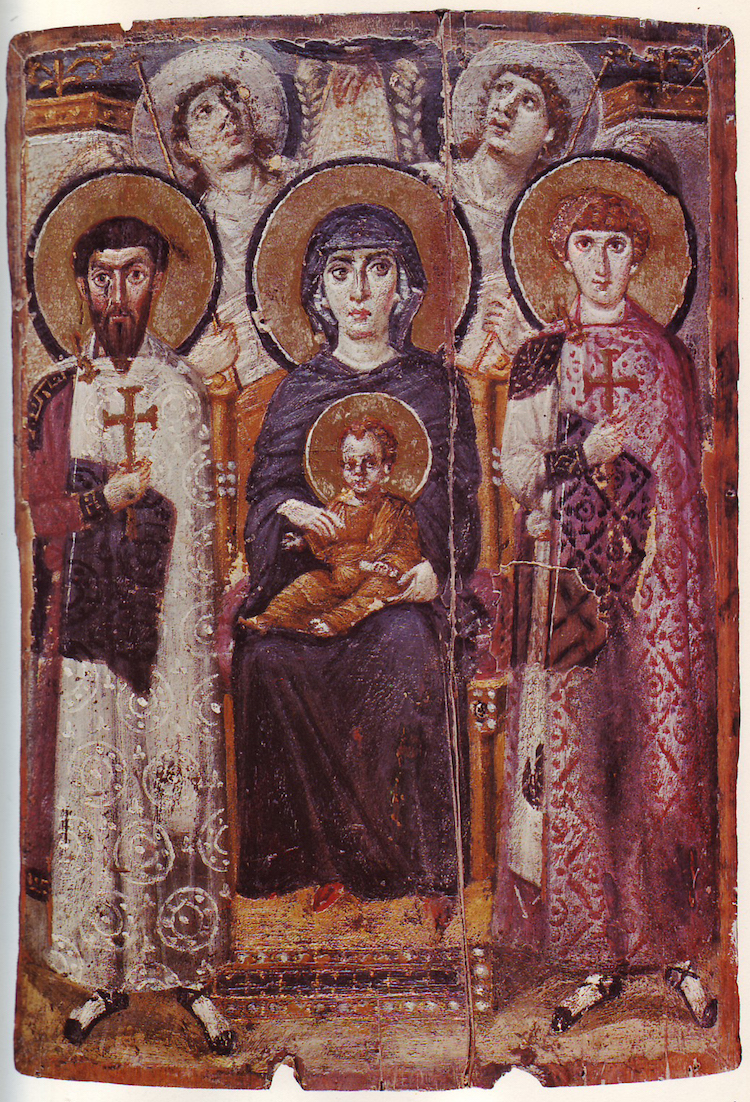 Icon of the enthroned Virgin and Child with saints and angels in Saint Catherine's Monastery, 6th century (Photo: Public domain via Wikimedia Commons)

Following their fresco debut, the Madonna and Child materialized as encaustic (wax-based) and tempera (egg yolk-based) paintings. Rendered on wooden panels, these Roman Catholic icons often feature the somber-faced Mary and Jesus seated on a throne and flanked by equally serious saints and angels. They were predominantly used for worship and are among Byzantine art's most prevalent works. 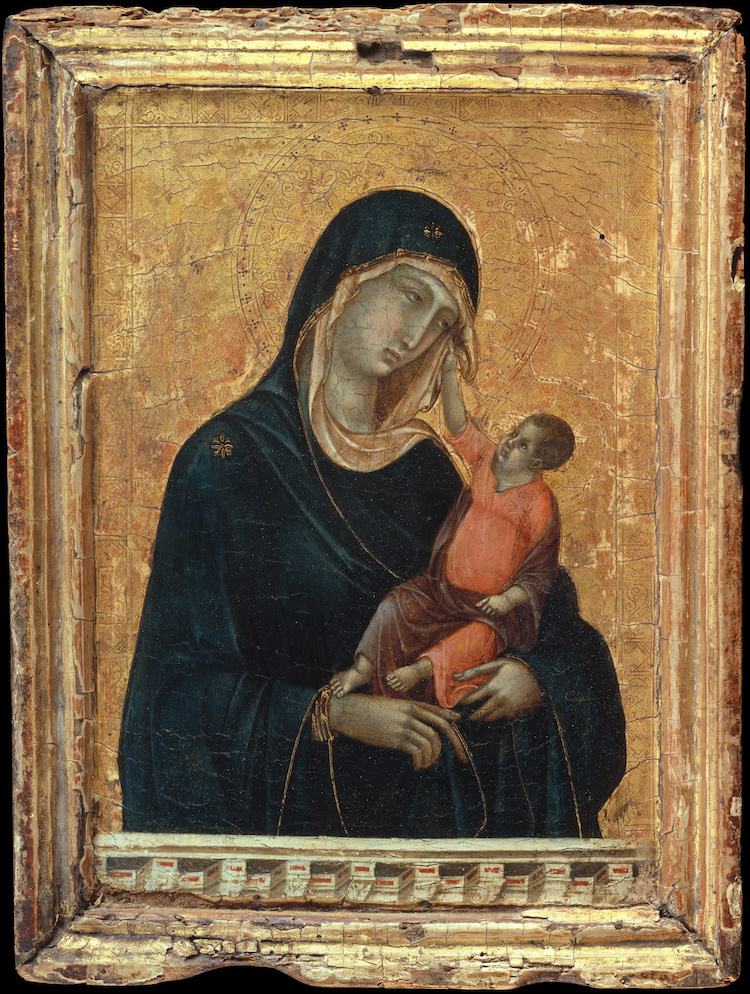 In the Middle Ages, artists adopted the Byzantine icon aesthetic to craft their own style of panel painting. Italian painters like Cimabue and Duccio created tempera portraits of Mary and Jesus that built upon the Byzantine model—especially flat picture planes, seated poses, and the use of gold leaf, a medium whose popularity decreased as the Renaissance inched closer. 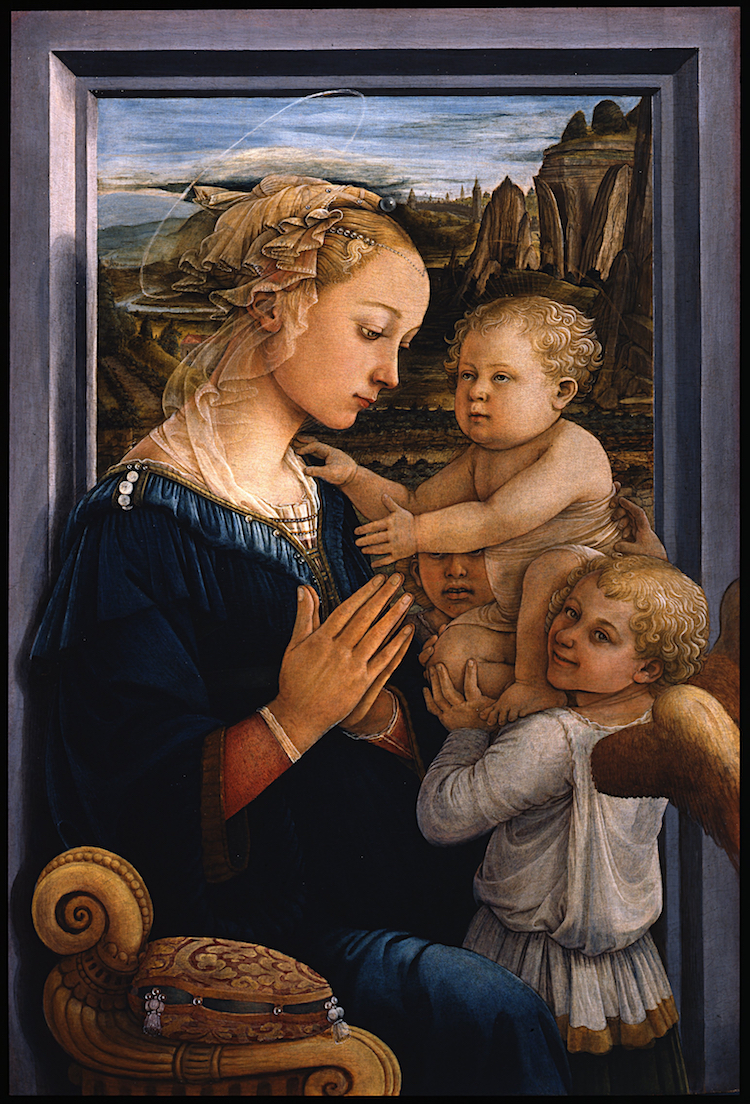 In the 15th century, Italian painters and draftsmen began experimenting with realism in their work. This approach ushered in the Early Renaissance, an enlightened age of art that lasted from 1400 until 1490. During this time, artists looked back to ancient times, culminating in a body of work that evokes Classical interests. While many masterpieces of the period—including Primavera and The Birth of Venus by Botticelli—retained the mythological subject matter favored by Classical artists, some feature naturalistic depictions of Mary (who appeared to adopt more engaged poses) and Jesus (who began to look more baby-like).

Italian ideals gradually made their way across the continent, culminating in a Northern Renaissance. Based in the Low Countries (the Netherlands and Belgium), Germany, France, and England, this movement shares the Italian Renaissance's preference for realistic painting. In their impressions of the Madonna and Child, artists like Jan Van Eyck and Robert Campin took this new approach, resulting in works that showcase an advanced sense of perspective, skilled methods of figure painting, and a radical interest in earthly settings. 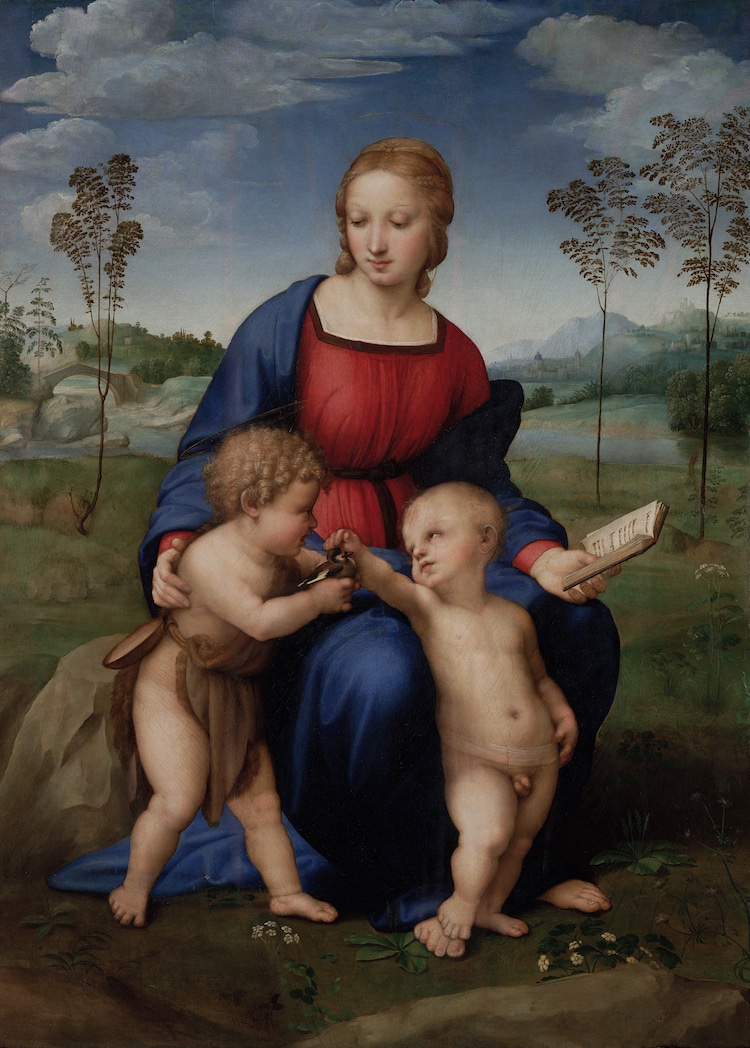 During the High Renaissance (1490 to 1527), Michelangelo, Leonardo da Vinci, Raphael, and other Italian artists took this renewed interest in realism to new heights. No longer interested in mythological motifs, they shifted their focus to commissioned portraiture, lifelike anatomical studies, and biblical figures—including an increasingly personable and naturalistic Madonna and Child. 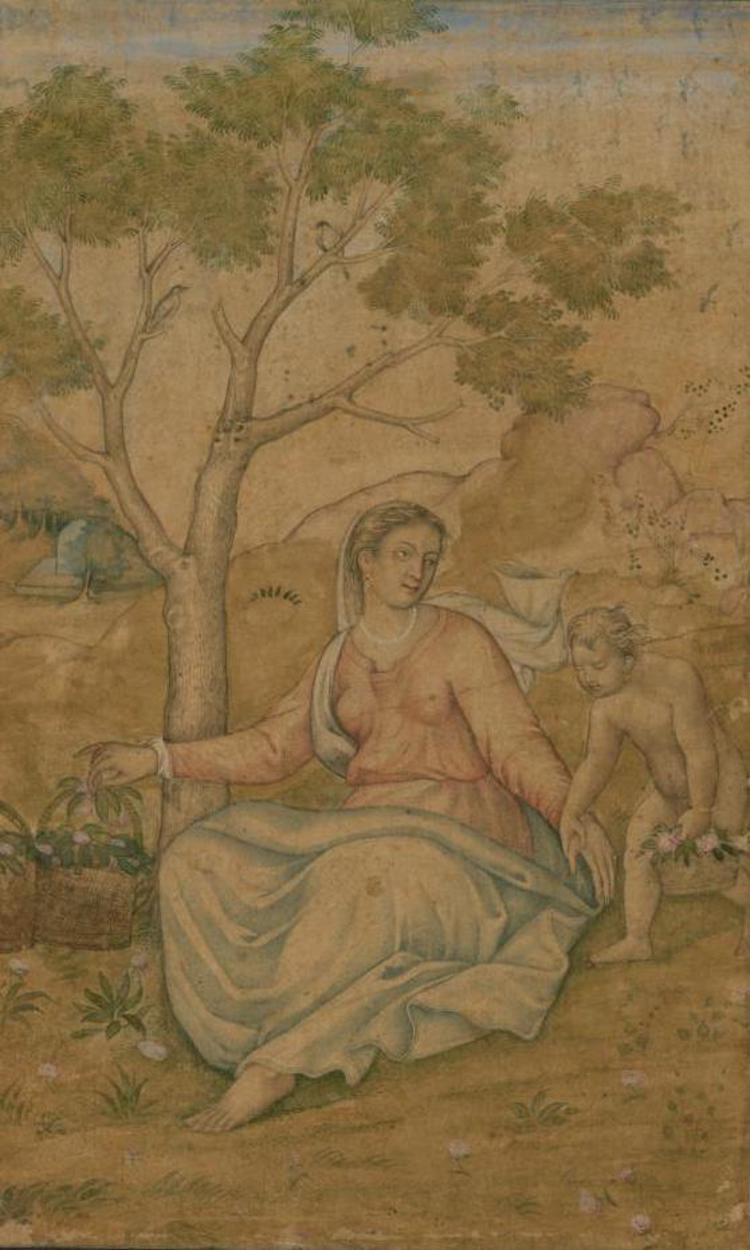 The Madonna and Child did not only appear in Western art; they also served as a muse in Mughal painting. Why would classic Christian figures feature in Indo-Islamic art? According to the Metropolitan Museum of Art, in the 16th century, “numerous Christian subjects were copied by Indian artists working from the illustrated bibles, prints, and paintings that were brought to the Mughal court by Jesuit missionaries and European traders.” Additionally, the figures themselves are prominently present in both the Quran and Islam itself; Mary is believed to be “above all the women of creation,” while Jesus is viewed as the penultimate prophet and messenger of Allah. 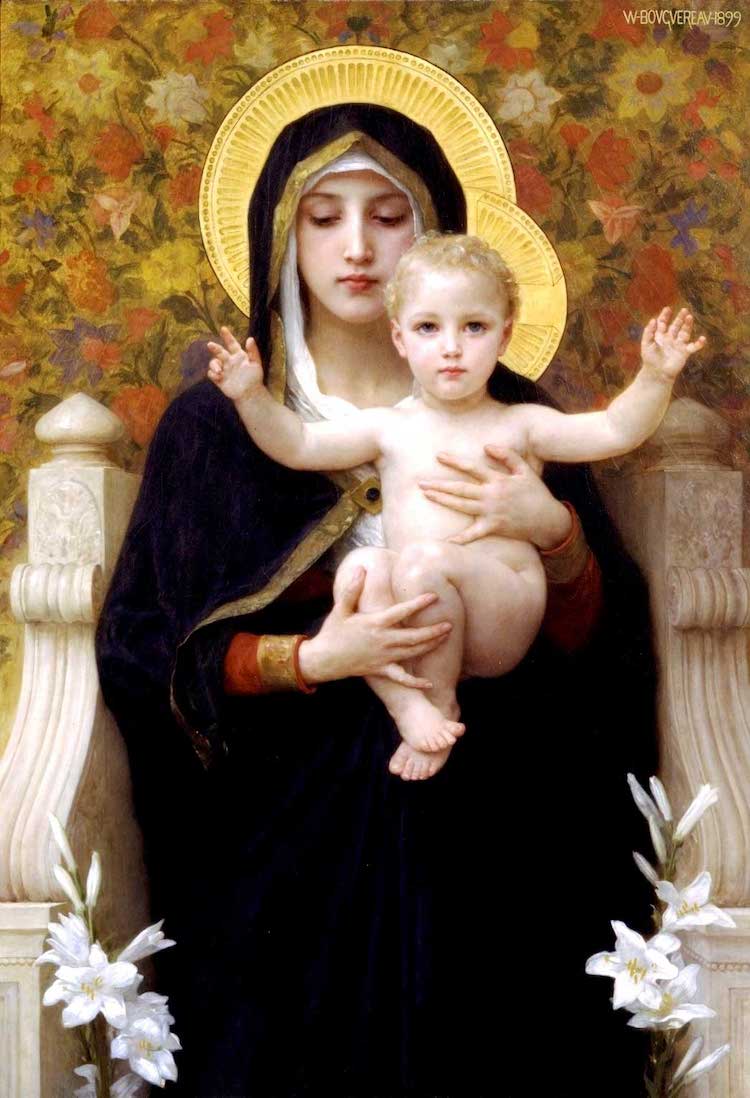 This iconography remained popular throughout the Neoclassical period, a movement inspired by classical art's sense of balance and focus on the human figure. While painters like William-Adolphe Bouguereau sought to modernize older subjects—including the Madonna and Child, who he imagined as 19th-century figures in a stylized setting—their contemporaries were already crafting increasingly avant-garde interpretations. 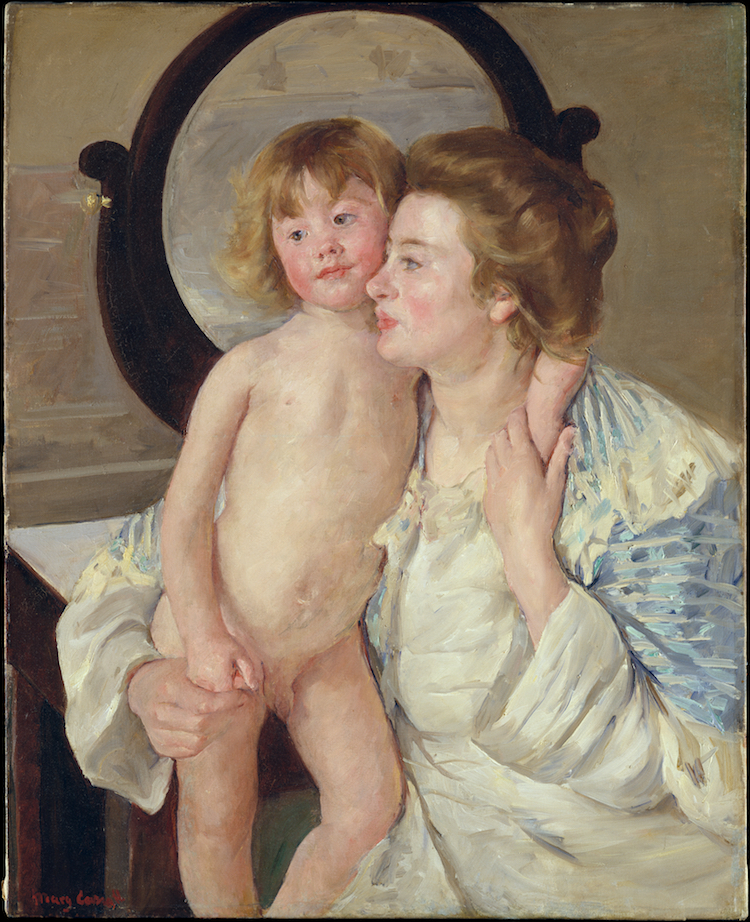 At the turn of the 19th century, American-born, Paris-based Impressionist Mary Cassatt subtly subverted traditional Madonna and Child criteria with Mother and Child (The Oval Mirror). At first glance, this charming piece looks like Cassatt's many other maternal portraits. What sets the painting apart, however, are some particularly discreet references. “The woman’s adoring look and the boy’s sweet face and contrapposto stance suggest Italian Renaissance images of the Virgin and Child,” the Metropolitan Museum of Art explains, “a connection reinforced by the oval mirror that frames the boy’s head like a halo.” 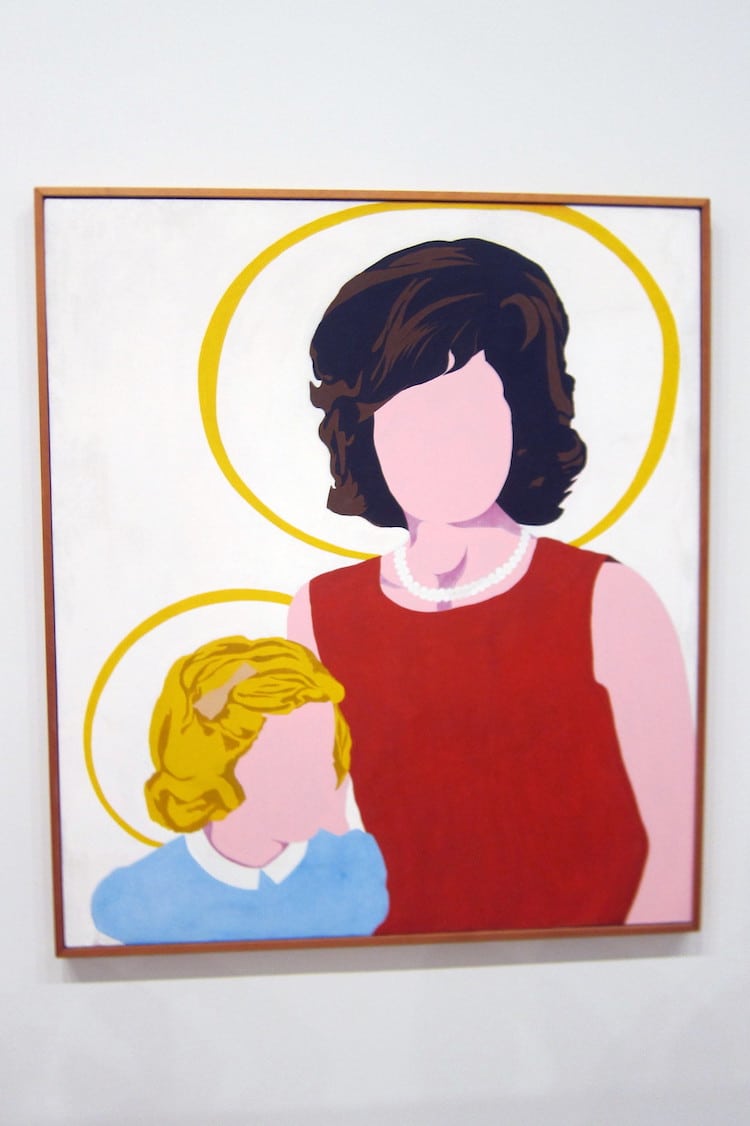 Following in Cassatt's footsteps, modern and contemporary artists have adopted and adapted the concept of the Madonna and Child. In 1942, Marc Chagall crafted The Madonna of the Village, a dreamy depiction of Mary and Jesus floating in a fantasy. In 1949, Salvador Dalí fractured the familiar iconography with The Madonna of Port Lligat. And in 1963, Allan D'Arcangelo put a pop art twist on the pair with his Madonna and Child, a graphic portrait of “icon” Jackie Kennedy and her daughter, Caroline.

In addition to showcasing their own creative powers, these forward-thinking artists have revealed an important truth about the Madonna and Child: age-old iconography can be triumphantly timeless.