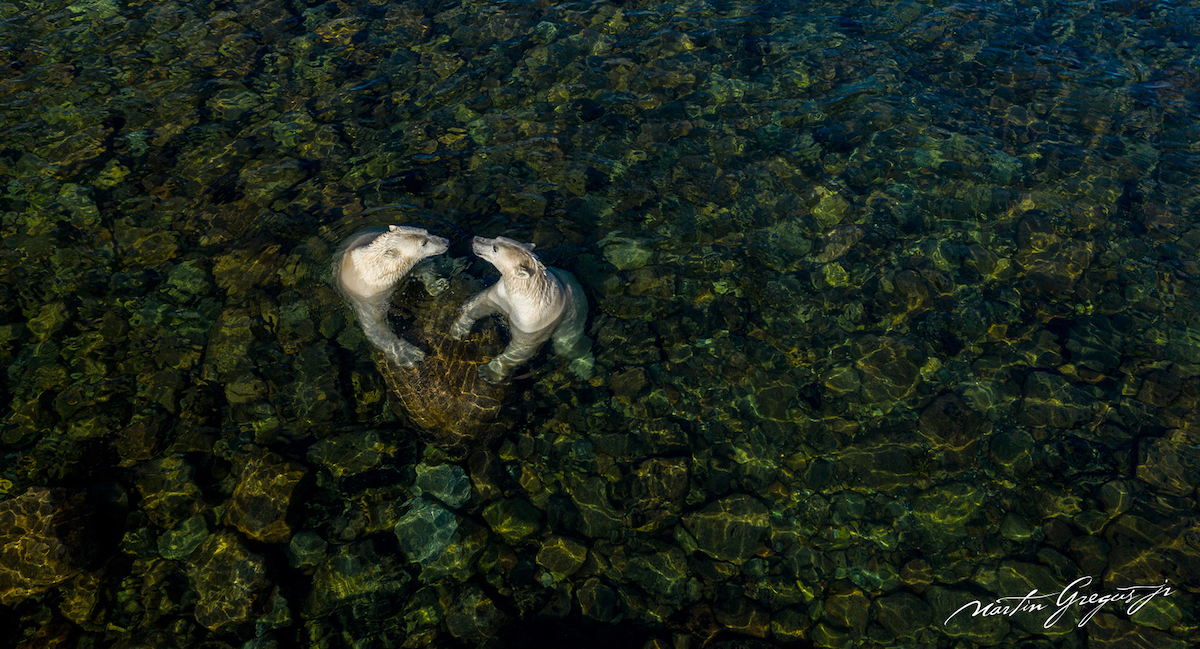 Photographer Martin Gregus was born into an artistic family. From a young age, he worked alongside his father, a photographer who has become his mentor. And now, as he continues coming into his own, he has been awarded a win at the prestigious Wildlife Photographer of the Year Awards. Gregus took home the Rising Star Portfolio Award for his work photographing polar bears in northern Canada.

Gregus spent 33 days camping in Churchill, Manitoba, where he was able to cultivate a relationship with the polar bears that shines through in his still and video imagery. Using drone photography, Gregus is able to capture incredibly intimate moments with these animals while leaving them undisturbed. From watching a mother nurse her cubs to observing two females go for a refreshing swim together, he manages to document a wide range of behaviors. And in doing so, he opens up a new world for viewers to appreciate these animals, who are so desperately struggling to thrive in their changing environment.

We had the opportunity to speak with Gregus just after his competition win to chat about how he got involved in documenting polar bears. We also discuss the challenges—and advantages—of using drones in conservation photography and the unforgettable moment when a polar bear let him and his crew “babysit” her cubs while she went out to forage. Read on for My Modern Met's exclusive interview. 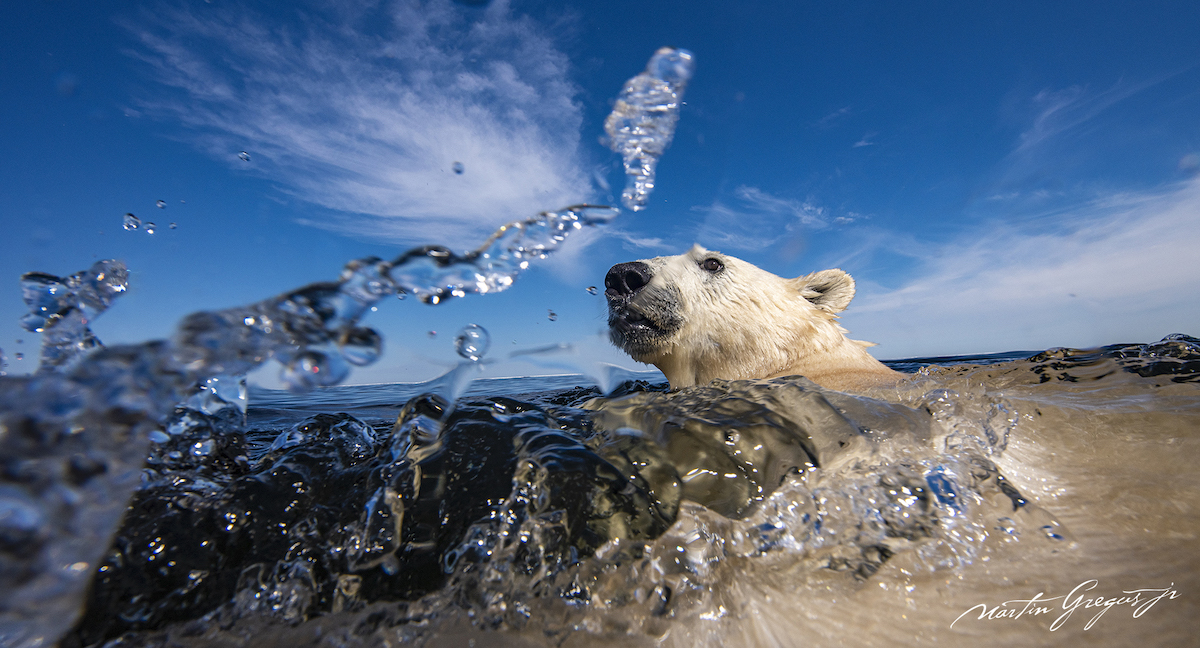 Where did the idea for this expedition come from?

The idea for this expedition came in 2015 when my father—a fellow photographer and my mentor—and I went to Churchill, Manitoba in order to document the remote community, the beluga whales, and, of course, the polar bears. While there, we were able to capture what remains my favorite drone video of beluga whales playing with a swimming polar bear. It was at that moment that I became obsessed with the summer lives of these animals; wanting to see what they do and where they go, I embarked on a 13-day camping trip during the 2020 summer lockdown. I then returned in 2021 for an additional 20 days. 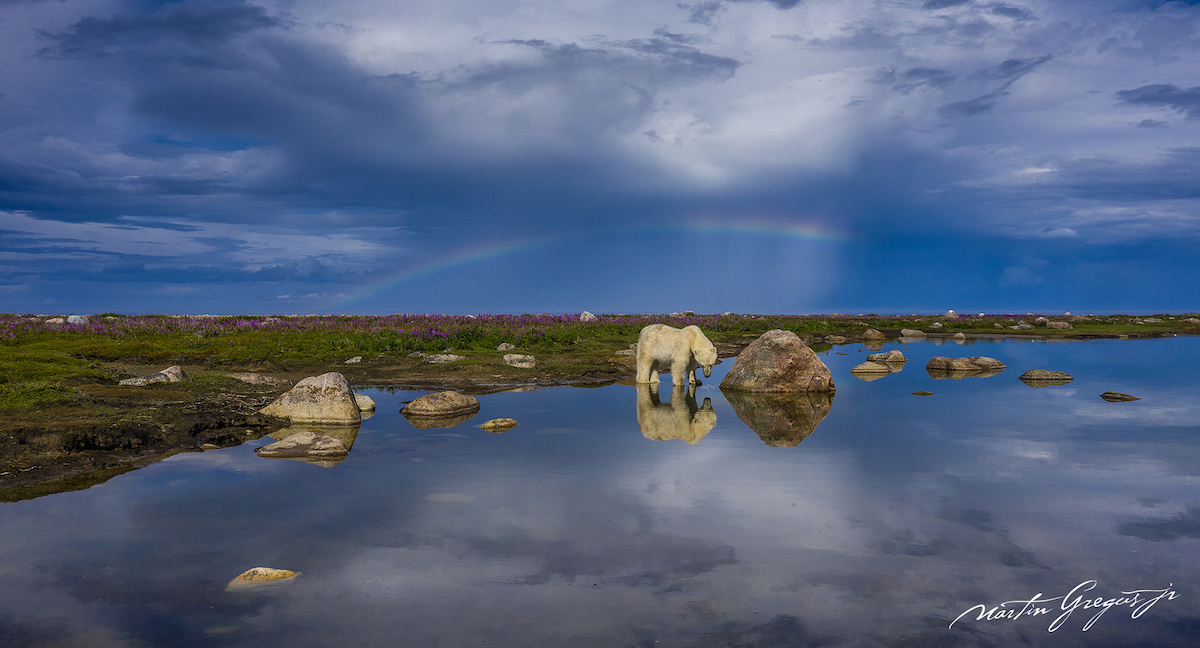 What do you find inspiring about polar bears?

Growing up, I had a long love for the natural world; through the eyes of David Attenborough and other BBC and National Geographic explorers, I dreamt that one day I would tell stories and explore the unique and remote areas of our planet. It wasn't until 2014 that I started to turn these dreams into a reality; doing my first trip to Northern Baffin Island in Nunavut to film polar bears and narwhale. Then, Churchill, Manitoba made me realized that I was hooked to our polar regions. The raw power and elegance of the polar bear is something that inspires me; to the naked eye they are fierce and intimidating, but once you get to know them, they are just beautiful creatures each with their own character. It really is extraordinary that these wild animals can show such compassion and resilience while their natural world disintegrates right under their feet. 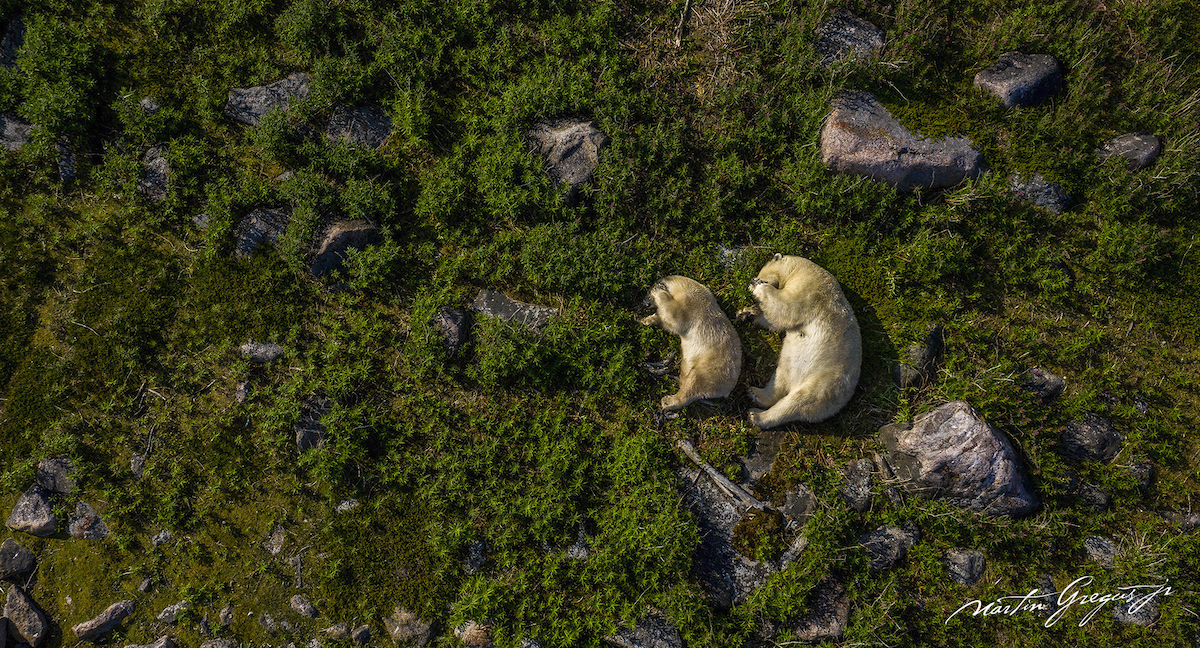 What sort of advantage did the use of a drone give you?

Having specialized in drone cinematography and photography for over eight years now I really believe that, if used correctly, they are a game-changer for wildlife conservation. While it wasn't until this year that these images got the recognition of such a prestigious competition like the Wildlife Photographer of the Year, my team and I have been developing ways to use drones to document the natural world for years. It takes a tremendous amount of time to learn the best way to fly around animals in such a way that you don’t disturb them, but once you do, drones offer a unique glimpse into their lives. 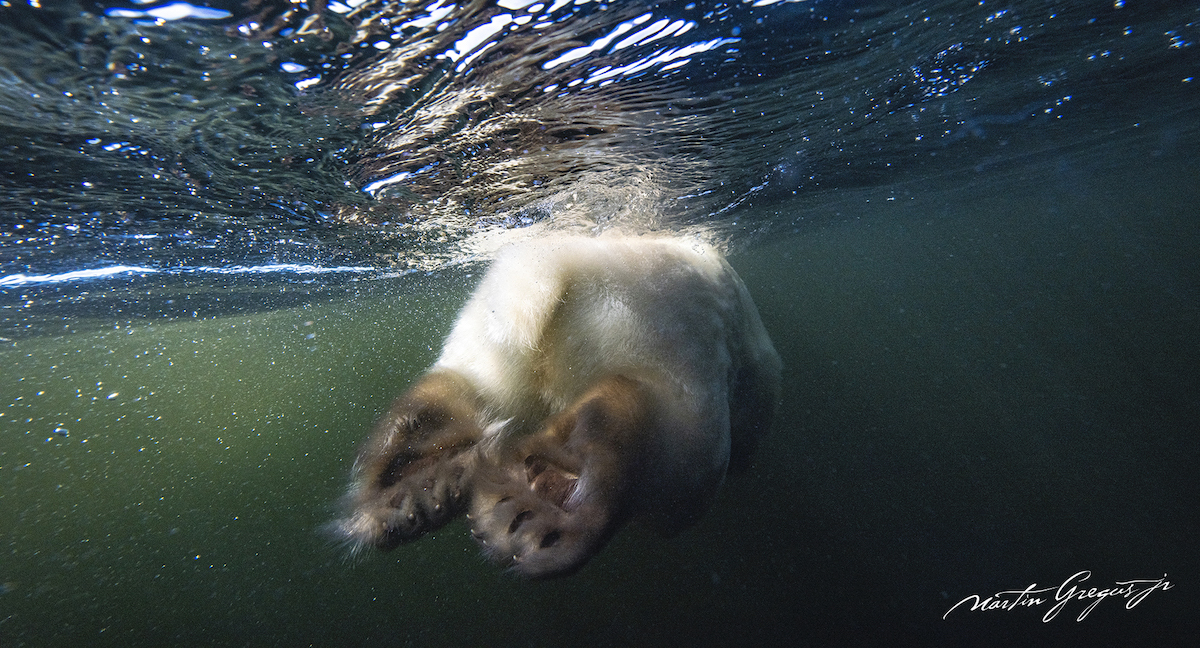 What was the most difficult thing that you experienced during your trip?

While I would say there are a few things. The main challenge was the amount of time my team and I spent in the remote wilderness. When working so remotely for such extensive periods not everything is going to go your way every day. We had to deal with heavy rains, saltwater corrosion, mechanical equipment breaking down; all the while being watched by, at times, more than four polar bears. This really teaches you to problem solve at a moment's notice, especially when the remote control camera setups and electrical gear started to break due to exposure. Some other difficulties were the lack of certain luxuries we don’t even realize like a shower, toilet, or even eating food that isn’t dried or canned. 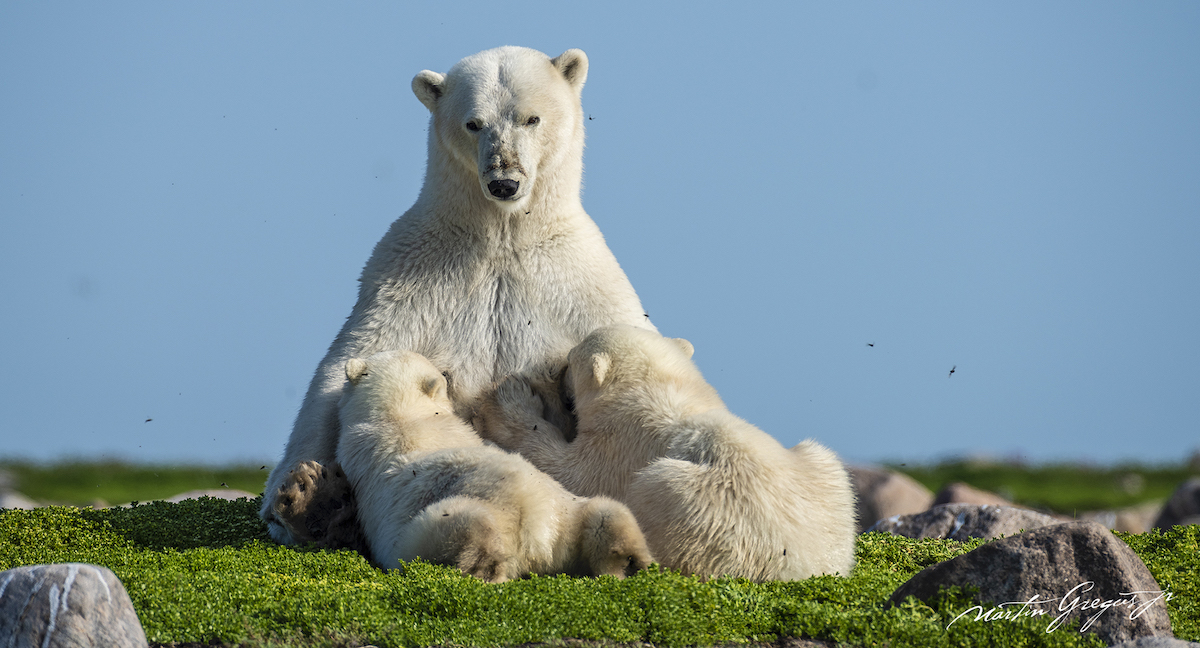 What was the most surprising thing that you saw while observing the polar bears?

While there were many unique moments, many of which we were seeing and documenting for the first time—like the three-legged cub and polar bear grizzly bear hunting together—I think the most surprising moment was watching the mom nurse her cubs. However many times I have seen it, I still get goosebumps even just thinking about it.

There was one particular moment that stood out. It was with a mom we named Wilma and her cubs Bamm Bamm and Pebbles, they were sleeping no more than 30 feet away from our camp when the cubs woke up and started yelling. Knowing it was lunchtime, the mom rolled over, sat down, and started nursing her cubs. They were so close we could hear them make sounds like two little helicopters for over five minutes. Up until that point I’ve never seen a polar bear do that.

Then, as if that wasn't enough, the mom then stood up, walked over to our camp, and left her two cubs with us while she foraged. I mean I couldn’t believe it; there it was, the arctic apex predator, trusting us enough to leave her cubs. It was a true testament to the amount of time and energy we put in, in order to build a relationship with the bears, and wow how amazing it felt to see it so clearly. 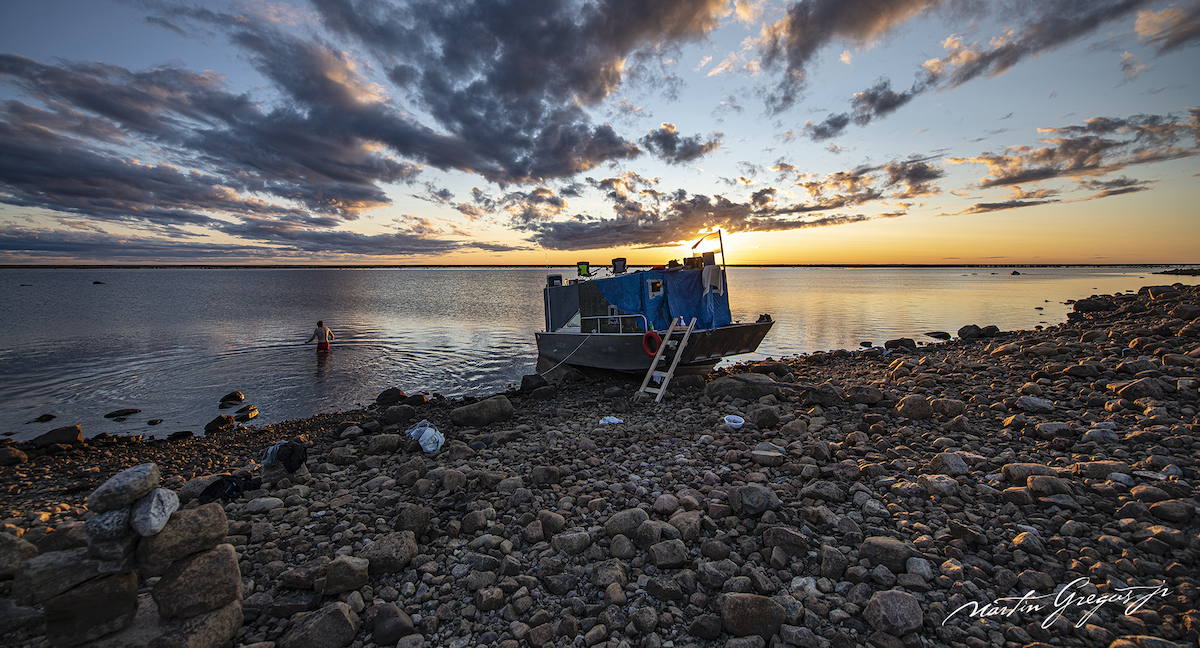 What do you hope that people learn by looking at your images and watching your video?

I really hope that people can look at my images and video and build a better relationship not just with the polar bears, but with our natural world. In order to ensure our very own survival, we need to stop fighting and destroying nature and start to learn to live in harmony alongside it. We did it on a very small scale, and in doing so we proved that given the opportunity and respect, even the world's most dangerous predators have no intention of hurting us if we have no intention of hurting them.

I don’t want to sound dumb or naive, but these animals are just as curious about us as we are of them and who can blame them for being aggressive at times. If I came over to someone's home and completely trashed it, I am sure they wouldn’t be too happy about it either.

Over the years I like to think that I have built a very strong connection with the Inuit community in the Canadian Arctic—from the far reaches of Baffin Island to the Hudson Bay, there are dozens of untold stories and wildlife spectacles remaining to be explored. Over the coming years, I hope to partner up with my friends in these communities and share not just their stories, but also those of the land and the animals that they care for. 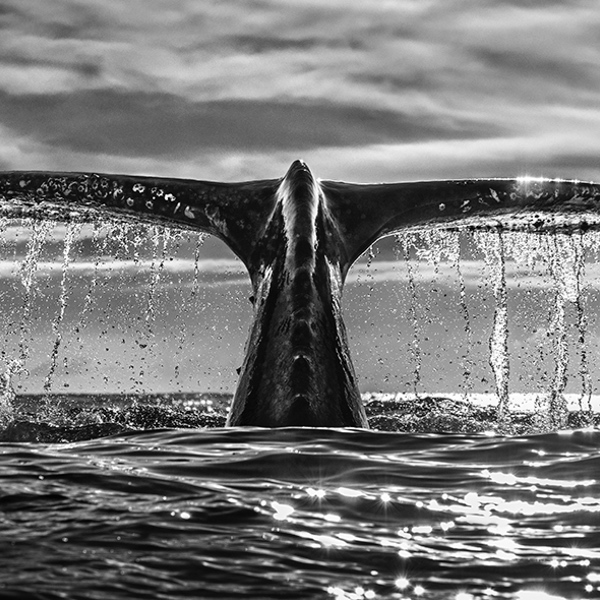