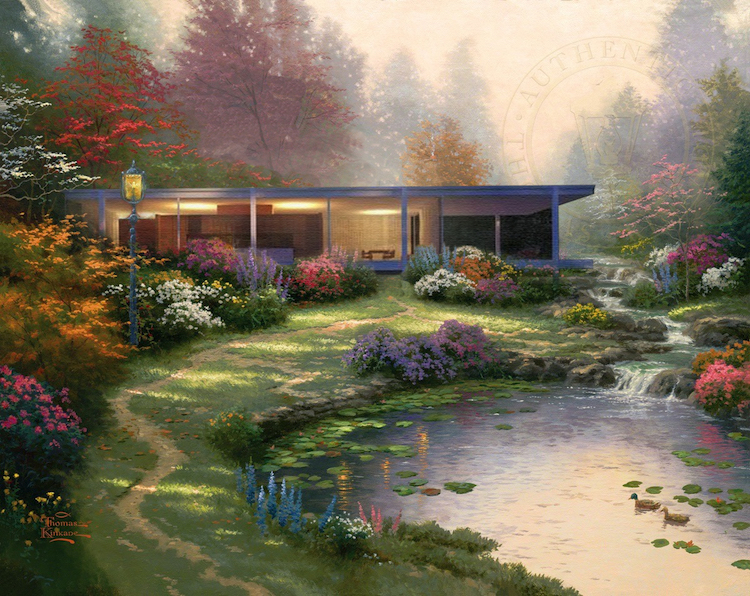 Featuring angular lines, asymmetrical compositions, and sparse color, the Modernist architecture aesthetic is the complete opposite to the pretty pastoral worlds of a Thomas Kinkade painting. However, when architect and Twitter user @robyniko merged the two in Photoshop, it strangely worked! The artist’s “Modernism mashups” see iconic buildings—including the Eames House, Philip Johnson’s Glass House, and Mies van der Rohe’s Farnsworth House—seamlessly placed in the middle of Kinkade’s idyllic scenes.

The project started when fellow architect Donna Sink tweeted, “Does anyone do paintings of Modern buildings in the style of Thomas Kincade [sic]?” @robyniko loved the idea and jumped into action, responding, “I'm in. Let's start off easy with one of Kahn's beautiful boxes (eg the Fisher house)…” The clever edit depicts Louis I. Kahn and Dr. Norman Fisher’s cube-shaped structure, complete with warmly-lit windows, nestled next to painted trees, a cobblestone path, and a running stream.

“It was one of those things you chuckle to yourself thinking about ‘what if’ and then move on with your life,” @robyniko admits. “But my family was gone for the weekend, so I decided to indulge my curiosity about how these famous modernist homes would fit into Kinkade’s universe.” The artist then worked on other mashups, transporting the Eames House next to a wishing well; Philip Johnson's Glass House into a quiet forest; and Le Corbusier’s Villa Savoye to a snow-covered woodland. And for Frank Gehry's steel-clad home, @robyniko turns it into a seaside holiday home. He humorously writes, “Pack your bags for a rocky seaside getaway at the Gehryhaus! You'll love the *squints at copy* homey chain link fence & softly weathered *checks notes* corrugated steel siding while you eat a homemade breakfast in the soft glow of the *deep sigh* aggressively geometric sun room.” 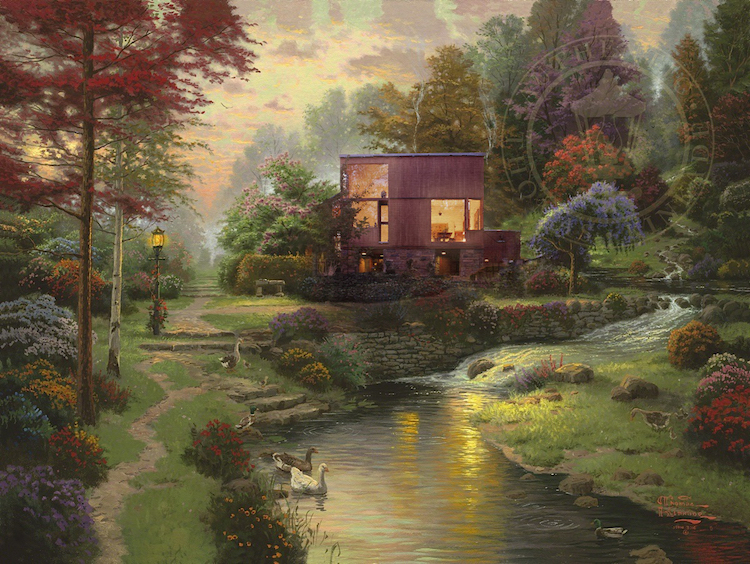 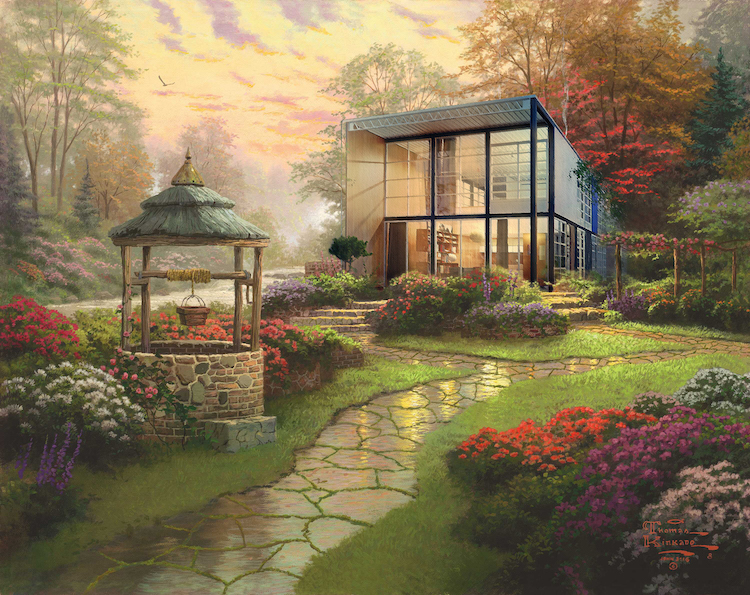 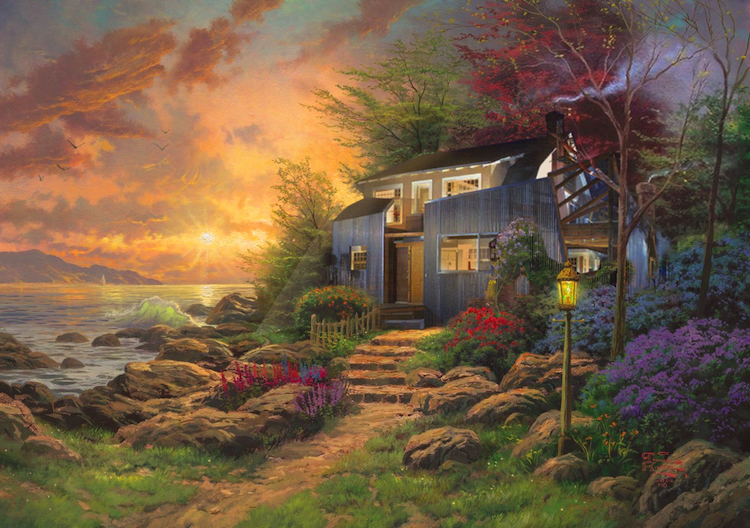 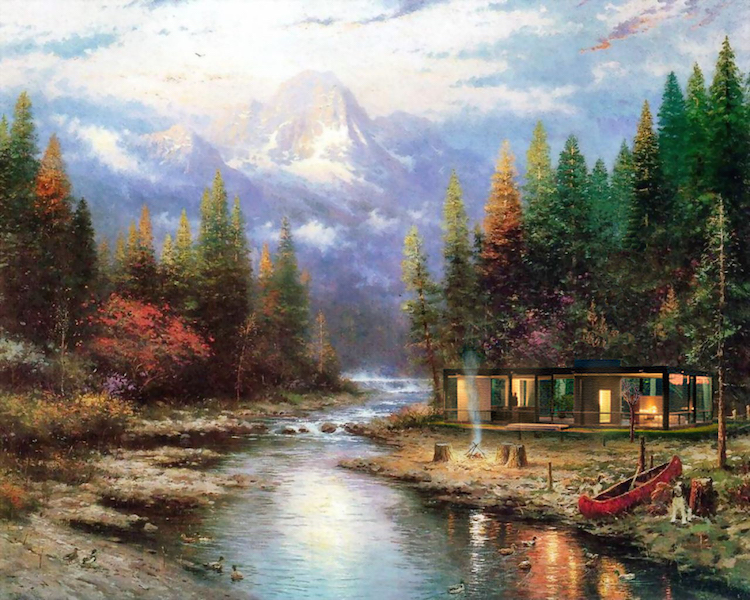 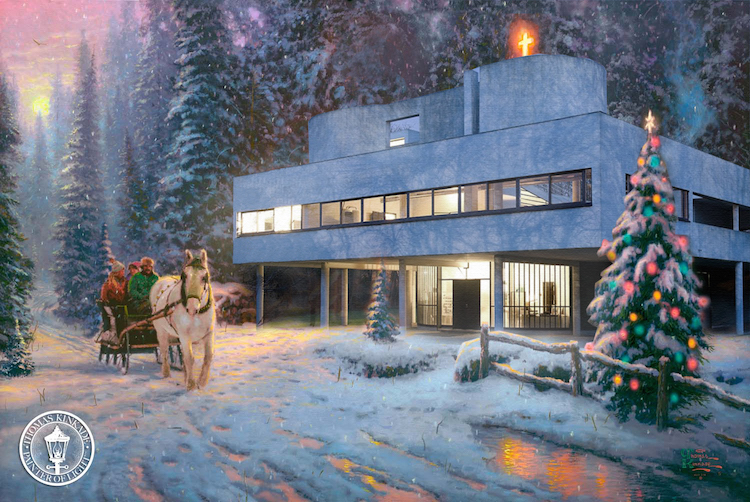 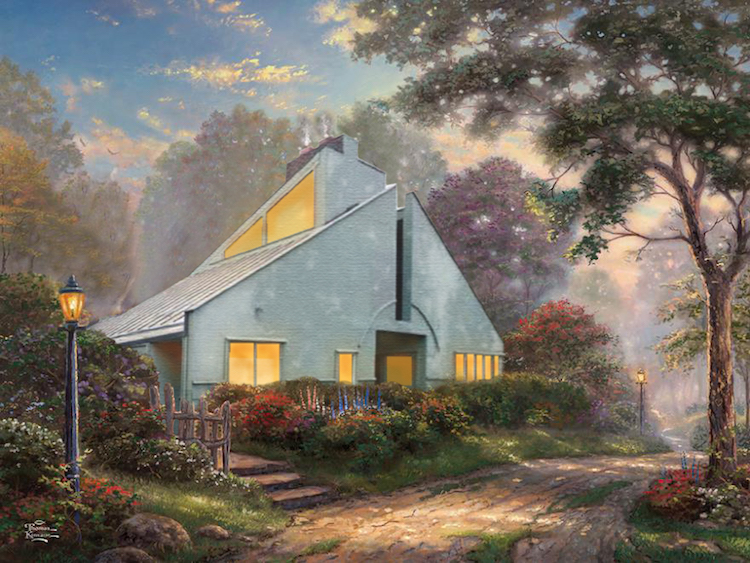 My Modern Met granted permission to use photos by @robyniko.

9 Gorgeous Modern Home Designs for Anyone Who Loves Architecture