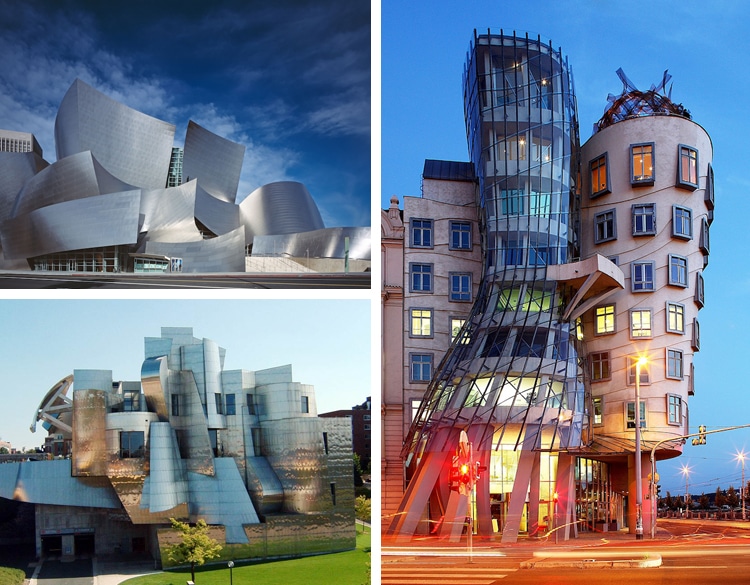 It’s rare for an architect to become a household name, but the ones who earn this distinction have their designs lauded for decades to come. Frank Gehry is one of these visionaries who has planned and built awe-inspiring structures since the early 1960s. Known for his bold architectural features and unusual shapes, Gehry’s designs transcend the ordinary building and are truly monumental works of art.

Born Frank Owen Goldberg on February 28, 1929, Gehry grew up in Toronto, Canada. Looking back at his early life, it’s prophetic to the work he’d eventually do; at a young age, Gehry built imaginary cities from the things he found in his grandfather’s hardware store. In 1949, he migrated to Los Angeles to attend the University of Southern California’s School of Architecture. (It’s here that he changed his name from Goldberg to Gehry.)

Gehry finished school in Los Angeles and relocated from the west coast to east coast. He attended—but later dropped out of—the Harvard Graduate School of Design, opting for a permanent stay in California. It’s here that he launched his Easy Edges furniture line constructed from layers of corrugated cardboard; although successful, he was still interested in designing buildings over industrial objects. He used the profits earned from Easy Edges to remodel his Santa Monica home.

Redesigning his home in 1978 was a turning point in Gehry’s career. He surrounded the bungalow with corrugated steel and “split” it open with an angled skylight. Its striking unconventionality attracted the right attention and lead him to design homes in Southern California during the 1980s. As his status in this world grew, so did his commissions. Now, many famous institutions are housed within his avant-garde designs.

So, what does a Frank Gehry building look like? Although Gehry exercises vast creativity among his designs, there are some defining features that make his architecture iconic. His style is considered deconstructivist, a movement in postmodern architecture where elements of the design appear to be fragmented; they are often described as chaotic or disjointed. Gehry will primarily use corrugated metals which give his look an unfinished appearance. This has its fair share of critics; however, his long-standing commitment to this material has created a consistent aesthetic throughout the years.

Here are 10 of Gehry's most famous structures, and they will give you an idea of why he was given the prestigious Pritzker Prize in 1989—an award meant “to honor a living architect or architects whose built work demonstrates a combination of those qualities of talent, vision, and commitment, which has produced consistent and significant contributions to humanity and the built environment through the art of architecture.” 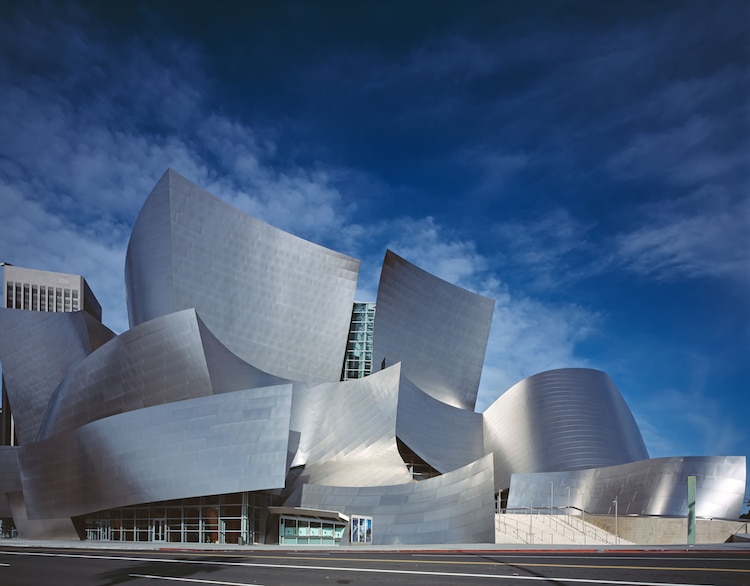 Home to the Los Angeles Philharmonic, construction on this building started in 1998. It took five years for it to be completed, but it remains one of the premier cultural attractions in the city. Inspired by Gehry's passion for sailing, the steel panels billow as if they're wafting in the wind.

This is the house that put Gehry on the architectural map. He surrounded the Santa Monica bungalow in corrugated steel with everyday materials like plywood. Although some loved it while others hated it, the redesign earned him fame and a slew of clients. The design has held up throughout the years; in 2012, it was awarded the prestigious Twenty-Five Year Award by the American Institute of Architects. 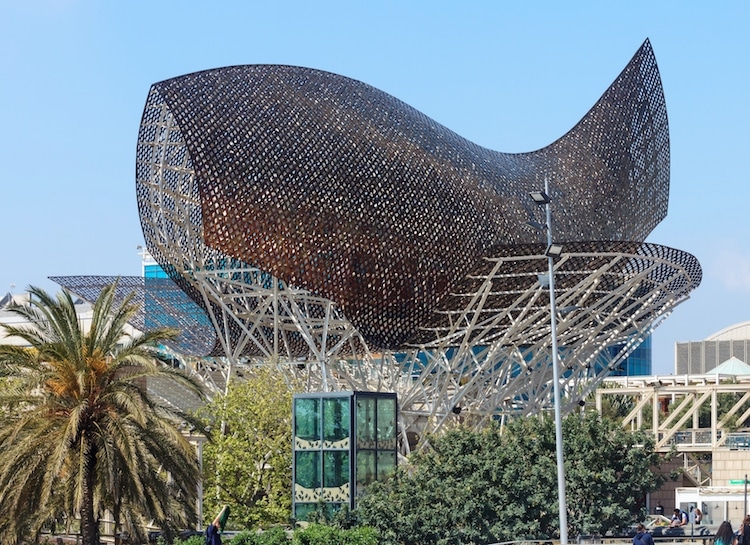 Like the Walt Disney Concert Hall, the Olympic Fish Pavilion in Barcelona, Spain takes its cues from the sea. A steel-metal fish sculpture adorns the top of this building, which was designed for the 1992 Olympic Village. Depending on the angle of the sun and weather conditions, the abstract creature changes colors. 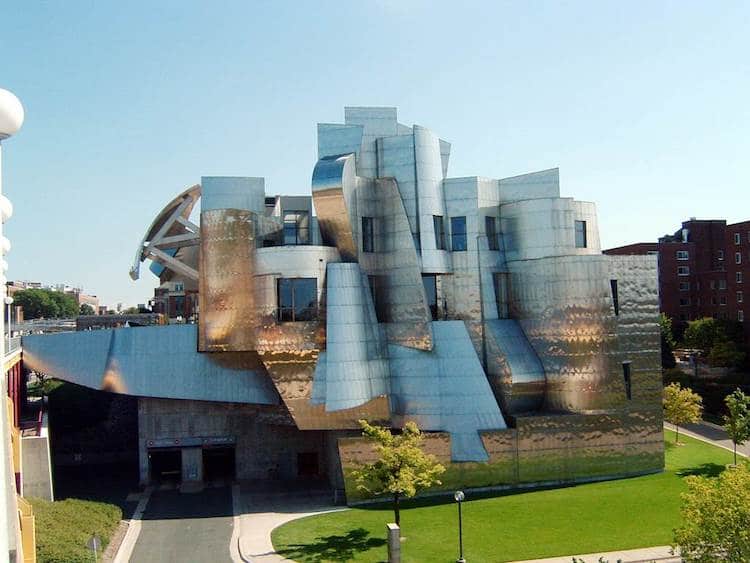 Completed by Gehry in 1993, the Weisman Art Museum remains one of the jewels of the University of Minnesota's campus. Its fractured façade is fitting for an art institution—the exterior looks as though it's part of a Cubist painting. 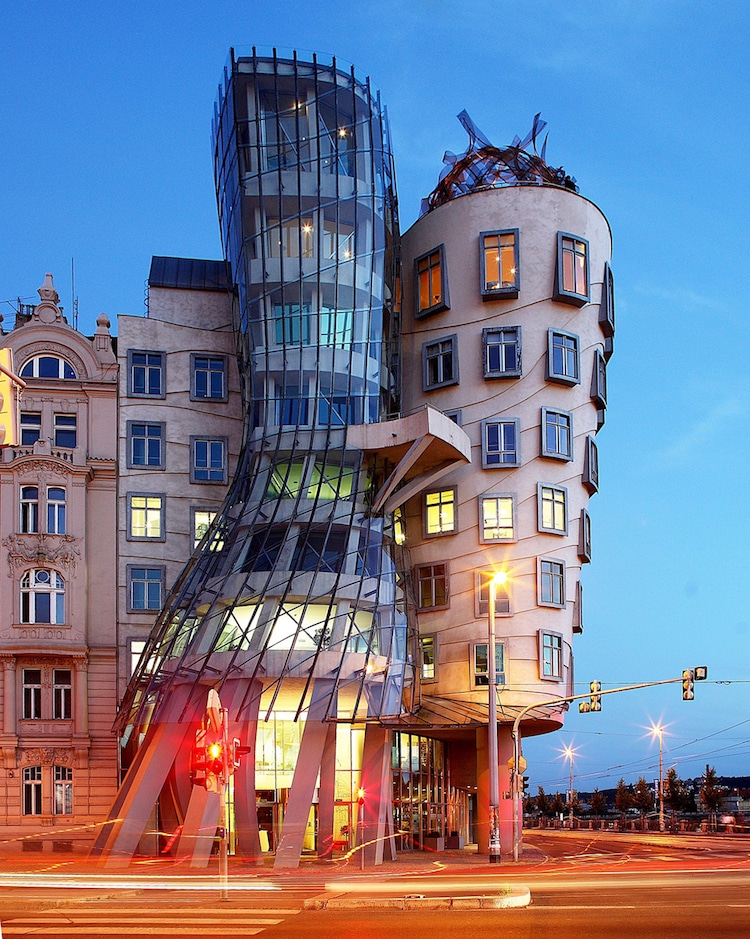 The Dancing House, with its eye-catching silhouette, was given the nickname Fred and Ginger—after dancers Fred Astaire and Ginger Rogers—by Gehry himself. In 1996, its construction was controversial, as the building doesn't fit among the Baroque, Gothic, and Art Nouveau for which Prague is known.
Page 1/2
Like Frank Gehry's unconventional designs? Share
Like My Modern Met on Facebook
Get Our Weekly Newsletter
Become a
My Modern Met Member
As a member, you'll join us in our effort to support the arts.
Become a Member
Explore member benefits
Like Frank Gehry's unconventional designs?