Stunning Finalists of the 2016 Wildlife Photographer of the Year Contest 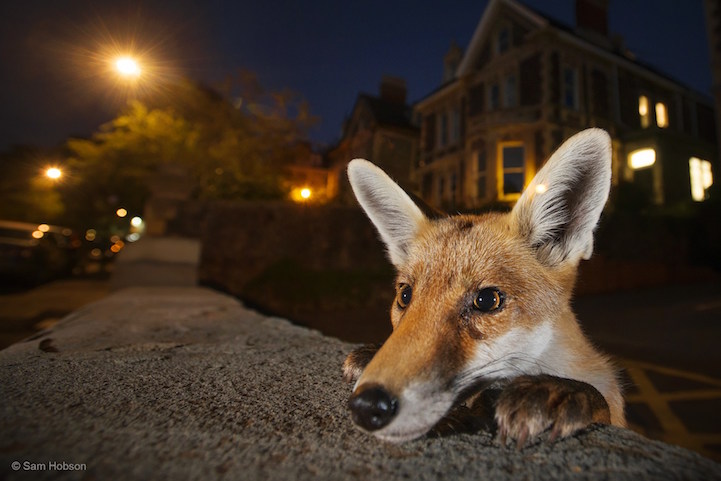 London’s Natural History Museum holds its annual Wildlife Photographer of the Year contest to showcase the diverse wonders of the natural world. This year’s edition of the world-renowned exhibition is set to debut on October 21, but a few of the finalists have been posted online as part of a sneak peek. Though only revealing a handful of what’s to come at the official show, even this small collection conveys the stunning diversity, vibrant liveliness, and wild intrigue that run rampant through the animal kingdom.

Some of the images give a glimpse into the underwater realm, revealing whales snagging herrings from the nets of fishing boats and a species called lookdown fish camouflaged in aquamarine waves. Others reveal birds with beaks wide open, mid-bite, or foxes and bears hunting for prey. Each one allows a vivid and intimate look at the adventures of animals that we don’t tend to encounter on an everyday basis.

According to the Natural History Museum, these photographs were selected from almost 50,000 entries, submitted from both professionals and amateurs spanning 95 countries. A panel of international experts judged the competitors and chose 100 winners based on creativity, originality, and technical excellence. You can learn more and view additional top picks on the Museum’s website.

Above: Nosy neighbour by Sam Hobson; Finalist, Urban
“Sam knew exactly who to expect when he set his camera on the wall one summer’s evening in a suburban street in Bristol, the UK’s famous fox city. He wanted to capture the inquisitive nature of the urban red fox in a way that would pique the curiosity of its human neighbours about the wildlife around them. This was the culmination of weeks of scouting for the ideal location – a quiet, well-lit neighbourhood, where the foxes were used to people (several residents fed them regularly) – and the right fox. For several hours every night, Sam sat in one fox family’s territory, gradually gaining their trust until they ignored his presence. One of the cubs was always investigating new things – his weeping left eye the result of a scratch from a cat he got too close to. ‘I discovered a wall that he liked to sit on in the early evening,’ says Sam. ‘He would poke his head over for a quick look before hopping up.’ Setting his focus very close to the lens, Sam stood back and waited. He was rewarded when the youngster peeked over and, apart from a flick of his ear, stayed motionless for long enough to create this intimate portrait. Nikon D800 + 17–35mm f2.8 lens at 17mm; 1/6 sec at f4.5; ISO 800; Nikon SB-700 + SB-800 flashes; PocketWizard Plus III remote release; Manfrotto tripod.” 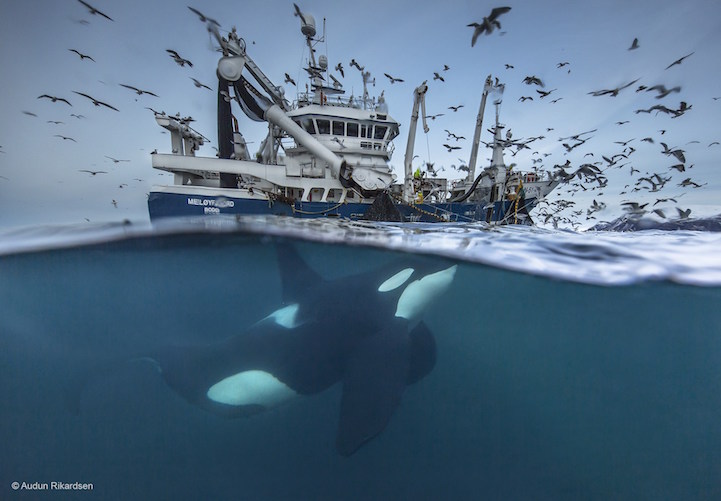 Splitting the catch by Audun Rikardsen; Finalist, The Wildlife Photojournalist Award: Single Image
“Sometimes it’s the fishing boats that look for the killer whales and humpbacks, hoping to locate the shoals of herring that migrate to these Arctic Norwegian waters. But in recent winters, the whales have also started to follow the boats. Here a large male killer whale feeds on herring that have been squeezed out of the boat’s closing fishing net. He has learnt the sound that this type of boat makes when it retrieves its gear and homed in on it. The relationship would seem to be a win-win one, but not always. Whales sometimes try to steal the fish, causing damage to the gear, and they can also become entangled in the nets, sometimes fatally, especially in the case of humpbacks. The search for solutions is under-way, including better systems for releasing any whales that get trapped. Having grown up in a small coastal fishing community in northern Norway, Audun has always been fascinated by the relationship between humans and wildlife. And for several years, he has been trying to document the interactions between whales and fishermen. A specially designed, homemade underwater camera housing allows him take split-level pictures in low light. But he needs to get close to a whale, though not close enough to disturb it or be dragged under a boat’s side propeller. So having the fishermen’s permission to snorkel by their boats has been as important as being tolerated by the whales. Canon EOS 5D Mark III + 11– 24mm f4 lens at 11mm + 1.2 Lee filter; 1/200 sec at f6.3; ISO 640; custom- made housing.” 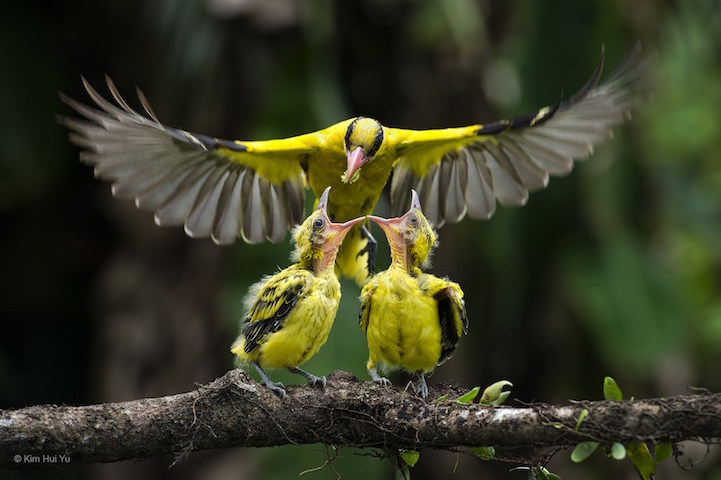 Grub time by Hui Yu Kim; Finalist, 15-17 years old
“In parks and gardens in many parts of Asia, the loud, fluty whistles and striking plumage of black-naped orioles are familiar to suburban residents. While on a morning jog in the Malaysian town of Sungai Petani, Kim spotted an oriole nest high up in a mango tree in a fruit orchard. Keeping watch on the tree every morning for 10 days, she finally saw that the two partially fledged chicks had fluttered down from their small hammock-like nest and were perched on a branch. Returning with a hide, she set it up with a view straight to the branch, which was almost at eye-level, and then waited. Her reward came when one of the adults flew in with a beakful of food at the perfect angle, providing the perfect composition. Nikon D4 + 70–200mm f2.8 lens at 200mm; 1/1000 sec at f5.6; ISO 640.” 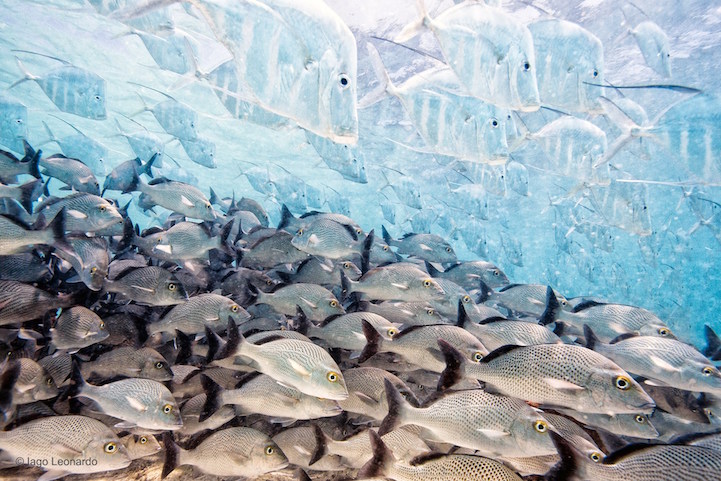 The disappearing fish by Iago Leonardo; Finalist, Reptiles, Amphibians and Fish
“In the open ocean, there’s nowhere to hide, but the lookdown fish – a name it probably gets from the steep profile of its head, with mouth set low and large eyes high – is a master of camouflage. Recent research suggests that it uses special platelets in its skin cells to reflect polarized light (light moving in a single plane), making itself almost invisible to predators and potential prey. The platelets scatter polarized light (common under water), depending on the angle of the sun and the fish, doing a better job than simply reflecting it like a mirror. This clever camouflage works particularly well when viewed from positions of likely attack or pursuit. What is not yet clear is whether the fish can increase its camouflage by moving the platelets or its body for maximum effect in the ocean’s fluctuating light. The lookdowns’ disappearing act impressed Iago, who was free-diving with special permission around Contoy Island, near Cancun, Mexico. Using only natural light, he framed them against a shoal of grey grunt to highlight the contrast between them. Canon EOS 5D + 20mm f2.8 lens; 1/320 sec at f11; ISO 400; Ikelite housing.” 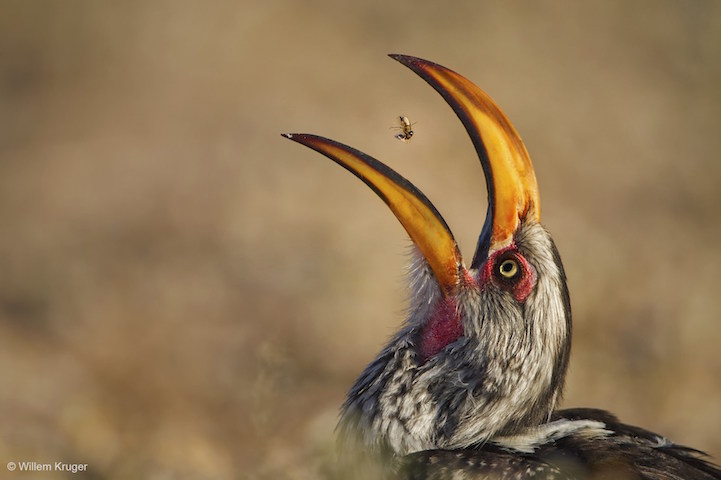 Termite tossing by Willem Kruger; Finalist, Birds
“Termite after termite after termite – using the tip of its massive beak like forceps to pick them up, the hornbill would flick them in the air and then swallow them. Foraging beside a track in South Africa’s semi-arid Kgalagadi Transfrontier Park, the southern yellow-billed hornbill was so deeply absorbed in termite snacking that it gradually worked its way to within 6 metres (19 feet) of where Willem sat watching from his vehicle. Though widespread, this southern African hornbill can be shy, and as it feeds on the ground – mainly on termites, beetles, grasshoppers and caterpillars – it can be difficult for a photographer to get a clear shot among the scrub. The bird feeds this way because its tongue isn’t long enough to pick up insects as, say, a woodpecker might, and though its huge bill restricts its field of vision, it can still see the bill’s tip and so can pick up insects with precision. What Willem was after, though, was the hornbill’s precision toss, which he caught, after a 40-minute, 40°C (104°F) wait. Nikon D3S + 600mm f4 lens; 1/5000 at f4; ISO 800; Kirk WM-2 window mount + Benro GH-2 Gimbal tripod head.” 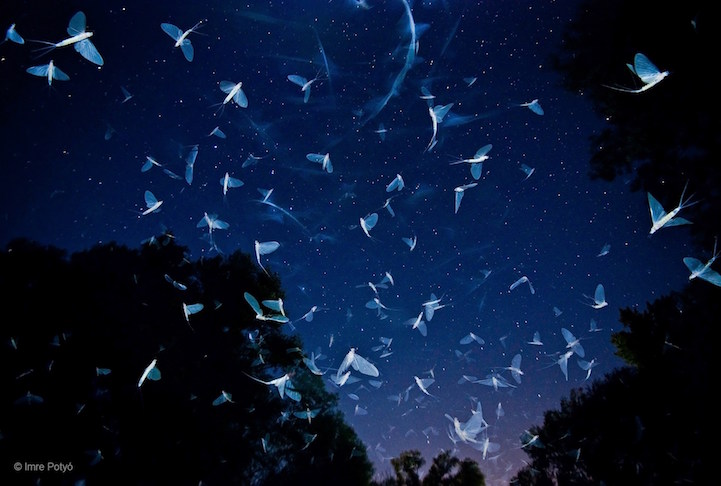 Swarming under the stars by Imre Potyó; Finalist, Invertebrates
“Imre was captivated by the chaotic swarming of mayflies on Hungary’s River Rába and dreamt of photographing the spectacle beneath a starlit sky. For a few days each year (at the end of July or beginning of August), vast numbers of the adult insects emerge from the Danube tributary, where they developed as larvae. On this occasion, the insects emerged just after sunset. At first, they stayed close to the water, but once they had mated, the females gained altitude. They filled the air with millions of silken wings, smothering Imre and his equipment in their race upstream to lay their eggs on the water’s surface. Then they died, exhausted, after just a few hours. This ‘compensatory flight’ – sometimes as far as several kilometres upstream – is crucial to make up for the subsequent downstream drift of the eggs and nymphs, and luckily for Imre, it was happening under a clear sky. To capture both the mayflies and the stars, he created an in-camera double exposure, adjusting the settings as the exposure happened. A flashlight added the finishing touch, tracing the movement of the females on their frantic mission. Nikon D90 + Sigma 17–70mm f2.8–4.5 lens at 17mm; double exposure 1.3 sec at f14 and 30 sec at f3.2; ISO 800; in-camera flash; flashlight; Manfrotto tripod + Uniqball head.” 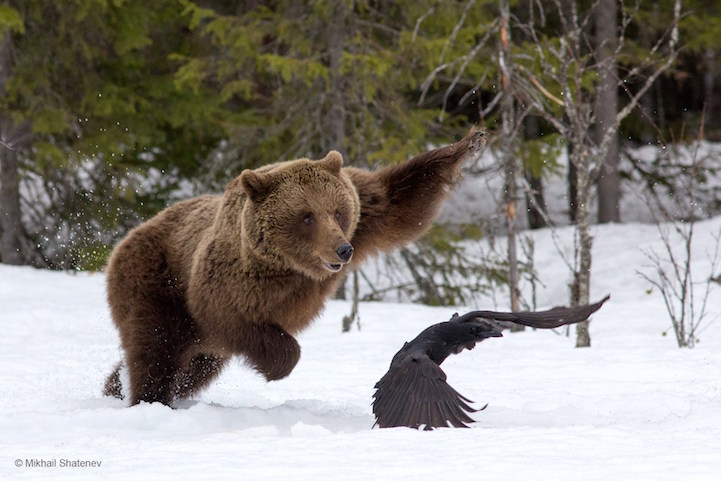 Beware a mother bear by Mikhail Shatenev; Finalist, 15-17 years old
“It was his second night without sleep, and Mikhail had to force himself to keep his eyes open and fixed on the swampy coniferous taiga around the hide. He was in bear-watching country, a remote region of Kainuu, Finland, and the hide was just a few hundred metres from the Russian border. The chances of seeing a brown bear were mixed. On the one hand, bait had been placed near the hide, and there are 20–25 bears which forage in the region. But it was April, and not all the bears would have left their dens, most of which are in Russia. But Mikhail was lucky, and his vigilance paid off. A female with two cubs came by to check out the hide. She was jittery and had reason to be. In the spring, hungry males emerging from hibernation will attack small cubs. When a raven landed too close to a cub, she roared and lunged at it, giving Mikhail the dynamic shot he was after. Canon EOS 60D + 300mm f4 lens; 1/1000 sec at f7.1; ISO 1000.”