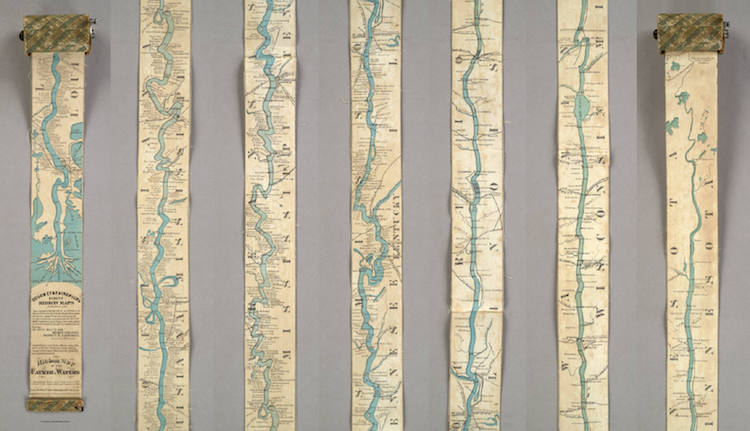 Before the advent of GPS and Google Maps, plenty of people spent a lot of time fumbling with bulky atlases on the road. But what if they discovered that they could fit 2,600 miles in your pocket? And what if they realized this was actually first accomplished in 1866? Known as ribbon maps, the ingeniously designed piece of paper charted the entire length of the Mississippi River from its source at Lake Itasca, Minnesota to the Gulf of Mexico.

Measuring 11 feet in length, the small strip of paper was just about 3 inches wide and was meant to be wound around a spool that would fit in your pocket. More than a map, the Ribbon Map of the Father of Waters, acted as a guidebook for those traveling down the Mississippi. Marketed to steamboat tourists, the map detailed the interesting river towns one encountered while floating downriver. The second half of the 19th-century was a boom for the steamboat industry, particularly in the lower Mississippi. By patenting their ribbon map, St. Louis entrepreneurs Myron Coloney and Sidney B. Fairchild filled a hole in the market.

Aside from providing tourists with much-needed information, there's a suggestion that the map provided symbolic healing in a country emerging from the wounds of the Civil War. “There was this idea that because the river went from north to south, it was a great unifier for the country,” writes art historian Nenette Luarca-Shoaf. In fact, Coloney and Fairchild incorporated significant battle sites into the map, including plantations and batteries. “These new landmarks form elements of a newly unified river’s historical landscape and reinforce the notion that the Mississippi was national terrain.”

Today, copies are scattered across American libraries, local museums, and cartography collections. Each spooled up in their little cases by a hand crank, they're an interesting forerunner of the pocket maps we commonly see today.

Ribbon Maps were invented in 1866 as a portable guide for travelers floating down the Mississippi River by steamboat.

What a clever invention! Share
Like My Modern Met on Facebook
Get Our Weekly Newsletter
Become a
My Modern Met Member
As a member, you'll join us in our effort to support the arts.
Become a Member
Explore member benefits

What a clever invention!