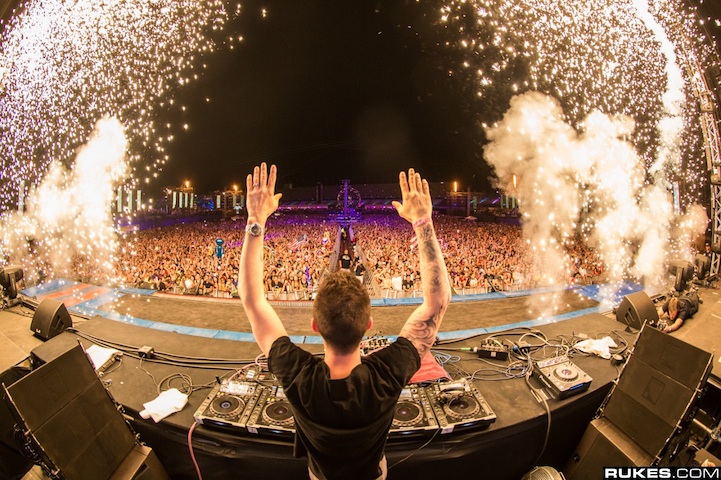 As the number one DJ photographer in the world, you could say that Rukes, who you may remember from this post, has special privileges. But then again, who else has a client list that includes Swedish House Mafia, Deadmau5, Dirty South and Kaskade? On Thursday, August 30, W Hotel in Times Square New York began an interactive exhibition that features never-before-seen photos of famous DJs taken from a different perspective – inside the DJ booth. What makes the exhibition interactive? Next to each photo, there's an iPod touch that allows visitors to listen to the music of that particular DJ.

Electronic Dance Music (or EDM) has surged in popularity and this new exhibit titled Inside the Booth, is just another reminder of how mainstream it has now become. Reports The Wall Street Journal, “As the promoter (Mike Bindra, co-founder of Electric Zoo) sees it, electronic dance music is moving away from clubs to become a concert mainstay–much in the way rock musicians adopted larger sounds to fill arenas.”

Rukes says of of his exhibit, “I'm excited to showcase my photography to more people out there; with the enormous growth of EDM recently, more and more people are starting to discover the photographs I have been taking to document the recent history of the industry. It's been amazing to watch the musicians I have worked with since the beginning grow, like Deadmau5, and others just start their groundbreaking rise in the industry, like Zedd.”

Now here are some heart-thumping, adrenaline-pumping photos you can expect to find at the exhibition, which will run until September 30, 2012.

Above: Dirty South: A classic “Rukes” photo of the DJ with his hands in the air, fireworks going off and a huge crowd in front of him. This is probably the best one I have taken so far; all straight out of the camera. 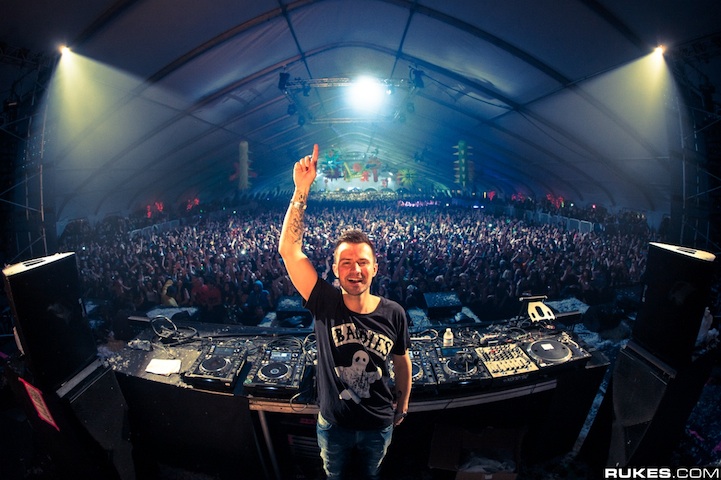 Dirty South – At Beyond Wonderland, Dirty South decided to do a reverse “rukes” photo and capture him with the hands in the air facing me, rather than the crowd. 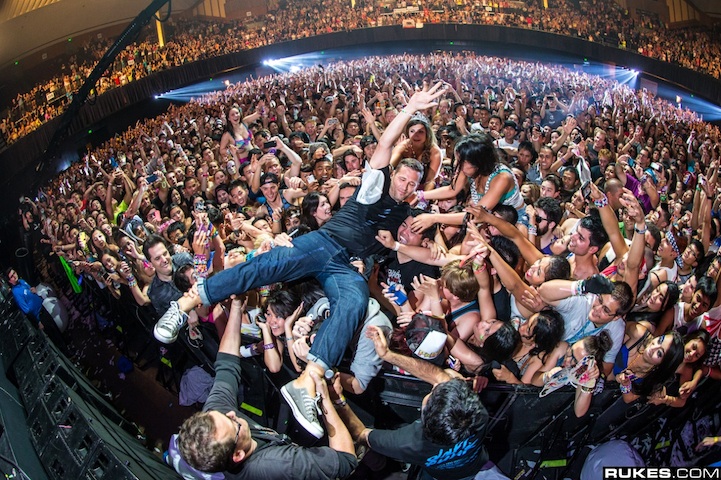 Kaskade – Kaskade decided to do a brief crowd surf after his San Francisco gig. 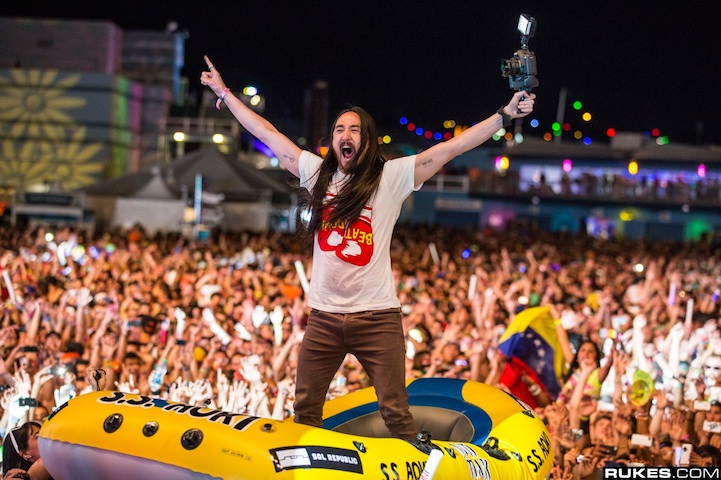 Steve Aoki – Steve loves to interact with the crowd, and one of those things is to crowd surf on an inflatable raft. In this shot, he took his videographer's camera along for the ride! 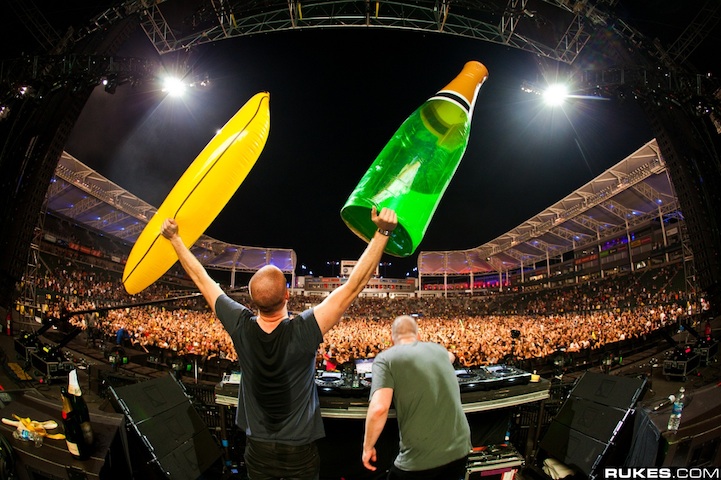 Dada Life – Dada Life's signature is having bananas and champagne around, so it was fitting that while opening for Tiesto at the Home Depot Center in LA, they had inflatable ones to show off to the crowd! 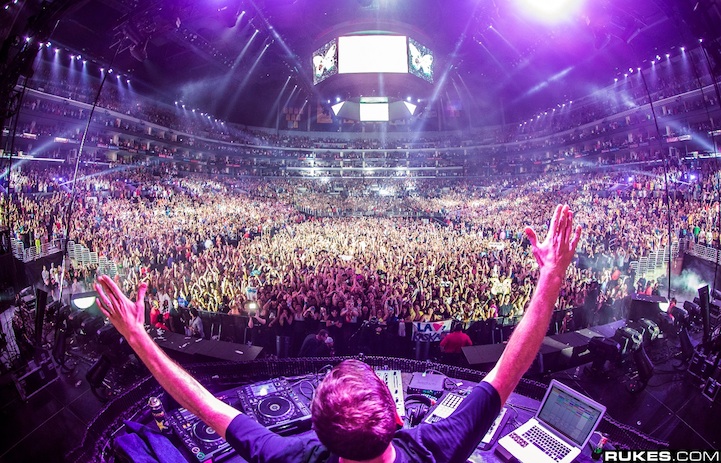 Kaskade – Being the first EDM act to not only play, but sell out the Staples Center in LA, Kaskade had a gigantic crowd enjoying his set! 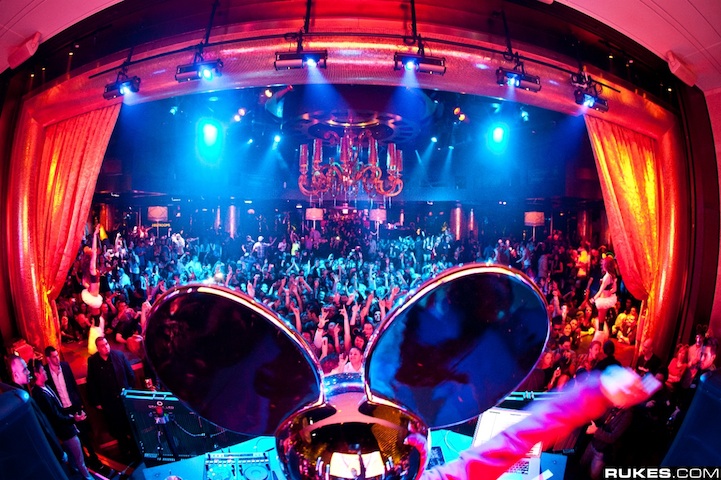 Deadmau5 – One of the most defining photos of the club XS in Las Vegas, this is when Deadmau5 premiered his Chrome head. This shot pretty much captures the energy XS usually has at a giant gig.