By Madeleine Muzdakis on December 3, 2020 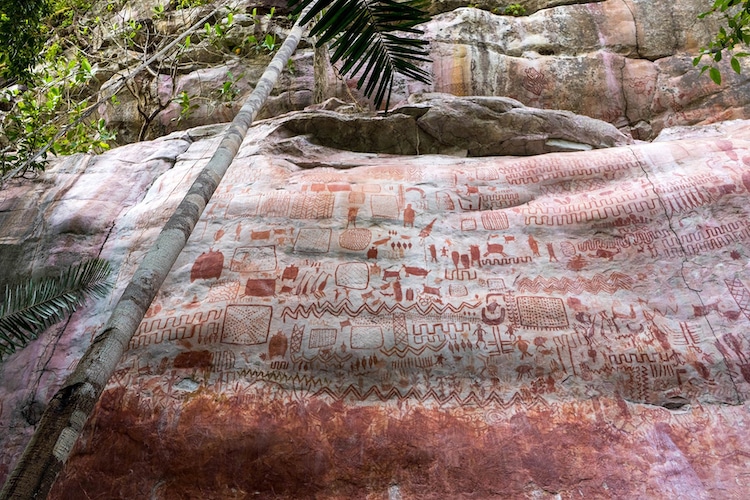 Deep within the dense Amazon rainforest in modern-day Colombia, early human settlers of the region had recorded their surroundings in rock art. Now, an 8-mile stretch of cliff decorated with thousands of drawings has been discovered deep in the remote site known as Serranía de la Lindosa. The collection of detailed illustrations dates back to between 11,800 years and 12,600 ago—just as the world was warming out of the Ice Age. Found in 2017 by researchers from Britain and Colombia, the public is just now getting a first glimpse of this prehistoric site, which will feature in the Channel 4 production Jungle Mystery: Lost Kingdoms of the Amazon. This stunning example of prehistoric art has been dubbed the “Sistine Chapel of the ancients,” and it promises to reveal important information about prehistoric South Americans.

To study the cliffs of Serranía de la Lindosa, archeologists needed to clear their mission with both the Colombian government and the unallied rebel forces in the region. A five-hour trek on foot was also necessary to reach the site. Researchers were awed by the sheer number of individual paintings—as yet uncounted, they number in the tens of thousands. Drawn in red-ochre (a natural clay pigment), prehistoric humans are depicted among the flora and fauna which once populated the Amazon region. Fish, lizards, and porcupines are recognizable to the modern viewer. The area also boasts extinct prehistoric creatures such as palaeolama, mastodons, and giant sloths. These creatures roamed a savanna and scrub brush landscape which was quite different from the modern rainforest.

In the ancient artwork, prehistoric humans are also depicted. They dance, wear masks, and hunt. Archeologist Mark Robinson said in a statement, “The paintings give a vivid and exciting glimpse [into] the lives of these communities.” Researchers studying the paintings can only guess at the significance of certain scenes at present. However, they are sure that the Serranía de la Lindosa paintings will provide critical knowledge of prehistoric human behavior and human-animal interactions. Among the behaviors depicted is a curious one: humans suspended or jumping from wooden towers. The researchers believe structures such as these may explain how the ancient artists painted scenes well above a typical human's height on the cliff wall.

The cliff art preserves a world which was in environmental flux. The Amazon rainforest as we know it today began to develop at the end of the last Ice Age—roughly the period the rock art was created. For Ella Al-Shamahi—the archaeologist and explorer who also serves as the host of Jungle Mystery—the rock art is an exciting find that will take years for scholars to document and research. She says, “One of the most fascinating things was seeing ice age megafauna because that’s a marker of time. I don’t think people realize that the Amazon has shifted in the way it looks. It hasn’t always been this rainforest.” While research on the site has been interrupted due to the pandemic, the team believes the nearby rainforest hides more prehistoric wonders to be discovered.

To catch the premier of Channel 4's Jungle Mystery: Lost Kingdoms of the Amazon on December 5, check out their website for more information.

Deep in the Amazon rainforest in modern-day Colombia, researchers discovered a tens of thousands of 12,000-year-old rock paintings in red-ochre on the cliffs of Serranía de la Lindosa.

The rock art depicts prehistoric humans interacting with animals who used to roam the savannas which came before the rainforest.

These Ice Age creatures include mastodons and giant sloths.