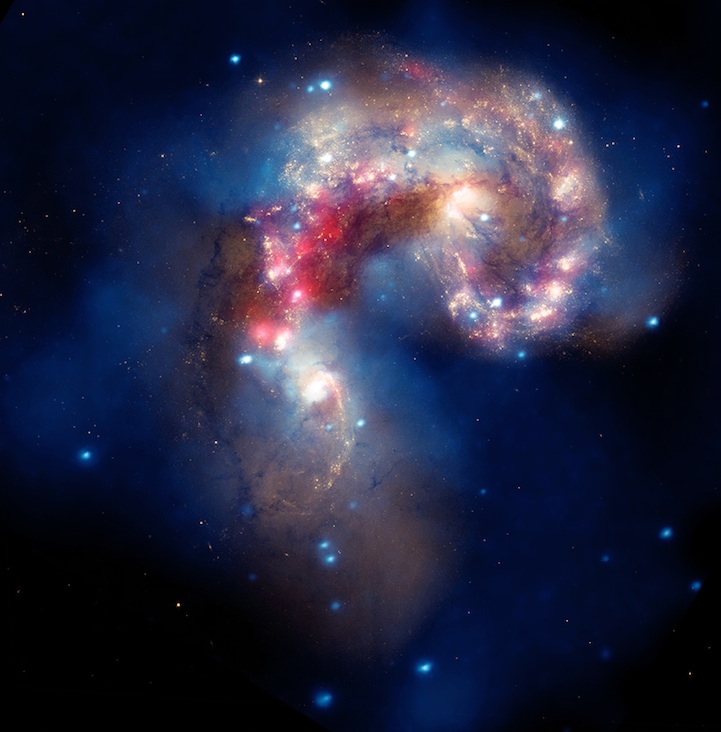 While NASA's Hubble is one of the largest and most well-known space telescope for astronomy, there are actually four large, powerful space-based telescope that fall under NASA's series of Great Observatories – Hubble, the now deorbited Compton Gamma Ray Observator (CGRO), Chandra X-ray Observatory (CXO) and Spitzer Space Telescope (SST). Each serves a particular function (Hubble – visible light and near-ultraviolet, CGRO – gamma rays, hard x-rays, CXO – soft x-rays, and SST – infrared spectrum), examining a specific region of the electromagnetic spectrum. As the world's most powerful X-ray telescope, Chandra X-ray Observatory allows scientists from around the world to obtain unprecedented X-ray images of space, showing us the evolution of the universe. Here, for you, are some recently released photos that show just what Chandra can do. These photos, many of them composite images from multiple space telescopes, give us a new way to appreciate our incredible universe. First photo: A pair of colliding galaxies about 62 million light years from Earth. The composite image is from the Chandra X-ray Observatory (blue), the Hubble Space Telescope (gold and brown), and the Spitzer Space Telescope (red). (Photo release date: August 05, 2010.) Star Formation Region 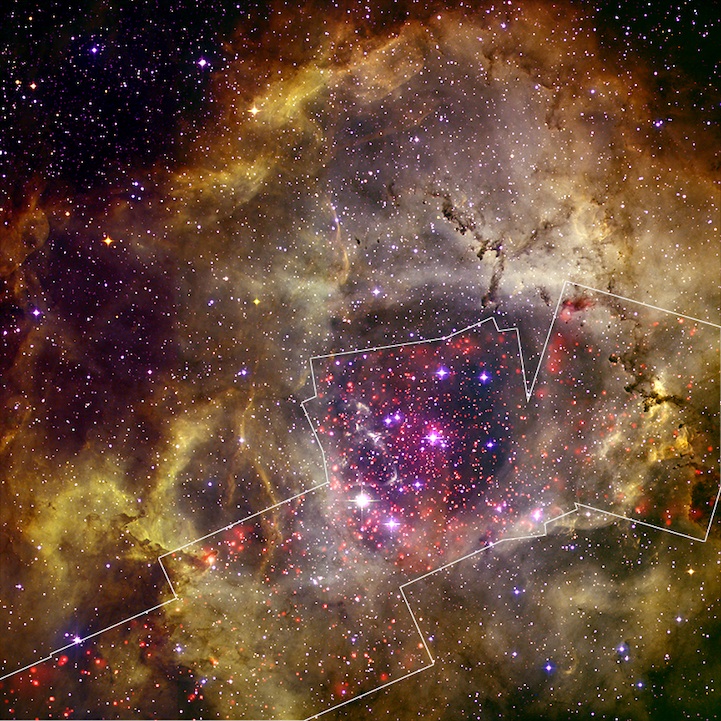 The Rosette Nebula is a star-forming region about 5,000 light years from Earth. The X-rays reveal hundreds of young stars clustered in the center of the image and additional fainter clusters on either side. (Photo release date: September 08, 2010.) Remnants of an Exploded Star 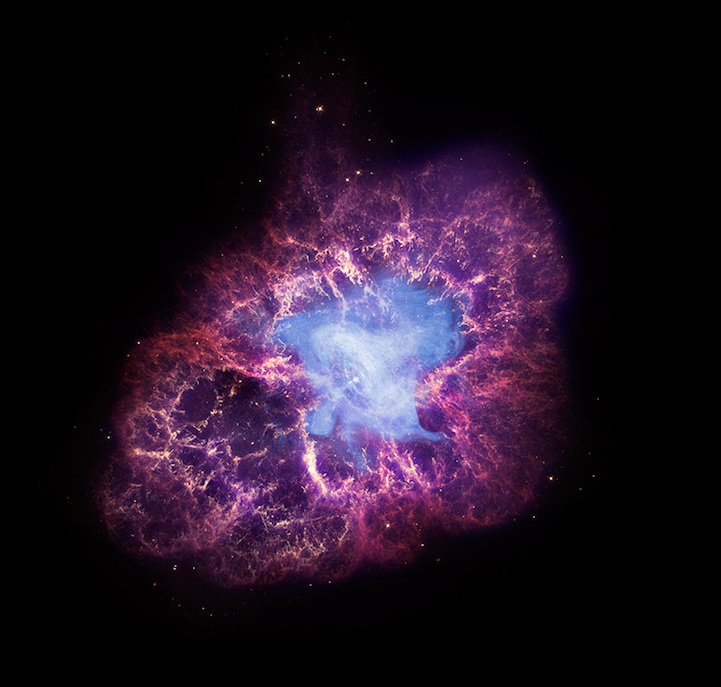 A star's spectacular death in the constellation Taurus was observed on Earth as the supernova of 1054 A.D. Now, almost a thousand years later, a super dense object — called a neutron star — left behind by the explosion is seen spewing out a blizzard of high-energy particles into the expanding debris field known as the Crab Nebula. (Photo release date: November 23, 2009.) Aftermath of a Supernova Explosion I 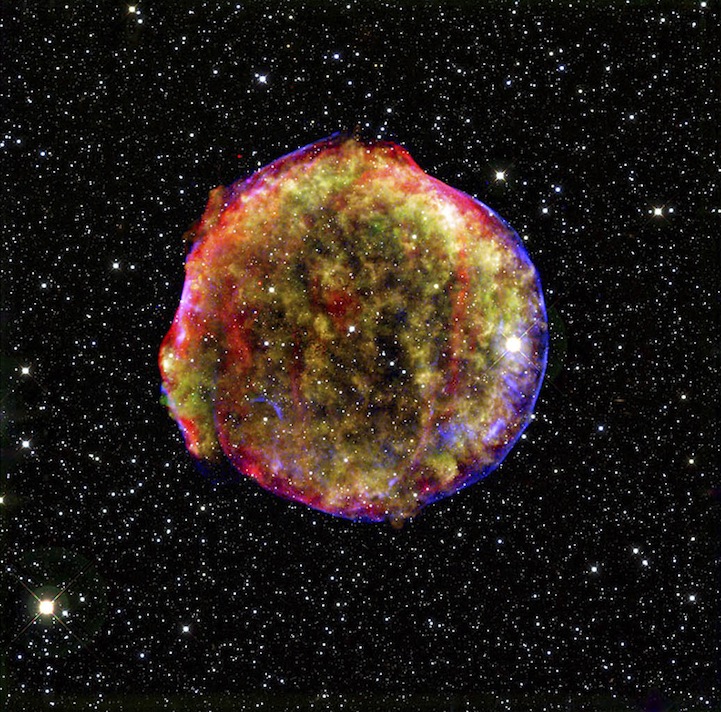 This composite image of the Tycho supernova remnant shows the scene more than four centuries after the brilliant star explosion witnessed by Tycho Brahe and other astronomers of that era. The explosion has left a blazing hot cloud of expanding debris (green and yellow) visible in X-rays. The location of ultra-energetic electrons in the blast's outer shock wave can also be seen in X-rays (the circular blue line). Newly synthesized dust in the ejected material and heated pre-existing dust from the area around the supernova radiate at infrared wavelengths of 24 microns (red). Foreground and background stars in the image are white. (Photo release date: February 18, 2009.) Aftermath of a Supernova Explosion II 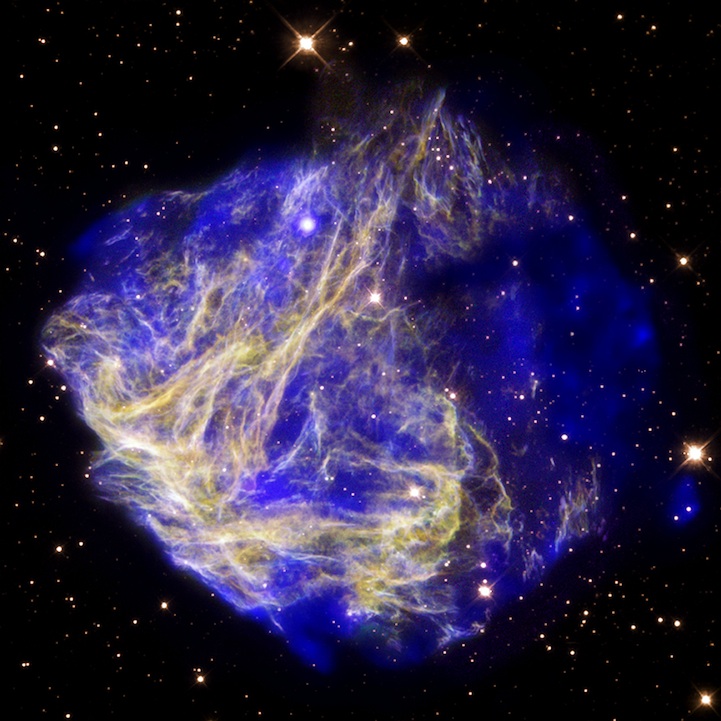 This beautiful composite image shows N49, the aftermath of a supernova explosion in the Large Magellanic Cloud. A new long observation from NASA's Chandra X-ray Observatory, shown in blue, reveals evidence for a bullet-shaped object being blown out of a debris field left over from an exploded star. (Photo release date: May 24, 2010.) Heart of the Milky Way 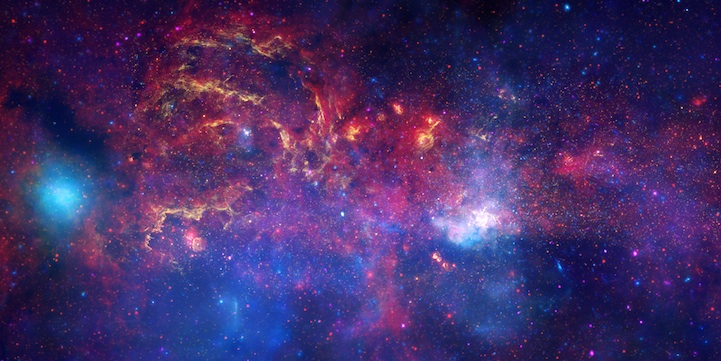 In this spectacular image, observations using infrared light and X-ray light see through the obscuring dust and reveal the intense activity near the galactic core. In this image, X-rays from Chandra are blue and violet, near-infrared emission from Hubble is yellow, and Spitzer's infrared data are red. (Photo release date: November 10, 2009.) Supermassive Black Hole at the Center of the Milky Way 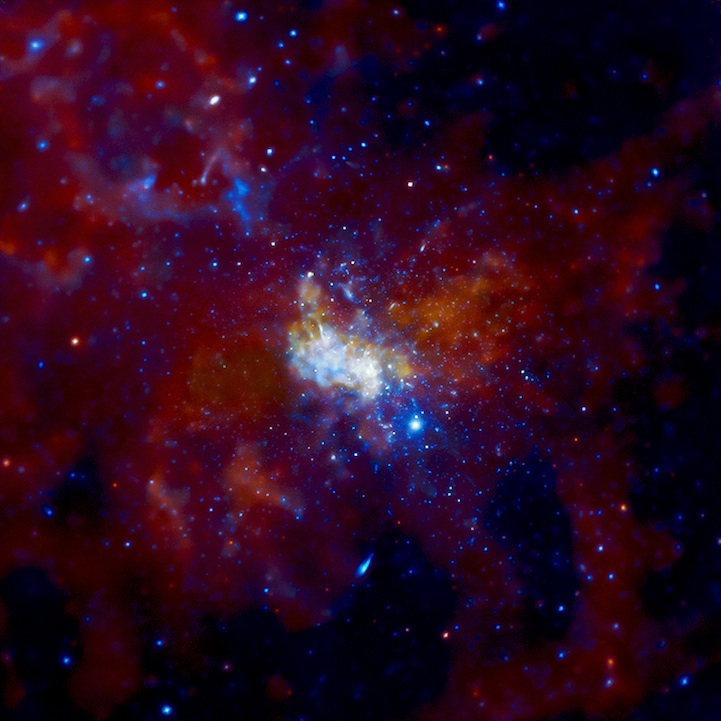 The supermassive black hole at the center of the Milky Way is known as Sagittarius A* (or Sgr A*, for short). Astronomers have known for a long time that Sgr A* is relatively quiet compared to other black holes of similar size. A new theoretical model based on a very long Chandra observation of the region may explain the feeble consumption by Sgr A*. The deep Chandra image also reveals other interesting features of this region including supernova remnants and mysterious filaments. (Photo release date: January 5, 2010.) Supermassive Black Hole in a Nearby Galaxy 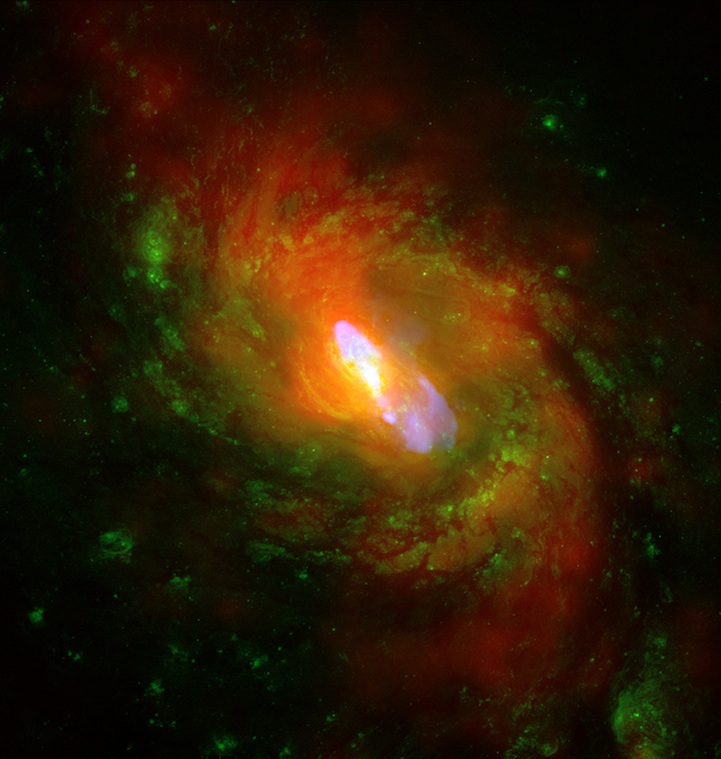 This is a composite image of NGC 1068, one of the nearest and brightest galaxies containing a rapidly growing supermassive black hole. X-ray data from the Chandra X-ray Observatory are shown in red, optical data from the Hubble Space Telescope in green and radio data from the Very Large Array in blue. (Photo release date: March 3, 2010.) A Neighboring Galaxy 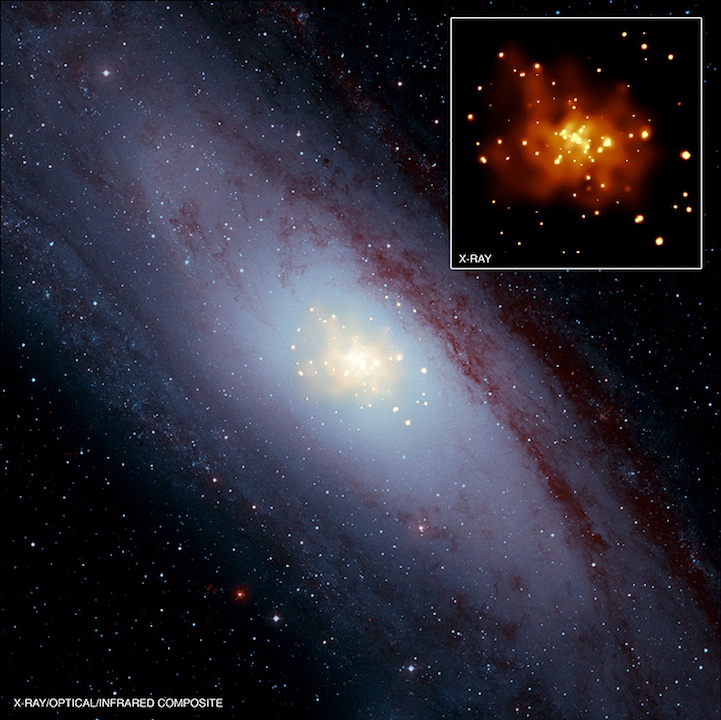 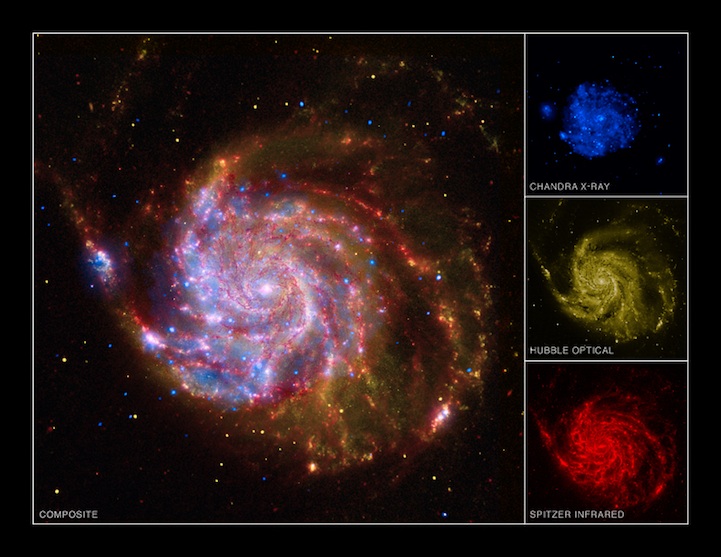 M101 is a face-on spiral galaxy about 22 million light years away in the constellation Ursa Major. It is similar to the Milky Way galaxy in many ways, but is larger. The colors correspond to the following wavelengths: The X-rays detected by Chandra are colored blue. Sources of X-rays include million-degree gas, the debris from exploded stars, and material zooming around black holes and neutron stars. The red color shows Spitzer's view in infrared light. It highlights the heat emitted by dust lanes in the galaxy where stars can form. Finally, the yellow coloring is visible light data from Hubble. Most of this light comes from stars, and they trace the same spiral structure as the dust lanes. (Photo release date: February 10, 2009.) Source: Chandra More Incredible Photos of Space: Most Incredible Twitpics from Space (23 photos) NASA Releases Incredible Photos on Flickr (14 photos) Hi-Def Pics – Space Exploration and the International Space Station (11 photos)