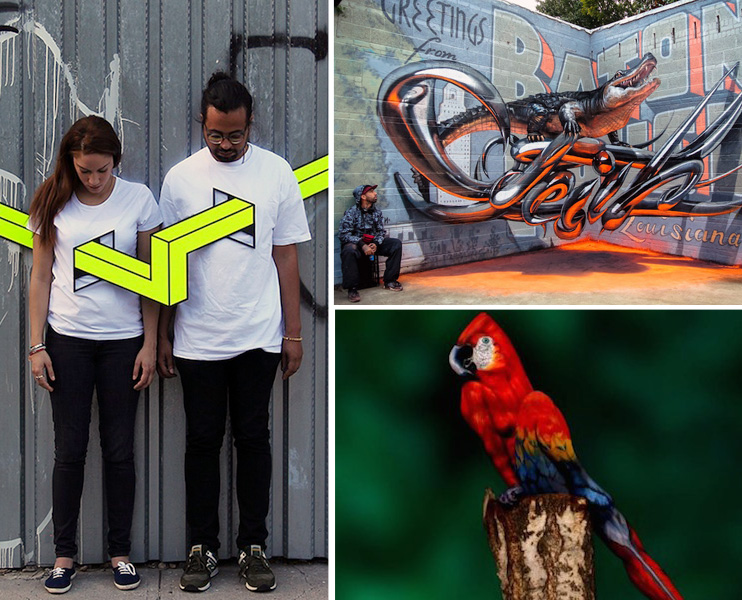 Over the past few years we've seen some truly mind-bending illusions (2012, 2011). It's now that time of year again when we look back and show you the best ones of 2014. What distorted our senses and changed our perception of reality? This year, we saw a lot of street art works that pushed creative boundaries like Strok's figures walking on walls and Aakash Nihalani's piercing neon shapes. We also got to enjoy a woman painted perfectly as a parrot and a simple placemat that warped our minds. We had so many great illusions in 2014, we had to expand our list from 10 to 12. Enjoy, everyone! 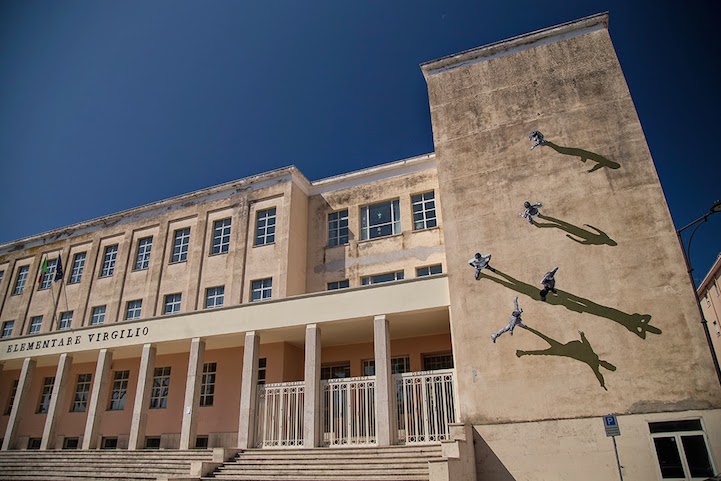 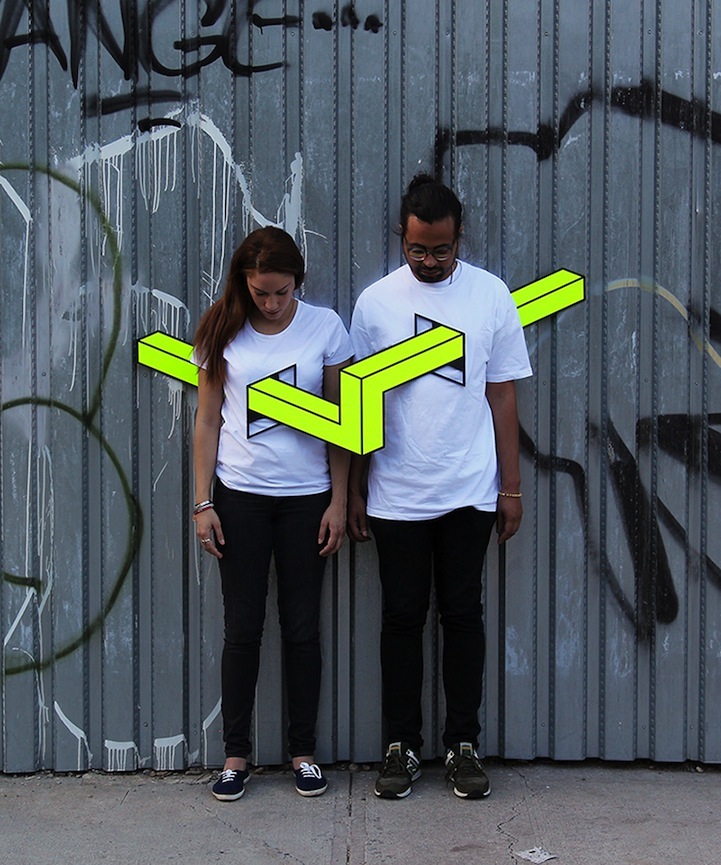 New York-based artist Aakash Nihalani has moved away from his previously admired interior and landscape tape illusions and has turned towards human subjects as his newest canvas. In his series, Landline, Nihalani cleverly pierces human torsos throughout Brooklyn with three-dimensional isometric rectangles and squares made out of neon tape. See more, here. 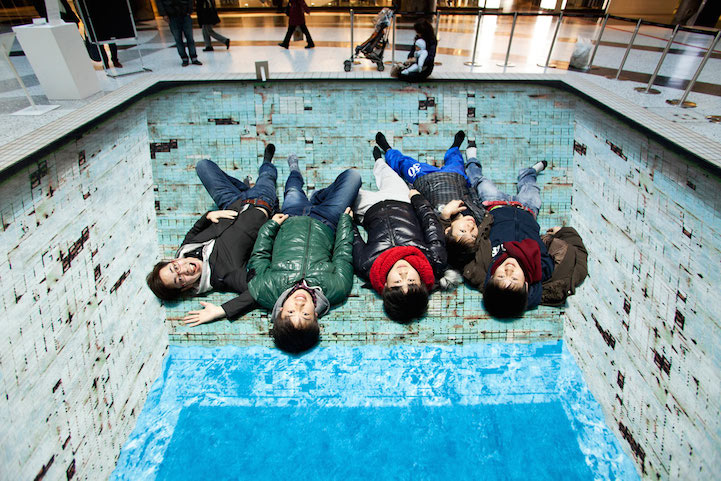 The pool that artist Jeroen Bisscheroux crafted isn't the type that you'd swim in. Instead, it's a completely flat art installation and optical illusion. The carpet-like painting is titled POOL, loss of color and it depicts a nearly empty, deteriorating swimming pool. See more, here. 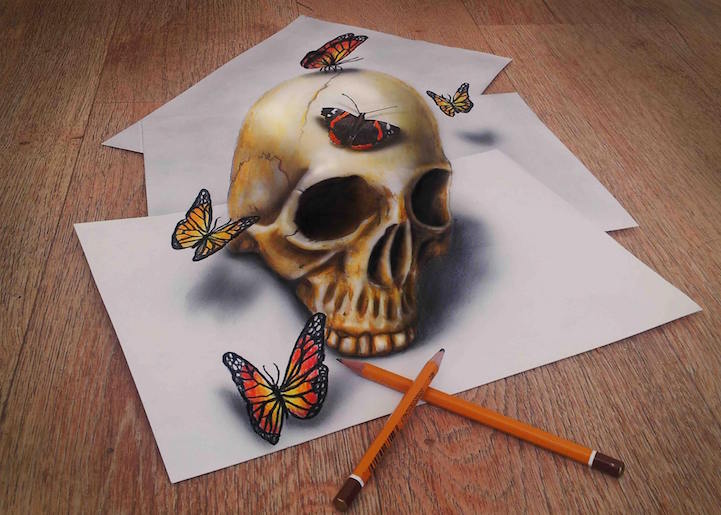 Dutch artist Ramon Bruin, aka JJK Airbrush, is a master at creating optical illusion drawings that blur the line between art and reality. Bruin, who is mostly self-taught, brings his anamorphic drawings to life by photographing them at precise angles, making the subjects appear to pop right off the page. See more, here.

8. Bold Tattoo That Makes You Do a Double-Take by Paul O'Rourke 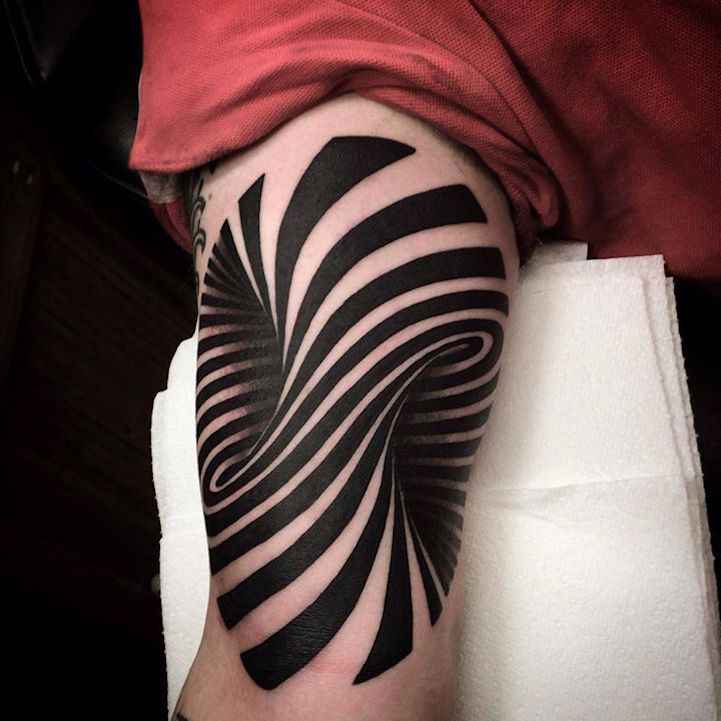 Paul O'Rourke of Allstar Ink in Limerick, Ireland created this clever tattoo that will definitely make you do a double take. The swirling column that's inked on his client's arm appears to dip into two deep crevasses of the skin. From first glance, it seems like you could grab onto the “handle” of this person's lower bicep. See more, here.

Melter 3-D appears to be a continuously moving sphere of liquid metal but, in fact, this amazing sculpture is actually an optical illusion developed by digital artist Takeshi Murata. Recently revealed at Frieze New York 2014, the small chrome sphere sits alone in the corner of a dark room, illuminated by strobe lights from various angles. The lighting is synchronized with rapid spinning to create a hypnotic, repetitive impression of movement. See more, here.

6. Murals Appear as 3D Sculptures Floating in Mid-Air by Odeith 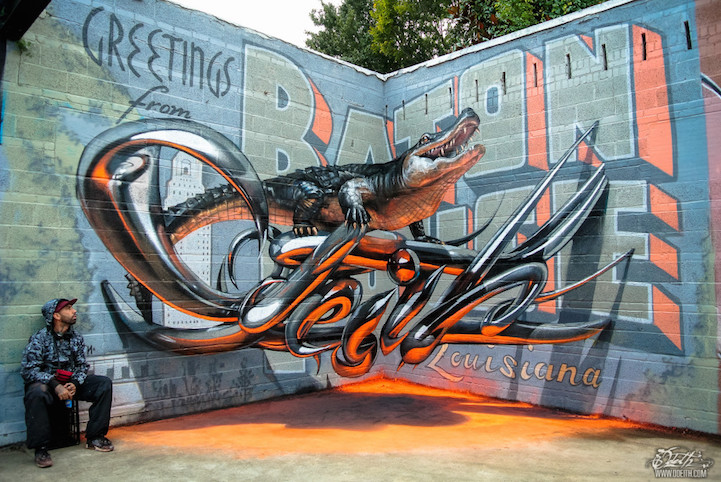 Portugal-based street artist Odeith creates incredible paintings that will fool your eyes into thinking that they're 3D sculptures floating in midair. We've admired his ability to craft this awe-inspiring realism before in a large mural dedicated to Bob Marley. Here, he's used similar shading techniques and an impeccable handling of perspective on the corners of walls. The results are optical illusions of these decorative texts spanning across the space. See more, here. 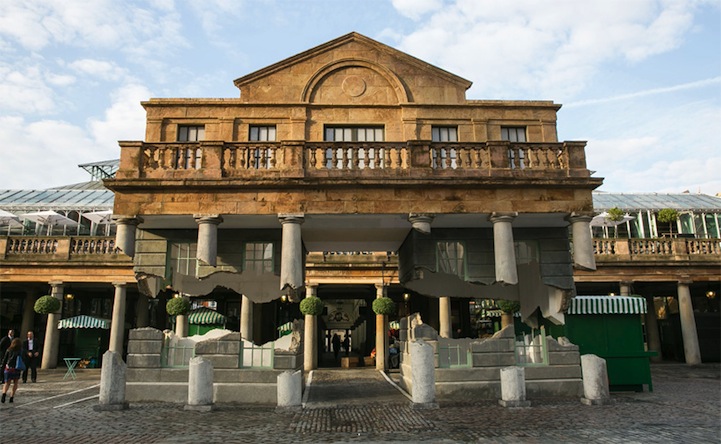 This surreal architectural sculpture, entitled Take My Lightning But Don't Steal My Thunder, is a mind-blowing piece in which a section of a building appears to be levitating in mid-air. Created by British artist and designer Alex Chinneck, the large-scale optical illusion sits directly in Covent Garden in London and was modeled after the original architecture of the184-year old Market Building. See more, here. 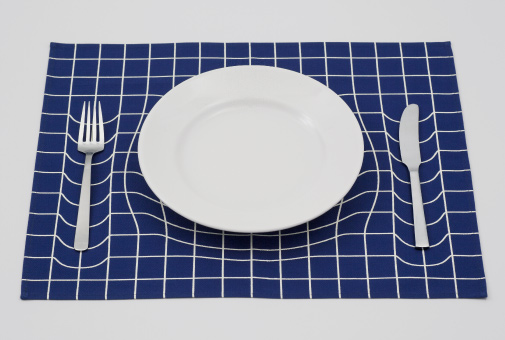 Japanese design studio A.P.Works playfully mimics the imagery of Albert Einstein's space-time fabric theory with this mind-bending placemat. By warping the grid pattern, the trick mat creates the illusion that the plate and silverware are weighing down the placemat's seemingly elastic surface, in the same way that planets and stars distort the plane of space-time. See more, here.

3. Ceramic Sculptures That Look Like Inflatable Toys by Brett Kern 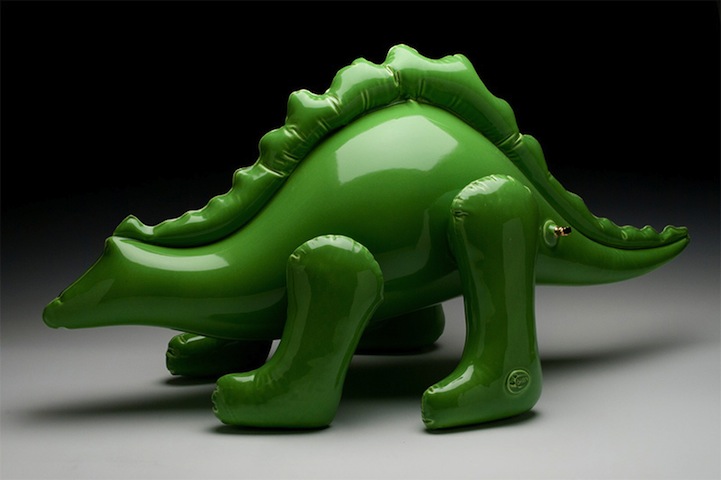 West Virginia-based artist Brett Kern has mastered the art of illusion with handcrafted ceramic sculptures that deceptively look like inflatable toys. Each figure in this ongoing series of work presents a set of whimsically simple characters, be it a minimalist dinosaur or a cartoonish astronaut. See more, here.

2. The Hovering Tree by Mario Schyster

Graphic designer Daniel Siering and art director Mario Schuster (aka Mario Shu) have taken a solitary tree in Potsdam, Germany and transformed it into a split, hovering trunk with nothing more than some paint and tin foil. To create the illusion, Siering and Shu wrapped a section of the tree in foil and proceeded to spray paint it in the likeness of the surrounding environment. From the precise angle, the tree looks as though it is floating in mid-air. See more, here.

1. The Parrot That's Actually a Human Being by Johannes Stroetter 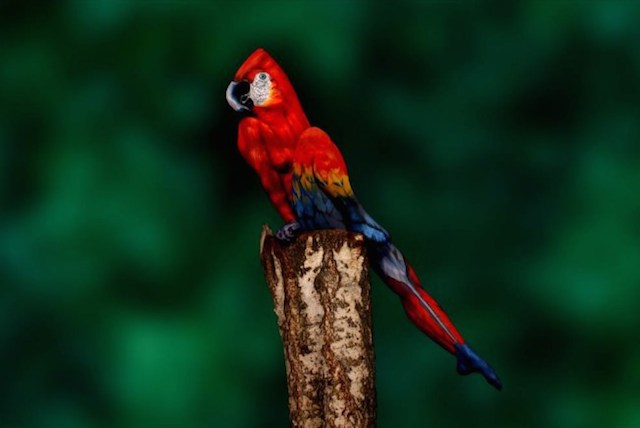 Can you see her? Although this may look like a simple image of a parrot perched on a tree stump, believe it or not, it's actually a photograph of a woman whose entire body has been perfectly painted to resemble the tropical bird. This is the work of fine art body painter Johannes Stoetter, who is an expert at creating intricate body art illusions that look incredibly lifelike. See more, here.