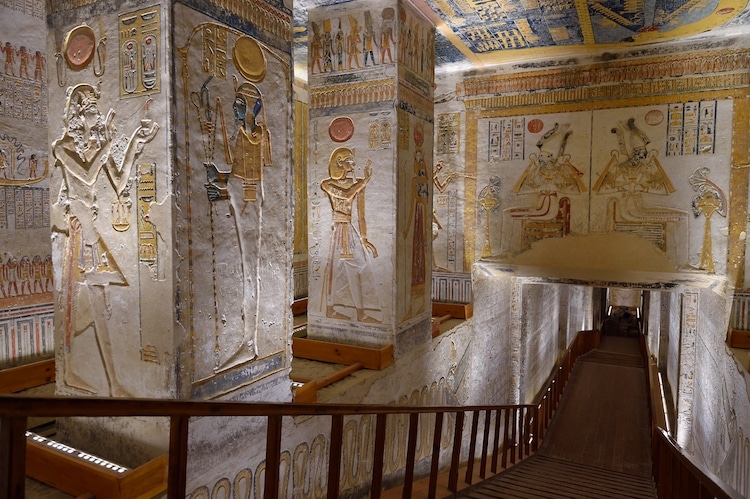 Inside the tomb of Ramses V and Ramsses VI, Valley of the Kings (Photo: Tim Adams via Wikimedia Commons, Attribution 3.0 Unported)

Much of what we know about the ancient Egyptian civilization relates to their incredible preparations for the afterlife. From gold sandals to lavish sarcophagi, remnants of their craftsmanship can be found in museums across the globe. However, to fully appreciate the effect of these opulent burials, you have to see the original tomb. The most famous and elaborate collection of royal tombs is called the Valley of the Kings.

Located outside Luxor, this sprawling necropolis contains over 60 tombs belonging to pharaohs and nobility from the New Kingdom—one of the most prosperous periods in ancient Egyptian history. Among the discoveries made there are the chambers of Tutankhamun, Seti I, and Ramesses II. It even has a counterpart for the wives and relatives of pharaohs called the Valley of the Queens.

Scroll down to learn more about the history and contents of the Valley of the Kings.

What is the Valley of the Kings?

Panorama of Valley of the Kings (Photo: Rolfcosar via Wikimedia Commons, CC BY-SA 4.0)

The Valley of the Kings is a royal necropolis near Thebes (modern-day Luxor) where pharaohs and nobility from the New Kingdom (1539 – 1075 BCE) are buried. It has 63 known rock-cut tombs that are spread across two valleys called East Valley and West Valley. The site was made famous by the discovery of the tomb of King Tutankhamun in 1922 and has remained a key archaeological site for Egyptologists.

History of the Valley of the Kings 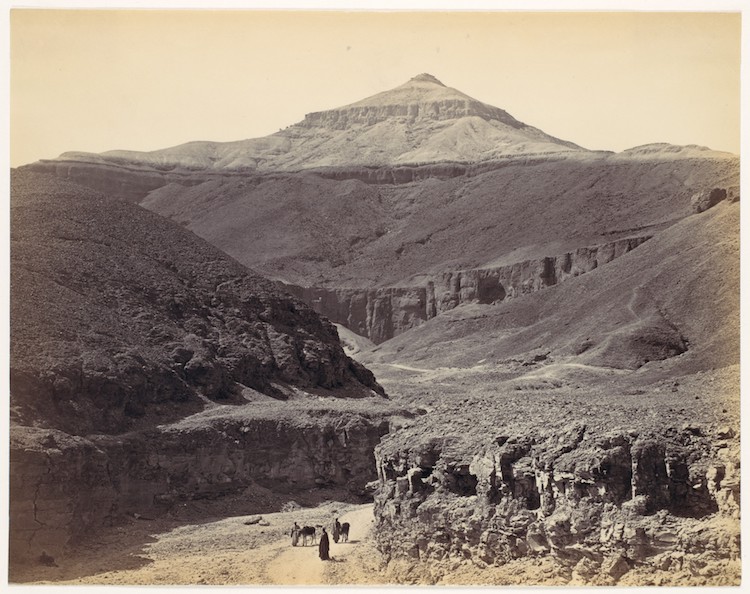 After the reunification of Egypt, the ancient civilization entered the New Kingdom (c. 1550 BCE to c. 1077 BCE); it was a period of incredible wealth and prosperity. It was during this time that pharaohs sought out even more elaborate tombs that would demonstrate their influence. This led the earliest pharaohs to construct the first tombs at the Valley of the Kings.

It was there, behind the Theban Hills, that the pharaohs could create complex structures filled with riches for the afterlife. The particularly remote location of the site was probably a key factor, as it allowed the area to be more easily guarded against robbers.

In ancient times, its official name was The Great and Majestic Necropolis of the Millions of Years of the Pharaoh, Life, Strength, Health, in The West of Thebes, or Ta-sekhet-ma'at (“The Great Field”).

James Fergusson, Illustration of Seti I’s tomb from “A History of Architecture in All Countries” vol. 1, 1887 (Photo: Public Domain via Wikimedia Commons)

The 63 known tombs at the site are all rock-cut tombs, which is a type of architecture that is made directly into a natural rock formation. Each of these varies greatly in size and complexity. Some tombs contain over 120 chambers while others accommodate only one.

Although the earlier tombs tend to exhibit a “bent axis” (in which the corridors turn 90 degrees at least once), the later tombs from the 19th and 20th Dynasties have a much straighter design.

Although the Valley of the Kings was plundered by tomb robbers hundreds of years ago—and therefore removed a majority of precious objects from the site—the interior decoration still demonstrates the power and influence of the pharaohs.

Most of the burial chambers are decorated with scenes from different ancient religious texts, such as the Book of Gates, the Book of Caverns, and the Book of the Earth. The purpose of this art was to help the person on their journey to the afterlife. 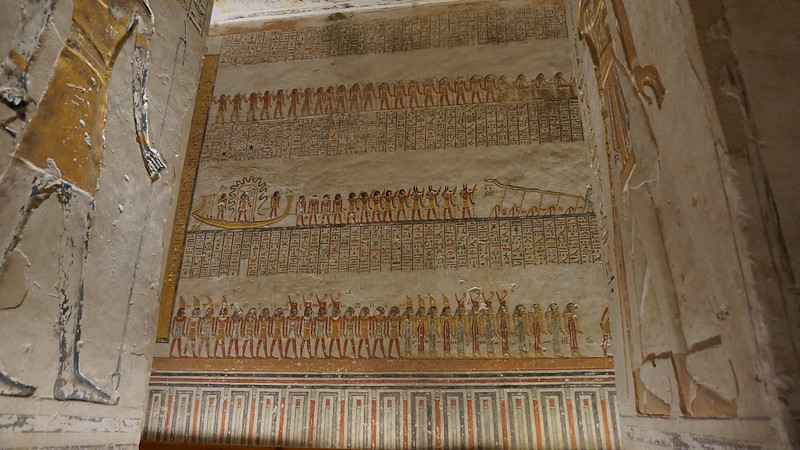 The East Valley is where the majority of the tombs at the Valley of the Kings are located.

The largest tomb at the site belongs to the sons of Ramesses II (1303 – 1213 BCE). Although it is only partially excavated, it is believed that at least four of the pharaoh's estimated 52 sons were buried at this location. As of 2006, it has 200 corridors and chambers, making it the most complex structure in the area. However, like most of the tombs, it has also been robbed of most of its funeral decoration. 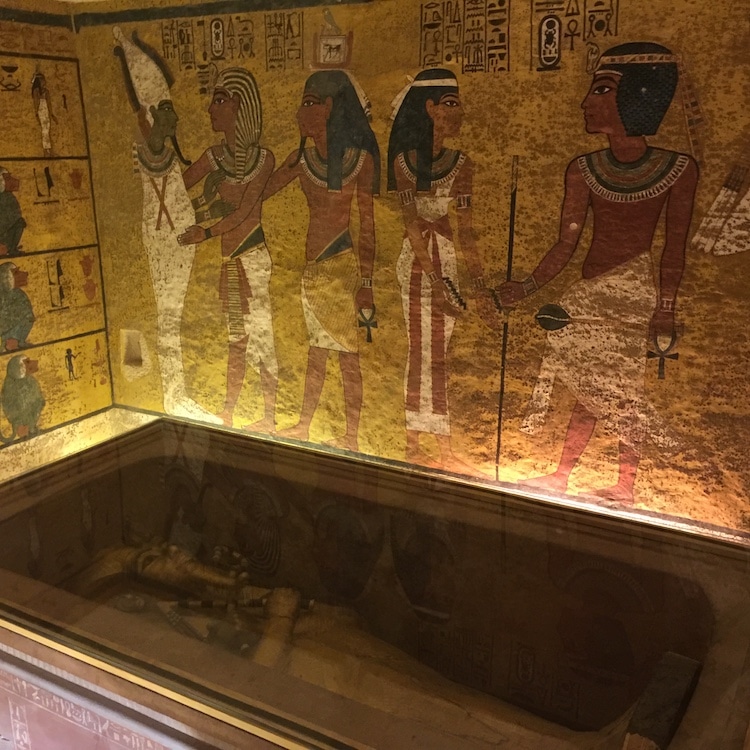 Although Tutankhamun's tomb is by far the most famous, it is actually quite small in size. Egyptologists speculate that due to the young king's premature death at about 18 or 19 years old, his body was most likely moved to an unplanned location. Regardless, the tomb remains one of the most important discoveries in Egyptology due to the vast collection of artifacts that were discovered inside.

There are only four known tombs in the West Valley, so it is much less visited by tourists. 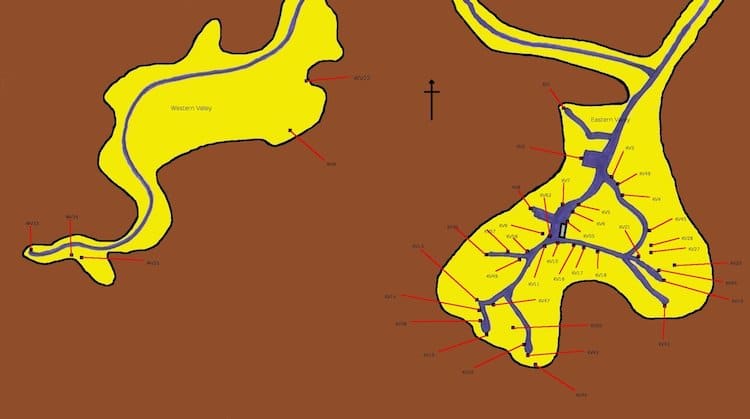 Map of Valley of the Kings (Photo: Markh via Wikimedia Commons, Public Domain)

The tomb of Amenhotep III not only housed the pharaoh but also had two subsidiary burial chambers for his wives, making it rather unusual compared to the others.

Valley of the Queens 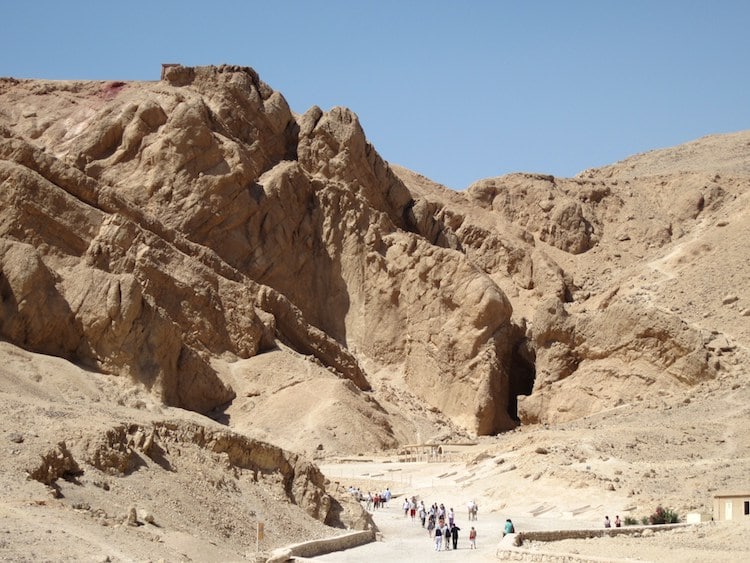 Photograph of Valley of the Queens (Photo: Olaf Tausch via Wikimedia Commons, CC BY 3.0)

Near the Valley of the Kings is a burial site for the wives of the pharaoh called the Valley of the Queens. Like its male counterpart, this necropolis is made up of rock-cut tombs, of which there are over 100. The most well-known of these is the tomb of Queen Nefertari, who was the wife of Ramesses II. 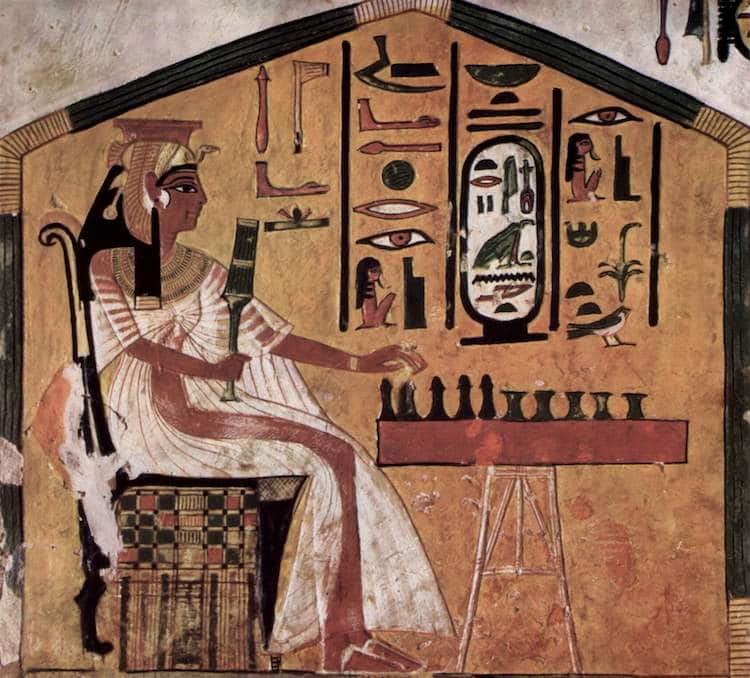 Mural inside the tomb of Nefertari, Valley of the Queens (Photo: The York Project via Wikimedia Commons, Public Domain)