In the center of Seoul's version of Times Square, a giant wave appears as though it could crash down upon the masses at any minute. But what's actually happening is an incredible anamorphic illusion by South Korean digital design firm d'strict. By merging art and technology, they're expertly creating an immersive and entertaining experience.

In the past, d'strict has worked with holograms, projection mapping, and much more to bring a K-pop theme park and other spectacles to life. Now, they have tackled South Korea's largest digital advertising screen with their installation Wave. A massive 80.9-meter wide by 20.1-meter high (265′ x 65′) screen is the canvas for their work and they take full advantage of the space.

By projecting massive waves onto the screen, they've created the illusion that the water could burst the glass at any moment and spill onto the sidewalk. The effect is both thrilling and mesmerizing. As the waves hypnotically crash into the glass over and over again, it's impossible to look away.

The large digital billboard was installed in 2018 to develop the Coex K-pop Square in Seoul's Gangnam District. Typically, K-pop videos are projected on the wraparound screen of the Coex Atrium, but this heart-stopping makeover is sure to garner just as much attention.

In the Times Square of South Korea, it looks like a giant wave is about to break out of a giant aquarium. 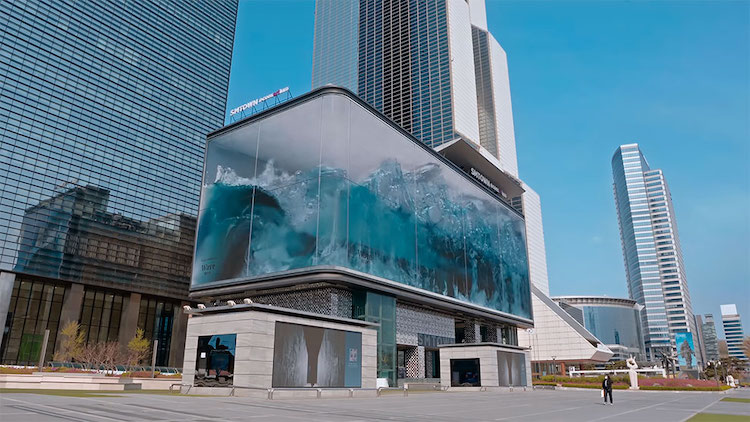 In actuality, Wave is a giant anamorphic illusion created by design firm d'strict.