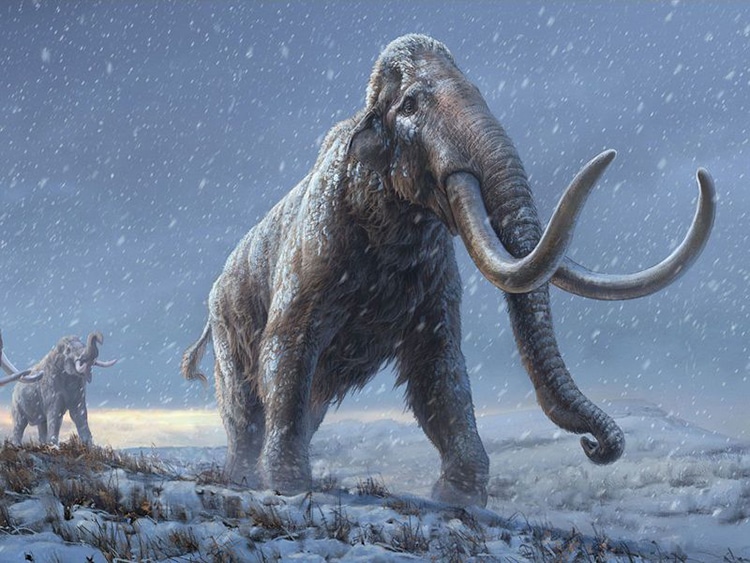 An artist rendering of a steppe mammoth. (Photo: Beth Zaiken/Centre for Palaeogenetics)

The study of paleogenetics has a lot to teach us about the evolution of life on Earth. Until recently, the oldest DNA extracted and studied was that of an Ice Age horse found in Canadian permafrost and dating back about 700,000 years. Recent work by the Centre for Palaeogenetics in Stockholm, Sweden has taken a startlingly large leap forward and set a new record for the oldest DNA ever sequenced. In a paper published in Nature, the researchers announced their sequencing of mammoth DNA thought to be at least 1.2 million years old. This exciting news also included the discovery of an entirely knew species of mammoth, likely a precursor to the Mammuthus columbi which roamed prehistoric North America.

Led by Dr. Tom van der Valk, the team used samples of mammoth teeth found in northeastern Siberia. Three separate samples were analyzed—the oldest was the Krestovka mammoth, followed by the Adycha mammoth, then the youngest Chukochya mammoth. The “youngest” mammoth—at only 500,000 to 800,000 years old—alone would have set the record for the oldest DNA to be sequenced. However, the Krestovka specimen was found to date to about 1.2 million years ago, based on the geological deposits nearby. According to its mitochondrial DNA, the animal may have lived as long ago as 1.65 million years. All three specimens are much older than the “classic” woolly mammoth, which roamed Eurasia beginning about 700,000 years ago.

To process the DNA of their three mammoth specimens, the team had to reconstruct heavily degraded genetic sequences. DNA is formed in strings of base pairs, but after a creature dies, these strings begin to break apart into smaller and smaller fragments. The researchers described their challenge as assembling a jigsaw puzzle. “The more puzzle pieces you have, the harder it is to reconstruct the whole puzzle,” explains Dr. van der Valk. This task was complicated by the presence of degraded DNA from other organisms such as bacteria. However, the team used clearer mammoth profiles from more recent specimens as well as the DNA of modern elephants to guide their reconstruction.

This DNA is the oldest sample to be sequenced in what amounts to an enormous leap forward for paleogenetics. The team's research is also historic for its discovery of a new species of prehistoric mammoth. The youngest sample is one of the oldest examples of the famous woolly mammoths (Mammuthus primigenius). The middling mammoth, however, is a known ancestor of the woolly creatures. Known as the steppe mammoth, its scientific name is Mammuthus trogontherii. The eldest sample, known as the Krestovka mammoth, is genetically distinct from the other two. Once reconstructed, this sample proved to be a previously unknown mammoth species.

The DNA of the Krestovka sample has been added to the known genealogy of mammoth species. The researchers announced that through comparisons, they also discovered that the Columbian mammoth of North America (Mammuthus columbi) is a hybrid of the woolly mammoth and this newly discovered Krestovka variety. The Columbian mammoth roamed from about 11,000 to 1.5 million years ago. This genetic mix implies a global family tree of the large beasts. American Museum of Natural History Paleontologist Ross MacPhee (who was not involved in the study) told Smithsonian Magazine, “It suggests that mammoths in the Old and New Worlds acted as a hugely distributed metapopulation.”

This “mammoth” discovery (pun intended) suggests that paleogenetics has the possibility to rewrite our knowledge of many prehistoric creatures, including the ancestors of modern humans.

The DNA also proves that the mammoths of prehistoric North America are a hybrid of the new species and woolly mammoths.