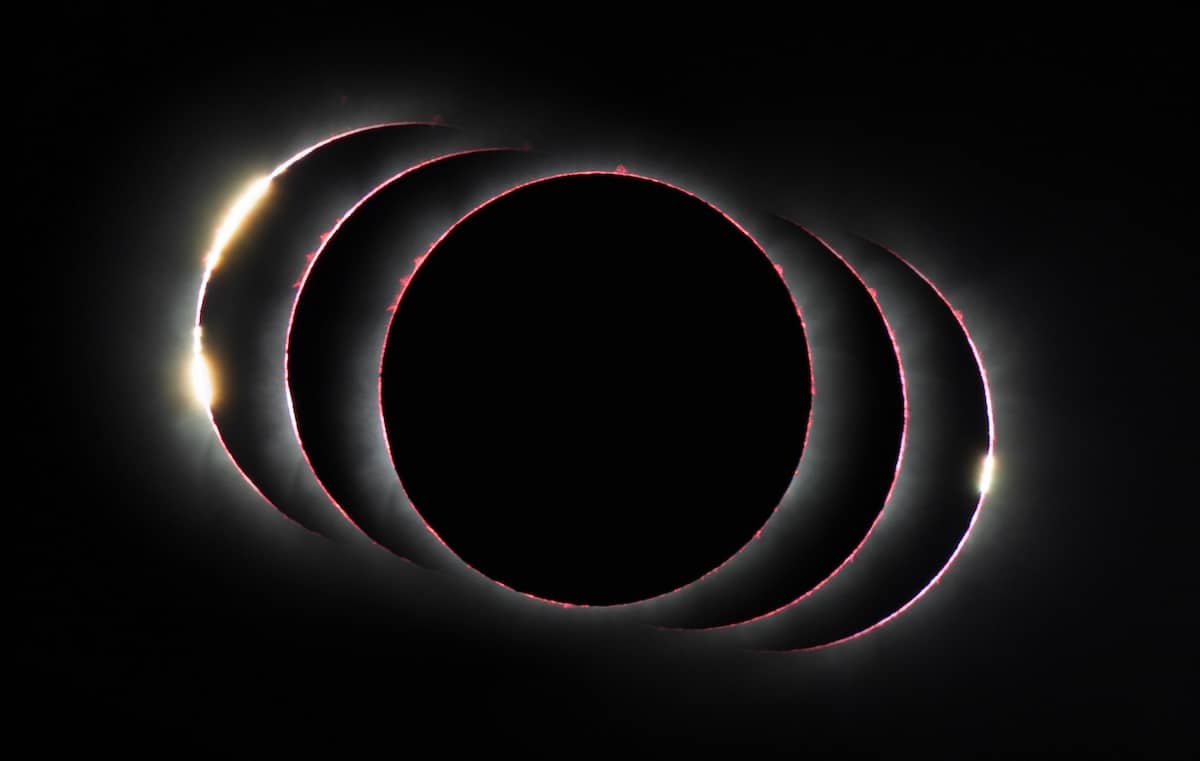 “Three diamonds in the sky” by Petr Horálek. Overall winner and Astronomy winner. “A story about the total solar eclipse on November 3rd, 2013. When the eclipse started (on the left side of the image), there were twos part of a diamond ring, which was unusual. It is caused by the angle diameter of the Moon in this case of a hybrid eclipse. The magnitude of coverage from Pakwero, Uganda, was just 1,00259, which means the Sun photosphere could easily shine above two different locations of the lunar limb at the same time. The next hybrid solar eclipse will occur in April 2023 over western Australia and Indonesia.”

For the fourth year, the Royal Society Publishing Photography Competition pays homage to the men and women who use photography to help communicate the beauty of science. The 2018 winners of the photo competition all encounter incredible events, whether it be during a solar eclipse or while studying insects under a microscope. Now, their work can be enjoyed by a wider audience as a way to embrace all aspects of the scientific world.

Petr Horálek was selected as the overall winner for his image of a very rare natural occurrence. Horálek was in Uganda when he photographed three photospheric “diamonds” and a ring of solar chromosphere around a rare hybrid solar eclipse that took place in 2013. The striking photograph demonstrates just how much being in the right place at the right time can matter, as the next hybrid solar eclipse won't happen until 2023.

“During an unforgettable expedition to Pokwero, Uganda, I captured an incredibly short and unique hybrid solar eclipse,” shared Horálek. “Just three minutes before the 19 second total eclipse, the stormy sky around the sun miraculously cleared up and allowed me to see this spectacular show, of which there is only roughly a 13% chance to successfully observe this phenomenon per century, considering its rare occurrence but also average weather conditions during these particular phenomena.”

Photographers submitted their work to five categories—Astronomy, Behavior, Micro-imaging, Earth Science, and Ecology and Environmental Science. As a whole, the winners and runners-up give a well-rounded view of the different facets of the scientific world.

Launched in 2015, the photo contest is a collaboration between all the journals in the Royal Society's publishing portfolio and is judged by an esteemed panel of experts from their editorial boards.

The winners of the 2018 Royal Society Publishing Photography Competition celebrate the glory of science. 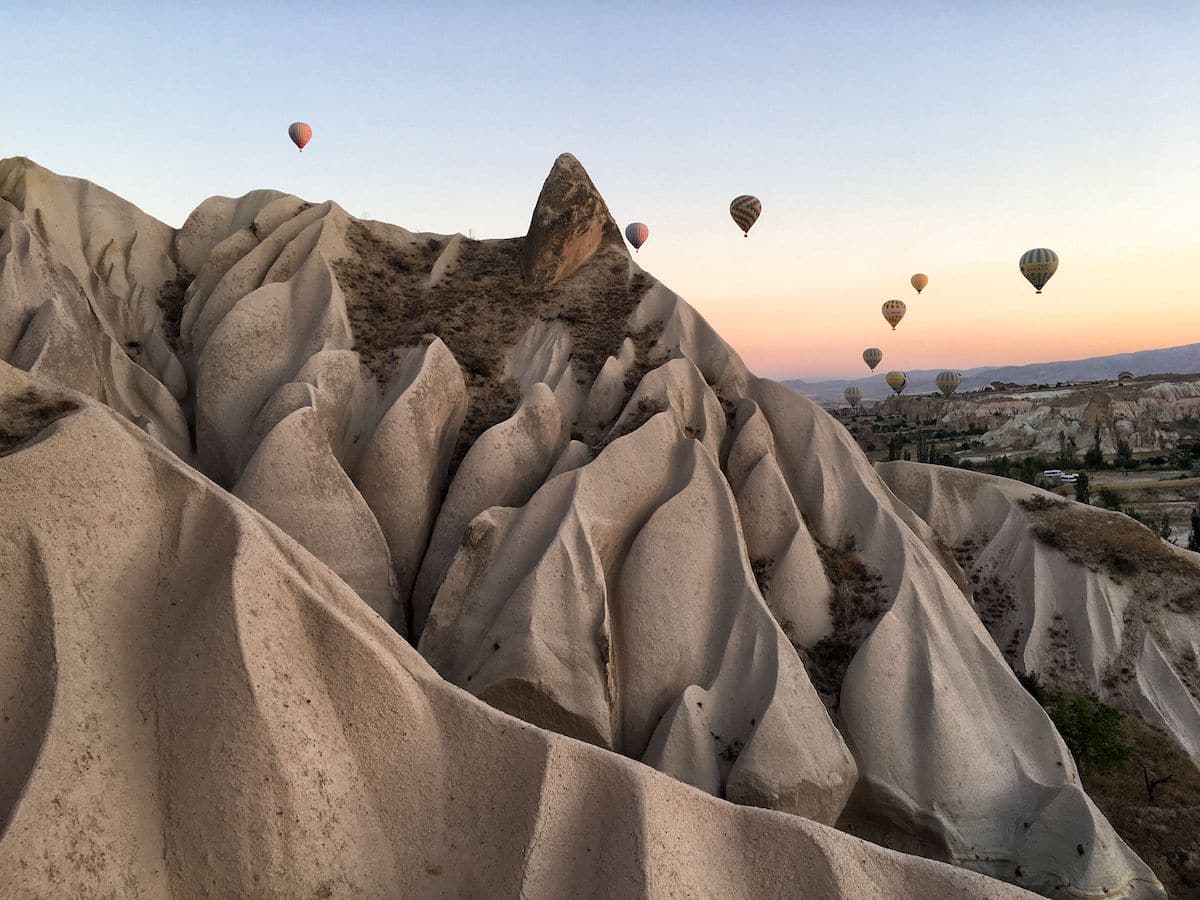 “Cappadocia, Turkey: Born of Fire, Earth, Air, and Water” by Katharine Cashman. Earth Science, winner. “This photograph highlights the volcanic landscape of Cappadocia, Turkey. It was created by a volcanic eruption (fire), is made of volcanic ash (earth), and has been sculpted by wind (air) and water… the view is from a balloon.” 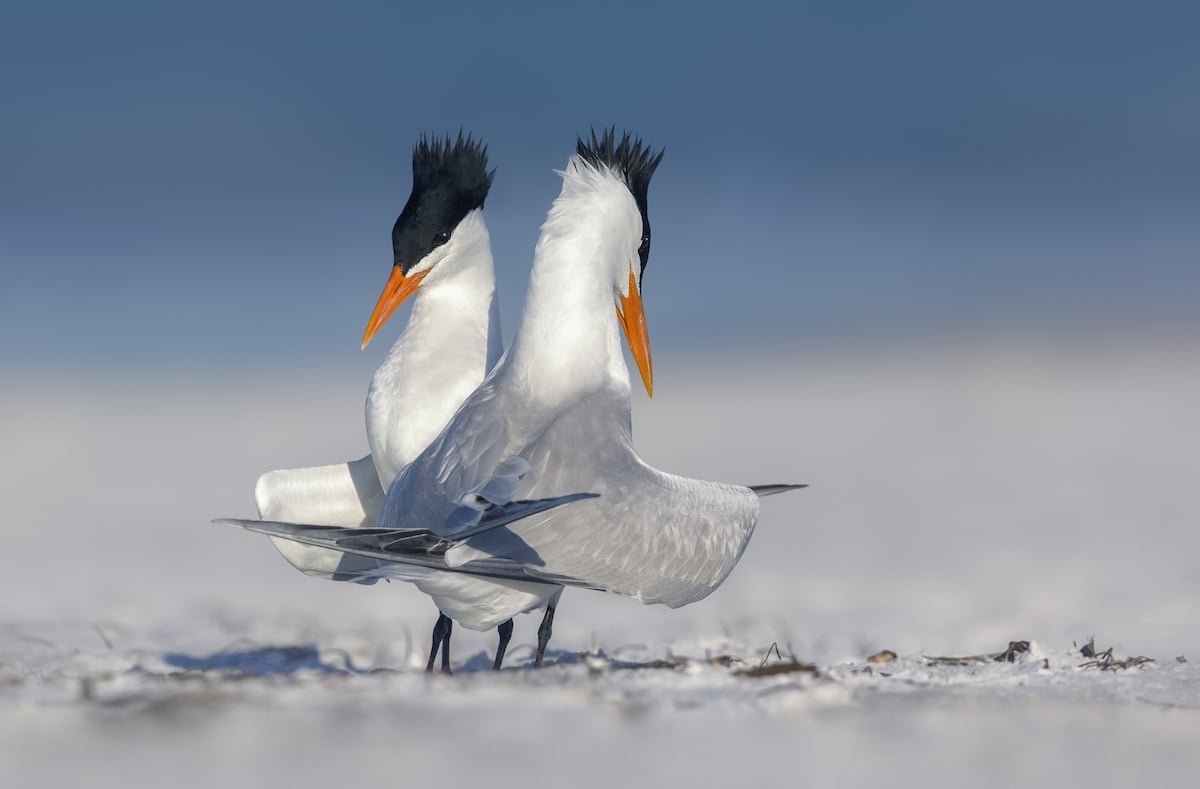 “Courting Royals: two Royal Terns in courtship display” by Kristian Bell. Behavior, winner. “Another beautiful morning on a beautiful beach on the Gulf Coast of Florida seemed to prompt these two Royal Terns to commence an intricate courtship dance. Just out of shot are another 20 or so terns sitting idly by and watching the loved-up pair in action.” 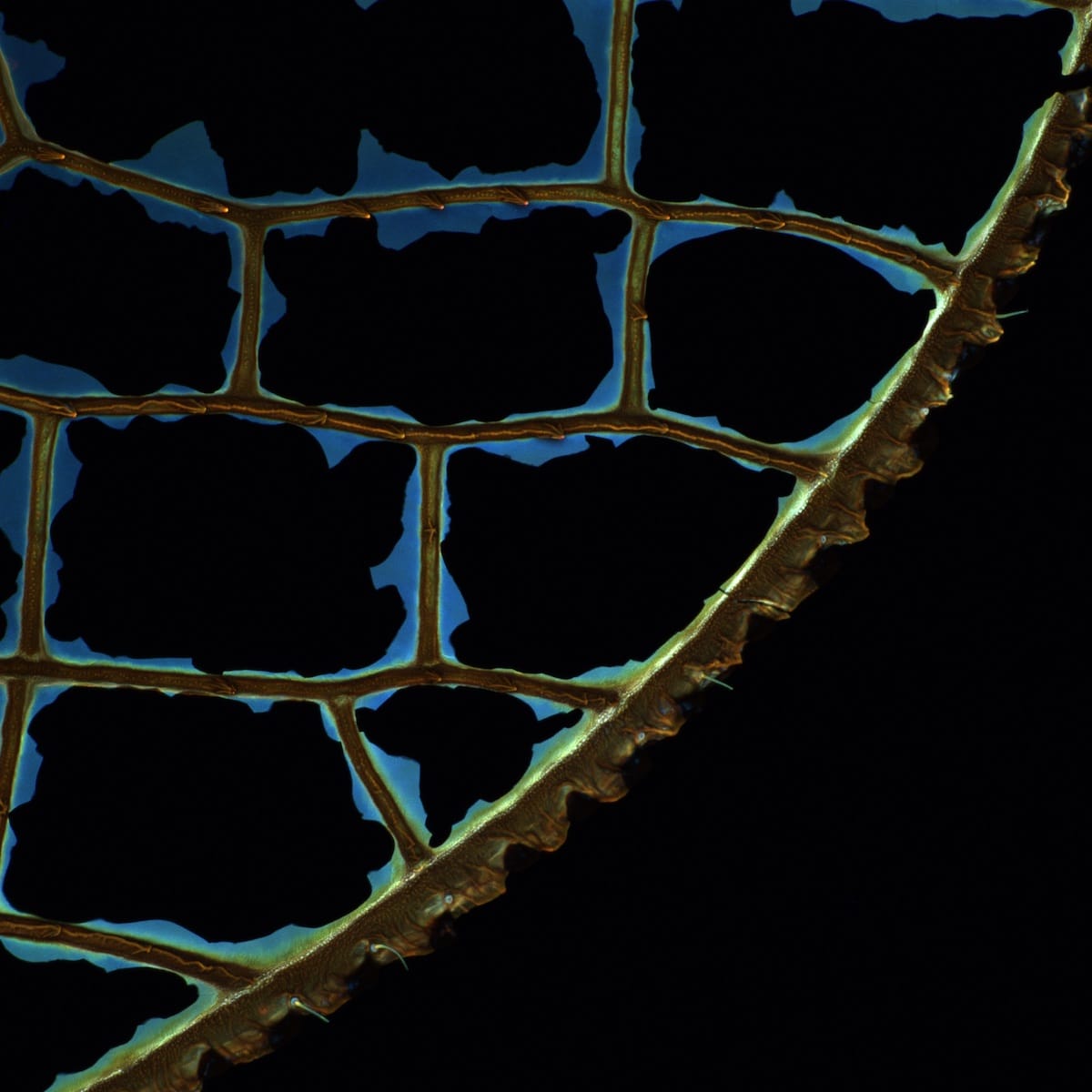 “Broken window” by Dr. Hamed Rajabi. Micro-imaging, runner-up. “Wings experience substantial accidental collisions during the life span of flying insects. Such collisions often result in irreversible wing damage and, therefore, could significantly influence insect flight ability. In order to investigate the material composition of wings of the dragonfly Acisoma panorpoides, I used confocal laser scanning microscopy (CLSM).
During the scan, I observed no autofluorescence from the wing membrane. This was very odd, because membranes are known for their blue autofluorescence when subject to laser light. Interestingly, after the scan I found out that wing membranes were all broken. I call this image as ‘broken window'.” 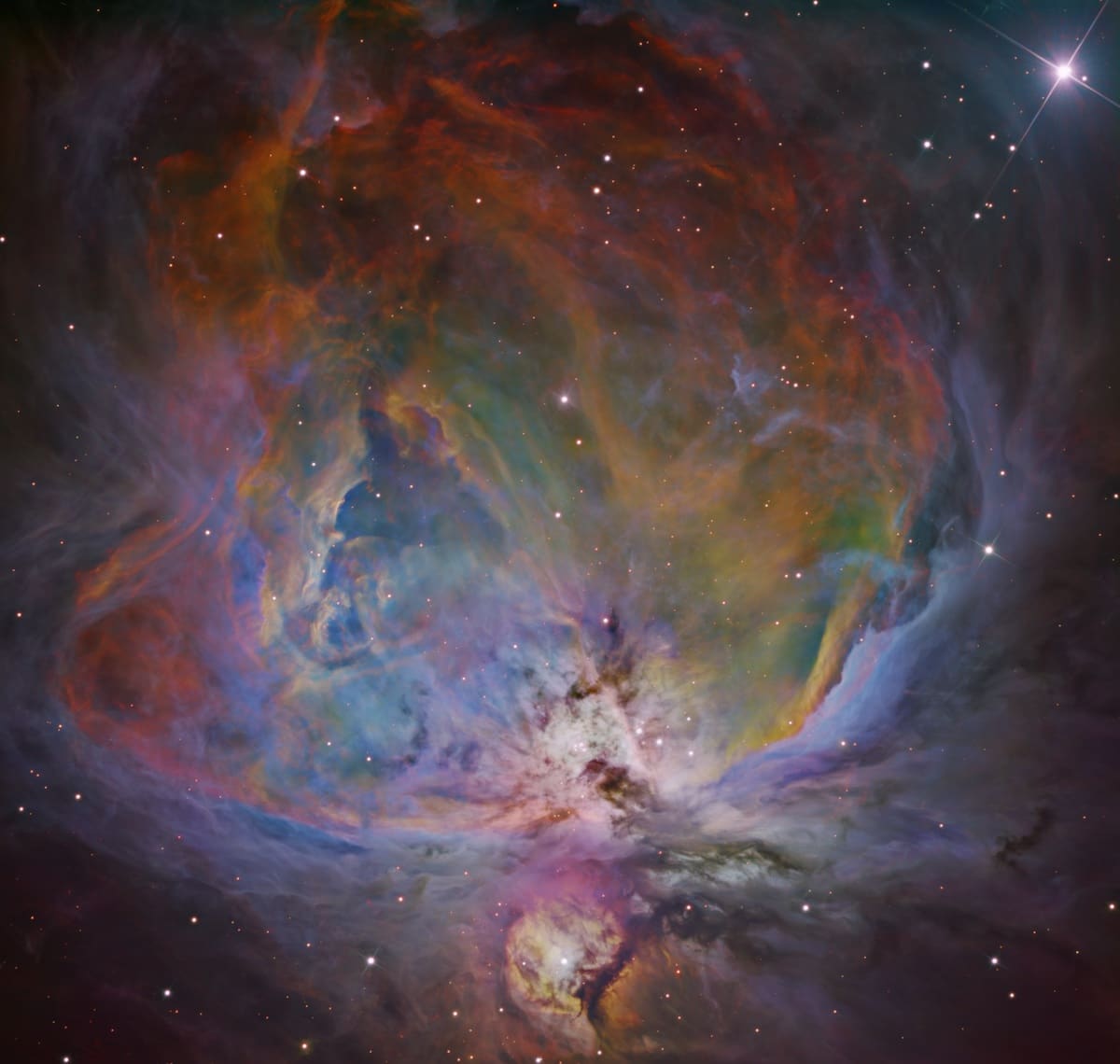 “The Orion Nebula” by Bernard Miller. Astronomy runner-up. “This is an image of the Orion Nebula processed with a 6-filter color mapping process. This process combines data from six different filters (Red, Green, Blue, Ha, SII, and OIII). The resulting image contains detail and color not usually seen with the normal RGB processing. This image is a combination of over 39 hours of exposure taken with a CDK-17 telescope and FLI Pl16803 camera over a span of six weeks in November and December of 2017.” 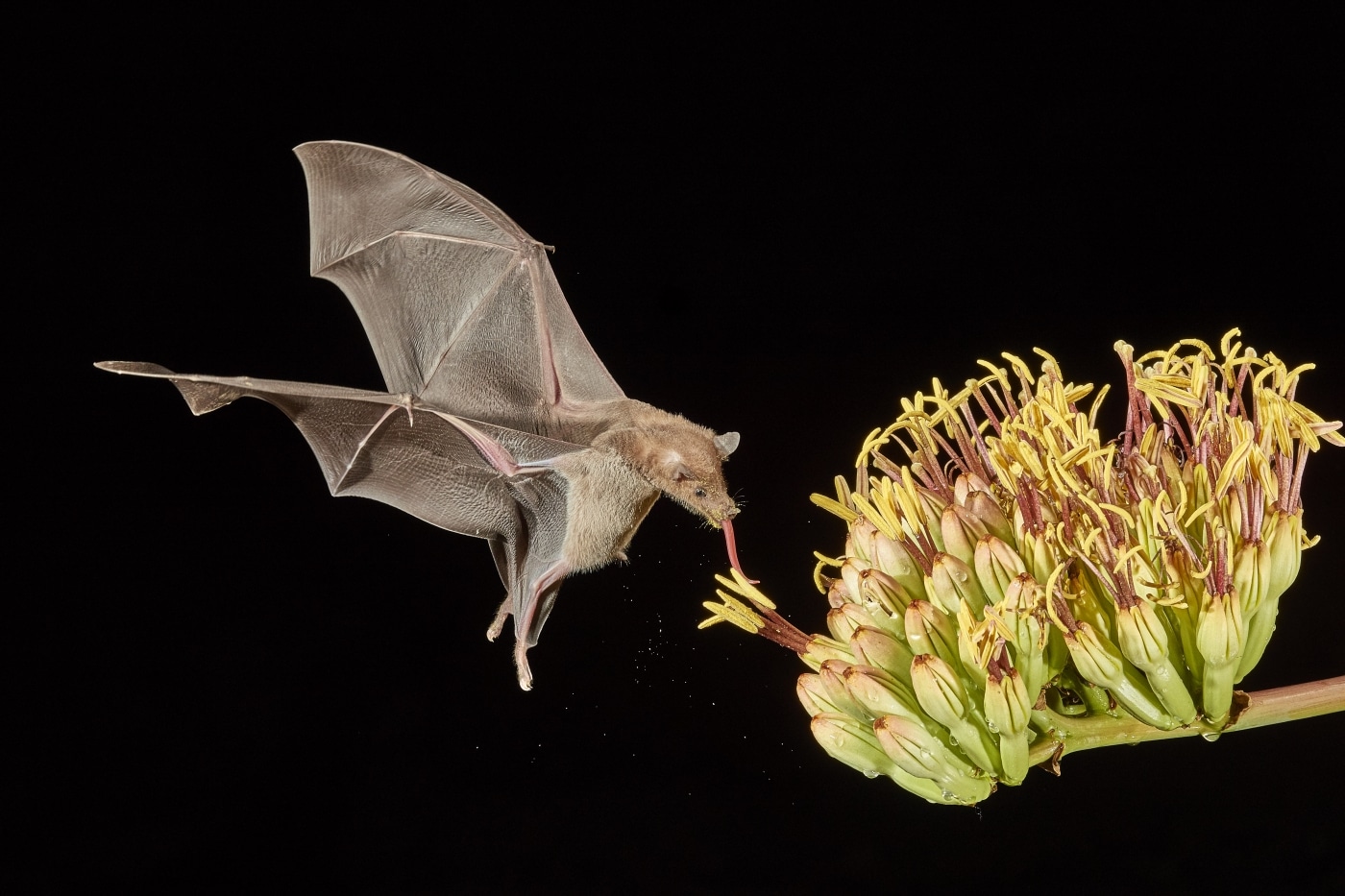 “Plant trees and stop disease emergence” by Professor Peter J Hudson FRS. Behavior, honorable mention. “In recent years, bats have appeared as disease reservoirs of significant emerging diseases, such as Ebola, Hendra, Nipah, SARS and Middle East Respiratory Syndrome. The pressing issue we face in protecting people and livestock from these novel infections, is why does spill over (the passage of a virus from wildlife to humans) occur and why is it increasing? We have been studying Hendra virus on the east coast of Australia where the virus passes from flying foxes to horses and then to humans who suffer a 60% case fatality rate.
Our recent work is now showing that spill over occurs in winter when the winter flowering eucalyptus trees fail to produce nectar, and this situation has been exacerbated by deforestation. In these harsh conditions, the starving bats move away from their traditional camps and seek fruit trees planted in horse paddocks where they infect the horses. There has been much controversy in Australia with attempts to burn down bat roosts and kill the bats. From our research it would appear the solution is to rewild parts of Australia by planting 5 species of tree at specific locations so the bats do not starve and spillover will cease. This will also retain bats and the integrity of the ecosystem. If we extrapolate out our hypothesis then we may obtain a deeper understanding of how Ebola and other infections emerge following deforestation in west Africa, often associated with palm oil plantations. Plant trees and protect people from disease.” 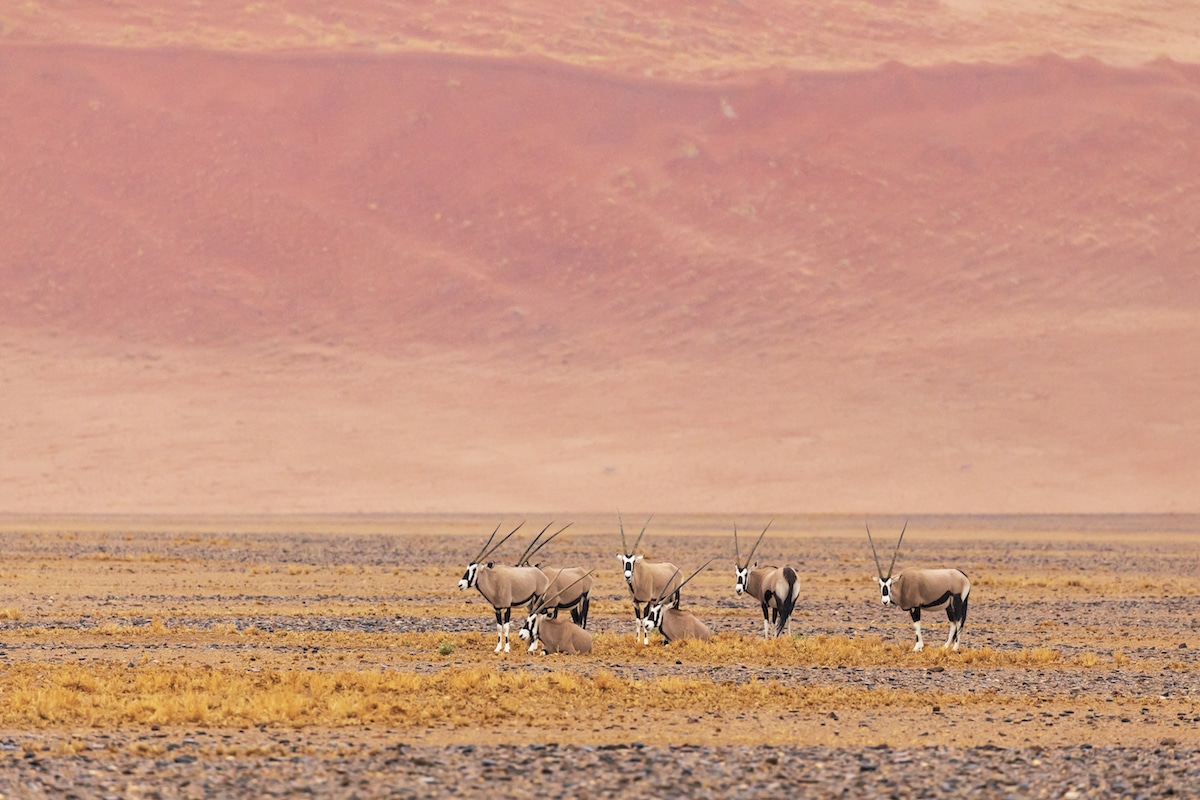 “Mars” by Roberto García Roa. Ecology and Environmental Science, runner-up. “When I observed these Oryx resting in an arid place of Namibia, my mind immediately saw a group of antelopes on the surface of Mars. The landscape was arid and red and it evoked a distant planet where we were invaders. They were powerful animals that showed a peaceful moment in a hard place. The ability of this species to resist hard environmental conditions is really surprising and deserved my attention, so I decided to immortalize the moment in my brain and in my ‘photography' remembers.” 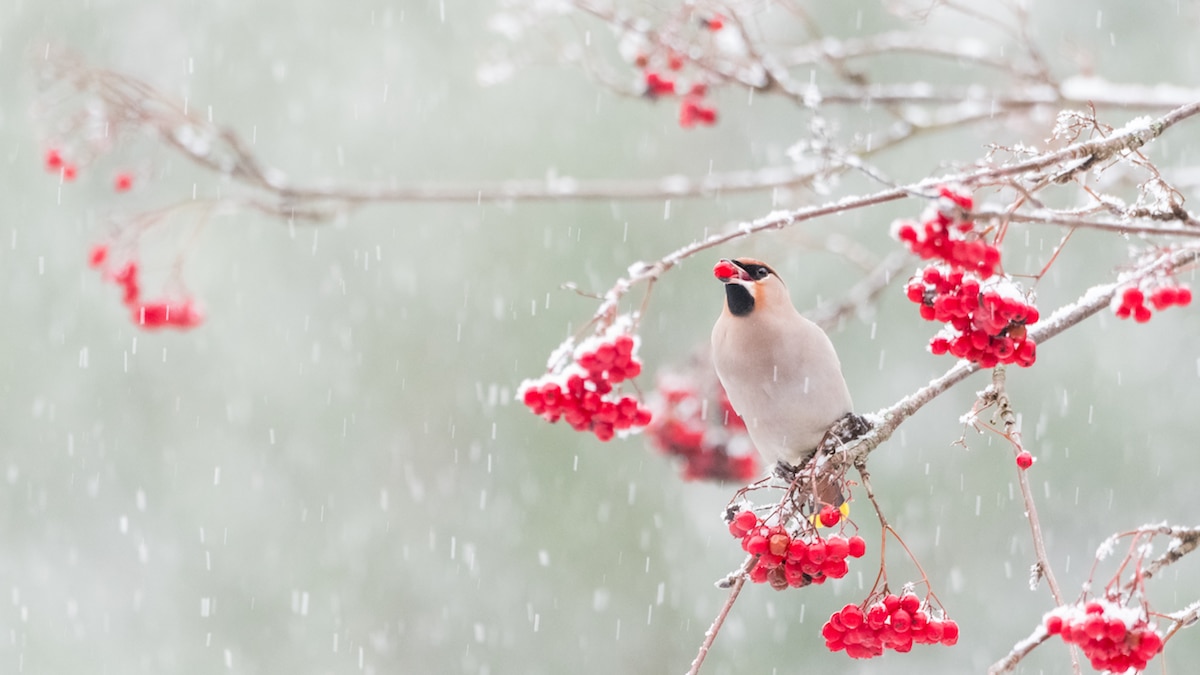 “Waxwing and Rowan berries in the snow” by Alwin Hardenbol. Ecology and Environmental Science, winner. “Bohemian waxwings (Bombycilla garrulus) lust after Rowan berries (Sorbus aucuparia) in winter. They fly around in big flocks looking for the most delicious berries but they are picky eaters and do not just go for any berry. They skip certain trees and postpone eating the berries in others for later. Eventually, however, they did come to the trees right outside my office in Finland.” 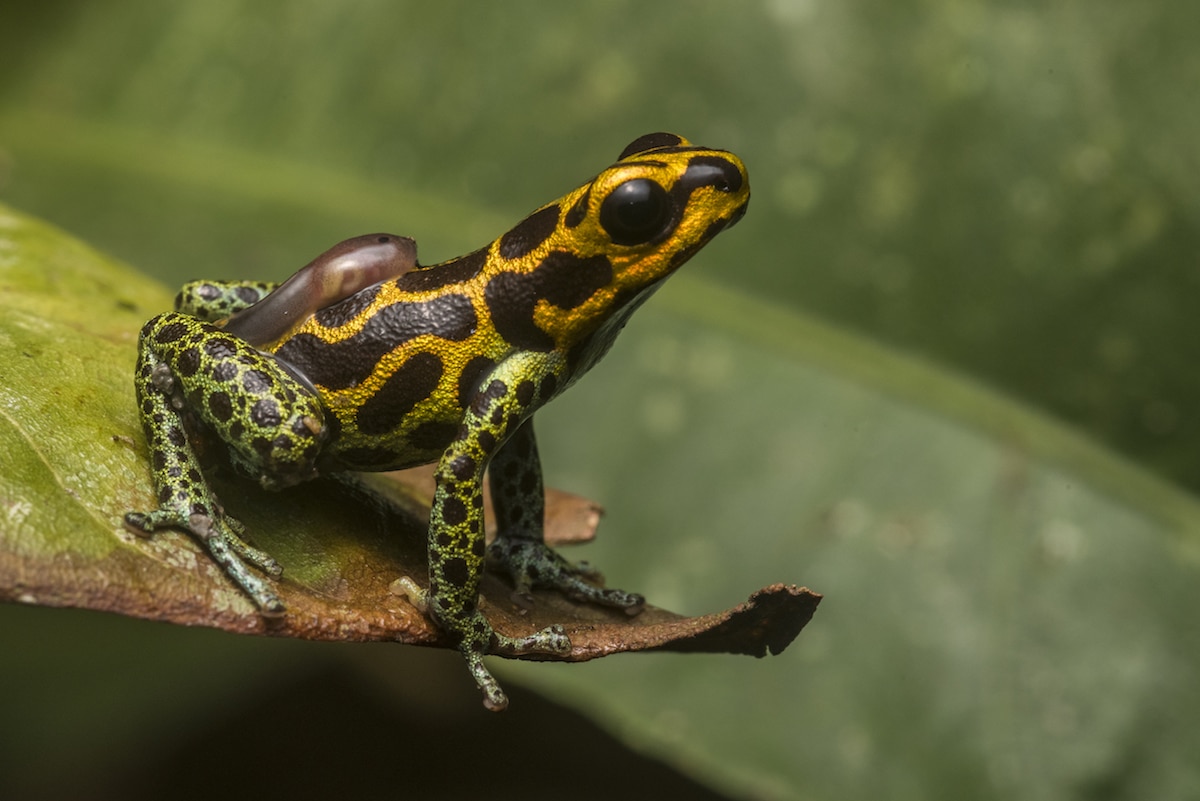 “Baby on board” by Anton Sorokin. Behavior, runner-up. “Parental care is a behaviour typically associated with birds and mammals, it is comparatively rare in other taxa such as amphibians. However, some amphibians are very devoted parents, the poison frogs (Dendrobatidae) are a great example. This species is the mimic poison frog (Ranitomeya imitator), which exhibits obligate biparental care. Here, the male transports the tadpole on his back, he will soon deposit it in a small pool of water. Afterwards, he will check back and when the tadpole signals hunger, the male with go fetch the female who will lay an unfertilized egg for the tadpole to eat in a behavior called trophic egg feeding. This will continue until the tadpole metamorphoses into a froglet. This high level of parental care means that the parent frogs must both be wholly invested in raising their offspring, which may be why this is currently the only species of frog known to be genetically monogamous.” 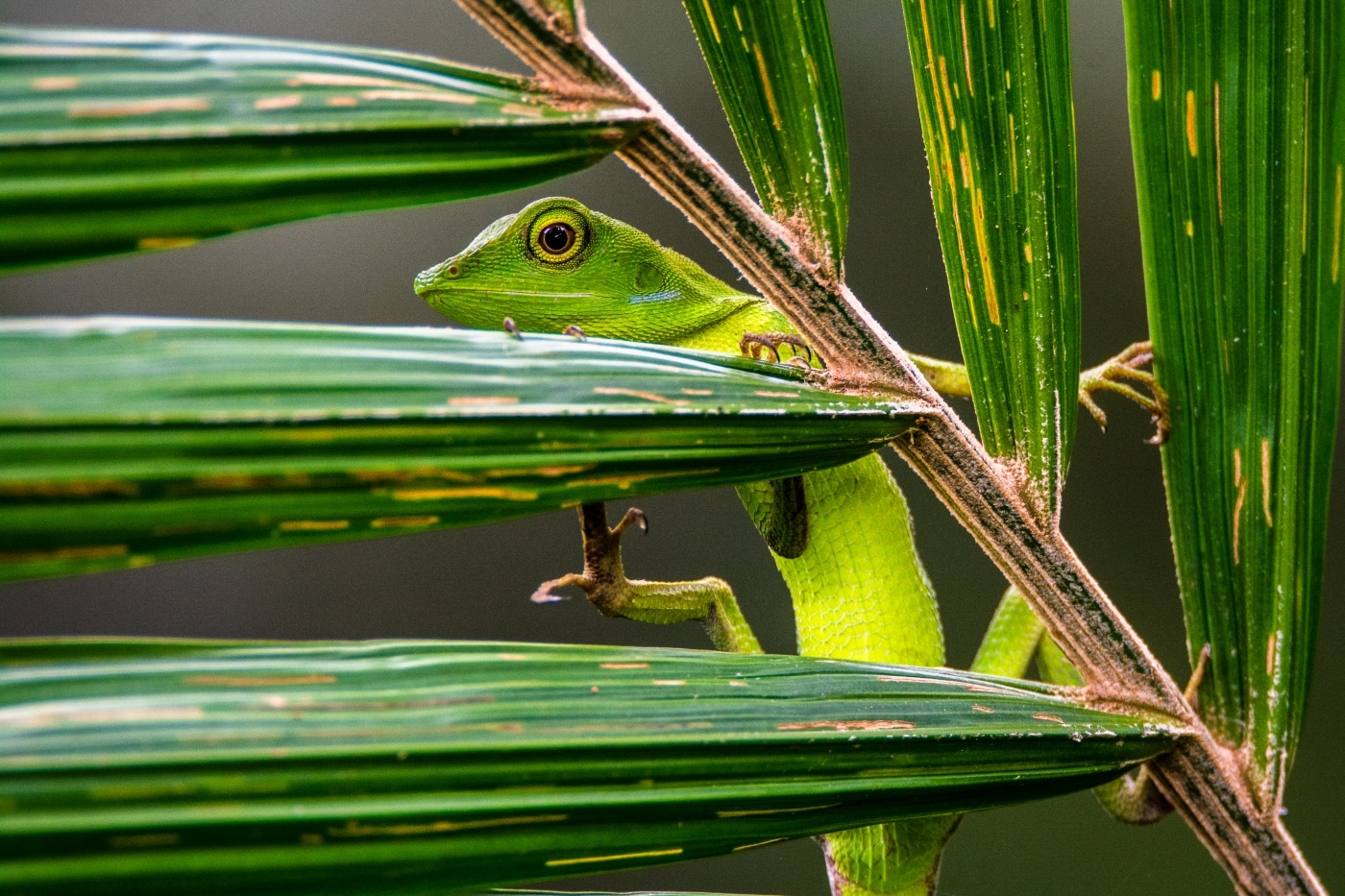 “Peek-a-boo” by David Matthews. Ecology and Environmental Science, honorable mention. “As I walked along the canopy walkway in Taman Negara, Malaysia, I heard a rustling in the palm fronds to my left. I began to wonder what I would find up in this 90 ft. rainforest canopy, possibly a bird or a monkey, when this female green crested lizard (Bronchocela cristatella) popped its head over the palm frond. You can see in this picture how this arboreal species has adapted to life in the trees. It's long slender fingers allow it to grip the leaves and its thin body reduces the weight that it needs to lift as it climbs around. It was really interesting to return to the ground and see other lizards, noticing how divergent these species were despite living in such close proximity.” 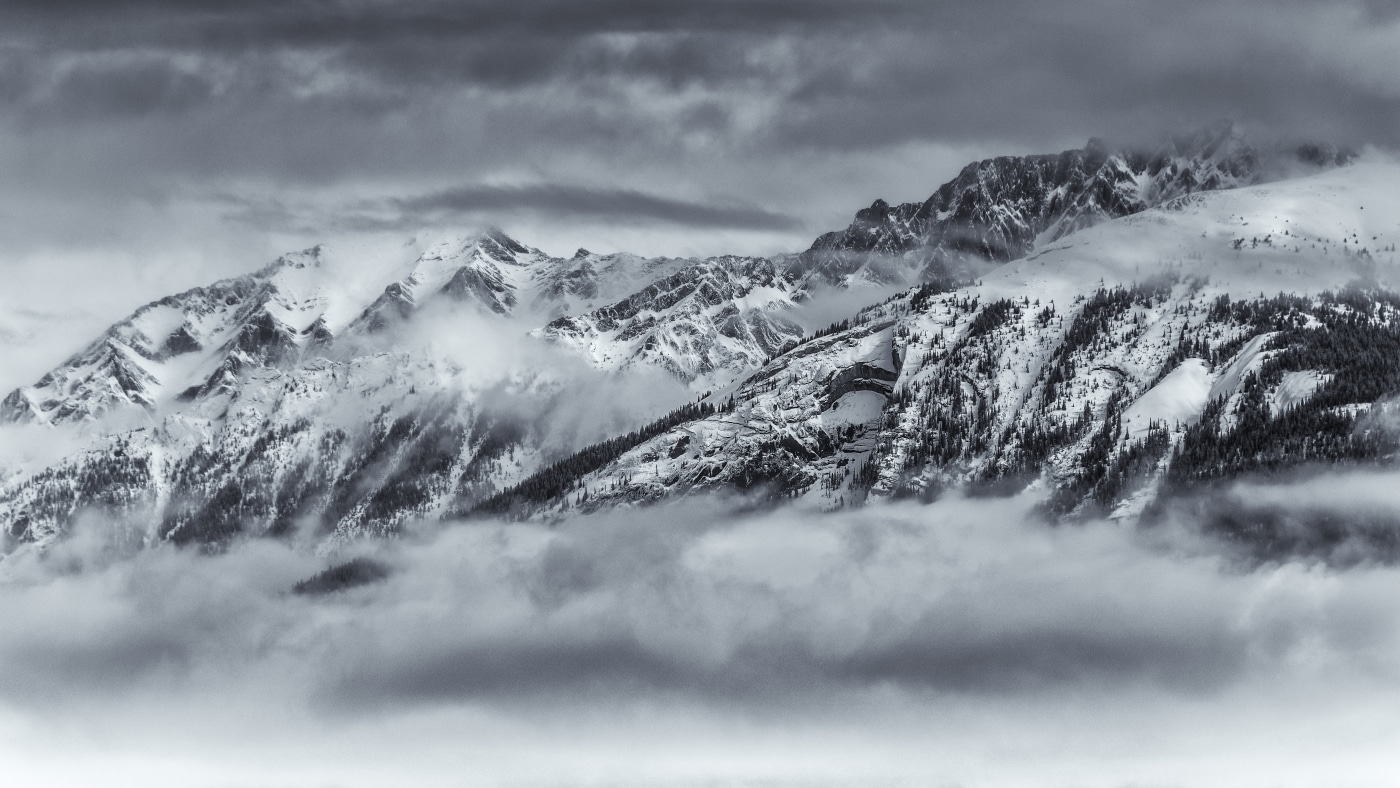 “The Maligne Range from Jasper, Canada” by Dr. David Rippin. Earth Science, honorable mention. “I am a glaciologist and in 2017 I was in Canada on a research sabbatical, working on the glaciers of the Columbia Icefield in the Rocky Mountains. This image was shot in Jasper National Park on my first to the Rockies, just a few weeks into my sabbatical. The landscape here is dominated by mountains and forests, and in the early season, a lot of snow. It is undeniably beautiful and awe-inspiring.” 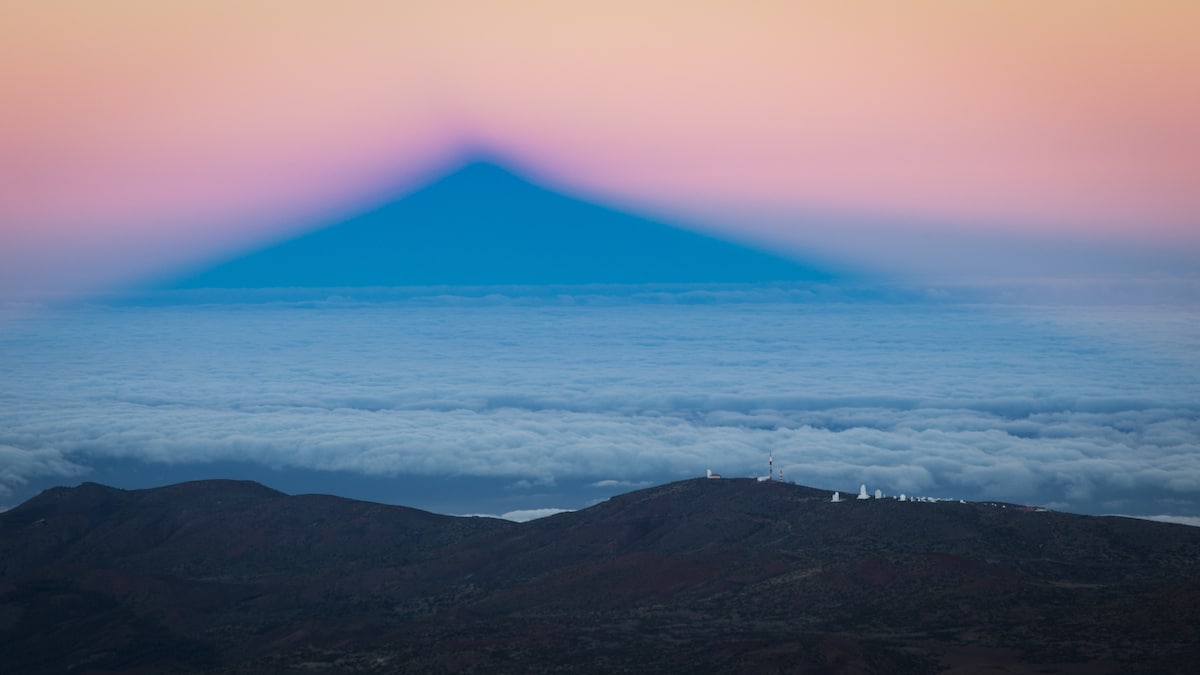 “Colossus” by Alejandro Roman Gonzalez. Earth Science, runner-up. “Shadow the mount Teide in Tenerife, Canary Islands, at sunset towering over Slooh Teide observatory. The sea of clouds shrouded the landscape at lower altitude, hiding neighbouring islands and the bustling activity of the coast of Tenerife. The colours in the sky are due to the reflection of the different wavelength of the white light as the sun sinks below the horizon. Also when a remarkable topographic feature, such as Mount Teide, blocks the fleeting rays of the sunset, this casts a shadow into the tinted atmosphere.” 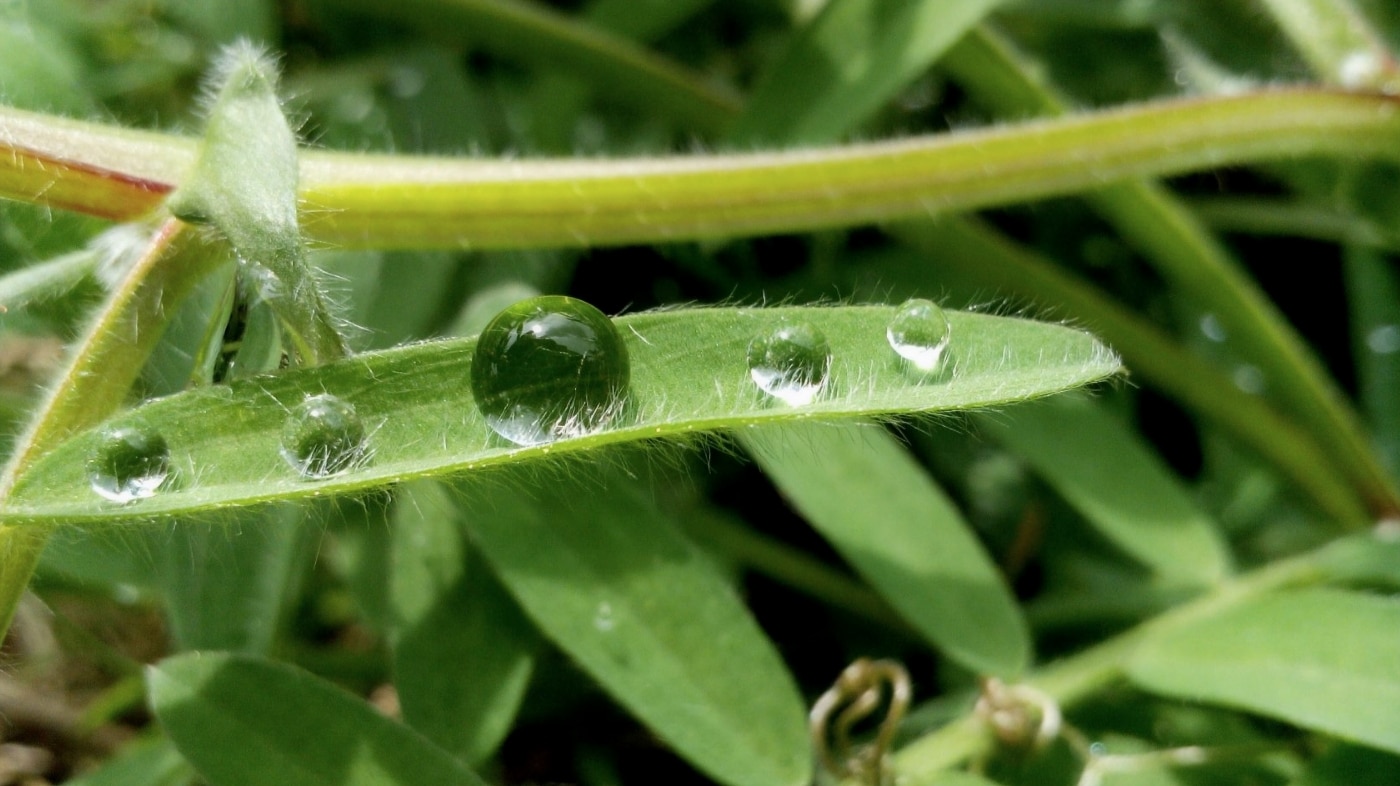 “A whole new ecosystem” by Dr. Vikash Singh. Ecology and Environmental Science, honorable mention. “The photo depicts a leaf holding drops of morning dew on its surface. If observed closely, the leaf's tiny hair-like structures can be seen, in a manner which provides protection to the holding water from insects and other bugs. Also, very clearly demonstrated is the surface tension of water, which provides enough force for the droplets to be spherical. As a microbiologist, I would try to isolate and study the micro-organisms/bacteria present on such an ecosystem, which is very diverse when compared to that present on a normal leaf. Also, I would be keen to study the benefits such moist micro-environment provide to the leaf.” 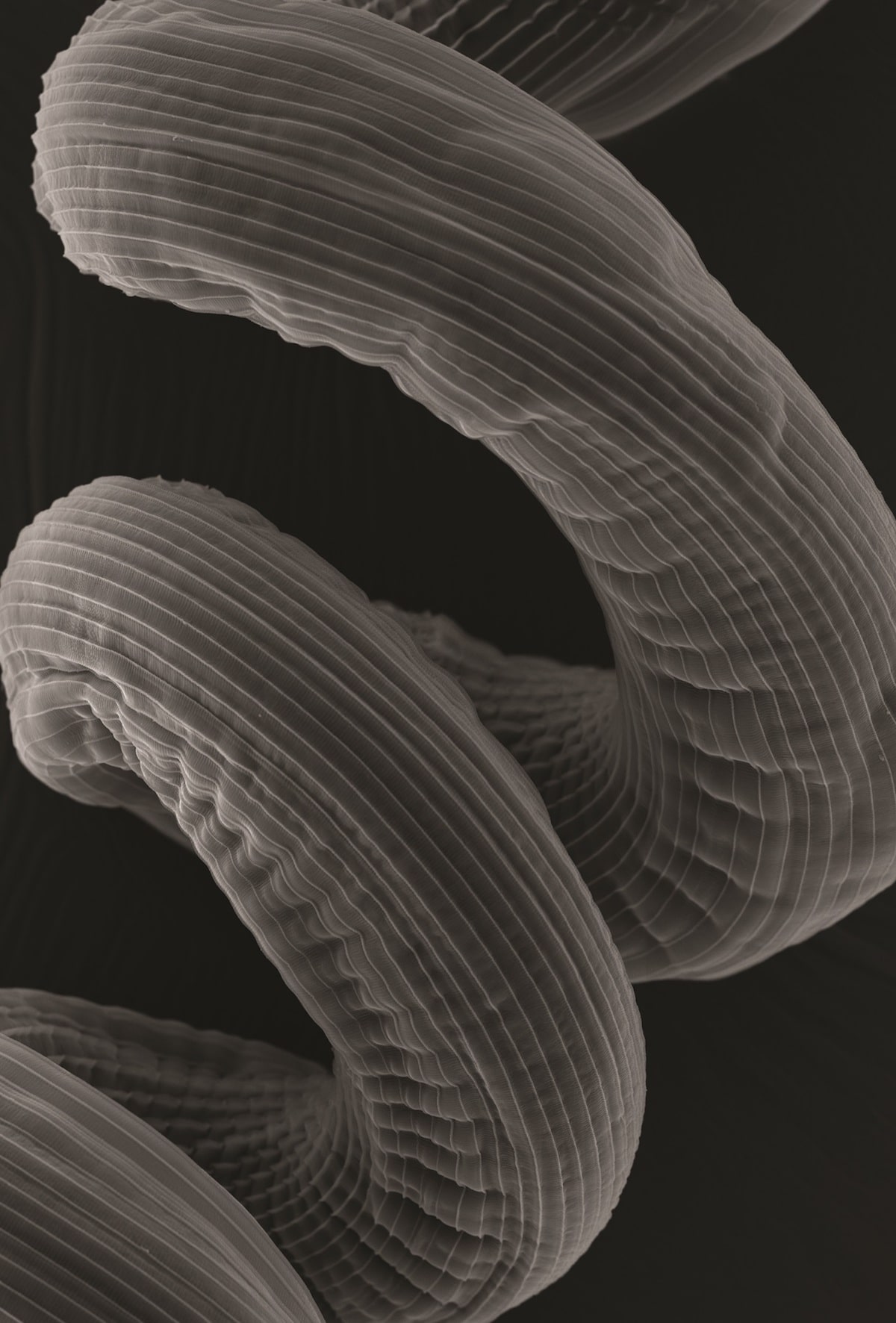 “Going round and round” by Dr. Leandro Lemgruber. Micro-imaging, winner. “Within the Institute of Infection, Immunity and Inflammation, scientists and clinical investigators develop different lines of research, from characterising the immune system to understanding the cell biology of parasites, viruses and bacteria and their relationship with their hosts; aiming to develop new therapies and treatments.
One research group (Maizels Laboratory) studies the exploitation of the host's own immune system by helminth parasites and how that could lead to minimising the risk of autoimmunity. The group makes use of a model rodent parasite – Heligmosomoides polygyrus. The adult parasite inhabits the intestinal space of its host and coils closely around the intestinal villi. Here we show the striated external surface of this helminth – the cuticle – observed by scanning electron microscopy.”

My Modern Met granted permission to use photos by the Royal Society.

Fascinated by science? Share
Like My Modern Met on Facebook
Get Our Weekly Newsletter
Become a
My Modern Met Member
As a member, you'll join us in our effort to support the arts.
Become a Member
Explore member benefits