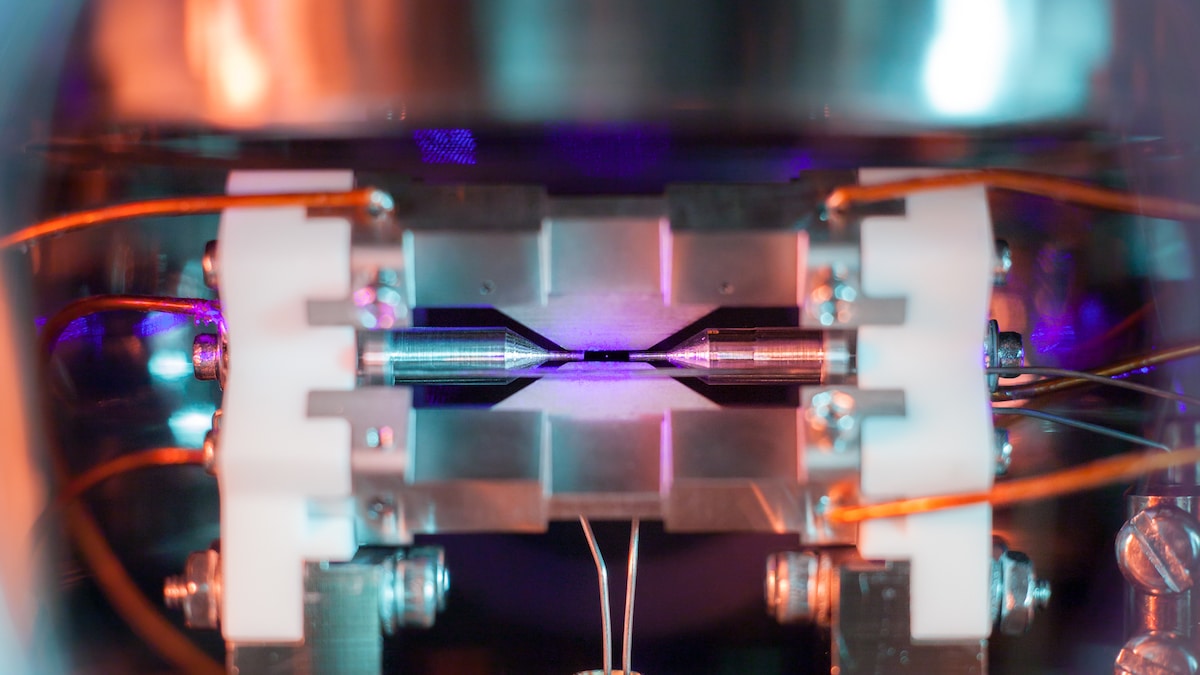 Ever wonder what an atom looks like? These building blocks of ordinary matter are a million times smaller than a strand of hair, making them impossible to see, even under a microscope. That is, until now. David Nadlinger, a Ph.D. student in University of Oxford Department of Physics, just won the top prize at the science photography competition organized by the Engineering and Physical Sciences Research Council (EPSRC) for his groundbreaking image of an atom.

Titled Single Atom in an Ion Trap, Nadlinger's photograph shows a single positively-charged strontium atom suspended in an electric field between two metal electrodes. For scale, the two needle tips it dances in between are just two millimeters apart. A close-up crop of the image lets us see this small dot of light, and is an incredibly unique way to see this tiny particle.

Just how was Nadlinger able to photograph the atom? What we're looking at is actually the particle emitting light. The atom was first illuminated using a laser of a specific red-violet color. It absorbs and then emits this light, making it possible to capture with an ordinary camera using a long exposure. The photograph we're looking at was taken through the ultra-high vacuum chamber that houses the ion trap. 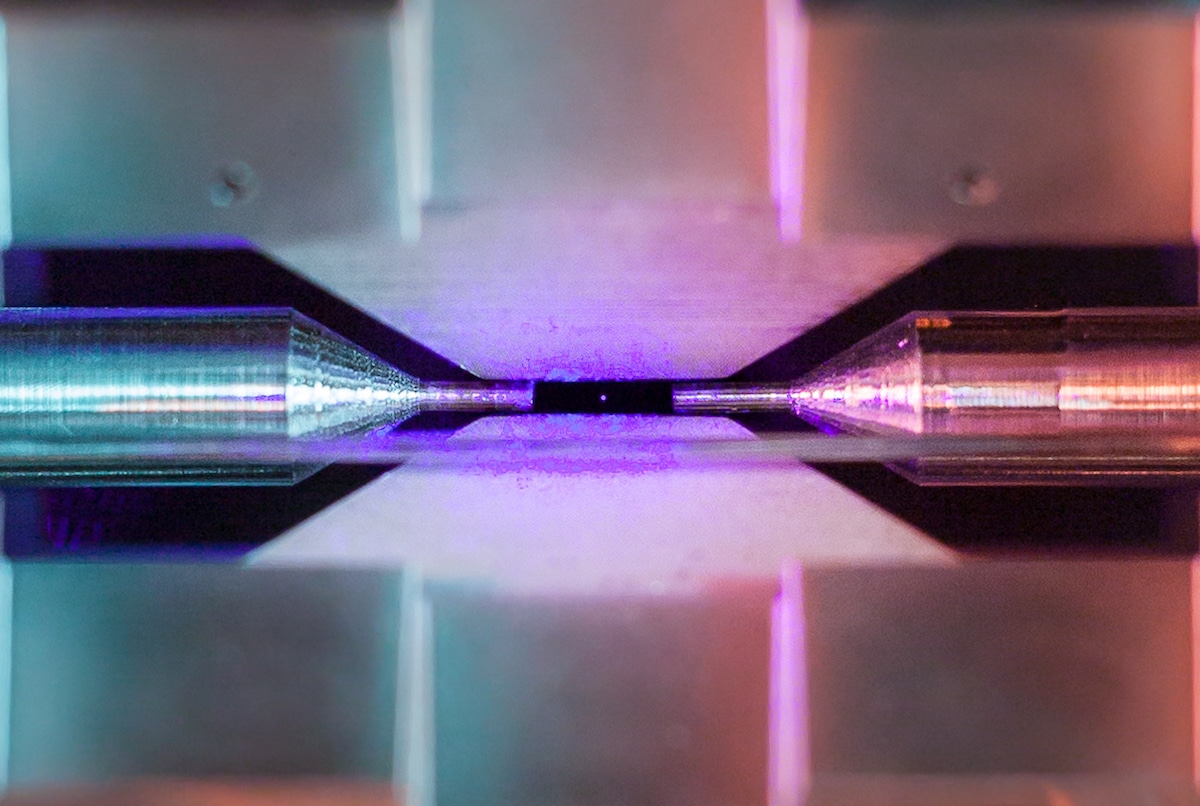 “The idea of being able to see a single atom with the naked eye had struck me as a wonderfully direct and visceral bridge between the minuscule quantum world and our macroscopic reality,” Nadlinger shares. His image has allowed him to share his daily research with the world, getting the public excited about physics in a new and unique manner.

The winning image was selected from over 100 photographs that were submitted by researchers who received EPSRC funding. It's the fifth year of the contest, with a wide variety of images that show the diversity of scientific research. “Every year we are stunned by the quality and creativity of the entries into our competition and this year has been no exception,” Professor Tom Rodden, Deputy Chief Executive of EPSRC said of judging the contest. “They show that our researchers want to tell the world about the beauty of science and engineering.”

Here are some other winning images from the EPSRC science photography contest.

“In a kitchen far far away…” 1st place Eureka and Discovery. The fluid instability patterns on top of a spherical soap bubble in a kitchen sink. The two sides of the picture indicate two vastly different physical phenomena studied in the research into how foams form and behave in lubricants and products like drinks. The right-hand side shows the traditional behaviour of gravitational fluid drainage flow where the colours indicate bubble thickness. The left-hand side with the holes demonstrates a type of quasi-elastic instability which occurs at the sub-micron lengthscale. (Photo: Li Shen – Imperial College London) 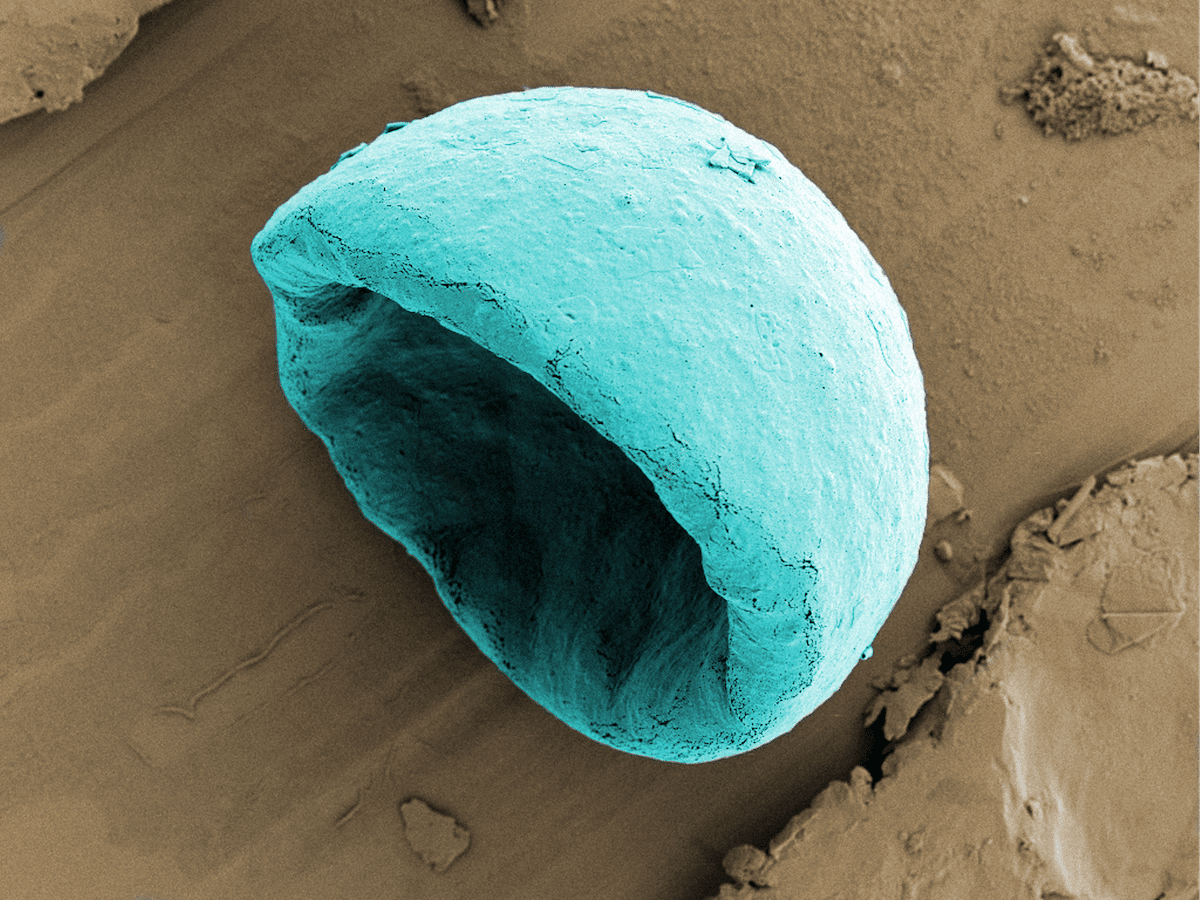 ‘Biodegradable microbowls could help fight stubborn cancers' 2nd place Eureka and Discovery. In a world dominated by spheres, bowl-shaped microparticles, such as the one pictured, may take the spotlight. Unlike healthy organs, many tumours lack an extensive network of blood vessels. This makes it difficult for anti-tumor drugs to reach deeper regions of the tumor, limiting their effectiveness. However, if bowl-shaped particles are injected along with the drug and ultrasound is applied, the drug could penetrate farther into the tumor. (Photo: Tayo Sanders II – University of Oxford) 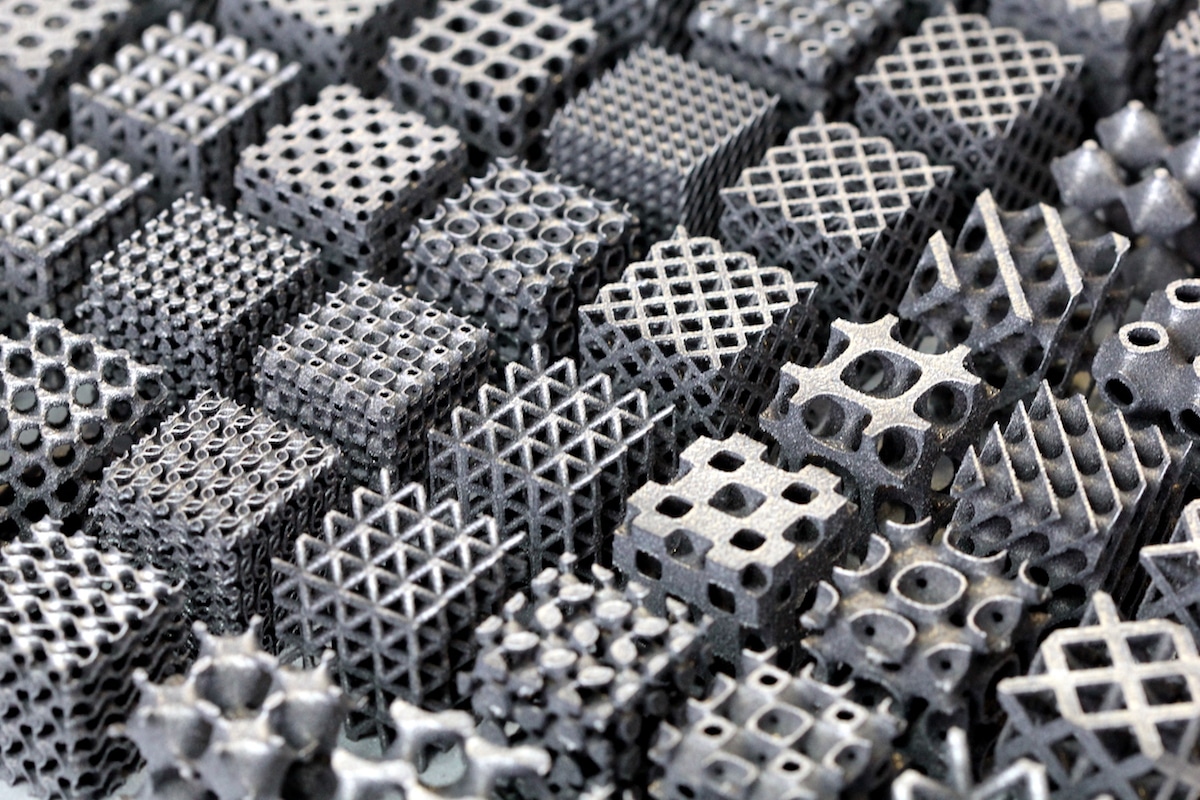 ‘Building blocks for a lighter future' 3rd place Innovation. A selection of lattice structures manufactured via selective laser melting, a type of additive manufacturing or 3D printing. These aluminium structures have exceptional strength and stiffness, allowing engineers to significantly reduce the weight of components. Weight is a critical factor in the aerospace and automotive industry and it directly correlates to the fuel efficiency and environmental impact of travel. (Photo: Sam Catchpole-Smith – University of Nottingham) 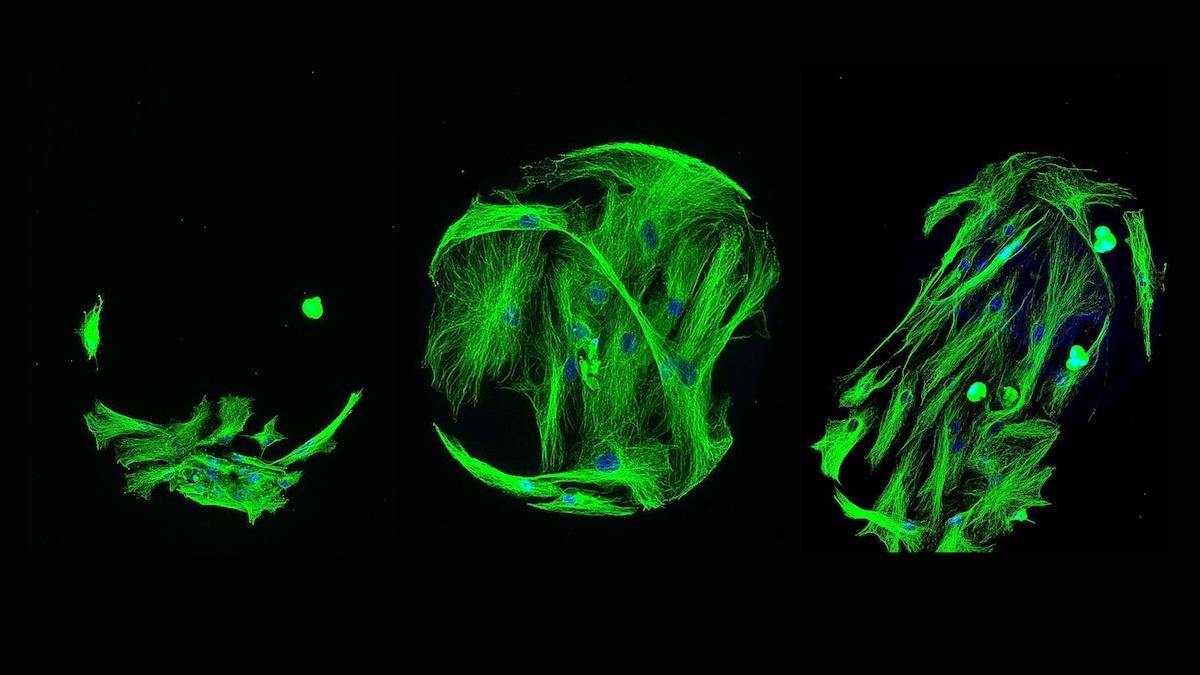 ‘High throughput screening in search for serendipity' 2nd place Innovation. High throughput screening is used to screen hundreds of polymers to investigate their material properties and how these can influence human mesenchymal stem cells’ ability to turn into bone cells. The ability of cells to attach to materials is an essential step towards the discovery of new biomaterials for growing stem cells. The attached cells show different morphologies on different polymer surfaces – an indicator of their different biocompatibilities. (Photo: Dr. Mahetab Amer – University of Nottingham)

All images via EPSRC.

Interview: Capturing Unexpected Photos of Crystallized Substances Under a Microscope

Stunned by this scientific photo? Share
Like My Modern Met on Facebook
Get Our Weekly Newsletter
Become a
My Modern Met Member
As a member, you'll join us in our effort to support the arts.
Become a Member
Explore member benefits