Interview: American Photographer Captures Everyday Life in Cuba, Feels Like He Went Back in Time 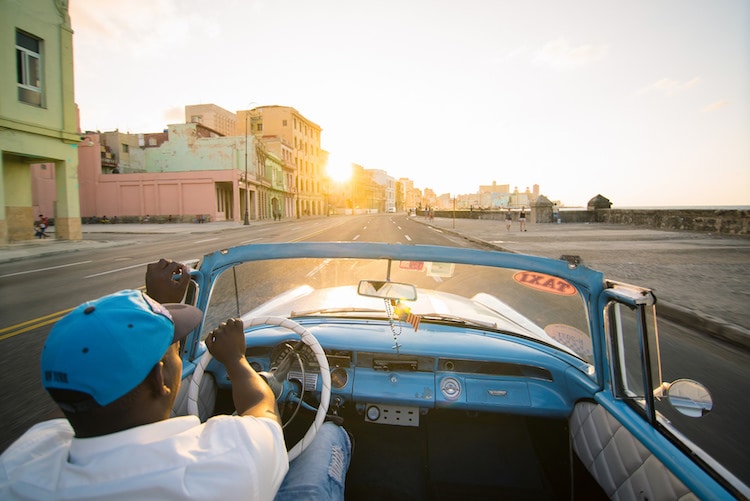 In the years following President Obama's easing of travel restrictions to Cuba, more and more Americans have ventured on educational visits to this once closed off island nation. Recently, commercial director and photographer AJ Bleyer of Advent Films spent 10 days discovering the beauty of Cuba.

Lucky for us, with camera in hand, he was able to capture stunning images of what life in Cuba looks like today. As an American traveling to Cuba, Bleyer most certainly went into the trip with certain expectations of Cuban life. Lively, colorful, and vibrant, his images capture the spirit he felt throughout his journey.

We recently had a chance to catch up with Bleyer, discussing his firsthand impressions of the island nation, and how locals felt about the rapid development of the country. Read our exclusive interview below and learn what his tips are for other Americans who wish to travel to Cuba. 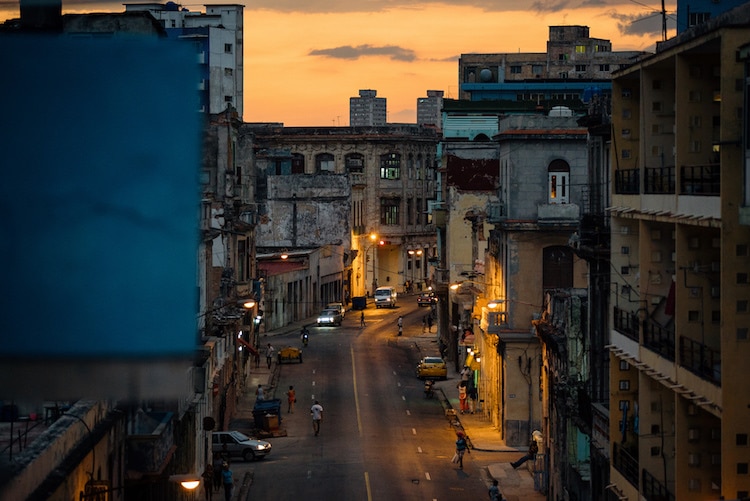 Can you tell us a little bit about yourself and Advent Films?

Hello! I'm AJ Bleyer, and I’m a commercial director and photographer. About 3 years ago I started a production company in Los Angeles called Advent Films. It’s grown dramatically, and we now produce media content for a number of luxury brands. We've shot everything from beauty and glamor to food and beverage, but our roots are definitely in automotive media. We’ve been fortunate enough to shoot for some of my favorite manufacturers, like Ferrari, Tesla, and Aston Martin.

What spurred the trip to Cuba?

I had never left the United States before, so this was actually my first EVER international trip. I was beyond excited to not only learn about Cuban culture but also felt that this was a rare opportunity to experience Cuba in its current state.

Everything from the cars to the architecture is reminiscent of the 1950’s glory days, but with the impending rise of US tourism (and the money that comes with it) many feel it won’t be long before Cuba’s unique landscape is modernized and remodeled. In that regard, I was really eager to experience the country now, before it changes. 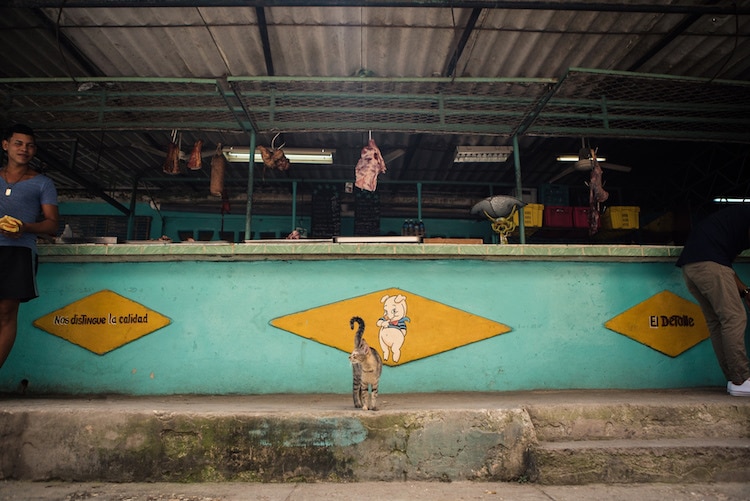 Did you have a set plan of what you wanted to see?

The weekends leading up to the trip were definitely spent doing online research and collecting recommendations from friends who have visited. After countless “Cuba” searches on YouTube and Netflix, I had a loosely-scheduled plan for our 10-day trip. We had restaurants we wanted to check out and landmarks we wanted to see, but our primary interest was in simply trying to experience the real Cuba.

In looking to learn about the country, we both wanted to stay away from the touristy resort areas and try our best to experience the country a bit more authentically. Though we definitely had some planned activities each day, parts of the trip were also spent exploring the streets, meeting the locals and consuming mojitos. 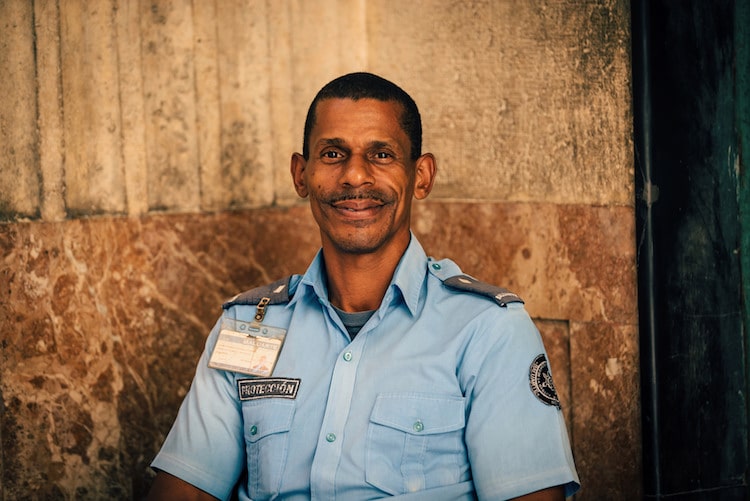 Did you have a notion of what the country would be like before you arrived?

Honestly, I had absolutely no idea what it would be like. The photos and videos I had seen of Cuba almost didn’t look real, and I knew it was going to be unlike anywhere I had ever been before. After landing and getting in a taxi, we began driving through the city to our Airbnb. Passing through Havana at sunset for the first time was something I’ll never forget.

The dilapidated buildings, vibrant colors and classic cars offer an almost overwhelming amount of eye-candy in every direction. As a photographer, it felt as if nearly everything I saw would’ve made an incredible photograph. But there’s something about Cuba that simply can’t be captured through images. The country is just so…. textural. 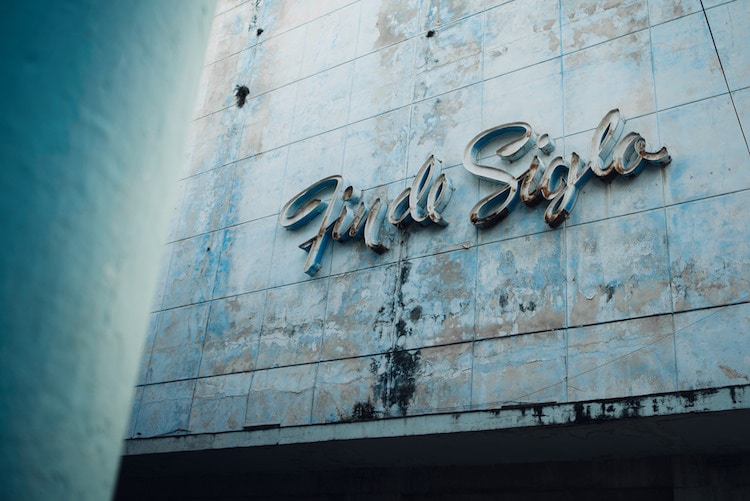 The other reality of Cuba is that it’s struggling economically. And considering that I had never traveled to a developing country before, I really had no idea what to expect when we landed. Though we ate delicious food, stayed in lovely Airbnbs and felt very safe there at all times, seeing the living conditions for the average Cuban was pretty sobering.

Many people were without shoes, and as a tourist there you stand out pretty clearly from the locals. But despite the country’s economic condition, the atmosphere there is very fun, upbeat and optimistic. The people were incredibly friendly, and everyone seems to unite through a shared celebration of music. Lots of music. Lots of dancing. It's awesome. 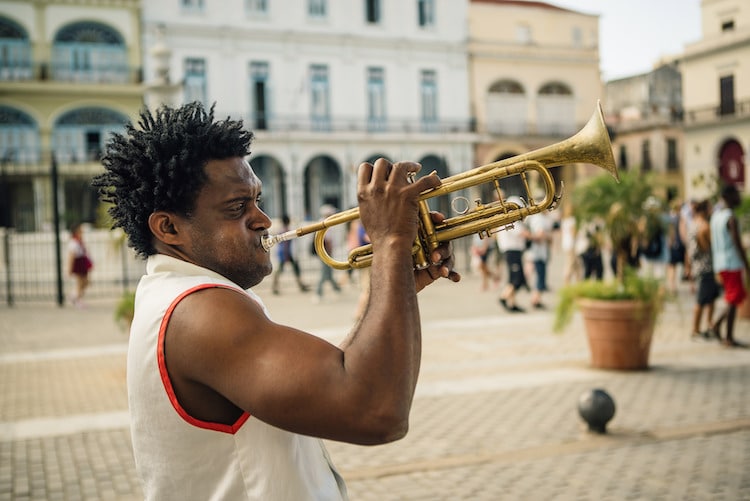 Halfway through the trip, we traveled to Varadero, a smaller beach community east of Havana. We arrived late at night, and our host offered to make us breakfast in the morning. The next morning, we walked up the bright blue staircase to the patio, where we were greeted by not only an AMAZING breakfast spread but a beautiful rooftop view of the city.

I remember sipping my coffee and taking in the beautiful landscape as a perfect morning breeze blew by. We luckily were staying at that Airbnb for several nights, and it was the absolute best way to start the day. If you plan on visiting Varadero, here’s a link to the place we stayed. Kati was a great host. 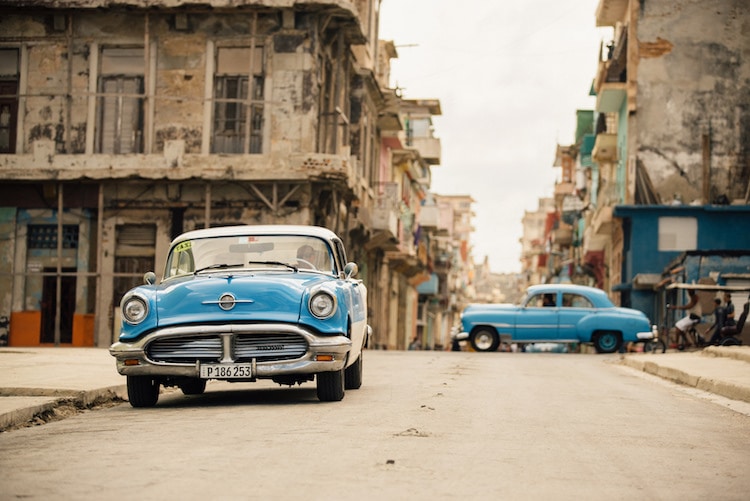 You mention that visiting Cuba was like stepping back in time. How so?

I knew it would be cool to see classic 1950’s cars driving around, but it ended up being so much more than that. The architecture in the city is incredible, with many of the buildings having been constructed as early as the 1700-1800’s.

Additionally, the country is largely without internet—which was also a new experience for me. So between the old buildings, classic cars and lack of technology, you really get a sense that you’ve been transported not only to another world but to another era. It’s a cool experience. 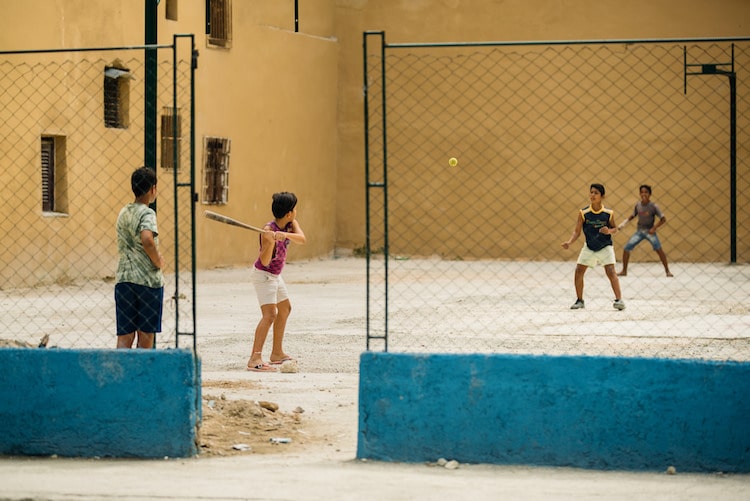 How was your interaction with locals?

Aside from Cuba exceeding ALL of my visual expectations, it was incredible to experience a foreign culture for the first time. I was a little nervous as to how we’d be received as American tourists, but the people of Cuba were all incredibly warm and inviting. Though SOME English is spoken there, I do recommend reviewing some Spanish before going.

As tourists, we were often approached by locals who offered recommendations to local eateries and shops. Sometimes it was because they had a business interest intuit certain establishment, and sometimes it was an honest recommendation. As time went on, I got better at identifying the difference.

One day we took a taxi out to Viñales, a smaller agricultural region home to many of the country’s tobacco fields. We were accompanied by our English speaking tour guide, Yanara, who not only provided incredible insight about Viñales but about the country at large. We probably spoke with her more than any other local on our trip, and it was a really educational experience. Hearing about the details of modern-day Cuban culture were as fascinating as learning about the country’s rich history. She really was a phenomenal tour guide and I highly recommend her if you’re looking for one. You can email her to set up a tour. 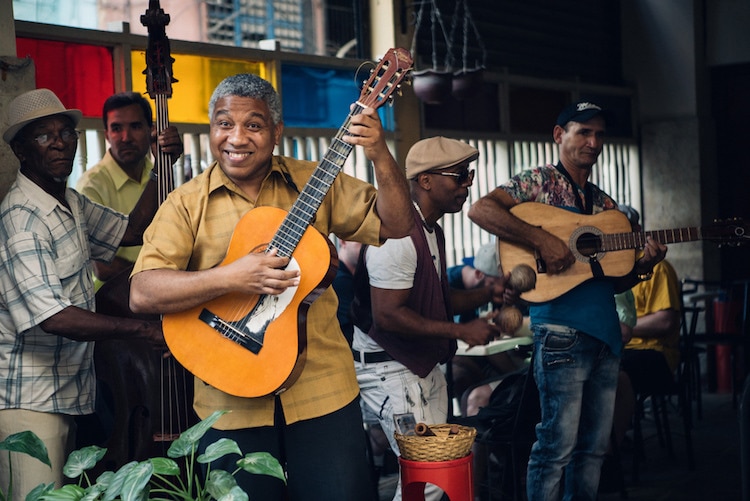 Obviously Cuba has changed slightly over the last several years, coming a bit more open to modern advancement. Did you get a sense of this change?

After visiting, I can say with confidence that Cuba’s unique preserved landscape will look very different in the near future. The change is happening now. As we walked along the coast, nearly every old ocean-front hotel was being remodeled and renovated. Lots of construction everywhere. The city is changing, and there’s an air of suspense among everyone to see what the future of the country will look like.

I asked several locals if they were in any way nervous about this impending change, but was happy to learn that there's really no worry about the increase of American tourism. Though the economy and landscape are rapidly transforming, the passion and vibrancy of Cuban culture seems like it’s here to stay. 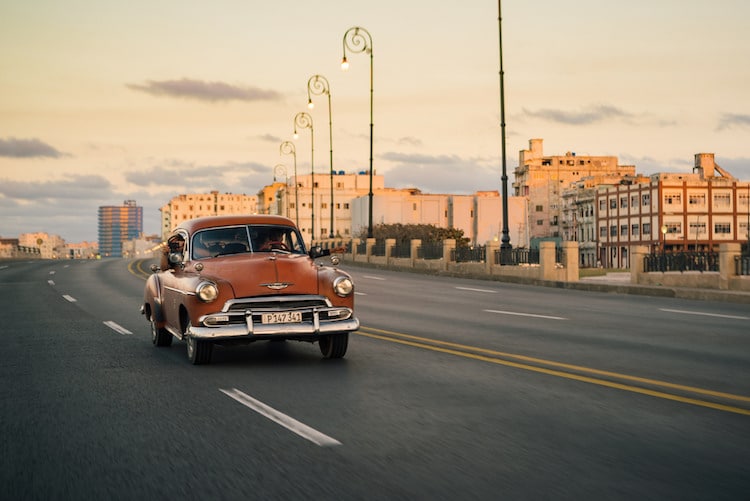 Cuba is still largely unvisited territory for most Americans. Did you feel welcome there? Any advice you'd give to future visitors?

I felt incredibly welcomed, and safe at all times (even with my big camera strapped around my neck at night). The whole country is very welcoming to tourists in general. As far as advice goes, I do have a number of tips. First and foremost, internet is very limited so I highly recommend an offline map to help you get around. I used “Maps.Me” and it worked great.

I also recommend bringing toilet paper, as most establishments don’t have it. The city is surprisingly smoggy, so I ended up packing (and using) Claritin for most of the trip. I also recommend packing some emergency Pepto Bismol. Lastly, do NOT drink or brush your teeth with the tap water there unless you want a super upset stomach (I’m speaking from experience here) so be careful to only drink bottled water, and ask for your drinks with no ice at smaller eateries. 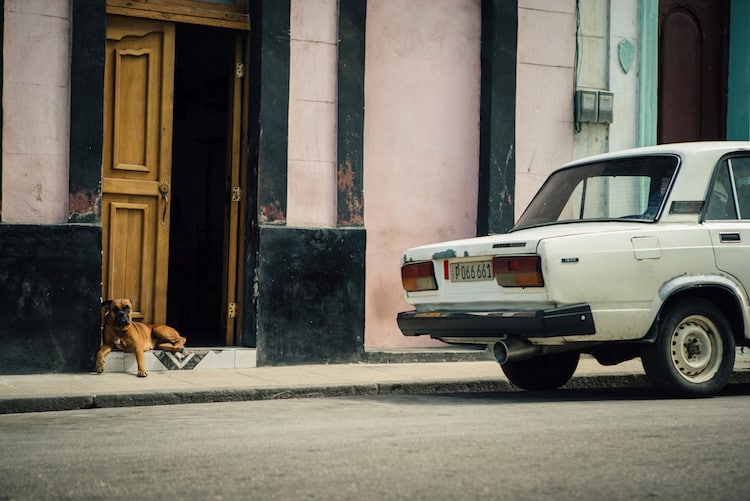 What do you hope people come away with when looking at your images?

There are many pictures coming out of Cuba currently, but I hope my images portray both an artistic AND accurate representation of the country. My images are not overly romanticized. There are stray animals and poor living conditions. But there’s also an incredible and unique beauty there unlike any I’ve ever experienced. It’s incredible to think that an entirely different WORLD exists only 200 miles away from the Miami coast. I really recommend you visit, especially if you’re in the US. It’s so close! 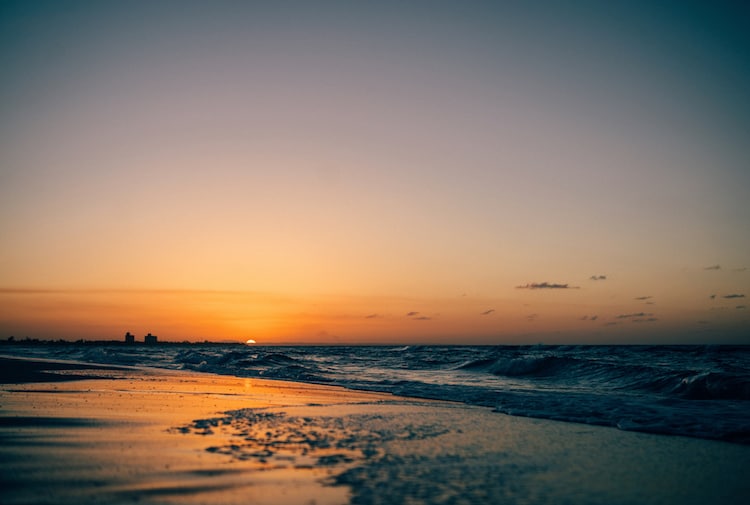 My Modern Met granted permission to use photos by AJ Bleyer / Advent Films.