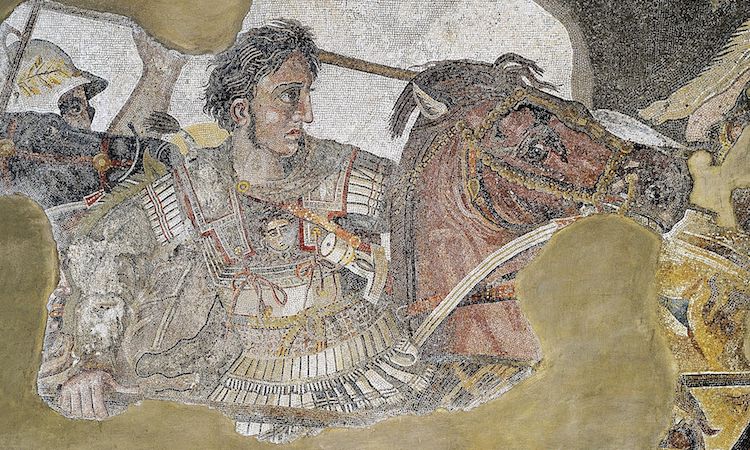 There are few whose legacy's have endured throughout history quite like that of Alexander the Great (356-323 BCE). The man whose name would live on as the epitome of immense military prowess was born as the son of the Macedonian king. He was raised in a very studious and disciplined environment to prepare him for leadership. After his father's political assassination, Alexander made quick work of establishing himself as a force to be reckoned with—capturing the crown and conquering the Greek city of Thebes in quick succession. However, he did not stop there.

Listed among Alexander's star-studded triumphs are Egypt, strategic Phoenician ports, and, after a long rivalry with King Darius II, the colossal empire of Persia. During a short 12-year-reign, Alexander conquered most of the known world and created a Eurasian empire that stretched from Greece to India.

Prince, king, general, and legend—there's a great deal to unpack in Alexander the Great's name. To better understand his layered life, read on to learn ten important facts. 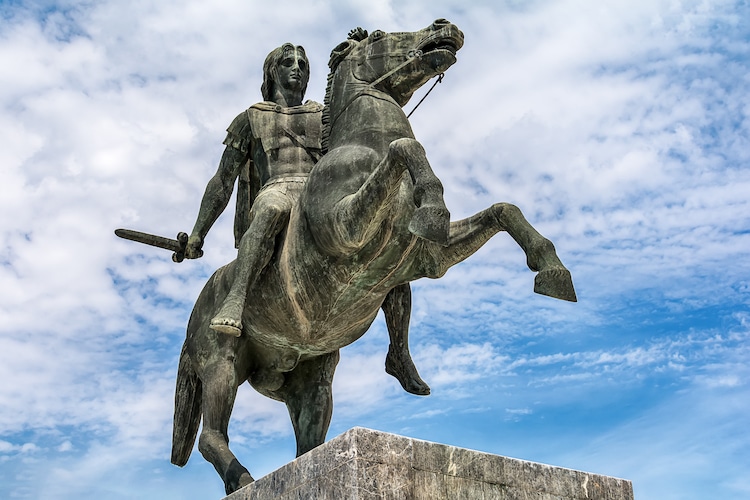 Statue of Alexander the Great in Thessaloniki, Greece. (Stock Photos from Nenad Nedomacki/Shutterstock)

Here are 10 facts about Alexander the Great—the legendary military genius—that you may not know.

1. He was of royal lineage on both sides.

Alexander was born in 354 BCE to King Philip II of Macedonia and his fourth wife, Olympia. Although not Macedonian herself, Olympia was the daughter of the king of the Molossians, an ancient Greek tribe in Epirus. Her family even claimed relation to the Trojan War hero Achilles.

After Alexander's birth, Olympia was made the principal wife. However, their marriage was not all sunshine and roses. Due to Alexander's mixed heritage, his claim to the throne was constantly questioned, causing tension between Philip II and Olympia. 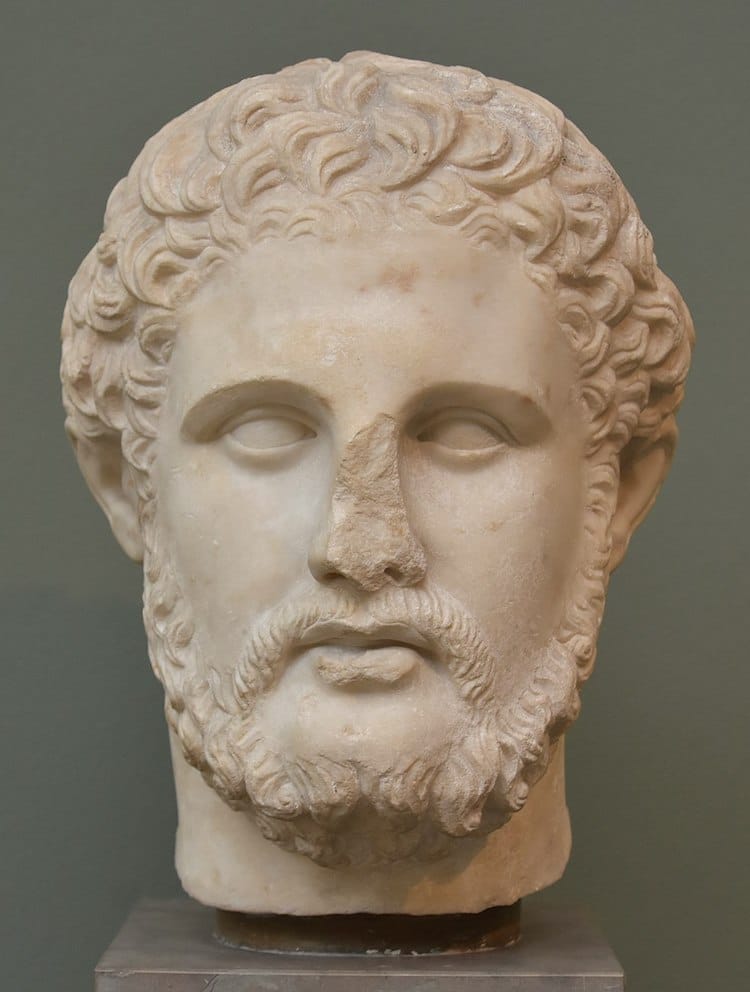 2. Alexander's father paved the way for his military success.

Although his name is now dwarfed by the legacy of his successful son, King Philip II of Macedonia (382-336 BCE) was an acclaimed tactician in his own right. Under his reign, Macedonia grew from a small periphery kingdom to a military powerhouse—dominating its neighbor Greece in the span of 25 years.

To do this, Philip II utilized diplomacy, marriage alliances, as well as a reformed army. Alexander's father developed an infantry formation known as the Macedonian phalanx. In this strategy, a block of infantry is packed tightly together, with each soldier carrying a 20-foot-long pikes called a  sarissa. This was typically used to hold off forces while cavalry went on the offensive.

Accordingly, Philip II was responsible for transforming the Macedonian military into the commanding force Alexander later used to meet his goals. 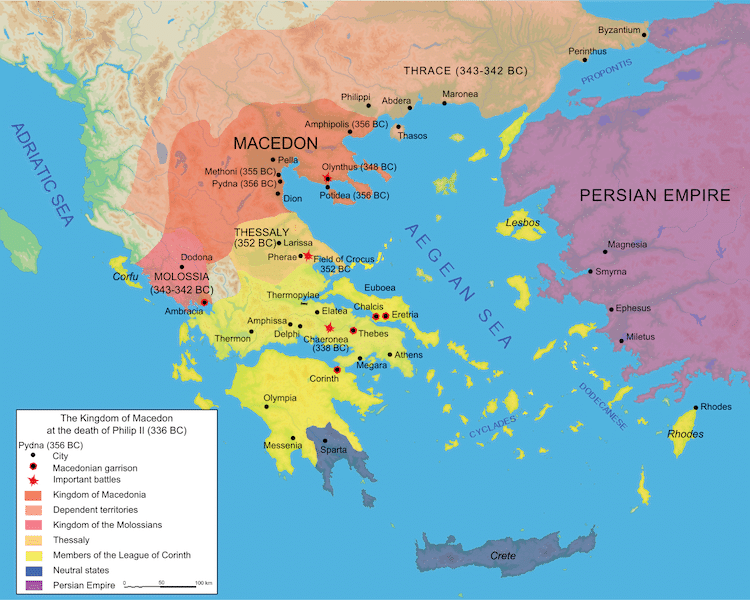 Map of the Kingdom of Macedon at the death of Philip II in 336 BC (Photo: Marsyas via Wikimedia Commons)

3. He was tutored by Aristotle.

As son to the Macedonian king, Alexander was constantly surrounded by educational sources to teach him math, history, archery, and other important subjects. Among the esteemed names called in to teach the 13-year-old prince was the acclaimed Greek philosopher Aristotle. (King Philip II promised to rebuild Aristotle's home in Stagira in exchange for tutoring his son.) This encounter seemed to have inspired a life-long love of philosophy and its different forms.

According to legend, Alexander, while still a prince, sought Diogenes the Cynic—an infamous philosopher who was known to reject propriety and sleep in a large clay jar. When Alexander found the Diogenes, he asked the philosopher if there was anything his fortune could do for him. “Yes,” Diogenes replied, “stand aside. You're blocking my sun.” This meeting made such an impression on Alexander that he was quoted as saying, “If I were not Alexander, I would be Diogenes.”

4. The Iliad was his favorite book.

The Greek biographer Plutarch wrote that Alexander was known to carry a copy of Homer's Iliad annotated by his tutor Aristotle wherever he went. Plutarch said, “He esteemed it a perfect portable treasure of all military virtue and knowledge.”

5. Bucephalus was the name of his mighty steed.

Plutarch's biography of Alexander also says that when Alexander was ten years old, his father was offered a large and magnificent horse that refused to be tamed. The prince, however, noticed that the horse feared its shadow, and through quick wit was able to mount it. Philip II, feeling intense pride in his son's courage, declared, “My boy, you must find a kingdom big enough for your ambitions. Macedon is too small for you.” 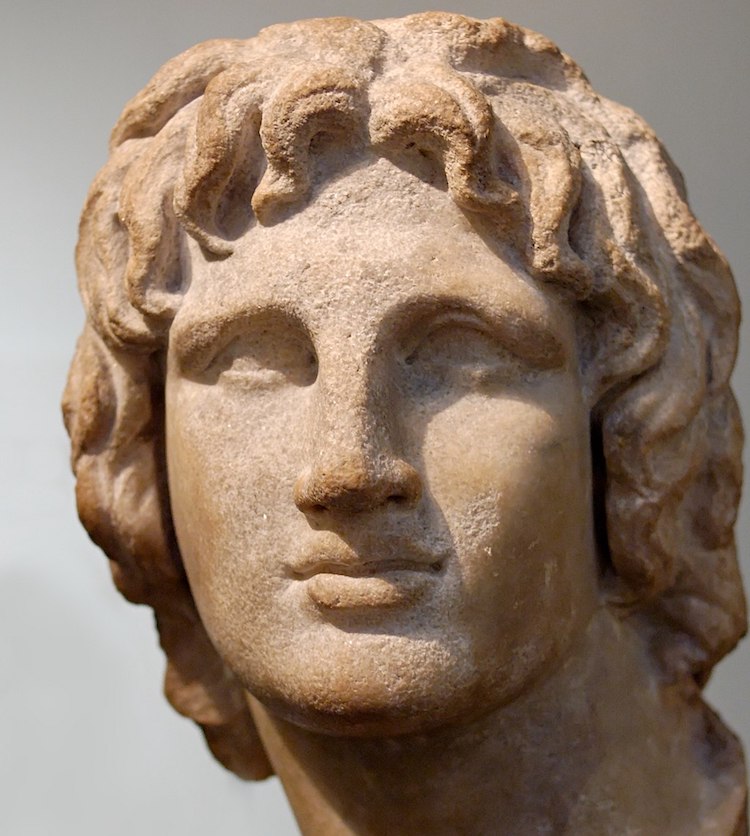 Portrait of Alexander the Great. Marble, Hellenistic artwork, 2nd-1st century BC. Said to be from Alexandria, Egypt (Photo via Wikimedia Commons [Public Domain])

6. Alexander's assumption to the throne was violent.

In 336 BCE, Philip II was assassinated by the captain of his own bodyguards, who was also killed during his own escape. Despite years of contentions regarding legitimacy and heritage, 20-year-old Alexander was declared king in the very same hour by the nobles and army. However, Alexander was not easily placated.

To feel secure in his reign, Alexander eliminated all potential rivals to the throne, including his cousin and two lesser Macedonian princes, to name only a few. As a freshly minted king, Alexander immediately went on to crush Greek rebellions, marking the start of a dominating regime.

Multiple ancient sources agree that Alexander, already a king, did, in fact, encounter the challenge of the famous “Gordian Knot.” It was during a campaign through Turkey that Alexander came across the knot—which was reportedly tied to the yoke of the wagon of King Midas' father, Gordius. An oracle stated that whoever was able to undo the knot would become ruler of Asia. Alexander's solution, however, is disputed. Some confirm Alexander cut the knot as the legend states, but others say he was able to untie it.

All in all, it is historically accepted that Alexander the Great “cut” the Gordian Knot, and, whether through fate or coincidence, did indeed partially fulfill the prophecy by reaching India.

8. Alexander was never defeated in battle.

Although Philip II deserves due credit for developing the Macedonian phalanx formation, it was his son that utilized it to its fullest potential. Already as a teenage general, Alexander was well respected for leading men into battle at extraordinary speed. Assuming the crown only served to strengthen Alexander's talents. According to records, even after 15 years of warfare, Alexander never lost a battle.

Moreover, the Macedonian king and his army are calculated to have walked over 11,000 miles during his 12-year-reign. Additionally, Alexander's empire—from Greece to India—totaled 20 million square miles.

9. He named more than 70 cities after himself.

From Egypt to Turkey, Alexander left his mark all across his empire. By the end of his reign, Alexander named a total of 70 cities after himself—the most famous of these being the large Egyptian metropolis.

The Macedonian king even founded a city called Bucephala in India, named after his beloved horse's death.

10. Alexander's death is still a mystery.

In 323 BCE, Alexander died from a fever at 32 years of age. According to records, Alexander's death occurred in the palace of King Nebuchadnezzar II of Babylon, two weeks after a large celebration. The cause of death is still speculated among historians. Some believe Alexander may have been poisoned by those closest to him. Others propose he died of environmental causes such as malaria, lung infection, or typhoid fever. Due to the historical records of Alexander's prolific drinking, there are also historians who suspect that he died of liver failure.

After his death, however, it was reported that Alexander's body was covered in honey before being placed in a golden sarcophagus, which was then stored inside a casket. One or two years later, Alexander's body was sent back to Macedonia only to be intercepted by forces Ptolemy I, who changed its course to Egypt. Ptolemy I aimed to be seen as Alexander's successor by obtaining control of the Macedonian king's body.

Ultimately, a tomb for Alexander's remains was constructed in the Egyptian city of Alexandria. 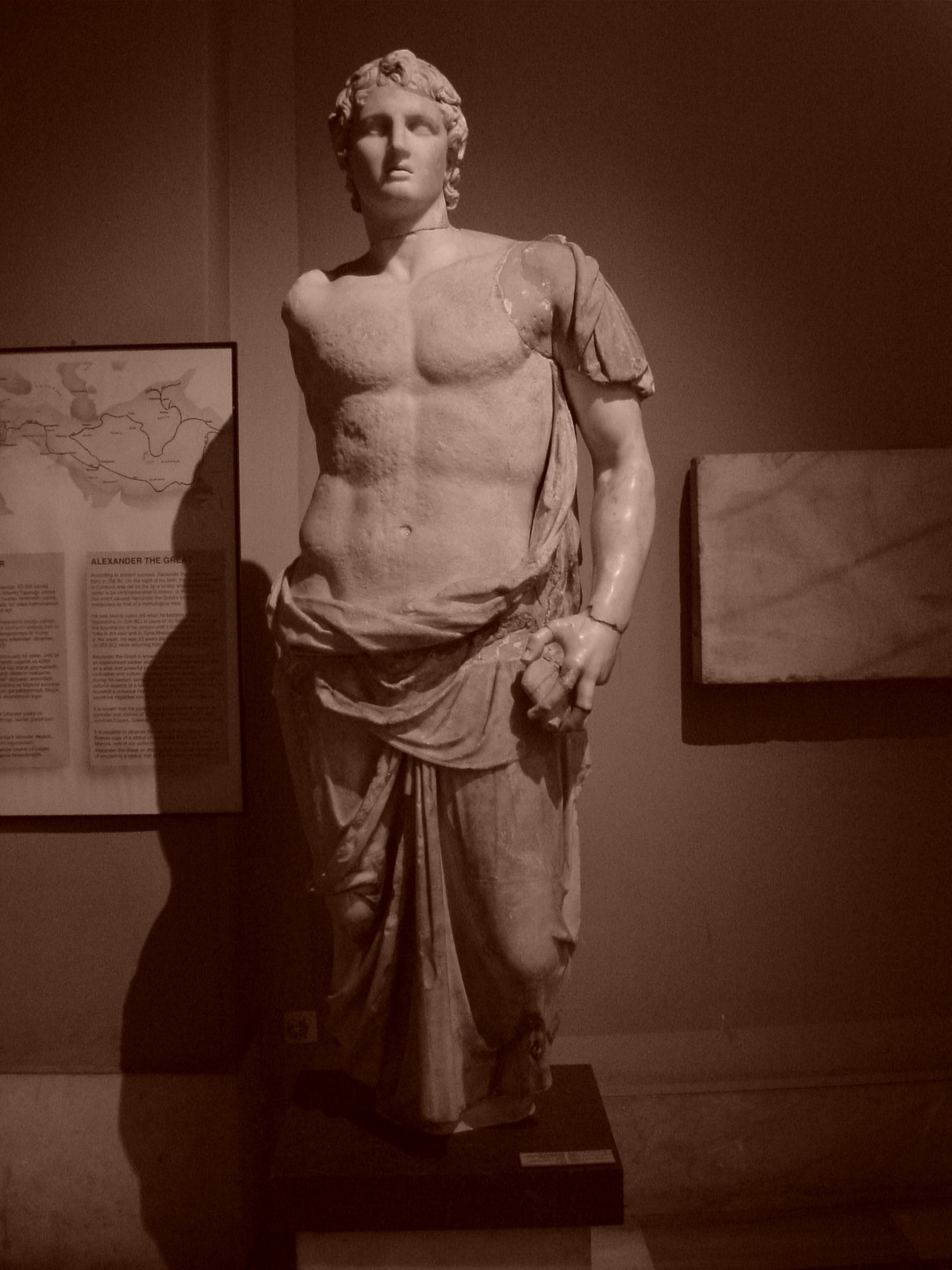