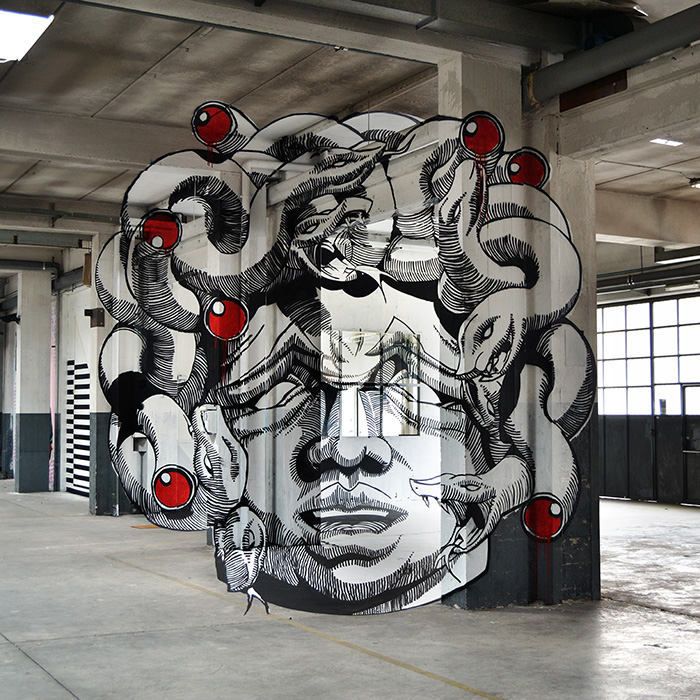 Anamorphic art has been all the rage these days! As we all know, Medusa is a horrific creature from Greek mythology. The story goes that if you look into her eyes you'll be turned into stone. This anamorphic street art version of her can be seen only from a certain viewpoint. Located in the factory hosted by Sub Urb Art, this mystical piece was created by two talented artists, Ninja1 and Mach505. They were inspired by the story of how Perseus defeated the monster.

We got in touch with Truly Design and they were kind to grant us an interview. You can read it, below. 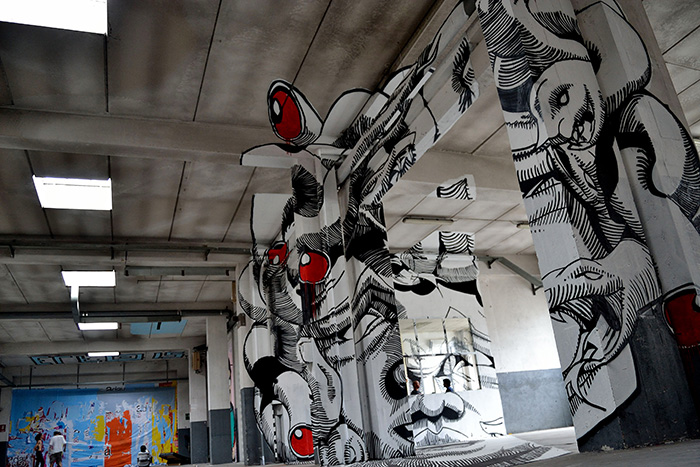 What inspired you to create this amazing anamorphic Medusa piece?
In the last years, we've been painting a lot of stuff with this specific technique, ranging form the reproduction of our logo on the walls of our studio to the “musical anamorph” series. The paintings have always been contextualized in abandoned buildings, where illegal rave parties had been taking place for years.

However, we weren't fully satisfied, since the places – very hard to reach – and the relatively small spaces forced us to concentrate on simpler, smaller pieces.

The anamorph Medusa was painted in an abandoned factory turned into an urban lab by the Urbe association, who gave us the possibility to paint on a huge surface, and all the time necessary to create something more detailed.

Lately we've been tripping a lot on ancient mythology. We've done sirens, Aztec gods, chimeras and what not. The Medusa head was painted a few meters away from her decapitated body; it was kind of a “find the head” game: the body was quite visible, whilst the head, if not seen from the exact angle, seems like a semi-abstract, casual clash of black, white and red. 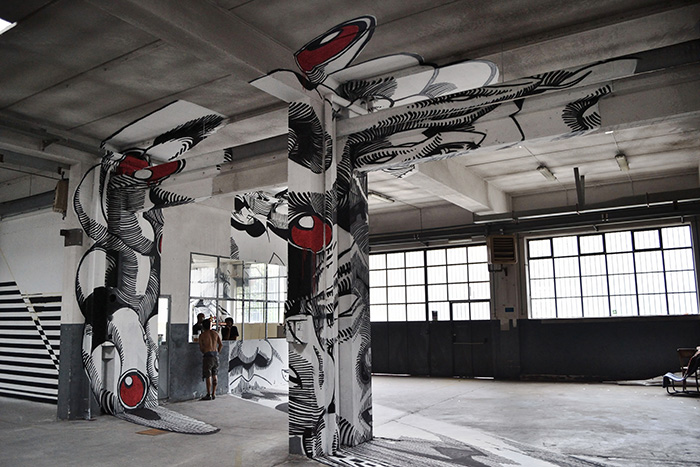 In your own words, can you give us a brief rundown on the process you went through?
The anamorphs are always site-specific. In this case, we took a stroll through the factory, to find a spot where the maximum number of surfaces were involved. The more complicated and multi-faceted the surfaces, the cooler the anamorph effect turns out. After that, we cleaned the floor real well, projected the outlines and painted it over 35 hours. You can't really tell from the picture, but the total surface is huge.

Choosing the portions of surface to paint on – and which part of the image goes where – is perhaps the most important part of the whole task. The complexity of both aspects has to be taken into consideration, to avoid finding yourself stuck – 5 meters high and well into the painting phase – realizing that you can't reach parts of your drawing. 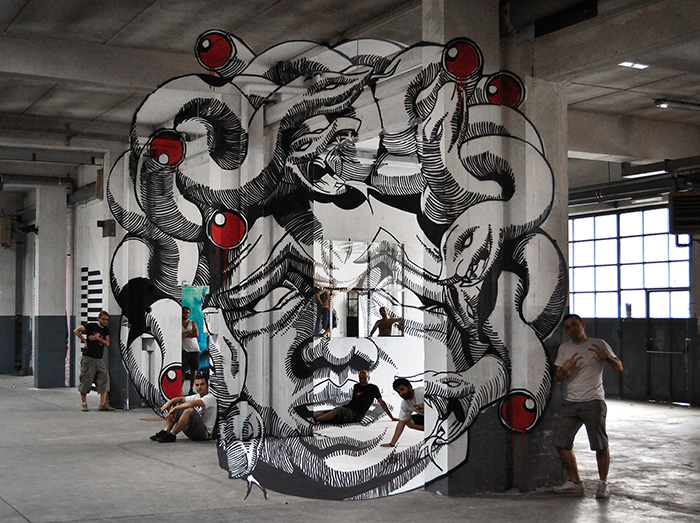 How many people were involved? Who?
Of the four of us, usually it's Ninja1 and Mach505 who take on these projects. They're the most patient ones! Mauro149 “narrated” the first part of the myth (Perseus decapitating the Medusa) on a couple of walls which are actually on the other side of some of the surfaces the head rests on. Of course, a big thank you goes to the Urbe staff who made all this possible. 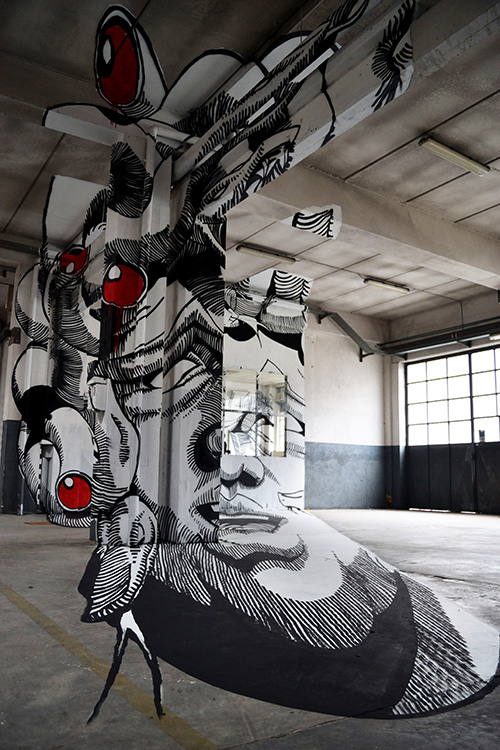 What aspects of the project were the most challenging?
Definitely the most physical aspect is painting on the ceiling on a scaffolding or a ladder, in corners where different surfaces meet, and on the floors as well. The final photo is also tricky: choosing the right time of day, the perfect light and the right optical to avoid heavy distortion.

Also, tracing a projection might seem simple, but at a distance of 20 meters the pixels are the size of your head, and hardly visible at all because of other lights, so you do need to check what you're doing from the viewpoint every once in a while. Furthermore, the final check and the resulting obsessive corrections must take into account a “bleed” on adjacent surfaces, as so to allow some elasticity for who will view the anamorph in person. 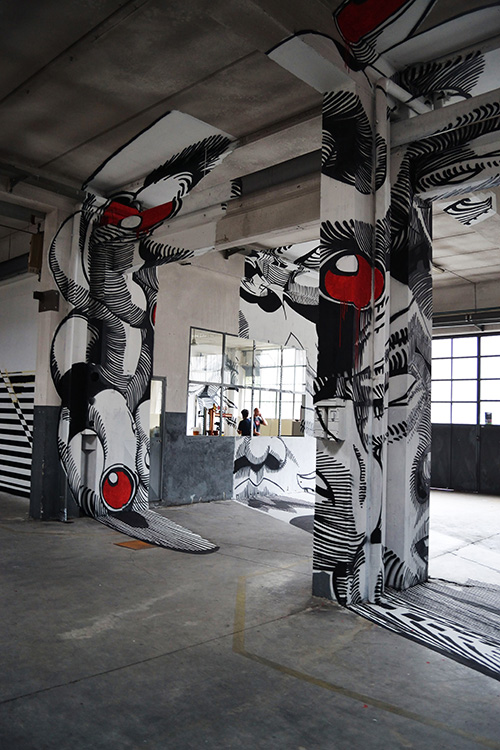 Who are some artists you are inspired by?
The anamorph technique has been known for centuries, and was used by illustrious artists such as Leonardo Da Vinci, Hans Holbein and the more recent Julian Beever, George Rousse, Felice Varini. Each artist proposed his own way and technique to render the effect, as so did we. 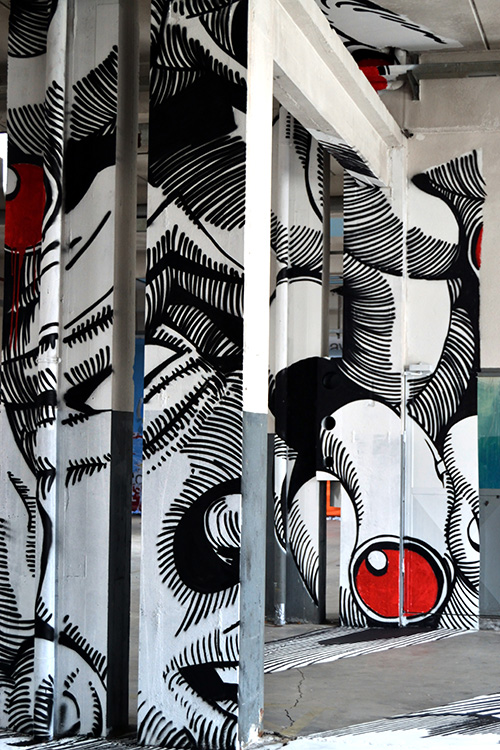 What's next for you?
We're thinking of evolving the subjects, making the design more complex, adding more colors and – why not? – hitting larger surfaces. We don't really envision limits. That's the cool thing about urban art. You never know where and what you might end up painting, and situations take from 10 minutes to 48 hours to evolve into action! 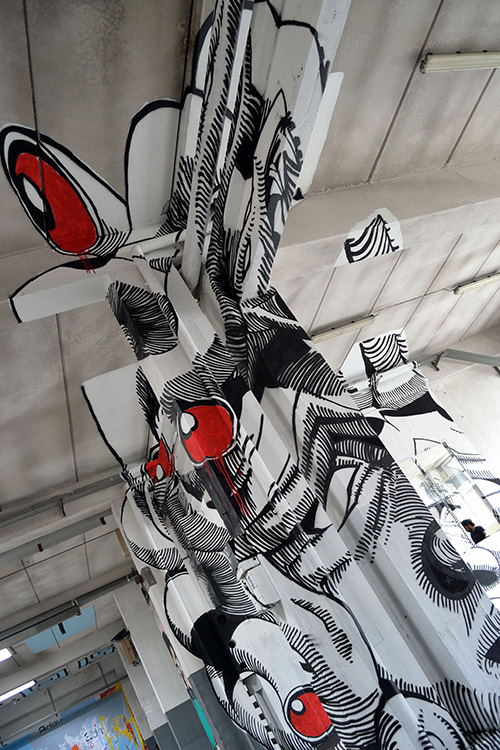