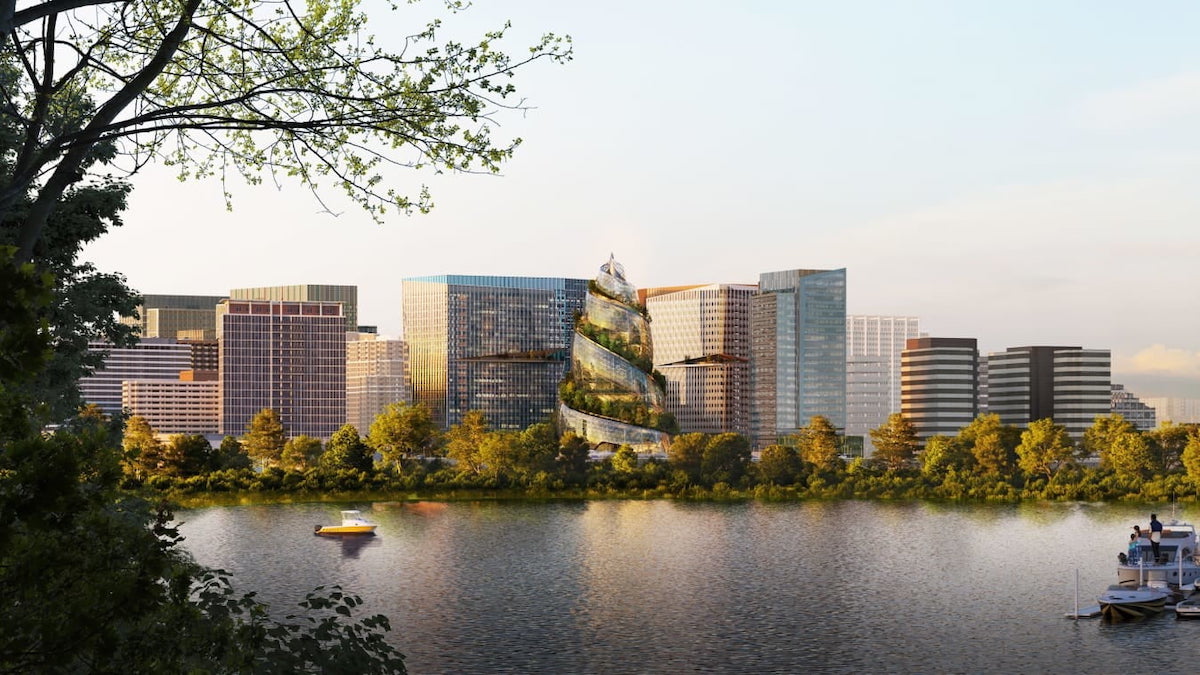 The new headquarters for Amazon in Arlington, Virginia, may rival their famous Seattle spheres. Called The Helix, the project is a 350-foot-tower inspired by a double helix. If it has a familiar aesthetic to its Puget Sound headquarters, that's no coincidence; it was designed by NBBJ, the same architecture firm that created its original iconic HQ.

The unconventional office building includes trees and other lush vegetation that follows the corkscrew façade of the tower to create a truly unique office experience. This is by design. “A true double helix in shape and structure, this unique building will feature two walkable paths of landscaped terrain that will spiral up the outside of the building,” Amazon says, “featuring plantings you may find on a hike in the blue ridge mountains of Virginia.”

Aside from this careful planning of landscaping and local connection, the design also seeks to address a common complaint against massive office parks. Amazon explains that tech campuses are accused of creating isolated bubbles that are inaccessible to the rest of the local community; there is often a clear boundary where the campus begins and ends.  The company believes that they are breaking this tradition in this new design. “We are moving away from the campus to what we like to refer to as a neighborhood.” 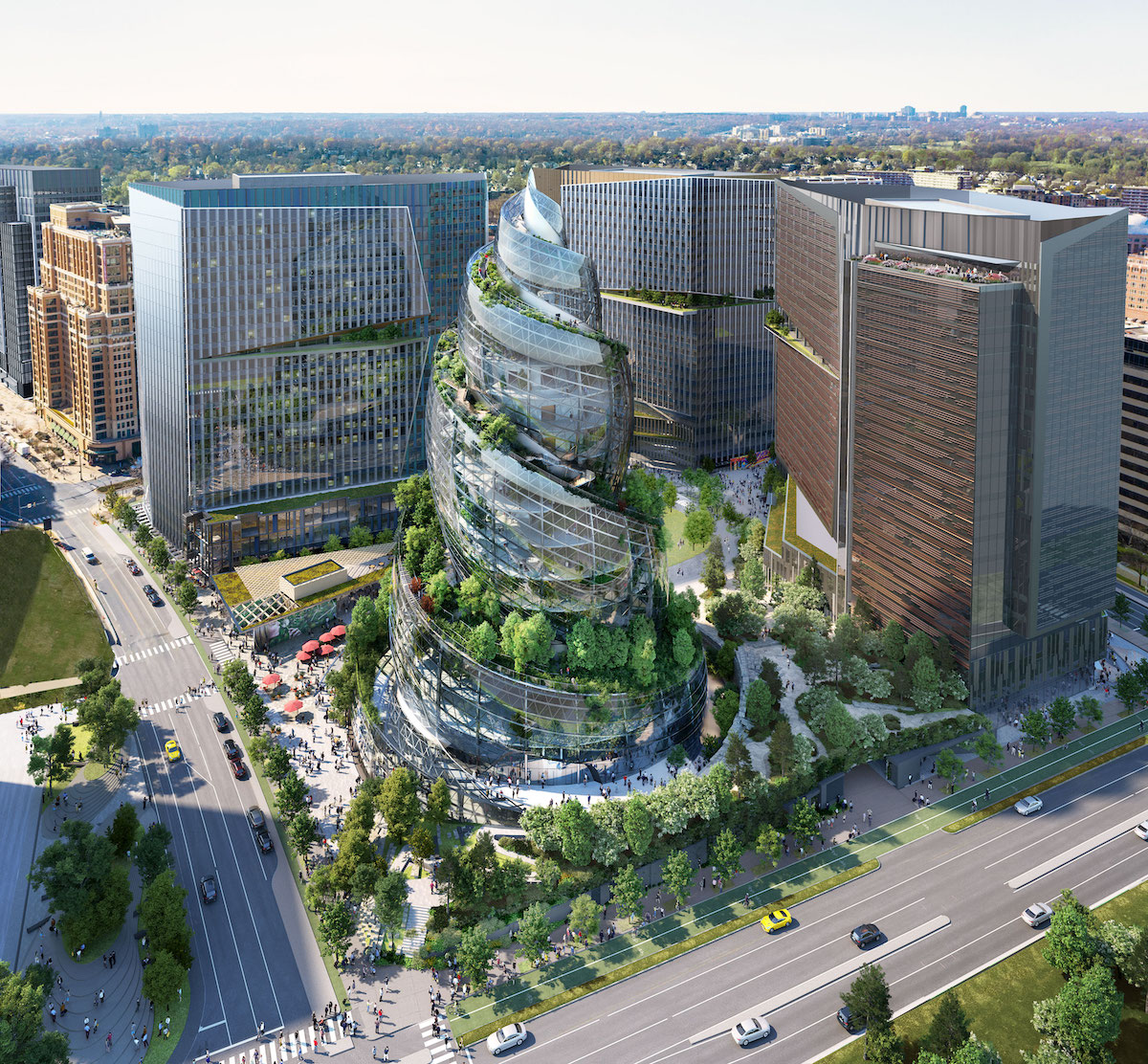 The technical requirements for the building include an impressive 2.8 million square feet of office space, a 250-seat outdoor amphitheater for events, and plenty of outdoor public space for farmers’ markets and other activities. It will be supported by a solar farm in southern Virginia and other sustainable building elements on the tower itself.

The outdoor programs are mainly planned for free public use and will be supported by food vendors and retail on the ground level of the tower. But The Helix will remain almost completely private, though Amazon plans to open up these spaces to the public at least two weekends of every month.

While The Helix has some interesting design goals in how they connect workers to nature and connect the neighborhood to the campus, the most significant benefit is the addition of 25,000 jobs. Despite pushback from other potential locations, Virginia offered large tax breaks that solidified Amazon’s decision to build the new headquarters in Arlington. Some locals remain divided on the project, but the company hopes their planned public space and more open approach to a “tech campus” will help The Helix become an important part of the community.

Architecture firm NBBJ has unveiled renderings of the newest Amazon headquarters designed as a helix tower covered in trees. 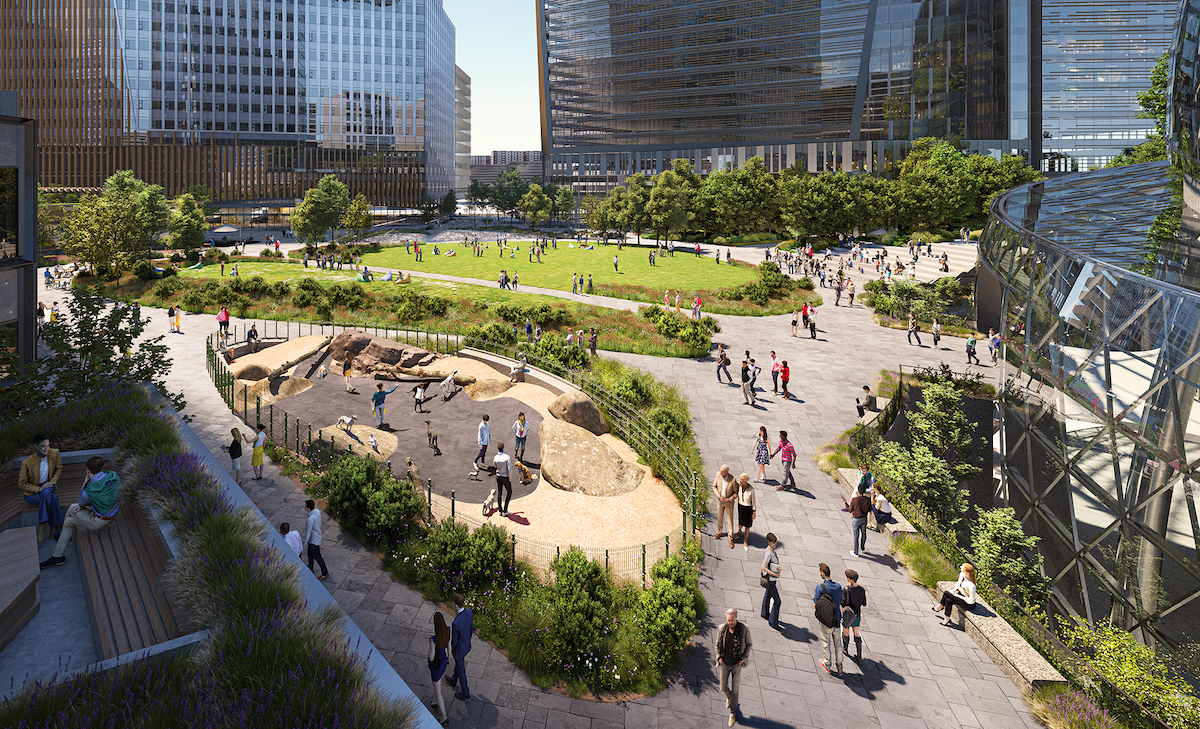 While many tech campuses may act as isolated areas, Amazon believes this new design will be better integrated into the community. 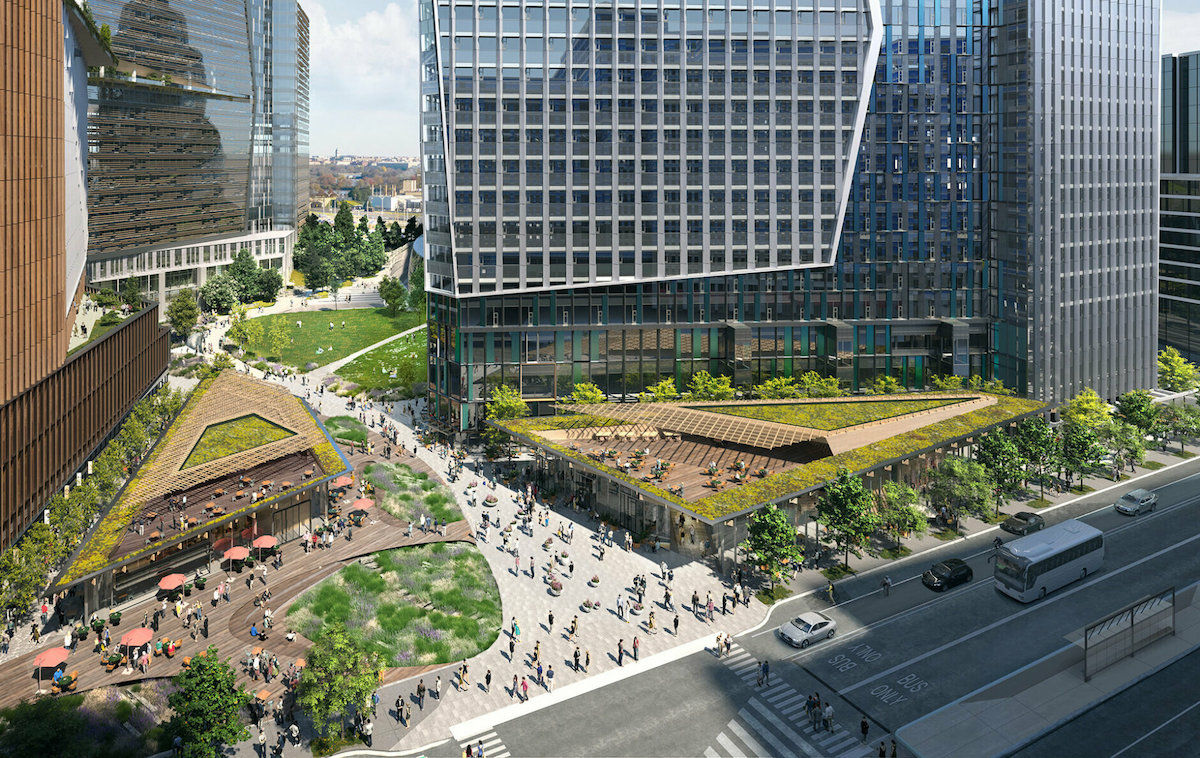 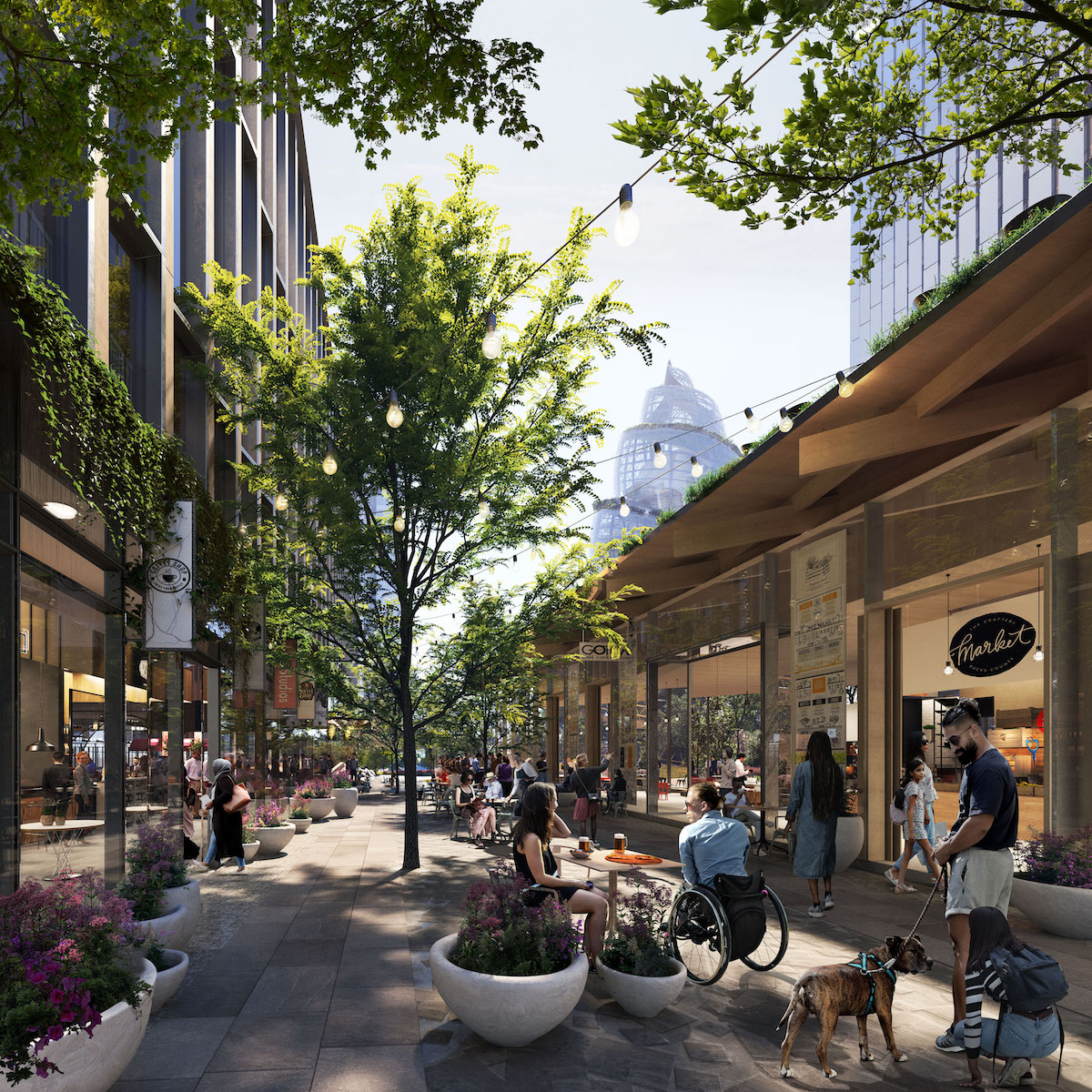 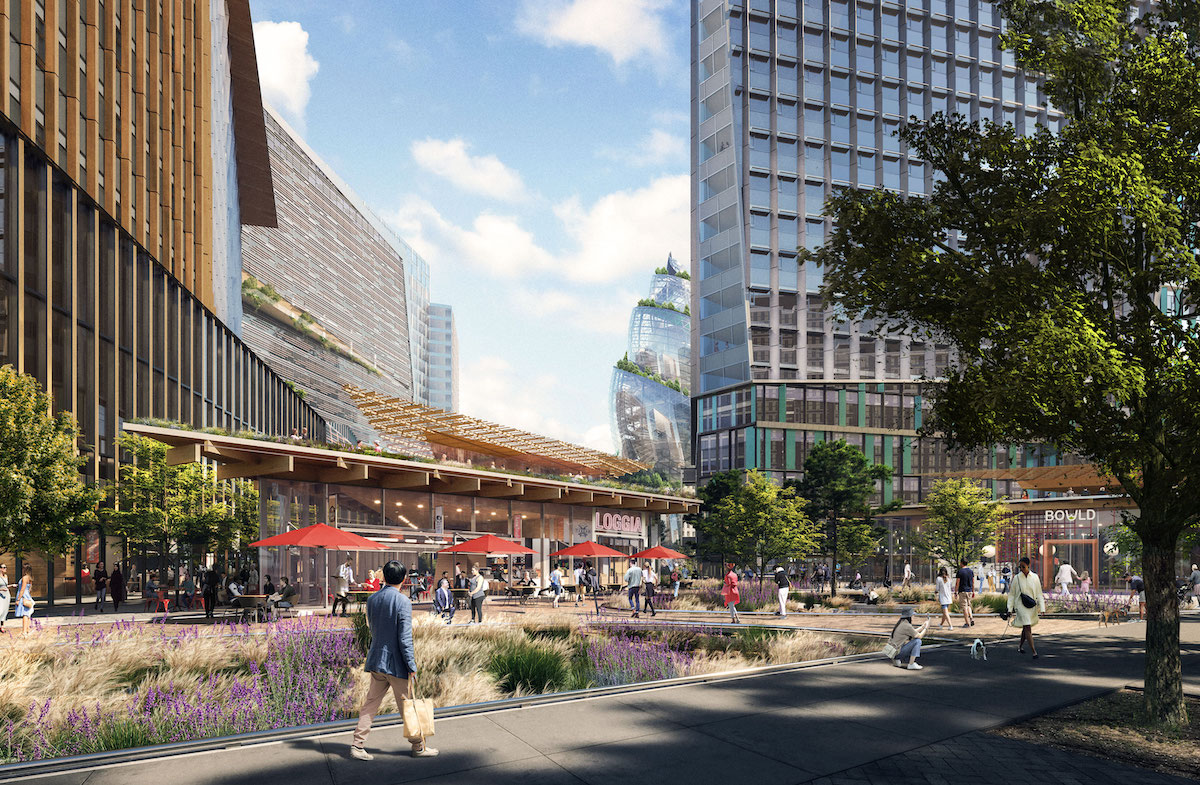 All images via NBBJ and Amazon.

This Twisting Carbon-Absorbing Tower in Taipei Will Soon Be Completed

Would you work in this futuristic tower? Share
Like My Modern Met on Facebook
Get Our Weekly Newsletter
Become a
My Modern Met Member
As a member, you'll join us in our effort to support the arts.
Become a Member
Explore member benefits