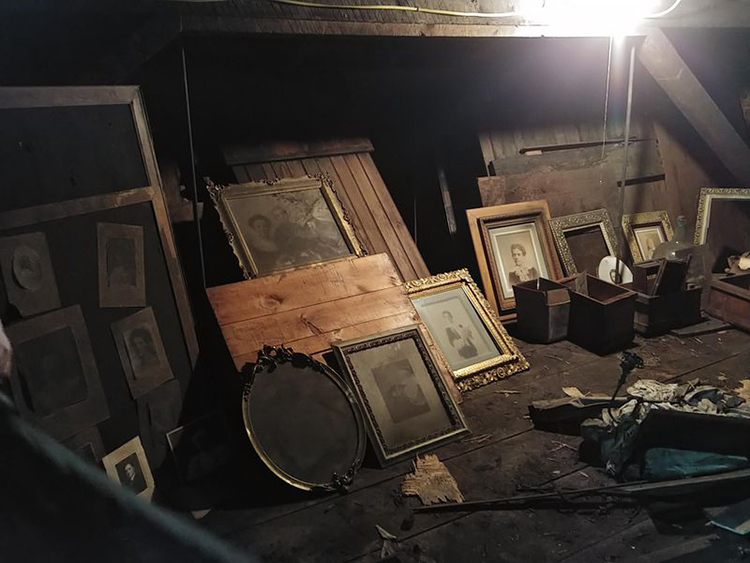 The studio equipment and images of James Ellery Hale lay in an attic in Geneva, New York for decades. (Photo: David J. Whitcomb)

The historic regions of upstate New York are excellent places to go antiquing—old treasures often turn up in unlikely places. For one antiques enthusiast, the find of a lifetime was waiting for him in the attic of a building he purchased in the small town of Geneva. A lawyer named David J. Whitcomb bought the older building to expand his law practice. While repairing a ceiling, the lawyer discovered a false surface under which was a trapdoor leading to an attic stuffed with the remains of a turn-of-the-century photography studio. Among the treasures of the attic are rare portraits of early suffragists, including Susan B. Anthony.

Whitcomb had no idea about the hidden attic when he purchased the Geneva building. His repair efforts upon an upper-floor revealed a hidden drop-ceiling. Curious, he piled some chairs and peaked his head through the trap door. Whitcomb told CNN, “The first thing I saw was a whole bunch of picture frames stacked together and these frames are gorgeous. They're the turn-of-the-century, they're gold, gilded, and they shone really bright and I was like ‘Oh my God,'” he said. “I lowered myself and said ‘I think we just found the Goonies treasure.'”

Whitcomb and a friend thoroughly explored the attic the next day. They found many incredible pieces dating to the late 19th and early 20th centuries. The attic harbored glass negatives, old prints, and large antique photographic equipment. It became apparent that the equipment had once belonged to a commercial portrait photographer. The name James Ellery Hale led Whitcomb to the Geneva Historical Society for more information. Thanks to the research of former president of the society Dan Weinstock, Whitcomb learned that Hale had lived in Geneva from 1892 to 1920. The photographer likely purchased Whitcomb's building around 1900. While it is unclear exactly when the attic and its contents were sealed off, neither of the former owners of the building (back to the 1960s) were aware of the attic's existence.

Of the images discovered in Hale's collection, many depict local people whose identities are largely shrouded in the intervening century of history. These include formal portraits of young women with Gibson girl aesthetics and group shots of local sports teams. Such images are valuable records of historic developments, including the early involvement of women in competitive sports. However, among the images are several well-known faces. Hale photographed several important women within the suffragist movement—upstate New York was a hub of suffragist activity. Whitcomb believes one of the images depicts Elizabeth Cady Stanton, a staunch leader of the movement from its early days.

The most significant find among the images is a large print of Susan B. Anthony. The image was taken by Hale himself in 1905, the year before Anthony passed away. The image—depicting a woman who led the fight for women's rights for decades—has long been widely known. It is considered Anthony's official portrait, as Hale gave the copyright to the Susan B. Anthony Memorial Association. It is also an image on file with the Library of Congress. However, the discovery of this original print by the photographer himself is monumental. Whitcomb also reports that he discovered the corresponding original glass negative. Broken into many pieces, it is yet unclear if it can be reconstructed.

Whitcomb has consigned the treasures of his attic to the auction house One Source Auctions & Antiques in Canandaigua, New York. The pieces will be conserved and eventually offered for auction. Whitcomb has kept several of his favorite pieces; he can expect a windfall from the rest of the collection. The Susan B. Anthony images are expected to sell for between $10,000 and $50,000. The whole collection is valued at around $100,000. To make this important discovery available to all, the auction house and Whitcomb have collaborated on a Facebook page which will post highlights and discoveries from within the collection. Surely, there are even more hidden gems among the masses of antique material.

You can follow the E Hale/Susan B Anthony Collection to stay up-to-date on this time capsule of history. For even more images, you can check out the photos taken by staff photographers for the Rochester’s Democrat and Chronicle.

Lawyer David Whitcomb was not expecting to find a treasure trove in a hidden attic of his new law office in Geneva, New York. 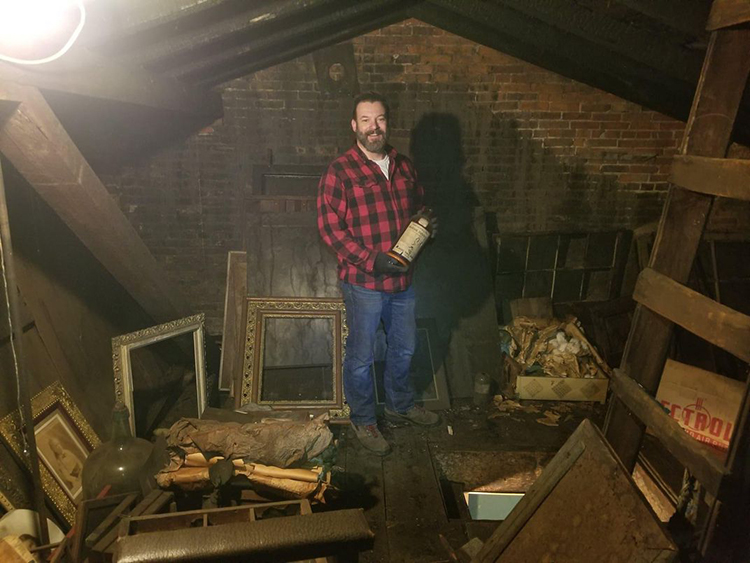 David J. Whicomb poses with the attic treasure he discovered.

The lawyer discovered a hidden drop-ceiling with a trapdoor. 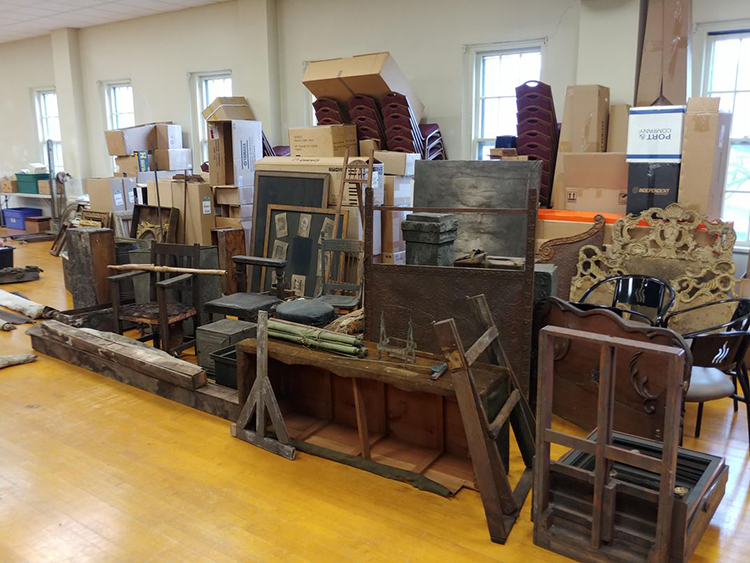 The equipment and photographs found are destined for restoration and auction.

In the attic was the contents of a turn-of-the-century photography studio which once belonged to James Ellery Hale. 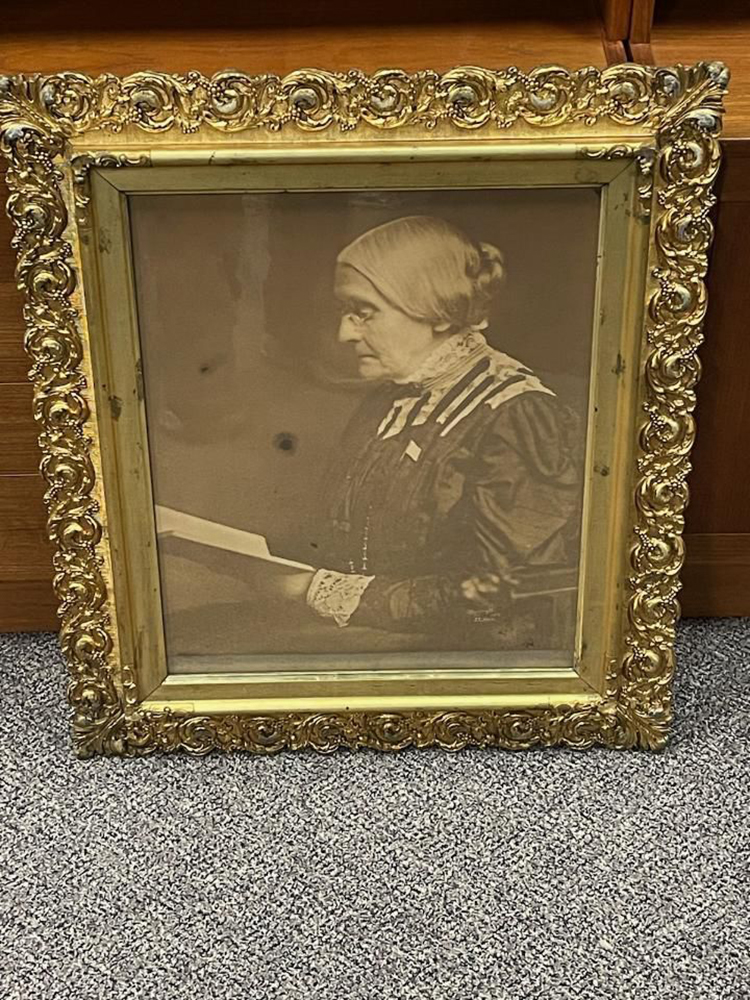 This portrait of Susan B. Anthony was taken by Hale, it has long served as her official portrait.

The Hale collection includes antique camera equipment, frames, and many photographs and negatives. 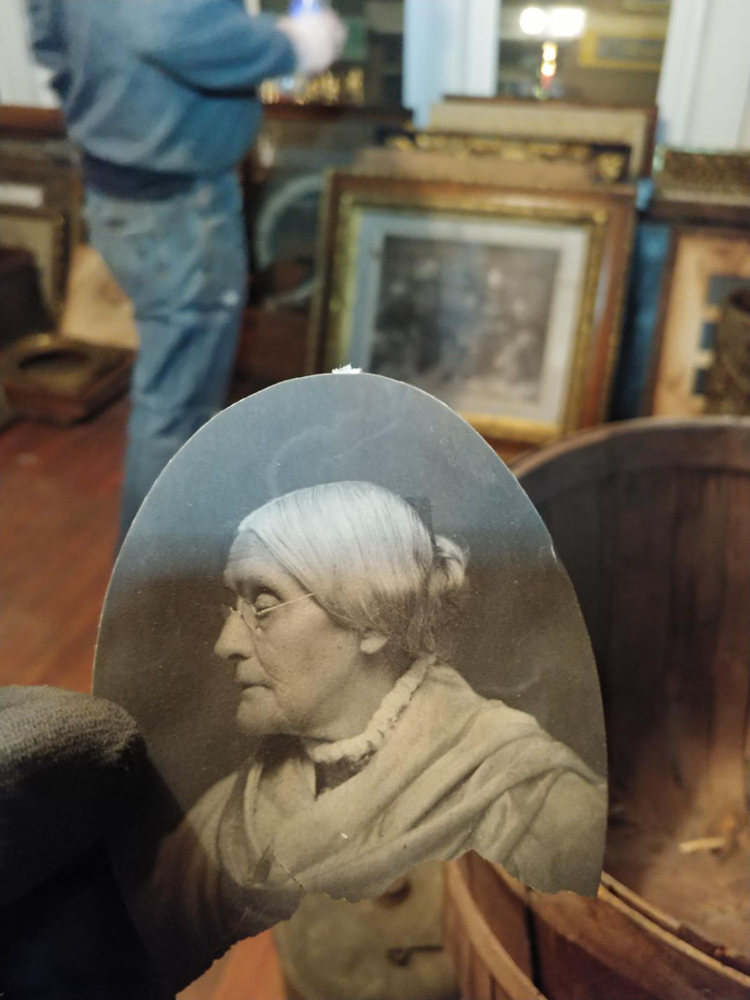 Another portrait appears to be a depiction of Anthony.

Among the images discovered are ones of suffragists such as Elizabeth Cady Stanton and Susan B. Anthony. 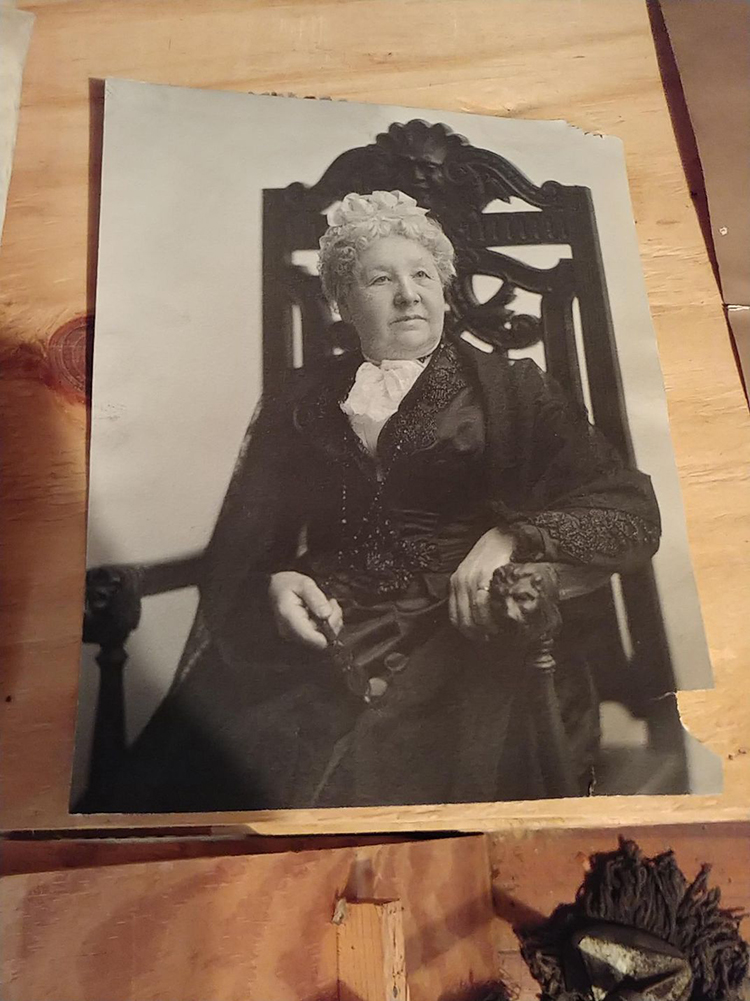 This portrait may be of the suffragist Elizabeth Cady Stanton.

The collection will be auctioned off, but you can follow along as new discoveries emerge. 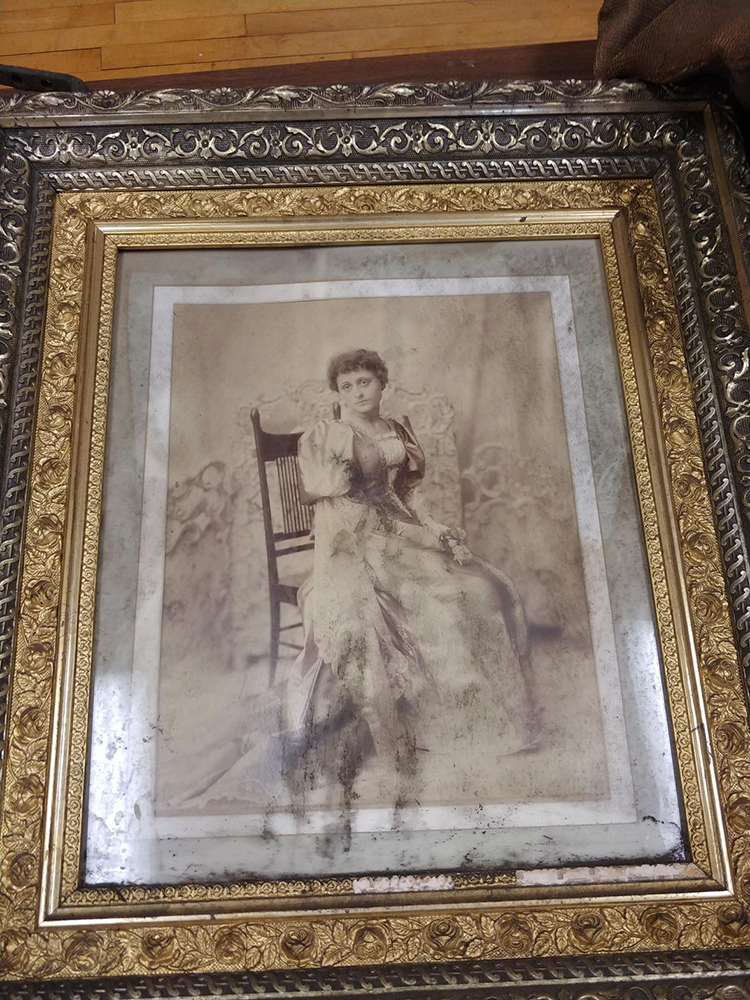 Many other commercial portraits of unknown sitters were also discovered. 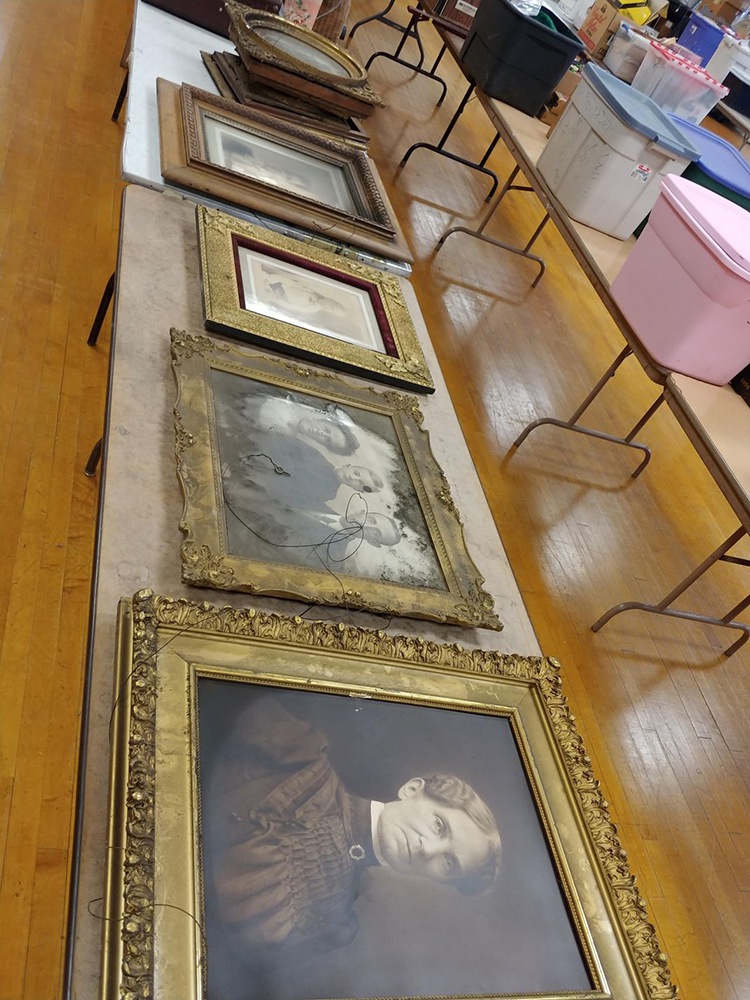 Experts at the auction house are beginning to identify the subjects of the found images.

My Modern Met granted permission to use photos by David J. Whitcomb.